Beginning Our Fiftieth Year — Thanks Be to God!

Beginning Our Fiftieth Year — Thanks Be to God!

If you took note of the cover of this issue of ourStandard Bearer when it arrived in your mail, you will already have noticed that there must be something special afoot with our magazine. And indeed there is! Perhaps you have already discovered the nature of this special occasion. For if you inspected the new symbol displayed on the cover, and looked carefully at the reproduction of the very first masthead ever used to identify our magazine, you will have discovered, too, that the occasion is the beginning of our fiftieth year of publication.

That in itself means that we have reached a milestone.

Actually, however, we of the Staff and of the Board conceive of matters thus, that we are now, as it were, running the last mile before reaching the more important milestone of the completion of our fiftieth year. That, if the Lord wills that we reach it, will be the Golden Anniversary of our Standard Bearer. And plans are already under way, through a joint committee of the Staff and the Board, to observe this fiftieth year in some way in all twenty-one issues of this year, yet so that the observance of this golden anniversary year reaches its climax, its grand finale, upon the completion of this volume-year, the actual Golden Anniversary.

Not only has the committee been laying plans; they have also been hard at work already. The anniversary symbol on our cover is evidence of this, for one thing. Some changes in the format of our magazine are further evidence. The Meditation appearing in this issue, and which we deem to be particularly appropriate and in keeping with the note which our magazine has always sounded, is also part of the anniversary-observance in this issue. As noted, it was the first meditation on the first page of the fast issue of the first volume; and it was written by one of the first editors, the late Reverend Herman Hoeksema. The committee plans to reproduce a worthwhile article from the past in every issue of this volume. And all the articles pertinent to this anniversary celebration will be marked by the little “50” symbol which is found at the head of this editorial.

The committee also asked your editor to devote a few lines to this anniversary-beginning, with which request I gladly hereby comply.

How does one observe an anniversary?

Naturally, one’s first inclination is to reminisce. And I could probably fill more than one page with such reminiscences: not only the more valuable ones which have to do with the treasures of theological and spiritual gold which may be found enfolded in those volumes which go all the way back to 1924; not only reminiscences of the history of its publication — the trials and tribulations through which Society and Board and Business Managers passed, as sometimes they desperately struggled to keep the Standard Beareralive and fiscally healthy, as in the time, for example, of the Great Depression. But also interesting anecdotes, as well as serious accounts, concerning the labors of those two “mighty men of valor,” Herman Hoeksema and George M. Ophoff, who for years and years wrote the lion’s share of the contents of our magazine. Oh, yes, I could reminisce. Not only can I do that by engrossing myself in the past volumes — and whoever possesses the volumes will know what I mean by that word “engrossing,” for one can intend to look up a single article, and in the process of doing so soon spend a couple of hours reading this or that article which is interesting, but which he never intended to read at the outset. But I can also tell many a tale from personal experience and observation. I am only slightly older than our Standard Bearer; and I have been directly connected with its publication for not quite half of its fifty years. But I lived as a son in the home of our first editor-in-chief during the early years of our magazine. My first memory goes back to the days when I was a little boy: I can still see my father and Rev. Ophoff and Mr. G. Van Beek gathered around our dining room table, pasting up a “mockup” of an issue as they used to do in those days. Or I can hear the clickety-clack of the old Remington Noiseless upon arising in the morning: for there were many “S. B. acticles” written in the “wee hours” of the morning before the family was awake. Or I can see my mother’s embarrassed blush when one of the late Rev. Gerrit Vos’s articles came “Airmail-Special Delivery” — right into the Sunday morning church service! I can still see the genial Rev. Vos, too, the next time he met my mild-mannered mother when he was on vacation in Grand Rapids. Rev. Vos was usually not at a loss for words; but for once he was stunned to silence when my mother “bawled him out” for disturbing her worship with his rush-article from Redlands, California. I can remember the rejoicing when the Standard Bearer met with glad acceptance even in other parts of the world; I can also remember the dejection of its editors when upon occasion our magazine met with reproach and rejection from supposed supporters. Yes, I can tell many a story . . .

But reminiscences as such are of not much worth. They may be pleasant, or they may be painful.

And they can be very carnal! For they can lead to boasting: and boasting on an occasion such as this would certainly be abominable in the sight of God.

How shall we observe this anniversary-year?

By saying from the heart: “Thanks be to our Covenant God!”

And what does that thanksgiving imply concretely?

First of all, it implies that we recount before Him, before one another, before our children, before all the public, His manifold mercies and blessings. The very fact that we have been enabled to publish for all these years is due only to His grace. He has provided the means, even when at times it seemed impossible to continue. He has provided the men — all through the years — to write, to expound, to defend, to hold fast the heritage once delivered unto us, the heritage of the Reformed faith. He has provided the readers, the loyal supporters, the willing givers. Yes, indeed, He has made all things well! It is of the Lord’s mercies that we were not consumed long before we ever reached this anniversary year! Thanks be to God!

But even then we have not touched on the most important element. To reach the fiftieth year of publication is wonderful, but only because as we begin this fiftieth year, we do so without any essential change from what we were in the first year of our publication, do so with the same Reformed stance as in 1924!

We have not changed!

Our Standard Bearer today bears the standard, the flag, of the truth, even as it did in its very first issue. Yes, there have been many changes: changes of format, changes of personnel, changes of readership. Not only so, but there has indeed been change in theStandard Bearer, in the sense that we have not stood still. There has been progress. There has beendevelopment. But the progress and development have been a following of the same banner of the truth of God’s Word and of our Reformed Confessions which was held high from the very beginning of this venture of faith. This was brought home to me forcibly on a Sunday evening not long ago. After serving as a guest preacher in one of our pulpits, I stopped to chat a few moments with two of the “old-timers,” men of the first generation of our churches. One was in his eighties, the other in his seventies. I love to listen to these men; they have insights gained from years of experience. Somehow the conversation turned to the subject of our churches and their heritage. And these two brethren testified as they thought back upon the years: “We have not changed! Our churches are the same in their doctrine and their preaching as they were fifty years ago.” They were right! And to hear these elder statesmen of the church say this was music in my ears! But then another brother joined in the conversation, a man of my own generation. And he said: “Yes, but we have not stood still!” “No,” said the two brethren, “we have not stood still. We have developed, but we have developed in the line of the truth.” And that was music in my ears, too!

But remember this: that we have not changed is not due to us. No, it is because the Lord has not changed. Great has been the faithfulness of our Covenant God!

Let us recount the lovingkindness of our God, and say, “Thanks, Lord, for Thy unchanging faithfulness and for Thy preserving grace. All the thanks and the praise be only to Thy Name!”

May God give us grace to hold aloft, especially in this day of fierce battle against the powers of darkness and the lie, the banner of the truth of His sovereign grace and His everlasting and faithful covenant.

All the thanks and the praise be to His Name alone! 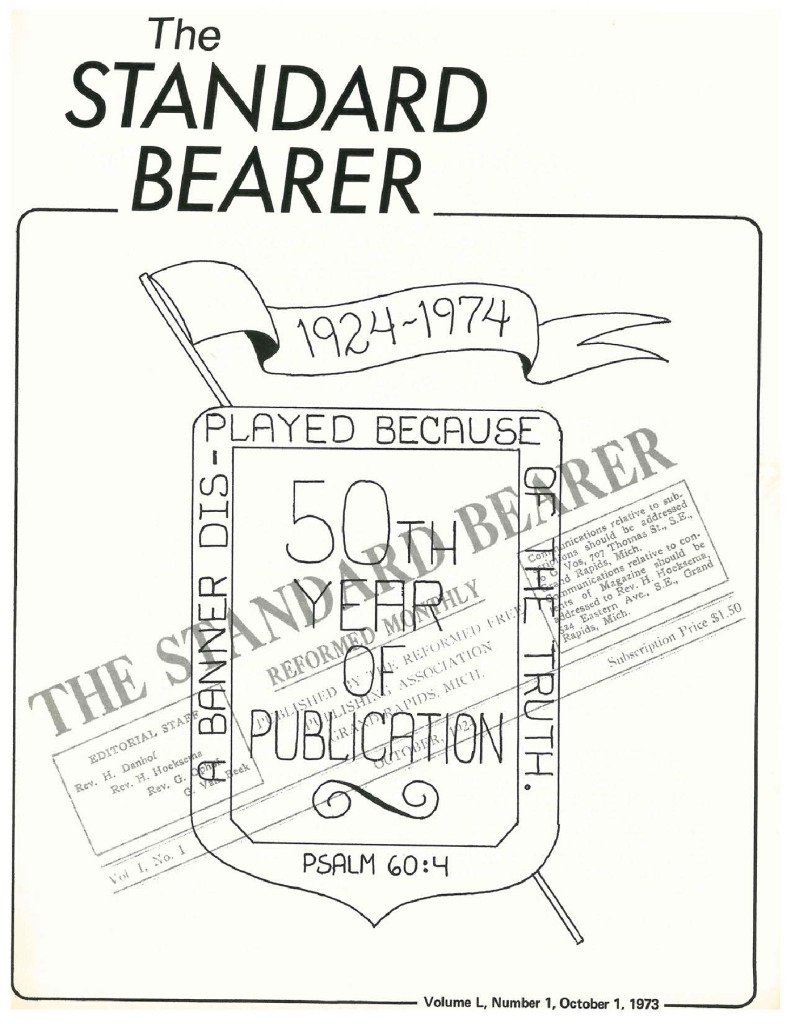