“But as many as received Him, to them gave He power to become the sons of God, even to them that believe on His Name.”  John 1:12

Concerning the text itself, there are especially three things that merit our attention.

First of all, it should be clearly noted that the text is introduced with the conjunctive word “but,” which indicates that the Word of God here stands in contrast to the preceding context. In that context the apostle wrote of Christ’s rejection, first of all by the world of darkness, which “comprehended Him not” (verse 5), and which “knew Him not” (verse 10). In verse 11 the apostle describes Him coming into a smaller circle, namely, that of His “own things”—the more intimate circle, where He also was rejected and cast out. But now, according to the text, in spite of what appeared as universal rejection, there were those who received Him. Not only were there those of His own who received Him, but also among the nations of the world. By a wonder of grace there are some in Israel and among the nations who received Him. Though the Scriptures, as in the text, describe them as the remnant that are saved, they are also described as a great host which no man can number.

Secondly, we should note the pronouns, “Him,” “He,” and “His” in the text. The antecedents of these pronouns, that is, the names to which the pronouns refer are: “the true Light,” “the Light” (verses 8, 9), “the Life” (verse 4), and still farther back “the Word” (Logos) (verse 1). And when you look ahead to verse 14, you discover “that the Word was made flesh, and dwelt among us.” And this can refer to none other than the Son of God incarnate, the Person of the Son of God become flesh. Our Lord Jesus Christ! He is the one Who is received, and He it is Who gives power to become the children of God.

With these thoughts in mind, we consider now the truth of the Word of God here, that power is given to become the children of God.

That is, of becoming children of God!

Though it is true that the Scriptures also speak of becoming sons of God, this is not what the apostle tells us in the text.

The apostle Paul in Galatians 3:26 writes: “For ye are all the children of God by faith in Christ Jesus.” The word “children” here is properly “sons.” Again, in Galatians 4:5, 6, the apostle speaks of the “adoption of sons,” and “because ye are sons.” And when the Scriptures speak of our sonship, as they do also in other places, they relate to the idea of adoption, through which we are brought into the family of God in a legal sense. Reverently speaking, God has only one natural Son, the Only Begotten of the Father, full of grace and truth. If He is to have any other sons, it must be through the way of adoption; and our adoption papers, so to speak, are written with a pen of blood, the blood of His Only Begotten Son. When, on the other hand, the Word of God, as in our text, speaks of the children of God, it reflects on their regeneration, their having been born again from above, of their partaking of His image. Not, you understand, in the essential image, for only the Son has the, expressed, the essential image of God (Heb. 1:3); but in the created image, so that in a creatural sense we partake of the image of God. Into that image we are transformed by the Spirit of regeneration, and in principle are become the children of God. God is our Father, and we partake of His likeness spiritually.

This wonder of grace could never happen in a natural way. Who ever heard of adopted children taking on them the image of those who adopted them? Those who aspire to parenthood through the legal means of adoption may try when they choose the children they adopt to pick out those who more resemble themselves. Most generally, however, they discover after while their disillusionment. Neither in looks nor in nature do their adopted sons and daughters resemble them. But, through a wonder of grace this is quite different when God adopts His sons and daughters. Through the grace of regeneration they are born again from above in His image and likeness—not in the similitude of Adam, who was created in the image of God but through sin lost that image, and we with him, but in the similitude of God’s Son, which image cannot be lost.

Moreover, when the text speaks of our becoming the children of God, it considers this becoming a process, something that is held before us in prospect.

As many as received Him, to them gave He power to become the children of God.

The New Testament Scriptures use especially two words to denote power. Avery common word is that from which our English words dynamic, dynamo, and dynamite are derived. It refers to power in the sense of ability and strength, energizing power, which enables one to accomplish something. The other word, the word used in our text, is properly translated by such terms as authority, the right of claim.

Sometimes these two words are used together, as for example, in Acts 1:7, 8. There we read: “And He (Christ) said unto them (His disciples), it is not for you to know the times or the seasons, which the Father hath put in His own power (authority). But ye shall receive power (ability), after that the Holy Ghost is come upon you. . . .” It should be plain from the first part of this text, that to know and determine the times and seasons resides singularly within the authority of God and His right to govern. While in the last part of the text the Lord says that power, that ability, is to be given also unto the disciples after the Holy Ghost is come upon them; that is, the Holy Spirit will enable them also to discern the times and seasons.

In our text, however, the apostle does not use the word for power that signifies the power of ability and strength, but he uses the word which clearly signifies power in the sense of authority, and especially the right of claim.

Power given by God!

They who receive Christ and lay claim to their becoming the children of God, do not have this power of themselves, but it is given to them of Christ.

A little later in the Gospel of John (John 8), we learn that the Jews of Jesus’ day laid claim to this power by nature. They asserted that they were the children of Abraham, and that God was their Father (John 8:33, 41). Jesus admitted that they were Abraham’s seed (John 8:37); however, as He pointed out to them, if they were truly the children of Abraham and children of God, they would do the works of Abraham (John 8:39). Further, He asserted, if God was their Father, they would love Christ, and recognize that He came forth from the Father. This, they did not do. Thus they showed not only that their claim was false, but that truly they were the children of the devil (John 8:44). This context shows plainly that while they laid claim to being the children of God, they nevertheless had no right to this claim, as their works testified.

This false Jewish claim is implicit in all present day Modernism and in all Arminianism preached in our time. It is most important that we understand this. Whether with Modernism one believes that all men are by nature children of God, or with Arminianism one believes that it lies within the power of all men to accept Christ proffered in the gospel, both lay claim to that which is untrue.

As the Word of God in our text clearly states, the power, that is, the right to lay claim to becoming children of God, must be divinely given. It is a power of God in Christ, and given only to those who are truly the children of God.

This implies, first of all, that when they received Christ, He must first impart Himself unto them. It implies, in the second place, that only after He has given power to become the children of God, do they consciously appropriate Him, and believe on His Name.

We strongly object to the interpretation of those who would maintain on the basis of our text that our reception of Christ or our believing on His Name is the condition we fulfill, in order to become the children of God. In the first place, faith is not that which is inherent in every man; rather, it is a gift of God (Eph. 2:8). Nor is it ever a condition man fulfills, in order to obtain something of God. But it is always presented in Scripture as the means and the way through which God applies unto us His saving grace. That we receive Christ and believe on His Name, is implicit in the power given to become the children of God. God is first, not man—in order that of Him, through Him, and unto Him, may be all the glory (Rom. 11:36).

Indeed, they who are given power to become the children of God, receive Christ, and they believe on His Name; that is, the revelation of Christ as presented in the gospel. This is precisely the appointed way to their becoming the children of God. Only when the gospel is purely preached is Christ revealed unto us. And only as He is properly presented to us, is His image truly reflected to us, and we are transformed into that image.

What a marvelous way in which God in Christ makes us to become more and more the children of God!

It belongs to our becoming children of God therefore, not only that we receive Christ, appropriate Him as our own, as He is presented to us in the Word, and not only that we believe on this revelation of Christ, through which we are transformed into the children of God, but, as John informs us in his epistle (I John 3:2), that we purify ourselves as He is pure. This is, indeed, the transforming process God uses to make us to become His children. Proper preaching of the Word must also cause us to walk in the way of sanctification, without which no man shall see the Lord (Hebrews 12:14).

As was said, this transforming process goes on in us until we shall see Him face to face.

From the moment of our regeneration unto the moment we shall see Him, we are being changed by the power of God in Christ into those children who will appear exactly as He is, and as His children shall with Him constitute the family of God.

Then the covenant of God shall be realized, the object of His eternal good pleasure! 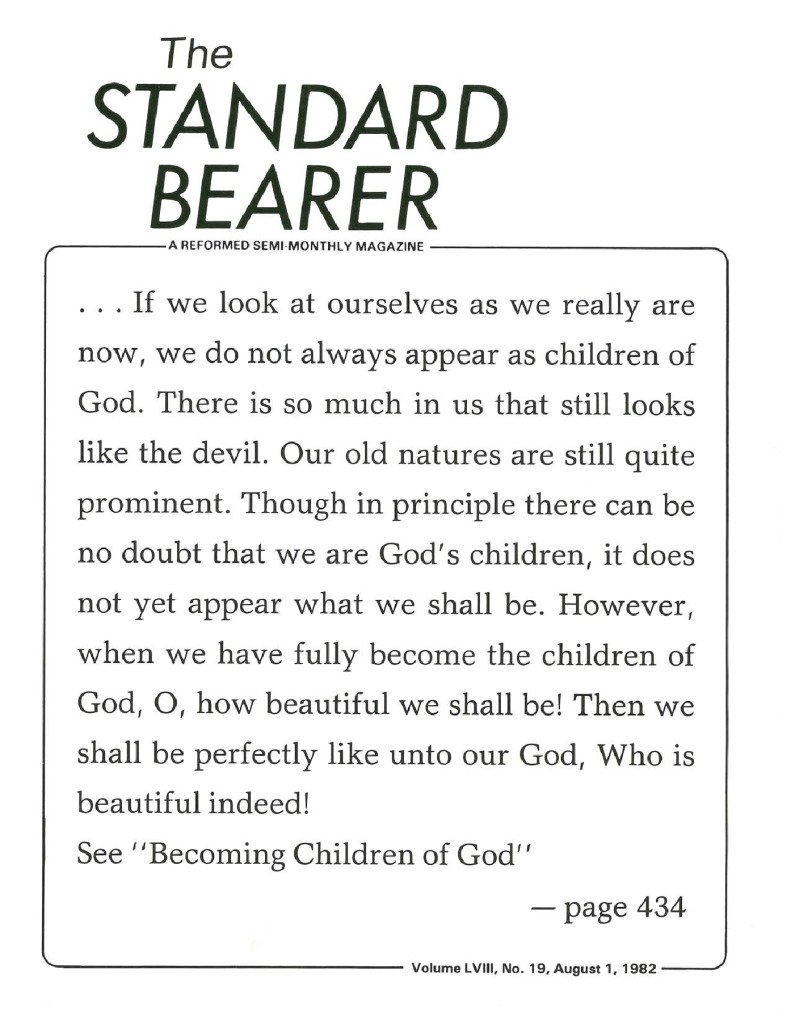