Nine years ago the undersigned was sent with Mr. Harry Zwak to our mission field in Jamaica, that beautiful island in the Caribbean Sea. Our labours were at that time with three ministers who were serving twenty churches. The date of our arrival was April 20, 1965.

On April 16, 1974 the undersigned with the Rev. C. Hanko landed at the Montego Bay airport, being sent by the same Mission Committee to the same field of labour. But there were marked changes in the field. When we arrived, there were only two ministers serving only nine churches. Yes, the two-edged sword of the Word cut both ways. The seed sown did not always fall on good soil. It fell also on the pathway, among thorns and thistles and on rocky ground — of which there is so much literally and figuratively in Jamaica. More churches left us than remained with us. More individuals turned from the truth than cried for us to preach it in their midst. As is the case in our own land — and we are a handful of churches in the midst of a tremendously big Arminian church world — so there, a small remnant of the twenty churches continued to hold fast to the truth. And even as we are not at all surprised in the areas where our churches exist to find fierce opposition to what is truly Reformed, so there we ought not to be surprised that only a few want to hear a truth that had never before been proclaimed on their island. The positive fruit has been small, and this should not amaze us in light of our own history here in the States. But there is fruit there; and we still have an open door which God has not closed,and we dare not close!

But to continue the line of thought we were following — nine years ago we worked with three ministers and in twenty churches. When we arrived on April 16, 1974 we contacted two ministers and nine congregations. Yet when twenty-one days later, on May 7, 1974, we boarded our Air Jamaica jet for Chicago and Grand Rapids, there were six ministers serving these nine churches. Surely a word of explanation is in order.

Through the foresight of our missionary to Jamaica, the Rev. George C. Lubbers, four young men were trained for the ministry of God’s Word for the Protestant Reformed Churches in Jamaica. Young men who themselves are Jamaicans, who understand the Jamaicans, who have at their finger tips Jamaican illustrations and examples for their sermons, who know the Jamaican way of life and the Jamaican language (this will become plain in a moment) were indoctrinated in the truth of God’s Word as it is so richly and beautifully expressed in the Reformed Creeds. And they received that truth into their souls and echoed it in their prayers and speech.

In December of 1973 they were graduated and declared candidates for the ministry of God’s Word and eligible for calls. On April 23, 1974 in our presence, and in the presence of the veteran ministers, Rev. Joshua E. Frame and Rev. Clinton J. Elliott, as well as elders from the nine churches, and as many other men and women who could be there, these four young men preached their sermons in the church at Lacovia on the southern side of the island.

They were limited to a twenty minute sermon each, and were given the choice of an Old Testament or a New Testament text, having been assigned one of each. Kenneth Brown, who had received the call from the congregation at Fort Williams, preached first. Having been given the choice of Psalm 103:11-12 or Matthew 7:24-27 he delivered his sermon on Psalm 103:11-12. In his sermon he revealed his love for the Reformed Faith and in particular for the truth of sovereign election and particular atonement, as well as the fact that he had received the instruction given him that he was to get his material out of the text, when he called our attention to the fact that the pronouns our and us in the text exclude many and teach that God has mercy only for the elect, and has removed as far as the east is from the west only the transgressions of His people chosen in Christ from eternity.

Leonard Williams, who received the call from the Belmont congregation, chose Romans 8:31-32 rather thanPsalm 139:23-24. And here we will quote a few lines from his sermon, “Can the world harm us, since God is for us? Can the wicked enemies of ours overthrow God’s eternal counsel and plan of redemption and election towards His people whom He has chosen in Christ out of His mere grace from before the foundation of the world?” Speaking of that sovereign eternal election he waxed exuberant and his face lit up with the joy of it when he cried out of God, “He is my all in time and in eternity!”

Trevor Nish, who was called by the Lacovia church, preached on Matthew 6:33 and pointed out with conviction in his voice that, “only those whom God has made alive in Christ can seek the kingdom of God. A dead man cannot walk or seek; and man is by nature spiritually dead and must be made alive by God before he can seek the kingdom of heaven.” And he showed how qualified these young men are to preach to the Jamaicans in the language of the Jamaicans when he pointed out and warned his people against the “Obeah man.” These men are men of male witchcraft or sorcery on the island, whose antics and procedures, though condemned by the government under penalty of severe fines, still creep into the churches. Native ministers know the ins and outs of the objects used and the methods followed by the Obeah men, and brother Trevor was revealing that he intends, by God’s grace, to be a practical minister, not given to dead dogmatic preaching but to warning his people of the evils very near them, as well as to instructing and comforting them with God’s Word.

The last to preach was Alvin Beckford who had been called by the Cave Mt. church because, as one of the elders stated, “He preaches the truth of God’s Word.” This does not mean that the other three candidates did not and that Rev. Elliot and Rev. Frame did not, but they wanted brother Beckford for the truth that he preached. In his sermon on Luke 18:9-14 he stressed the greatness of our God, the folly of the Pharisee in thinking that he had helped a God Who needs no help, but whose help we need, and whose help the publican sought in his prayer for mercy as a sinner. Such, he told us, go home assured of being justified, while those like the Pharisee go home with the wrath of God upon them.

What a day it was! I could not help but wish that my congregation, which so graciously and often had allowed me to go to Jamaica (five times in seven years) could have been there to feel the enthusiasm of these young men, to enjoy their preaching which seemed to come out of their hearts, and to hear these of another race speaking the same glorious truth (and with such conviction) that we hear from Sabbath to Sabbath in our churches.

And then came those days when on April 29 Rev. Kenneth Brown was ordained at Fort Williams; when on May 2 Rev. Trevor Nish was ordained in Lacovia; when Rev. Alvin Beckford was ordained on May 5 at Cave Mt. and when that evening, in the midst of a downpour of rain that made it necessary for us to leave the thatched roof “church” to have the service on the porch of a deacon of the congregation at Belmont, Rev. Leonard Williams was ordained. The veteran ministers, Rev. Elliott and Rev. Frame, ordained the ministers-elect. Rev. Hanko and undersigned took turns preaching the sermons. Touching (and the congregations were visibly moved) was the ceremony of the laying on of hands. So now there are six pairs of beautiful feet upon the mountains of Jamaica that preach glad tidings, who proclaim peace, who bring tidings of good things and proclaim salvation.

Continued in next issue 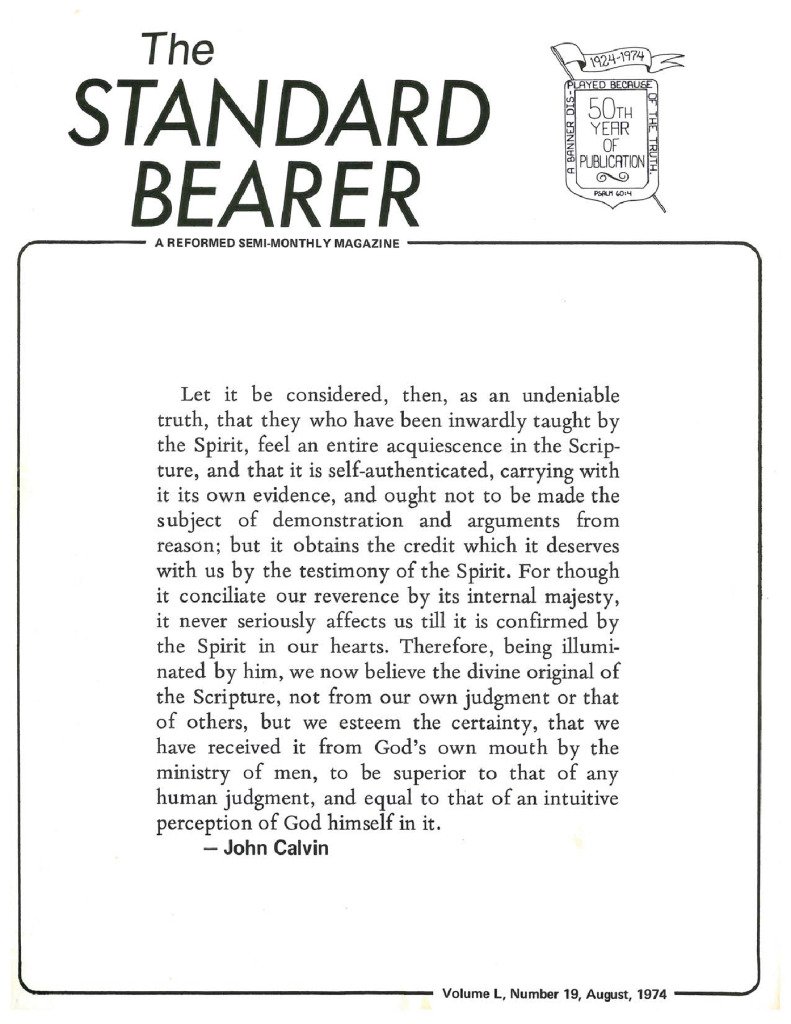