“. . . the right doctrine of Holy Scripture cannot claim abstract validity, but its confirmation must always be sought and found in exegesis and therefore in Holy Scripture itself” (CD, I, 2, p. 462).

Although Barth acknowledges that the doctrine of Scripture, like all Christian doctrine, must be an expression of Scripture’s own teaching, and although he also makes an attempt to prove his doctrine of Scripture from the Scriptures, he reveals himself to be guilty, nevertheless, of ignoring and disobeying the Reformed, Scriptural rule that Christian doctrine is not the Church’s notions imposed upon Scripture but Scripture’s own teaching, elicited from Scripture by exegesis and formulated systematically. Barth’s verdict that Scripture is ‘a fallible, human book, full of errors, contradictions and legends, has not been arrived at by a submissive listening to Scripture’s judgment upon itself that it is the Word of God, that it came about by being breathed of God (II Tim. 3:16), that its human speakers and writers did not act on their own initiative but spoke from God, being moved by the Holy Spirit (II Peter 1:20, 21), and that it is unbreakable (John 10:35). Rather, Barth and those who agree with him carry out their own learned, thorough, but private investigation of Scripture, scrutinize and judge all the data in the Old and New Testaments independently of the rigorous claim of Scripture, to be the God-breathed (inspired) Word of God in its “entirety, and unsurprisingly conclude that the facts in the case fail to substantiate verbal inspiration and infallibility. This bad conclusion is the inevitable result of every attempt to formulate a doctrine of Scripture which bypasses Scripture’s testimony about itself, about its “apparent legends,” about its about its “apparent theological errors,” “apparent contradictions,” in order to determine, open-mindedly, what Scripture really is. This way to an understanding of what the Bible is has been closed to the Church once and for all. It has been closed by the simple fact that Scripture itself plainly states what Scripture is. The only way now to an understanding of the doctrine of Scripture is the way of a believing and very humble acceptance of Scripture’s description of itself. To try still to arrive at a doctrine of Scripture in any other way, for any reason whatever, is the disobedience of unbelief; that other way is a dead-end; the Church may not and will not go that way because it is not Christ’s will for her that she die.

When Barth finally does take note of what Scripture says concerning itself in the classic passages on inspiration, he is amazingly brief. The interpretation he offers of the passages, apart from its truth or falsity, is scanty. This extreme brevity with respect to the very basis of the doctrine is a grave, formal weakness of Barth’s doctrine of Scripture. The brevity at this crucial point indicates that the classic passages on inspiration do not have major importance in Barth’s doctrine of Scripture. What Scripture says of itself does not control everything from the very beginning; by the time we come to these passages the question has already been decided; all that remains as far as these passages are concerned is to show that these passages do not contradict the conclusion that the Scriptures are fallible words of men. In fact, one wonders whether Barth is actually serious when he dismisses the phrase, “all scripture is given by inspiration of God” (II Tim. 3:16), with the words: “a statement is made about the relationship between God and Scripture . . . which cannot . . . be expanded but to which only a—necessarily brief—reference can be made. At the decisive point all that we have to say about it can consist only in an underlining and delimiting of the inaccessible mystery of the free grace in which the Spirit of God is present and active before and above and in the Bible” (CD, I, 2, p. 504).

Barth does offer some explanation, however, of the passages in which Scripture speaks concerning its own origin and nature, especially II Tim. 3:16 and II Peter 1:20, 21. Because these passages and their meaning are and ought to be of crucial importance to us for the doctrine of Scripture, we must note what Barth has to say about them.

Barth recognizes that these two passages deal with the same subject, “the priority and character of Holy Scripture as such” (CD, I, 2, p. 504). He maintains also that, although the passages refer primarily to the Old Testament, they apply to the New Testament as well. His interpretation of these passages consists, in the main, of an explanation of the word “God-breathed,” (theopneustos), in II Timothy 3:16.

Concerning this word and the reality of inspiration it describes, Barth says the following:

1. The word, theopneustos, (“God-breathed”), as a description of the Holy Scriptures, means that “the whole Scripture is literally: ‘of the Spirit of God,’ i.e., given and filled and ruled by the Spirit of God,’ and actively out-breathing and spreading abroad and making known the Spirit” (CD, I, 2, p. 504). This definition of the word theopneustos is worthy of note since it shows that Barth allows the word to carry an active meaning, “God-breathing,” as well as a passive meaning, “God-breathed.”

2. The doctrine of inspiration is more a description of the writers of Scripture, than a description of the Bible itself. “Theopneustia in the bounds of biblical thinking cannot mean anything but the special attitude of obedience in those that are elected and called to this obviously special service” (i.e., the human writers-DE. CD, I, 2, p. 505). Barth comes very close, here, to saying that “inspiration” only means that the human writers of the Bible lived and wrote at the time when God revealed Himself, so that their writings can be regarded as rather reliable, eyewitness accounts by honest men. But he is quick to add that this special obedience was due to their being “surrounded and controlled and impelled by the Holy Spirit” (CD, I, 2, p. 505). In any case, their inspiration, their “special obedience,” does not mean that they were safeguarded from errors. On the contrary, inspiration is a miracle, the truth of which is that “here fallible men speak the Word of God in fallible human words” (CD, I, 2, p. 529).

3. Inspiration is not, as the Reformed Churches insist, to be limited to the production of the Scriptures. This is only one part of inspiration. Inspiration in its entirety includes two elements: 1) God’s revelation of Himself to the writers of the Bible and His “guidance” of them as they wrote. 2) God’s revelation of Himself to the readers of the Bible through the words of the human writers of Scripture. “This self-disclosure in its totality is theopneustia, the inspiration of the word of the prophets and apostles” (CD, I, 2, p. 516). In proof of this contention, Barth points us to

telling us to read

in the light of

This very peculiar extension of the doctrine of inspiration to include God’s revelation of Himself to the readers of the Bible may be due, in part, to Barth’s strong aversion to the notion that the natural man has ability to read and understand the Scriptures. Every man needs the inner work of the Spirit to know God by the Scriptures. But it is due as well to Barth’s equally strong aversion to any teaching of an inspired Book. Inspiration must be an event. There is “inspiration” at the moment that God flashes to me the knowledge of Himself through the human, fallible Bible. Otherwise, there really is not any inspiration, only an incomplete inspiration.

Does this interpretation of II Timothy 3:16 and II Peter 1:20, 21,even resemble the words of the texts? Is this explanation even an attempt to state the meaning of the words: “All Scripture is God-breathed”? 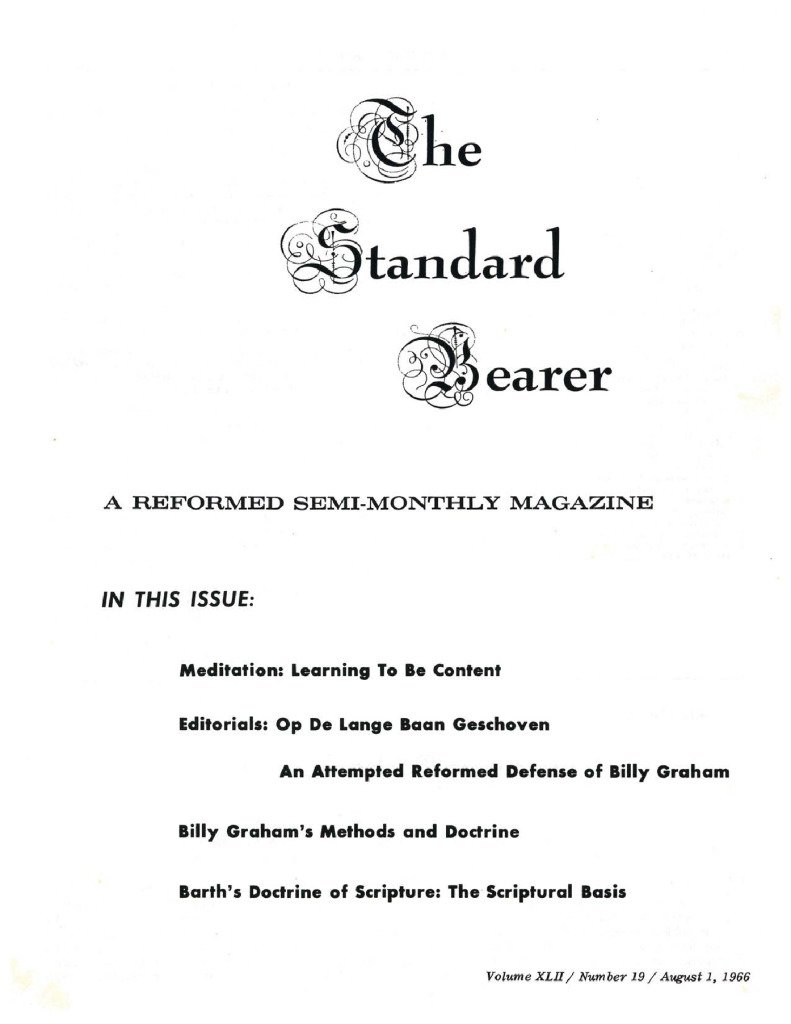