Baptism on the Mission Field (4)

Baptism on the Mission Field (4)

In this installment of our consideration of the Study Report we wish to return to the item which we by-passed earlier, namely the decision of the Synod of 1956.

First of all, let us quote what the Study Report has to say on the matter. Their mandate was “to take into account . . . the previous decisions of Synod, especially 1956.” In referring to this decision of 1956, the committee offers the following summation:

The Synod of 1956 approved of the labors of the missionary working in Loveland, Colorado “with the exception of his administration of the Sacraments.” The grounds adopted were: 1. That the administration of the Sacraments is contrary to the second duty mentioned in the Form for Ordination. 2. It is contrary to his being under the supervision of the Consistory of the First Church of Grand Rapids, Michigan. Article 7 of the Constitution of the Mission Committee.” (Acts of Synod, 1956, Articles 85, 86, 90-94.)

In connection with its discussion of the Form of Ordination of Missionaries, the Study Report has the following to say about this decision of 1956:

The Form of Ordination of Missionaries (pp. 74-76 in the back of the Psalter), rightly understood, charges the missionary with the duty of baptizing on the mission field, before and with a view to the existence of the instituted church. This Form was misunderstood by the Synod of 1956, which decided that “administration of the Sacraments is contrary to the second duty mentioned in the Form of Ordination” (Art. 91).

Finally, in its advice the Study Report has the following to say: “B. Synod declare that the Synod of 1956 erred in Art. 91, Ground 1 when it said, ‘That the administration of the Sacraments is contrary to the second duty mentioned in the Form for Ordination.'”

In considering this material, we should get the background of the 1956 decision, which is not furnished in full by the Study Report. Here it is:

1. Our missionary was at that time laboring in Loveland, Colorado, and was laboring in an already existing and instituted congregation, which, however, was not yet a Protestant Reformed Congregation. It was the Reformed Hope Church of Loveland.

2. According to a letter from the Consistory of that Reformed Hope Church which the Mission Committee included in its report, our missionary “has administered the Lord’s Supper twice, has baptized three of our children.” Acts of Synod, 1956, pp. 78, 79.

3. Neither the Advisory Committee nor the Mission Committee offered Synod any advice on this matter. But when this material was treated on the floor of Synod, the following decision was made:

Motion is made that we approve of Rev. Lubbers’ labors in Loveland as reported by the Mission Committee. See “I” of report. An amendment is made “with the exception of his administration of the Sacraments.” A motion is made to add the following grounds:

1. That the administration of the Sacraments is contrary to the second duty mentioned in the Form for Ordination.

2. It is contrary to his being under the supervision of the Consistory of the First Church of Grand Rapids, Michigan, Article 7 of the Constitution of the Mission Committee.

An amendment is made to add “and with the exception of pronouncing the blessing.” Ground: The official blessing and benediction is only and exclusively laid on an organized congregation, and under the supervision of a local Consistory. Proof: all the benedictions in the Old and New Testaments are laid upon the organized church of Christ. Carried.

I quote all of this material in full because it sheds a little different light on the subject than one might gain from the partial quotation in the Study Report. From a strictly formal point of view I am not greatly in love with the decision of 1956. You see, it was one of those decisions which was hatched out on the floor of Synod. Our past leaders, such as the late Revs. Hoeksema and Vos, were rather adept at these “floor” decisions. And at the time they were made, very often they were correct, too; and usually they would be clear to those who were present at Synod. The trouble is that because of their brevity they are often not clear to posterity, except by way of looking up all the background, etc. That is why synods do well to commit such problems to advisory committees for full and careful formulation. Nevertheless, I am essentially in agreement with the decision, as I was when I was a delegate to the 1956 Synod. And in connection with the Study Report and the above data, I wish to point out the following:

1. The Study Committee, it seems to me, went beyond its mandate. The mandate was to take into account this decision of 1956. The Study Reportpasses judgment on the 1956 decision, and even recommends that Synod declare it to be in error. Moreover, in the advice of the Study Report no grounds are offered for declaring it in error.

2. It should be carefully noted that this decision was taken in a concrete case. Synod of 1956 did not simply declare that all administration of the sacraments on the mission field was improper. But it referred to the situation as described above. What was that situation? This: 1) there was an organized congregation. 2) However, that congregation was not yet a Protestant Reformed congregation.

3. In this light it is plain that the Synod of 1956 understood the Form for Ordination in the same way as I have explained it in my earlier articles on this subject, namely: if it please the Lord to make thy work fruitful unto the gathering of a congregation, i.e., a Protestant Reformed congregation, then the missionary may and must baptize. In addition, Synod offered the ground that a minister may not without authorization place himself (in preaching and administering the sacraments) under the supervision of a non-Protestant Reformed consistory.

Finally, I wish to point out that there is a vast difference between what the Form states and that the Study Report states.

1. The Form places a limitation, a condition, on the missionary with regard to baptism: “. . .IF it pleases God to make thy work fruitful unto the gathering of a church. . . .” The Study Report in effect changes this to a statement of purpose: ” . . . with a view to the existence of the instituted church. . . .” These two are by no means the same.

2. The language of the form is objective: it points objectively to the proper circumstances under which a missionary has the duty of administering baptism. The language of the Study Report, it seems to me, issubjective: it seems to me to speak only of the outlook or the purpose which the missionary has in mind when he baptizes. No one knows whether or not a church will be instituted. But the missionary must have this in mind in baptism: it is “with a view to the instituting of a congregation,” but this instituting of a congregation is not certain, it may be possible, may even be probable, but may also be improbable or doubtful. Again, the language of the Study Report and that of the Form are obviously by no means the same. 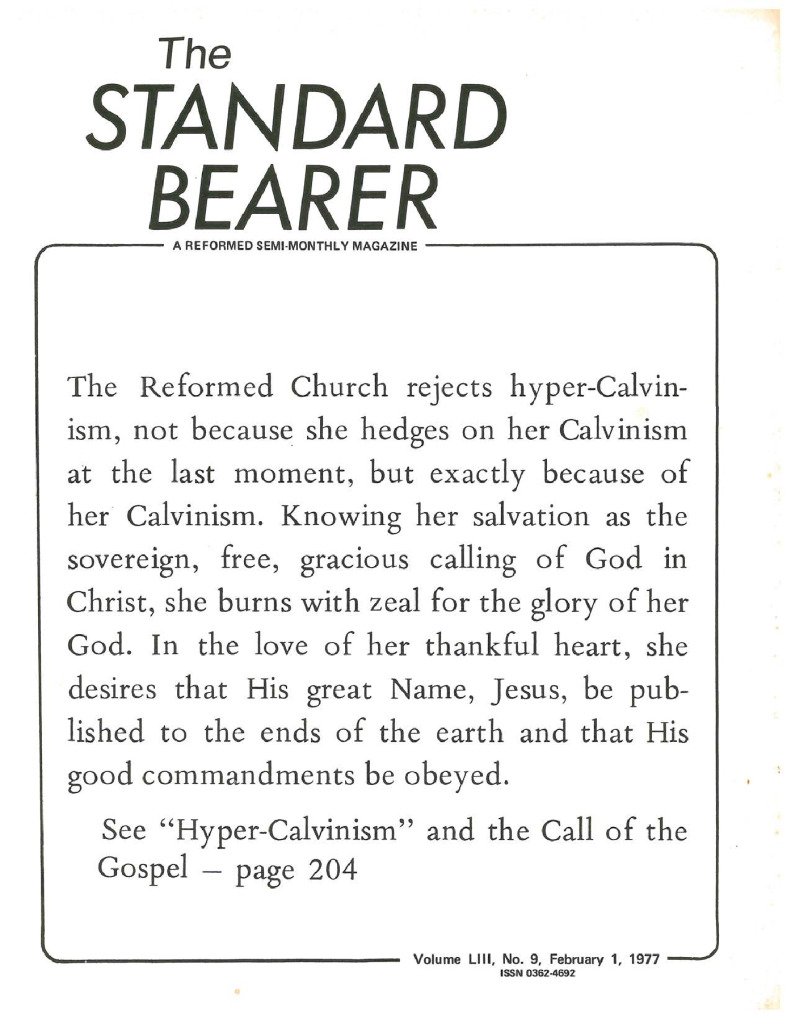