Back to School (4): Dwelling Alone in Education

Back to School (4): Dwelling Alone in Education

We concluded last time by calling attention to sev­eral passages, from both the Old and the New Testa­ment, in which the principle of our Christian isolation is announced. And it is this principle, which lies at the foundation of all Christian action, inclusive of Christian action in the field of education, to the signifi­cance of which we call your attention in the present article. And for the sake of clarity, it is well, perhaps, that we do so especially from the antithetical aspect.

The first question which we face in our present discussion is: what is meant by our Christian isolation? A very important question this is, because upon it depends our understanding of our whole Christian calling in the field of education. The wrong answer to this question might imply logically that we anabaptistically withdraw from any educational activity in so-called secular branches. It might also mean that we may be satisfied with education that is separate merely in the local and purely physical sense of the word. In the latter case, we would have separate schools all right; but that mere physical separation would be of no significance and no value, nor would it be obedience to our calling as Christian parents. Hence, we must clearly understand the nature of this isolation, first of all.

And then we may say that the calling of the people of God to be separate already in the old dispensation did not imply that the essence of this isolation lay in a physical and local separation. Apart from the fact that ultimately such physical separation cannot be maintained because the world always arises and de­velops right in the midst of the church, it would be relatively easy for God’s people to find a separate and lonely place to dwell, isolated from the world, having no contact with the modern world, living their own life in a self-sustaining little colony. Such has often been attempted in the history of the church, and it has always suffered shipwreck on the shoals of the flesh which existed and arose and developed right in the midst of the church. But it has often too been tem­porarily successful—successful, that is, from the point of view of its goal. In that way we are able to avoid contact with other people, with the nations of the world, with the world and all its evil machinations. And the need of any battle and struggle on the part of God’s people is prevented.

According to Scripture, however, not only is this physical and local separation ultimately unsuccessful, but it is also based upon an erroneous understanding of our Christian calling. Nowhere does Scripture ad­monish God’s people to such local separation. Even in the old dispensation this was not the nature of Israeli separation. God did not choose, form, and separate to Himself a people for this purpose. He did not will that His people should withdraw from the world, that they should so live as to prevent the necessity of any battle.

It is true, of course, that Israel in the old dispensa­tion was nationally separate. God’s covenant was tied in with the national existence of Israel. It ran in the river-bed of the natural generations of Abraham. It is also true that in connection with this national form of the realization of God’s covenant in the old dispensa­tion, Israel lived in a geographically separate land and in a special land. They lived in a land flowing with milk and honey. And in that land, in harmony with the character of the age of shadows, they lived their own national life.

But the essential nature of Israel’s isolation did not lie in that outward separation at all. If that had been God’s purpose, we may safely say that the separation between Israel and the Gentiles could and would have been much more complete. Israel would have been led then to some remote and unknown corner of the earth. Instead they were led into the land of Canaan. And Canaan was not in some forgotten corner of the world. Rather, it lay in the very center of the world. The eyes of the nations were always on Israel and on their land. That is the history of the entire old dispensation as far as Israel is concerned. And the whole of Israel’s history shows very plainly that this outward separa­tion was just so much form. Remove from national Israel the essence, the real, spiritual essence of her separation, and Israel was in no respect different from the rest of the nations, except, perhaps, in this, that she was more frequently the foot-ball of the nations and was to be classed as a fifth-rate power. And later history shows that the national and geographically separate form could fall away, and God would still have His people, chosen, separate, and peculiar, in the midst of the world.

Already in the old dispensation, however, the ground of the separation of God’s people lay in their very special relation to the only Lord God. It lay in the covenant relation, a relation which ruled all their life—civil, social, and religious. It must become mani­fest in all their life that they are of the party of the living God. For that reason they live apart nationally, but with the eyes of the nations upon them. For that reason they are surrounded by the nations, but must not intermingle with them, must not intermarry with them, must have no fellowship with them, may form no alliance with them in time of war. They are a spiritually separate people, and therefore they must and do dwell alone. It must become manifest that God, the Lord, the holy one, had formed a people for Him­self. And because He had done this for His own name’s sake, Israel must in all their life tell forth His praises.

In the new dispensation this principle remains un­changed, as is clear from the passages from the New Testament which we cited last time, and which apply directly to the church in the new dispensation. God’s covenant is no longer nationally limited. God’s peo­ple no longer dwell in a separate land. They are no longer outwardly a separate covenant nation. They have no separate civil laws and customs. They have no separate earthly throne and king. But the call to sep­aration is still the same. In fact, through the falling away of national boundaries, and due to the fact that thereby God’s people are thrown into just a little closer contact with the world, the antithesis is sharpened.

Also today, therefore, this call to separation is not a calling to separate from the world in the local sense. The Christian is not called to withdraw from any de­partment of life. On the contrary, he is called to be busy and active in every department of life. We do not consider the various spheres of national life sinful in themselves. There is no antithesis between nature and grace. If that were the case, we would have to leave the world. Then the ideal would be to leave the world, to go into a cloister, to fast, and pray, and deny ourselves the necessities of earthly existence. But such behavior is as contrary to our calling as it is unsuccess­ful.

The church, however, still stands in that covenant relation of friendship with the living God. The be­lievers are of God’s party in the midst of the world. And therefore they stand antithetically in the midst of the world that lies in darkness, with the calling to be holy as the Lord their God is holy, and to proclaim the virtues of Him who calls them out of darkness into His marvelous light. That calling is, therefore, the spiritual principle from which they live. In the midst of the world, they live out of the principle of regenera­tion, and that in every department of life. That prin­ciple rules their entire life—their family and social life, their industrial and economic life, their political and religious life. And called they are, to turn away from any other principle or rule than that of God’s Word. Hence, they can never unite with the world when that union would imply a denial of their spiritual isolation and a subjection to the carnal will of the world. For, they are a chosen generation, a holy nation, a royal priesthood, a peculiar people, that they should show forth the praises of Him who called them out of dark­ness into His marvelous light.

Confessing the above, you confess the necessity of Christian education. This is true, in the first place, because it follows that also the sphere of education must be ruled by this spiritual separation, and must therefore be in harmony with God’s Word. To be sure, this implies that Christian education is more, much more, than education plus a little Bible instruction, an opening and closing prayer, and the singing of a few hymns. It implies that the entire instruction of our children is grounded in God’s Word and is ruled by the principle of the fear of the Lord alone.

That means that even if the public school system allows prayer and Scripture reading—something which is neither possible nor desirable really (how shall you read God’s Word in the sphere of darkness, and call upon Him Who can have no fellowship with dark­ness?)—that would not make the instruction Chris­tian. Nor should Christian parents sooth their con­sciences with this salve of a little added pseudo-religion in the public school. We must firmly take our stand upon the basis of the principle of the antithesis, no matter what may be the policy of a particular public school, and no matter whether that little rural school has a teacher who is a Christian; and we must main­tain our isolation. And the only way to do that is to educate our children ourselves, in our own schools, ac­cording to God’s Word. Nor must we violate this prin­ciple of the antithesis by consoling ourselves that the education in the public schools is non-religious, neutral. For, in the first place, that is not true; it is impossible. And in the second place, if it were true, you might not even then send your children there. For your calling is not to be neutral, but to be spiritually separate, to walk as of the party of the living God in the midst of the world. Nor dare we, as Christian parents, ever choose the public school in preference to the existing Christian Schools. No one can ever, on any honest and sound grounds, maintain such a practice in the fear of the Lord. 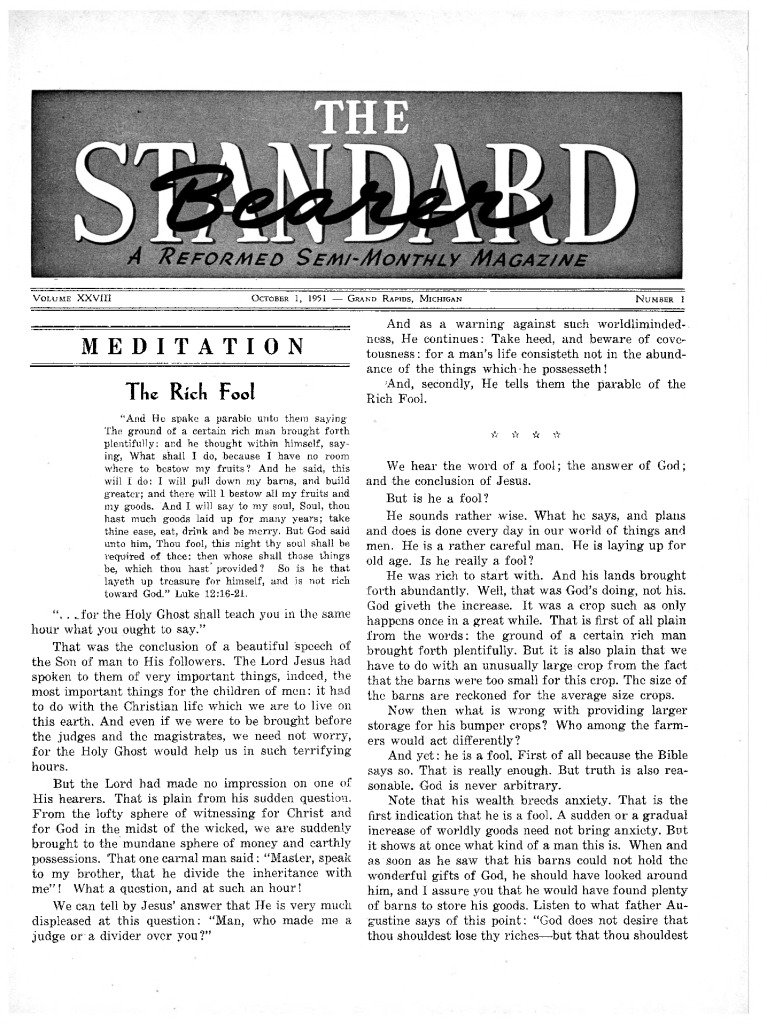