Although the modern Pentecostal movement is of fairly recent origin, the heresy that the movement promotes has ancient precedents. Solomon uses as his theme in Ecclesiastes the saying, “There is nothing new under the sun.” This truth applies also to Pentecostalism.

In the early church the error of Montanism arose, which, while not in all respects like today’s error, was nonetheless a predecessor of Pentecostalism. The Montanists were followed by mystical sects of all sorts that appeared throughout the entire Middle Ages, when the church was enslaved by Roman Catholicism. Even the Reformers were not free from the bothersome error of the Anabaptists who, in their theology, resembled the Pentecostals in so many ways.

Yet none of these various sects were quite like modern Pentecostalism. Perhaps one of the chief distinguishing characteristics of today’s Pentecostalism is its ecumenical nature. Almost always, whether tolerated in the church (as were the mystical sects of the Middle Ages) or declared by the church to be sectarian and heretical (as was true of the Montanists and Anabaptists), these groups were separate from the church. Today the movement is more like an amorphous spirit that has entered into the religion of many people. The movement is not organized into ecclesiastical bodies but has permeated almost every denomination. And it is to the shame of these denominations, some of whom claim to be Reformed, that they shelter in their midst and give tacit, if not official, approval to a deadly error.

Pentecostalism is a grave threat to the church and will be the death of the church unless it is eradicated.

The History of Pentecostalism

After the Civil War (1861-1865) the churches in America emerged from this gigantic struggle in quite a different form than in the days of “frontier religion.” The difference was chiefly in more organization, more ecclesiastical control of the life of the church, more formal religion, more intellectual orientation. Prior to the Civil War, frontier religion was free, loose from any organizational restraints, emotional rather than intellectual, and without a definite creedal basis. After the war, this changed. And it was in response to what many called the dead and cold life of these post-war churches that the “Holiness Movement” arose, which put its emphasis on inner experience of religion, sanctification, and closeness to God.

In the early part of 1900, Charles Fox Parham, a teacher in Bethel Bible College in Topeka, Kansas, became increasingly dissatisfied with the coldness and formality of the churches in the area. Pondering the matter, Parham came to the conclusion that the problem lay in the fact that the churches had drifted away from the simplicity and religious fervor of the early church in Jerusalem. As a consequence, he began to teach people and ministers to pray for a return of the Spirit and a renewal of the Pentecostal blessing.

A woman by the name of Agnes N. Ozman, a student of Parham, claimed that on 1/1/01 (January 1, 1901) she received the baptism of the Holy Spirit and began to speak in tongues.

Parham and his disciples, encouraged by this evident answer to their prayers, began, in 1905, to preach their new discovery throughout the Southwest of the United States. They soon gained a rather large following and began to form groups of like-minded people to pray for divine renewal. In the heart of the industrial district of Los Angeles, California stood a small clapboard church in which Methodists had once held services. It was located on 312 Azusa St. and was called the Apostolic Faith Gospel Mission. It was led by a one-eyed Negro man by the name of William Seymour. He was a former Holiness preacher who had been influenced by Parham. At a public meeting in 1906, Pentecostalism as a national and even international religion began. The group worshiping on Azusa St. experienced an outpouring of the Spirit that was a repetition, so it was claimed, of Pentecost. The people upon whom the Spirit came began speaking in tongues.

The church ministered to all classes and races of people and soon became a mecca for people from all over the country. These people, sharing in the special outpouring of the Spirit in the Azusa St. meeting house, went to their homes spreading the word that another Pentecost had finally come. The movement spread like wildfire and grew by leaps and bounds. It was the beginning of Pentecostalism.

Pentecostalism is not a denomination or an organized group of churches with a common confession and administration. It has always been and is now a movement.

But Pentecostalism resembles more a movement with some common characteristics, though in practice wide differences exist between different groups. In other words, it is a movement that has infiltrated many denominations, and while these denominations differ radically among themselves in their doctrine, history, worship, and church government, they are, almost without exception, open to the presence of Pentecostalism in their midst. From Roman Catholics to Reformed and Presbyterian denominations, the churches of the Reformation have viewed this movement favorably.

It appears as if the one most powerful force driving ecumenicity and the union of all churches into one super church is the Pentecostal movement.

The movement is known by different names. Some of the better known are: the Azusa St. Movement; the Charismatic Movement (taken from the fact that the gifts of the Spirit mentioned by Paul in I Corinthians 12 are called charismata); the Second Blessing Movement; and the Baptism of the Spirit Movement.

Pentecostalism is extremely appealing to today’s churchgoers. Its appeal is also its deceptiveness. When the church as it is manifested in the world loses the power of the lively preaching of the Word, it incurs a debt that has somehow to be paid. The debt is incurred by the loss of a living faith in the members and by worship services that are formal, cold, lifeless, and unsatisfying. There is a vacuum created in the lives of people, into which almost anything that is appealing can come rushing as a mighty wind. The vacuum left by dull and lifeless preaching was filled by the stormy winds of the Pentecostal Movement. The debt was paid by Charismatics.

Put with this the reality of life in twentieth-century America in which people began to emphasize more and more the necessity of feeling good. Under the leadership of powerful preachers who talked about positive self-images, feeling good about oneself, the power of positive thinking, etc., a feel-good gospel was more and more attractive to people who found it too hard to do a little thinking and who were too intellectually lazy to try to master even the rudiments of the Christian faith. 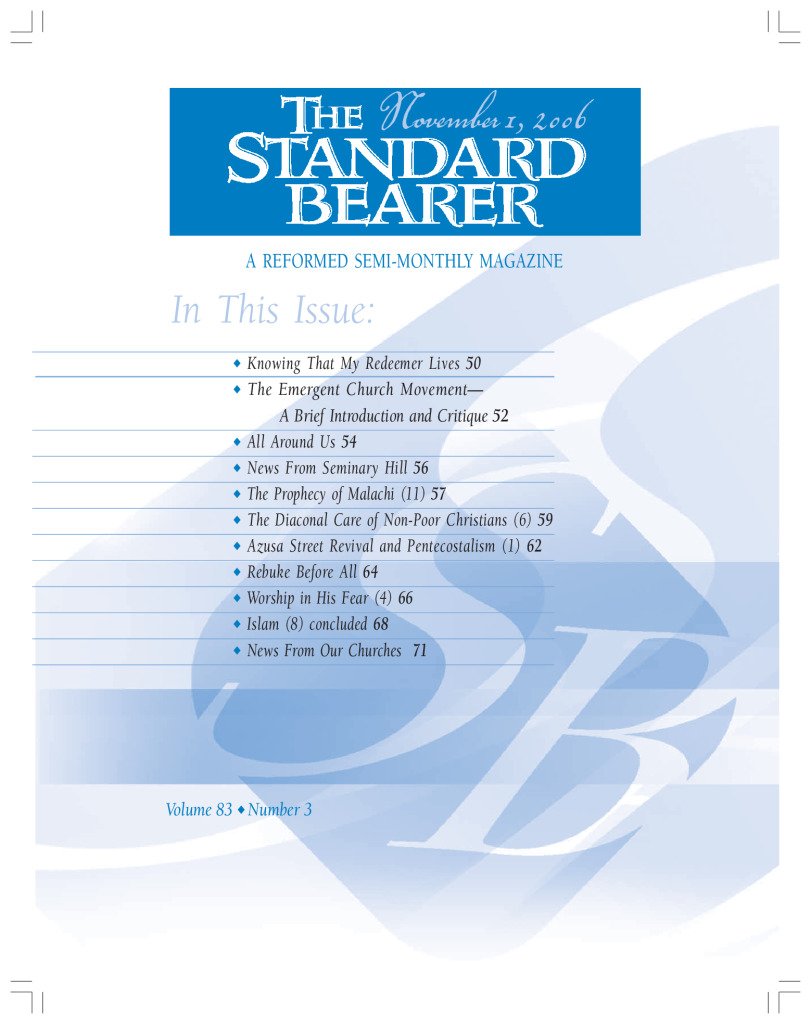