What has Jerusalem to do with Athens?

This is the question theologians put when considering the matter of how the Church, Jerusalem, is related and relates to the world, Athens.

Put another way, the question is How is the Church, and how are the people of God in that Church a part of or not a part of the culture of a fallen world? And if by “culture” is meant “the ideas, customs, skills, arts, etc. of a given people in a given period; civilization” (New World Dictionary), then the question is Are the world’s ideas, customs, skills, and arts ours? And, if so, how do we interact with, learn from, cooperate with that culture? If not, if the church and the culture of the world are distinct, how do we keep ourselves and our children from it? Are we Christians to express, even, opposition to such a world and its cultural products? Are we to develop…our own?

The question comes down to What saith the Lord, what is His Word about a fallen world’s art, literature, law, science, technology, government, philosophy? Is it all broken? Is it all or most or part full of hell? What do we say of Roman jurisprudence, Shakespeare, Poe, Bach, Brahms, cloning, transplants, the movie, and The Life of Bill Clinton? And then, how does our view of Athens show up in what we read and hear, in what movies we attend or do not, in what medical procedures we will submit to, and in our thoughts of a certain Monica?

Since “culture” involves the causes of a people in that culture, the question of Jerusalem and its relation to culture, the culture of Athens, involves, necessarily, this one: Are Christians to make common cause with unbelievers? I have on my desk petitions (which I aim to use) for gathering signatures in order to try to amend the constitution of our fair state of Michigan to protect marriage from the happys. Should I be so concerned and so involved? What kind of a gospel minister am I anyway? Should you, while we are at it, try to save the rain forests and the whales with Green Peace? What kind of a Christian would you be anyway?

Many preach we ought to unite with the culture and causes of the world due to just how much Jerusalem and Athens have in common. We share culture, it is observed, and also a common culture mandate. We have a shared image of God, it is claimed, and a grace, too, to praise the Lord in rejoicing together in the things we share and in the work we can do as children of our Father in heaven. We cry together, they remind us, over the Holocaust. We rejoice together when the good guy wins, and when the bully, the cheat, and the tyrant are shamed. We wish together that if not Calvin, at least Calvin and Hobbes were back. We all go to the same hospitals. We all pity those who can’t. Their answer to the question “What hath Jerusalem to do with Athens?” Everything. Everything on earth. And perhaps, as well, everything of heaven.

Others contend for the same unity and basis for unity, but recognize that significant differences remain between Jerusalem and Athens. Jerusalem may rub shoulders with the world, do science with and learn from God-denying scientists, invite heathen speakers to a January series of lectures, and rap and dance with Athenians…but this in order also to redeem their shoulders, their science, their speakers, and their hip-hop.

Other Christians advocate fleeing the culture, never reading Shakespeare, never admitting to reading the Hobbit, reading only Reformed writings, never writing poetry except it contain a verse from the Bible, ever attempting to make Reformed music, sovereign grace notes and all. These take literally Deuteronomy’s Israel shall dwell in safety alone, and the Lord’s call to His people not only to destroy the enemy, but, presumably, also to burn her books. These ask the question “What hath Jerusalem to do with Athens?” and What hath Jerusalem’s culture to do with Athenian culture as rhetorically as Paul once asked “What fellowship hath righteousness with unrighteousness? And what communion hath light with darkness? And what concord hath Christ with Belial? Or what part hath he that believeth with an infidel?”

We want to consider this fascinating and not altogether easy question of the relationship of Jerusalem and Athens in a short series of articles in Grace Life. Understanding the question and the principles involved in this whole matter will be our first objective. Being able to apply these principles, and as young Grace Life folks, will be our second objective, like unto the first.

Some things before we leave off for now.

First, I dare say that this “How do we Christians, and Reformed Christians at that, relate to the culture” is one of the most important questions of our day. I am bolder to say that it is even more important than the Dating Thing with which we battled on several campaigns in Grace Life. For this question we now face asks more, much more, than what Jerusalem’s way of a man with a maid has to do with the backseat of Athenian chariots. It is the broader and more basic question Just how are we Christians, and we Grace Life Christians, to be in the world and not of it, in the world but not worldly? And how are we who are not of the world nevertheless to enjoy the good gifts the Lord has provided even through unbelievers? And how are we believers to be in Athens in such a way that we might gain some Athenians to Christ?

Second, you ought to know that much has been written before on this subject. And, I suppose, it is helpful that you know that I know that. I have piled on my desk works with titles such as Christ and Culture, Testament of Vision, Culture and the Cross, The Calvinistic Concept of Culture, and Christ and the Fine Arts. In the Reformed tradition there has also been much wrestling with and thought given to the subject. Abraham Kuyper, brilliant nineteenth and early twentieth century theologian and statesman in the Netherlands, wrote and spoke widely and forcefully on just this matter of the relationship of Jerusalem and Athens. His six Stone Lectures (delivered at Princeton in 1898), for example, address such subjects as “Calvinism and Politics,” “Calvinism and Science,” and “Calvinism and Art.” Our own churches have produced a pamphlet or two on “Culture” and several particulars of the culture, one recent publication addressing the matter of “Jesus Christ in the Movies.” Several articles in the Standard Bearer have also spoken to the issue. “Antithesis, Culture, and the Cultural Mandate” is an article located in volume 62 of the SB. Another, published in the very first volume of the SB, bears the title “Op Alle Terreinen des Levens.” And there are several articles concerning common grace and culture. Yours truly, in the articles to come, will attempt not to presume to add to but to coalesce and to reflect the wisdom of the fathers and to present it in a readable and practical and twenty-first century and Grace Life way.

Third, Scripture, of course, will be our primary guide. Much can be gleaned from Genesis to Revelation about Jerusalem and Athens and their relation to one another. I will take as a primary reference point the book of Acts, chapter 17. There we read of the apostle Paul in Athens. He is taking a vacation there from the labors of his second missionary journey. He has gone downtown to the library there and browsed the writings of the philosophers, enjoyed Greek ice cream, sunned on the beaches of the Aegean, visited the museums, and especially has he enjoyed the Olympic games. Then things really start happening….

Finally, I leave you with this. About those Olympics. Arguably the cultural world event of this year, 2004. And now they are back in Athens where they came from. World class athletes from many nations should be running and throwing and swimming and kicking and boxing and shooting there as we read. There may even be some Americans among them, if any have survived the dope screening. Question is: will you be there? Should a believer train to compete there? Should we watch these games? Did Paul in Athens 2000 years ago really (and did he really go to the museums, etc…?)? What’s there to learn about Jerusalem and Athens from a little man, a little Christian man, but an Apostle and an inspired man, and his doings among the Athenians long ago?

Methinks much. Let’s see. For Grace Life. And Athens, here we come! 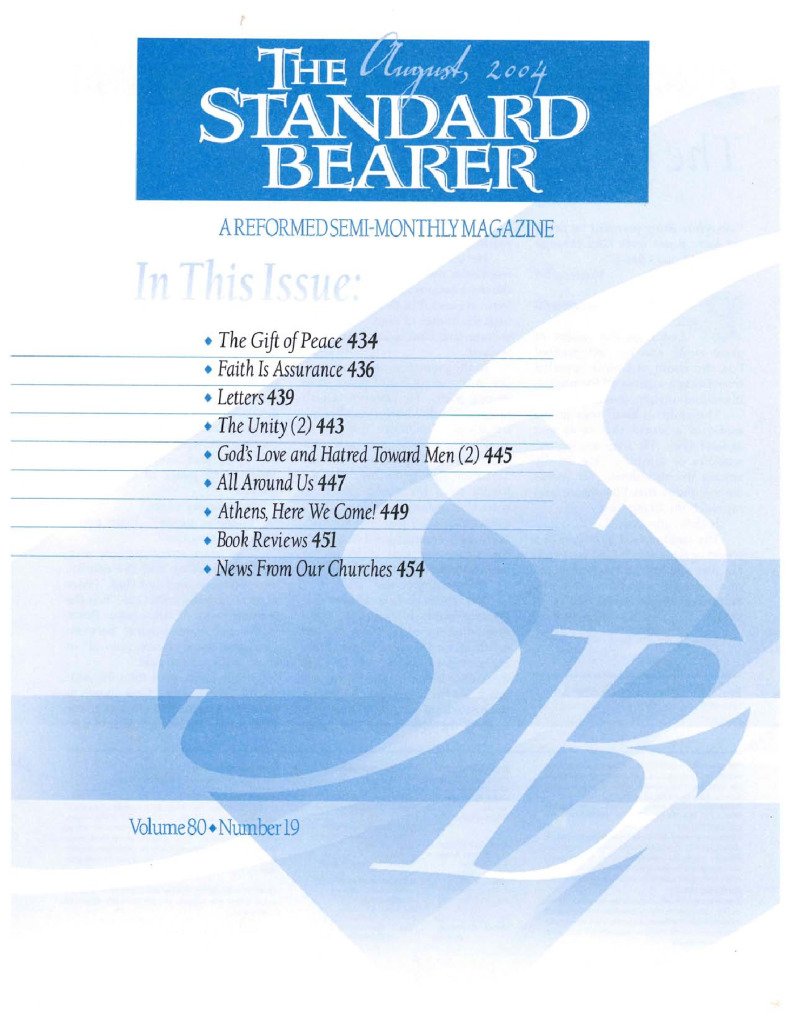