As To The Form For The Lord’s Supper

As To The Form For The Lord’s Supper

“I have several questions concerning the Form for the Administration of the Lord’s Supper.

“First of all, where did it originate to read the first part of the form for preparatory, and then just the second part for the actual communion service? It is true that the first part., dealing with the examination of ourselves, is a part dealing with preparatory, and that the form consists of two parts; but it is my feeling that they should not be separated. Have the Synod, Classes, or local consistories originated this?

“Do you have any thoughts on this matter? I’ve long thought about this and would desire an answer to these questions.

First of all, for the information of those who are not. acquainted with the practice referred to in the above letter, my questioner is referring to the practice of reading the entire first section of the Form on preparatory Sunday, and reading only the second section, beginning with the words, “Let us now also consider to what end the Lord bath instituted his Supper . . .,” on communion Sunday. About this practice my correspondent has several questions.

In answer to the first question, to the best of my knowledge this practice originated with some of our consistories in the Grand Rapids area. It did notoriginate with any classis, nor with Synod. As to possible reasons for this innovation, I can only guess, not having access to the minutes of any consistory which introduced the change. My guess is that the reasons were two: 1) The desire to abbreviate the communion service (possibly especially in churches where there are two communion services) by reading part of the Form on the previous Sunday. If the minister reads rather leisurely, this first section of the Form takes perhaps ten minutes. 2) The (mistaken) idea that this so-called preparatory section belongs properly at the beginning of preparatory week rather than at the end of it.

As to the second question, my answer is affirmative. I believe that if the first part is read the previous Sunday, it is indeed proper to read the institution again on communion Sunday. In fact, when occasionally I officiate at the Lord’s Supper in churches in which the Form is divided, I have done so. My reason is that I believe this to be liturgically sound. That institution belongs properly to the celebration of the sacrament, and, in fact, forms the basis of its celebration. Besides, I always feel that it is very abrupt simply to begin with the words, “Let us now also consider. . . .”

As to the third question (Do you have any thoughts on this matter?), my answer is: Yes, several.

1)I believe that the practice of dividing the Form ishistorically incorrect. I have several source-books in my library about our liturgy. I have consulted them in the past, and I checked them again before answering this question. In none of them can I find any reference to this practice of dividing the Form ever being intendedor followed—going all the way back to the time when this Form was first adopted in the Netherlands in the 16th century. This is also evident from the language of the Form: it is not designed to be divided. It is not two forms, but one. It does not have two addresses, “Beloved in the Lord Jesus Christ . . .” but one. Technically, if this Form is divided, the minister ought to say at the end of the first section on preparatory Sunday, “To be continued.” Of course, this historical reason all by itself is not sufficient. They may have been wrong in the past. Nevertheless, I believe we ought to have a healthy respect for history, and that long-standing practices ought not to be lightly ignored and overthrown. Usually one discovers that there was some sound reasoning at the basis of the practice. At any rate, if one overthrows three or four centuries of history, he had better first do some good basic study and have some good reasons.

2) I believe that the practice of dividing the Form is liturgically incorrect and based upon a mistaken understanding of the Form. Perhaps you have already noticed that part of this misunderstanding unintentionally crept into my correspondent’s letter. He writes: “It is true that the first part, dealing with the examination of ourselves, is a part dealing with preparatory, and that the form consists of two parts.” But this is incorrect. The section which is usually read at the preparatory service consists of three parts, only one of which may at all be classified as “preparatory.” Those three parts are: 1) the institution; 2) the self-examination; 3) the exercise of the key-power, sometimes wrongly called “the excommunication,” (beginning with the words, “All those, then, who are thus disposed, God will certainly receive in mercy. . . .”).

Properly speaking, there are two main sections in this Form. The first main section is the doctrinal, or instructional, section. The conclusion of this section and the transition to the second section is in the words, “hereto assist us, the Almighty God and Father of our Lord Jesus Christ through his Holy Spirit. Amen.” Then follows the second main section, the ritual section, consisting of the Prayer, the Admonition “to lift our hearts on high in heaven,” the Communion proper, and the Thanksgiving.

When we divide the reading of the Form, we break up that first main section,—something which was never intended and which was never practiced in the past. The first, or didactic, section of the Form consists of the following sub-divisions: a) The institution; b) the self-examination; c) the positive and negative exercise of the keys of the kingdom, in which the faithful are encouraged and admonished to partake and the wicked and impenitent are warned that this communion is not for them; d) the exposition of the meaning of the Supper.

But the question is: what about that section on self-examination? Is not our preparation to take place during the preceding week, and is it not therefore altogether too late to talk about self-examination at the very service where communion is to be celebrated? And does it not make good sense to read that part of the Form a week earlier, at the preparatory service?

As I have already indicated, the negative part of my answer is that this was never the intention when this Form was composed and adopted. It could not have been the intention: for then our fathers would have made provision for this in the very language of the Form, something which they did not do. Then we would have had two forms: a preparatory form and a communion form. And besides, this has never been practiced in the past.

What then? Did our fathers actually expect the spiritual work of preparation to take place at the very service when communion was celebrated? No, they knew better than that!

This is the intent of the Form: a) On the Sunday preceding the celebration of the Lord’s Supper there is to be a preparatory sermon. The purpose of this is to admonish God’s people that they may only come to the Lord’s table as proper partakers, to examine themselves, and, if there is anything “out of the way” in their life, to remove it. Hence, the work of self-examination and preparation goes on indeed in the preceding week. For this reason the rule of having a preparatory service has been observed since the 16th. century. And besides, in by-gone years family visitation was always conducted by the elders before every celebration of the Lord’s Supper with a view to having the congregation prepared to partake. b) Then on the Sunday of communion also the section on self-examination is read,—not to initiate self-examination, but to conclude it, to summarize it. It is necessary to come to the Lord’s table in the right attitude and the right spiritual “mood.” To this end, it is necessary to perform the spiritual deed of testing one’s own heart and soul—as a conclusion of the week’s preparation—in order, positively speaking, to stimulate the heart to come to the Lord’s table in the proper attitude, that attitude which is demanded by the character and purpose of the Supper. c) And it is in this connection, thirdly, that the next section of the Form fits in beautifully: those who, having examined themselves and who are prepared, are then admonished and encouraged to come to the supper; and those who, having, applied the three-fold test of the section on self-examination, find that they are in a wrong way (not a way of sin, but a way of walking in sin and of impenitence) are warned to abstain.

3) I believe that this practice of dividing the Form is technically contrary to the Church Order. The Church Order (Art. 62) prescribes that “at the conclusion of the sermon and the usual prayers, the form for the administration of the Lord’s Supper, together with the prayer for that purpose, shall be read.” It does not say “part of the Form” or “the second part of the Form,” but, “the Form.” But, I hear someone say, is not the order of worship a matter for local decision? Correct, with the single exception of such matters as are prescribed by the Church Order (the Forms for Baptism and the Lord’s Supper, for instance) and which can only be changed by synodical decision, i.e., the agreement of all the churches in common.

Why, then,—I hear someone say—do you not protest this illegal practice? My answer personally is, in the first place, that this is no great matter of principle for me. Secondly, things of this kind are sometimes better changed by instruction and by overture than by protest, appeal, and decree. But these matters are worth considering; and they certainly ought to be carefully considered by consistories. Moreover, I think that if any consistory thinks that our Form should be divided, or that other revisions are necessary, they should give all the churches the benefit of their thinking, so that changes may be achieved in the proper way, and so that proper liturgical uniformity may be maintained in the churches.

I hope that my correspondent and our readers generally may now at least see some of these problems a bit more clearly. 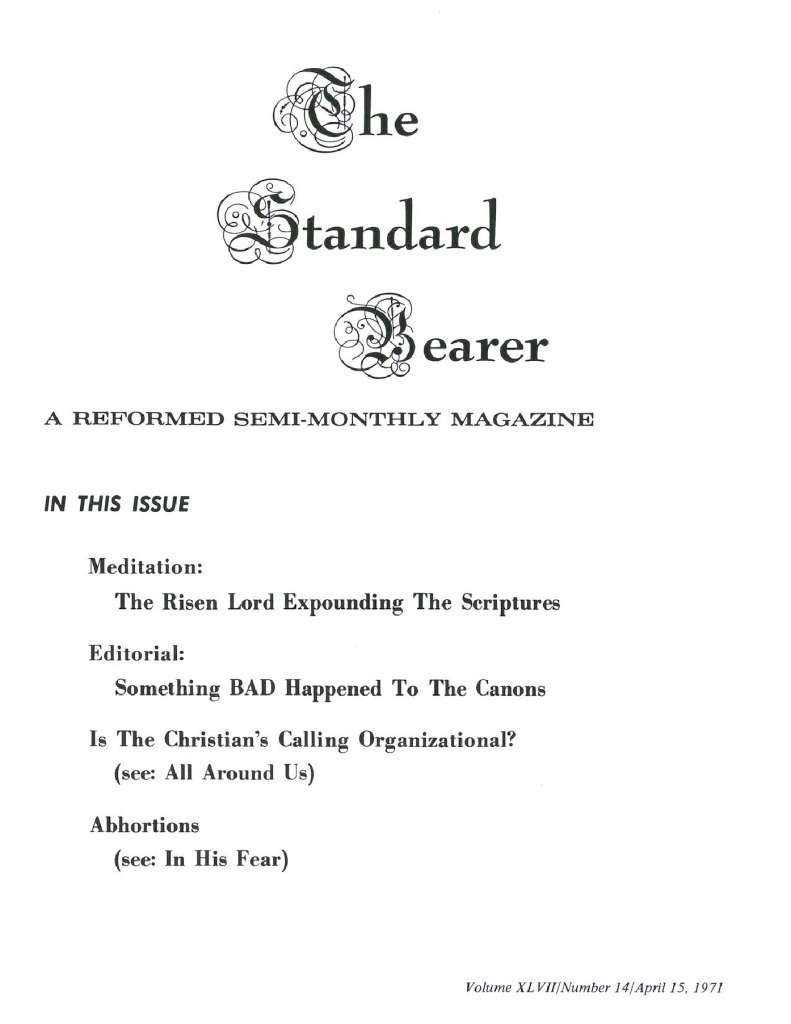