Is there no way out of our present economic difficulties?

Can a mere layman, who cannot boast of being an expert in the department of economy, see no possible solution?

First of all, let us take note of the fact that the general level of living today is much higher than, say, about three decades ago. Time was, and this “time” is still a matter of memory for all that do not fall below the ages of two score and five, when with the general mass of people, the working people, the people that produce the commodities for the buying public, the factory worker, the mechanic, the sewer digger, the farmer, and even for most professional men, the mode of living was rather simple. The horse and buggy period is still fresh in our memory. The common people lived in comparatively humble dwellings; the furniture was plain; their homes were heated by stoves that consumed little fuel. They worked nine or ten hours a day, earned a dollar and a half or two dollars per day, were satisfied and saved a little for their old age. They walked to work and from work, left their homes about six o’clock in the morning and returned in time for supper. They travelled but little. Their home was their joy. To take the street car, (or even the interurban!) to some park or lake was an event that could be conceived as occurring only on a special holiday. . . .

But how all this has changed!

The larger homes, the more expensive furniture, the luxuries of life, the modern conveniences, the heating system, hot air, hot water, steam, the telephone, the radio, the automobile,—these belong to the common things, which everybody enjoys. And if they cannot pay cash for them, the credit system makes everything easy! No family could conceive of two dollars per day as a living wage. And what was formerly an all day outing, appointed for holidays only, now has become an evening joy-ride!

I mention this merely as a fact, and by fact I mean something that simply has to be accepted and that you and I cannot change, even if we would.

It surely is no solution of the present crisis to advise that people had better return to their former
and simpler mode of living, for the plain reason that this is just as impossible as lifting oneself by one’s own suspenders.

You may bewail the fact, perhaps, that the former days were better than these, that the simpler life is gone; you may point out that there was more contentment and less trouble, that people had more home life and could gather around the fireside as a family, which today has almost become impossible, but that does not change the fact.

There is, of course, a goodly percentage of truth in what you say.

Modern life with its higher level, with its pleasures and luxuries, its high tempo and fast movement, shows very plainly that, even in the earthly sense, happiness and contentment cannot be found in an abundance of things. In the “olden days,” which after all are not so old, there was less pleasure but more often more real joy, there was less leisure but more rest, there was less abundance but more satisfaction. Although it must not be forgotten that there is another side to this story.

This, however, is not the point in question.

Fact is that life has changed, that the rank and file of mankind live on a higher level than before, and that, no matter how you may evaluate this fact, you will simply have to accept it.

You cannot set the clock back.

Unless you move into the woods and live the hermit life, you cannot live the life of fifty years ago in the modern world and in modern society.

Even if you could be perfectly content with your horse and buggy instead of an auto, with your spade instead of the steam-shovel; and though you would be willing to get along on a nine to twelve dollars a week wage, the modern system of society would not permit you.

This fact must be taken into consideration if you would account for the present confusion.

And there are other facts. 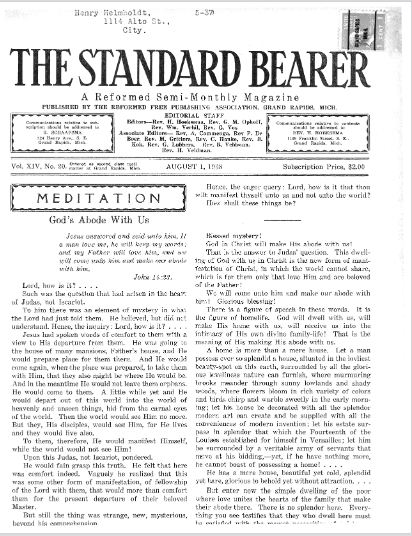