This is in many respects a valuable book. It can be read, I think, not only by theologians, but also by any intelligent reader. The transcribed Hebrew terms will cause not much difficulty because they are translated and explained. The author begins by giving his definition of revelation and then, in the first chapter, continues to discuss the vocabulary of revelation, its necessity, act, word and response in revelation, its possibility, and closes this chapter by a page or two on man’s knowledge of God in which he emphasizes that man can never know God fully but only in part. The next two chapters speak of the means whereby God reveals Himself such as the acts of God, dreams and visions, the Angel of Jehovah, etc. In chapter 4 he discusses the Word of God both as the spoken and written Word. And in the two closing chapters he speaks of the God of revelation.

The weakness of the book is, to my mind, exactly that the author, as the title of the book already indicates, treats of revelation in the Old Testament only. Yet, even so he could and should have found the revelation of Christ (tabernacle and temple, sacrifice and shadows) also in the Old Testament. This he does not do. This is already evident from the definition he offers of revelation: “the self disclosure of God,” or: “it means quite simply that God mikes Himself known.” This should be: “the self disclosure of God in Christ.” Apart from Jesus Christ there is no revelation of God, not even “in nature.”

Nevertheless, this book is very much worth reading and as such I recommend it to the intelligent reader. H.H.

In a Preface the author writes: “This book attempts too much and accomplishes too little.” I do not know whether or not this is true, but I did have the experience that when I read the title of the book The Church’s Witness To The World and then opened it and started to read it, I was somewhat surprised for the title caused me to expect something different from what the contents of the book offers.

The book is a rather elaborate and thorough as well as sound exposition of the first fifteen articles of the Belgic or Netherland Confession of Faith.

The author first writes a rather long but very interesting introduction in which he discusses the rise of the Reformation, the author Guido de Bres, the official adoption of the Confession, etc. Thereupon he begins to discuss each article, including article 15.

The style is clear and the language is good. I recommend this book to our readers. It may also be used as a guide for the discussion of this Confession in our societies, for which it was originally intended.

Of course, this does not mean that I subscribe to. the entire contents of the book. I do not, for instance, agree with what the author writes about “the small remnants” on pp. 263 ff. H.H.

This is, in my opinion, a beautifully and spiritually written “life of Christ.” It speaks of Jesus’ preparation for the ministry, of its beginnings, of His miracles and teaching, of His being rejected, of His final suffering and death on the cross, of His resurrection and exaltation and in the last chapter of Jesus as the Master of men, as the Son of God, as the Lord of life; of the Spirit given to and dwelling in the Church and, finally, of His coming again on the clouds of heaven.

The style and language of the book is quite in harmony with its richly spiritual contents.

I could wish that what the author writes on p. 15 were a slip of the pen; it is this: “God had done much to make straight his way, but the doors of the human heart only human hands can open.” If this were true no one would be saved. This should be: no human hands but only God can open the doors of the heart of man. H.H.

This book is translated from the Dutch by Harry R. Boer who, by the way, made an excellent job of it. The complete title is: The Triumph of Grace in the Theology of Karl Barth. It was first published in the Dutch in 1956. From this viewpoint the book is somewhat premature for since that time I have received more volumes of Barth’s Dogmatics.

Nevertheless, if anyone is interested in studying the theology of Karl Barth (I mean any theologian, not the general public) he cannot afford to miss reading this book of Berkhouwer. It will serve as an excellent introduction to the study of Karl Barth. It is by no means easy to become acquainted with this theology. Barth is, to my mind, a very dark writer. To me he leaves the impression, not so much that he is intentionally dark and ambiguous, but ‘rather that the concepts which he attempts to develop are not clear before his own mind. As an illustration I may point to his view of the chaos mentioned in Gen. 1:2. I quote from Berkhouwer’s book p. 58:

“Here we read of the ‘tohu wabohu’ (without form and void) and of the antithesis between light and darkness. Barth rejects the interpretation that Gen. 1:2 teaches a state of chaos which preceded the act of creation, as also the view that it teaches the existence of an as yet unformed material mass which God fashioned into a harmonious cosmos. He believes a third interpretation is possible, namely that the tohu wabohu speaks of the earth as chaos and darkness, abyss, utter darkness, nothingness, vanity, ‘a situation without hope.’ The darkness which was on the face of the deep meansdanger. This does not imply a dualistic cosmogeny, but points precisely to the victory of God, to thetriumphant Yes which becomes evident in this, that God overcomes the danger that threatens His creation.”

“In the act of creation God excluded this other, this dark possibility. This does not mean, however, that this other, this rejected world does not have reality. Also this rejected possibility is reality. Also this world, albeit ‘in its own absurd manner,’ has reality. It was in its reality—though rejected—active as a shadow which also lay on the world which God willed and created.” . . . .

I ask the question: does Barth clearly understand his own language? Or is he intentionally vague and ambiguous?

The same is true of Barth’s conception of election and reprobation which also Berkhouwer criticizes, p. 111 ff. According to Barth, Christ is the reprobate or rather He took all reprobation upon Himself and through His death took all reprobation away forever. On the other hand Barth denies universalism or the apokatasis pantoon. Here, it seems to me, he uses terms that have always been understood by the church and in the history of dogma in a certain definite way and attaches an entirely different meaning to them. But again I ask: does Barth understand his own terms?

But let this be enough.

I wish to repeat that one that wishes to study the theology of Karl Barth cannot afford to ignore this book of Berkhouwer. It is true that his criticism of Barth is very mild but this may be even a good feature of the book.

In a closing chapter Berkhouwer offers a rather severe criticism of Van Til’s views on Barth’s Theology. 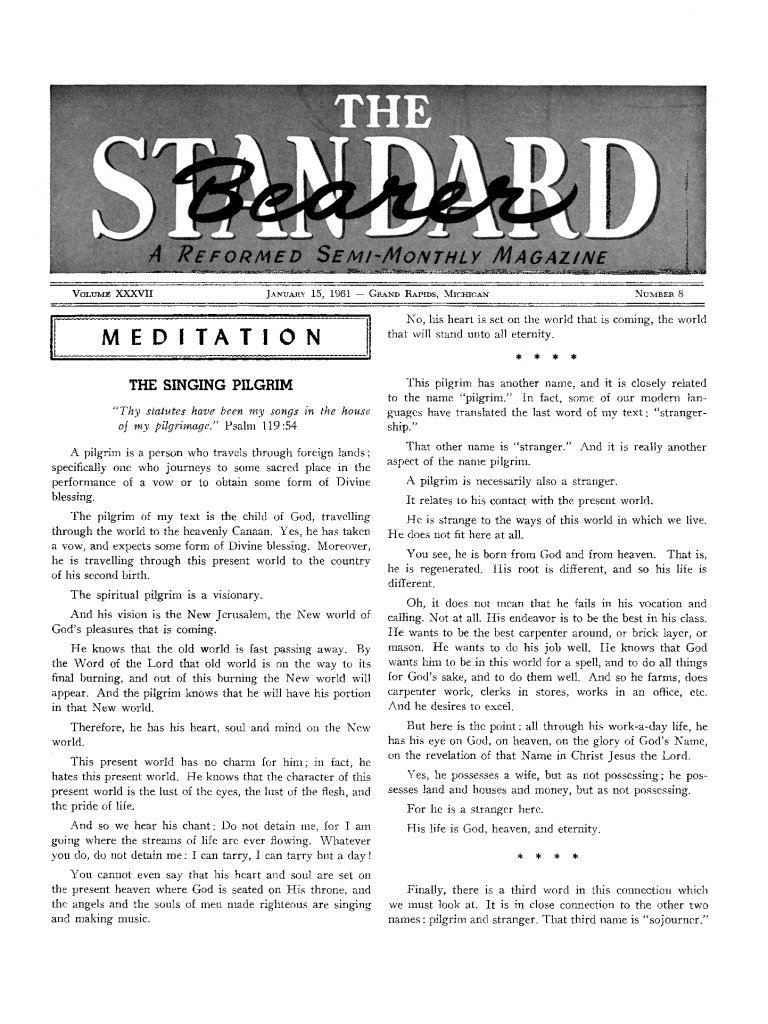