As To A Common Order of Worship

As To A Common Order of Worship

Since I am doing a bit of catching up in the editorial department, I take this opportunity to reflect on some remarks on the above subject made by brother Frank Van Baren in his letter in the July issue (cf. p. 420). I make these remarks in the hope of stimulating further discussion.

First of all, I think brother Van Baren is referring not to our liturgical forms, but to the order of worship in our denomination. To my knowledge, there is no variation in our churches as to our liturgical forms, except, perhaps, that usage in our churches differs as to dividing the Form for the Lord’s Supper or abbreviating it in a second communion service. Nor may there be variation as to these liturgical forms. Their use is, according to our Church Order, binding. What the brother had in mind was the variation in the order of worship which there is among our congregations.

Secondly, I think it is correct to say that we are finding a greater diversity in this respect in our churches. As one who has the opportunity to be a guest preacher in our Michigan — Illinois — Wisconsin churches from time to time, I know this by experience. It has even happened upon occasion that I have forgotten whether a certain congregation has an organ offertory or a singing offertory, because our churches are not uniform in this regard. This is only one example. Our churches differ as to several other details of the order of worship. Probably the greatest diversity at present is to be found in South Holland, where an almost completely new order was recently introduced.

In the third place, I believe that brother Van Baren points to a factor which should not be overlooked. It is this: whatever order of worship our congregations have, that order should have a sound basis both principally and historically. In other words, we should not introduce changes merely for the sake of variety, nor merely because a certain change strikes our fancy or sentimentally appeals to us, while there is no intelligent reason for it, nor merely out of a desire to imitate. In this connection, it should certainly be kept in mind that our order of worship has a rich historical background, one that dates back to Reformation times; and usually when one investigates that background, he discovers that Reformed principles of worship are very much involved also. Yet I dare say that some of our consistories could not even find in their minutes a formally adopted order of worship; their order has simply grown up and become established through usage and perhaps never receives any direct attention until someone suggests a change.

In the fourth place, brother Van Baren suggests the possibility of a synodically appointed liturgy committee. This is no insignificant suggestion. Our present Liturgy Committee is not concerned with the order of worship; its mandate is chiefly to correct the translation of our creeds and our liturgical forms. I would suggest that there are questions to be faced with respect to this proposal. There is not only the question of whether and in how far uniformity in our order of worship is desirable; but there is also the question as to whether this matter lies properly in the province of synod, as well as the related question of the degree of congregational autonomy which our churches have in this regard.

Then, of course, there are all kinds of questions which may be asked about specific elements in our order of worship, — beginning with the opening doxology which some of our churches have, but which some do not have. 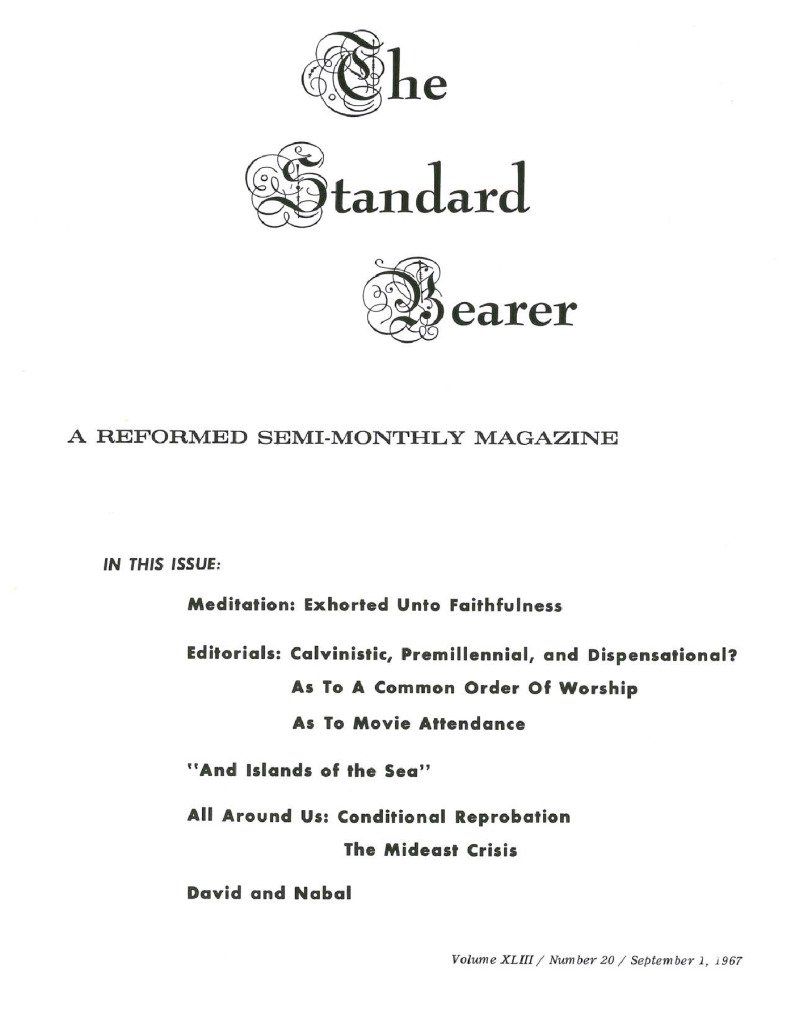