Our readers have for some time now been receiving an account and evaluation of our Australian tour written from the viewpoint of one who made the tour. It was interesting to me, and I think it will be interesting to our readers to see an evaluation of a portion of our tour from the viewpoint of those who received us. And such an account—with respect to our Tasmanian tour—I found in the most recent issue of the quarterly magazine of the Evangelical Presbyterian Church of Australia, The Evangelical Presbyterian. I wish to pass it on to our readers.

The editor of The Evangelical Presbyterian, you will recall, also traveled, in 1974. And Rev. Charles Rodman is still busy writing in his magazine concerning his trip. The first section which I wish to quote is from an account of his visit to Grand Rapids in August of 1974:

“After taking the Lord’s Day services at the Willowdale Church (Toronto, Ontario—HCH)—on Monday morning I made my way to Grand Rapids via Chicago to visit Prof. H. Hoeksema of the Protestant Reformed Church of America, with whom I had correspondence some time prior to my overseas trip, along with others of our Church.

“The Protestant Reformed Church, like our own, cannot accept as Biblical the proposition that God in the offer of the gospel, manifests a sincere and earnest desire for the salvation of all men, even the reprobates. Such a concept does nothing but form an ambiguous bridge of doctrine between the Biblical and Reformed doctrines of grace on the one hand and Arminianism on the other. While we abhor hyper- Calvinism, which as Rabbi Duncan expressed it ‘is all house and no door’, we have, by the grace of God, been delivered from Arminianism which he depicted as being ‘all door and no house.’ On coming to a knowledge of the Reformed Faith, we were amazed to find that the same tenets, which we had rejected when we turned our backs on Arminianism, had been embraced by many calling themselves Reformed under the guise of common grace.

“In our controversy with the Free Church in Australia which began in 1963, we identified the doctrinal system arising out of the idea of a universal desire in God for the salvation of all men, as modem modified Calvinism as distinct from the earlier modified Calvinistic system known as the Doctrine of the Marrow.

“In refutation of these errors and in vindication of the position of our Church, our Presbytery published ‘The Vindication’ in 1965 and later a booklet entitled ‘Universalism and the Reformed Churches—A Defense of Calvin’s Calvinism.’

“During the controversy and after, we had thought that we stood alone. We were greatly encouraged when we learned that there were scholars, ministers, elders and a denomination that had not bowed the knee to this form of pragmatic teaching. It was, therefore, a particular joy for the writer to stay with Prof. and Mrs. Hoeksema and family while in Grand Rapids, and also to meet his fellow colleagues of the theological seminary with others of the Protestant Reformed Church.”

A little later in his article Pastor Rodman adds the following:

“Since my return to Australia, we have had the pleasure of having Prof. and Mrs. Hoeksema together with the Rev. C. Hanko visit our country and preach in most of the congregations of our Church. The appreciation of their visit is given in another section of this magazine. I would like, however, to add my own comment, that the visit gave cause for our people to rejoice in the God Whose truth the Professor so ably expounded. It is music to one’s ears to hear a man who is clear-cut when he expounds the truths of the Reformation. In the Launceston congregation, Rev. C. Hanko related the story of how their denomination came into being. This was most interesting and informative.”

On page 15 of the same issue of The Evangelical Presbyterian there is a further report concerning our visit. That report here follows in full, with a couple of corrections of dates and references made.

“Launceston: We were privileged indeed to have as our guests Prof. and Mrs. Hoeksema and Rev. Hanko on the week-end of 5th and 6th of July. On the Saturday afternoon the Rev. Hanko gave an outline of the history of the Protestant Reformed Churches of America and their struggles against the theory of ‘common grace’, which began to gain a foothold in the theology of the Reformed Churches some 50 years ago as a result of its formulation and propagation by one Abraham Kuyper some years earlier in Holland. The teaching of ‘common grace’ is now generally embraced as having been always a part of the Reformed system of theology.

“This meeting was followed by a fellowship tea prepared by the ladies of the church.

“The evening meeting was taken by Prof. Hoeksema who spoke on ‘The Reformed Faith in Crisis’, where he ably held forth the cardinal truth of our faith, and showed how the faith is constantly under attack; one of the most recent attacks being embodied in a movement known as the ‘Toronto Movement.’

“Then a wonderful weekend was concluded when the Professor addressed the congregation on the Sabbath morning, speaking on the text from Isaiah 45:22-25, ‘Look unto me all ye ends of the earth and be ye saved, for I am God and there is none else.’ The exposition of this text will be remembered by us all for a long time. As one member expressed—’I could have sat there for another two hours’—so intent was the attention on the preached word.

“Burnie: (Wynyard) Reported that they also experienced God’s blessing in the preaching of the Word when Prof. Hoeksema spoke on John 3:16.

“Taranna: Pastor Lyons was especially pleased to meet the visitors as he had corresponded with them for many years.

“Winnaleah: Winnaleah was very privileged to be included in the itinerary of Prof. and Mrs. Hoeksema and Rev. Hanko. A late afternoon Bible study was taken by Prof. Hoeksema who gave a very instructive exposition of Ephesians 2:8, 9, and later answered questions on other topics. About 40 adults and children attended, and a family tea which followed was a happy time of fellowship.

“Melbourne: After a visit to Geelong to meet the Faculty and some of the students of the Reformed Theological College, the visitors stayed two days with Mr. and Mrs. Morgan and family. During that time, with little respite, they patiently discussed many theological issues, and on the second evening conducted a very informative cottage meeting on the subject of Christian education.

“Brisbane: We regret that a report of the meeting in Brisbane is not to hand.” 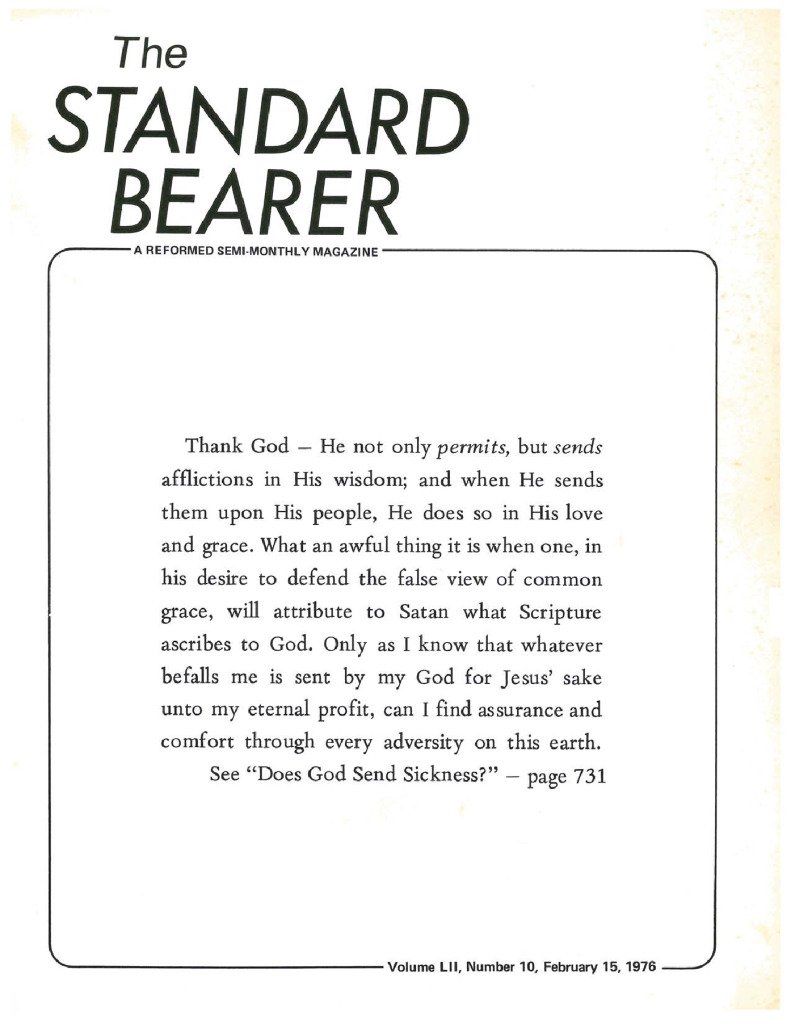