Antinomianism: A Heresy Within

Before you read this article, please complete this brief quiz by writing either “True” or “False” in the spaces provided.

_______ Because I am saved by grace alone, good works have nothing to do with my salvation.

_______ Since I am clothed in the perfect righteousness of Christ, God never sees my sin.

_______ Christianity is not about obeying the law; it is about believing the gospel.

_______ The purpose of the 10 commandments is only to show me my sins and drive me to Christ for forgiveness.

_______ Since God will sovereignly save His elect in His time and His way, the church should not be too preoccupied with His work of missions and evangelism.

_______ Repentance is not about turning myself from sin; it is about God turning me.

_______ The unconditional covenant means that even if I am continuing in sin, I may still be assured of being in God’s covenant.

The idea for this article came from some discussions that took place recently at Classis East and synod meetings of our churches. I trust the young people have heard about it. The debate consisted of whether an individual was guilty of a heresy called antinomianism. After much discussion and a series of appeals and protests, synod finally ruled that the individual was not guilty of the aforesaid error. You may research the details of the case on your own, but I am not as concerned about the details of the case as I am about the hearts of our young people in the Protestant Reformed Churches. While you might not know of anyone who teaches antinomianism, it is nevertheless a real and present danger within our churches.

As I was pondering the case at Classis East and synod, two questions came to my mind: 1) Do our members even know what this big word means? 2) Are they consciously guarding against this error as they ought to be?

Whenever we learn about any heresy in church, during school, or throughout our lives, let us not content ourselves with pointing the finger at other people and denominations who hold to such errors. We can find every heresy in our own soul. A self-righteous pope exists not only in Rome; he is close to home in our hearts. That old man is the worst of heretics, being both against Christ and against the law. Have you discerned him within?

Additionally, history reveals that the heresy of antinomianism has always plagued the church. As King Solomon said, “There is no new thing under the sun” (Eccl. 1:9b). While different men and women have introduced this heresy in various forms, the resulting conclusion has repeatedly been the same: It is not necessary to obey the law. Antinomianism has emerged most frequently throughout the history of the church as a reactionary heresy, taking its victim and promoter from one extreme to another, and from one heresy to another.

Specifically, antinomianism has been a reaction against works-righteousness. The apostle Paul fought against the Pharisaic and Judaizer notion that a man is justified because of his obedience to the law. While he was absolutely correct about justification by faith without the works of the law, there were those in his day who twisted Paul’s inspired argument to conclude, “Let us continue in sin, that grace may abound” (see Rom. 6:1ff.). Later, Martin Luther, along with the other Reformers, rightly preached against the Roman Catholic Church, insisting that a man is justified by faith alone without his works. But sadly, many who claimed to be his followers overreacted and began to teach that man is at liberty to live against the law due to his justification without his works.

The same antinomianism exists today. In evangelical churches across the world, many so-called Christians and Reformed or Calvinistic Christians believe that since the Savior has died to save sinners, there is no need to serve Him as Lord in obedience to His law. Believing in Jesus is necessary, but living for Him is not. “Give us faith, not religion!” is the outcry. As a result, the gospel is completely (and wrongly) severed from the law. Antinomianism has always been a real danger among those who hold firmly to the gospel of grace.

But what about us? If antinomianism has always plagued the church, if it is alive and thriving all around us, and if it is the very character of our sinful nature, would it not be foolish to dismiss it as a harmless enemy? Would it not be foolish to imagine that it is merely a big word that classis and synod delegates discuss in ivory-tower meetings? Should we not beware of this lie among us and within us? Should we not be active in our fight against antinomianism?

I warn you of this heresy because I think that Protestant Reformed people—especially our young people—are susceptible to it. This is not an accusation against our young people; neither is this to say that our young people are less holy than others. But the susceptibility to this heresy is due to the strong emphasis on salvation by grace alone that our churches make. To be clear, our strong emphasis on salvation without works is a good thing. Reformed doctrine does not cause antinomian teaching. We need to maintain an emphasis on the gospel of grace for the glory of God. Yet history proves that it is within churches such as ours that there occur frequent sinful overreactions leading to antinomianism. Since we as Protestant Reformed Churches so strongly emphasize that works of the law are not the basis of our salvation, we especially must be on guard for this lie. The antinomian error that we are susceptible to sounds a lot like the truth even though it is extremely different. It teaches that works of the law are a not a necessary part of our salvation. Do you see the difference?

How well did you do on the quiz above? All of the statements have within them the heresy of antinomianism, making each of them false. They all contain an element of Reformed truth, but they all misuse this truth to conclude that works of the law are not necessary. A good practical way of guarding against antinomianism would be to take the ten statements above and, with your friends and family, discern both the truth and the lie that each contains.

Remember, however, that antinomianism is found not only in theological statements but in the heart. There is something called “practical antinomianism.” This is not something you teach or even speak about, but it is what goes on within your minds. Practical antinomianism is defined as any heart’s misuse of true doctrine to excuse our sin. Listen for the antinomianism of your old man and fight against it. “I know I should not watch this, click on this, gossip this, do this…, but I am going to anyway because I know God will forgive me.” Have you caught yourself thinking this way?

The antinomian old man skews the doctrine of forgiveness to allow for sin. Perhaps you have an idol in your life: a sport, a phone, a drink, a person, or something else. You know this addiction is wrong, and yet you do not want to repent. Without any sorrow or a desire to change, you think, “Oh well, Jesus died for me.” This is practical antinomianism’s twisting of Christ’s atonement. You might misuse the doctrine of God’s sovereignty: “God is sovereign over me and my sin. If He wants me to turn, then He will work in me to do so in His time. I need not try.” Perhaps you might abuse the doctrine of church membership: “At least I am a member of a true church, a Protestant Reformed Church even. And I attend services twice on Sunday. This makes up for my disobedience.” Maybe you misunderstand the unconditional covenant: “God’s unconditional covenant means that I cannot do anything to get in or get out of my relationship with God, thus, obedience to the law does not matter.” We might misapply the doctrine of sin: “I am totally depraved anyway, so I really cannot help it if I sin.” Or we may wrest the doctrine of election and preservation: “God will preserve His elect, so I do not mind putting myself in some kind of temptation, since I know He will preserve me from hell.”

These thoughts are not necessarily what we might express aloud, but they are the secret wickedness of the human heart. They are perverse, hyper-Calvinistic twistings of true doctrine, blaspheming of God’s name, and falsifying of the Scriptures. This antinomianism is the abuse of truth that “men of perverse, impure and unstable minds wrest to their own destruction” (Canons of Dordt, I/6). When we find such perversity in our hearts, let us fight to mortify that old man. “What is the mortification of the old man? It is a sincere sorrow of heart that we have provoked God by our sins, and more and more to hate and flee from them” (Heidelberg Catechism, Lord’s Day 33).

The against-the-law mentality of antinomianism is closer than you think. To imagine it as a distant foe is to fall to its deception. It has always been a heresy hard on the heels of the heresy of works-righteousness. The young and old members of the church militant must stand on the way of truth, always watching for the ditches on either side—the legalism of works-righteousness and the license of antinomianism. They are not merely ditches but pits to hell itself. To escape these, we must continually repent of both, and in doing so, turn in faith to Him who said, “Think not that I am come to destroy the law, or the prophets: I am not come to destroy but to fulfil” (Matt. 5:17). Christ Jesus has come to fulfill that law by first obeying it for our righteousness, and then working obedience in us through His Spirit. True faith believes in Him who has done both. 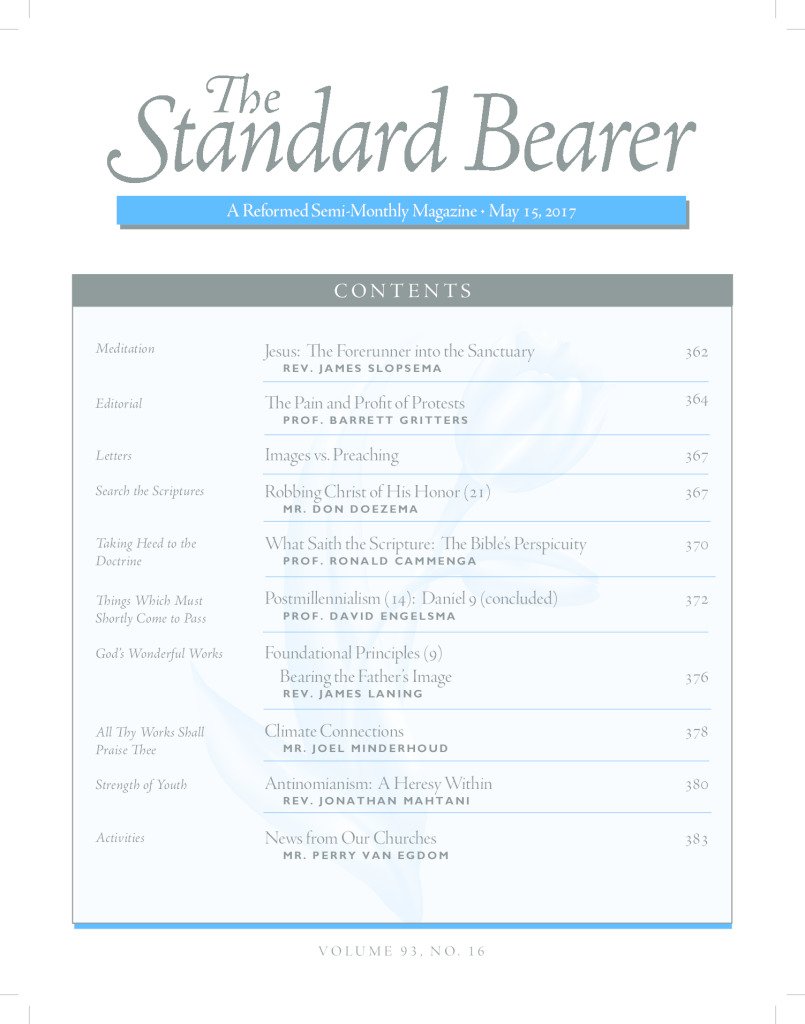