Annual Report of the R.F.P.A.

Annual Report of the R.F.P.A.

Looking back at the activities and accomplishments of the R.F.P.A. during the past publication year, what can be more properly said than that our God is ever Faithful, ever Sure.

Volume 58 of the Standard Bearer is history; but putting our hand to the plow, we go forward in the confidence that, if the Lord wills, Volume 59, page by page, issue by issue, will go forth to the ends of the earth.

Volume 58 featured two special issues on doctrine. That meant that their entire contents were devoted to one particular Scriptural and Confessional truth: March 1, 1982—The Doctrine of the Church; May 15, 1982—The Doctrine of Predestination. Unique, in distinction from many religious publications, is the fact that all the writers write spontaneously in complete unity and harmony of interpretation and understanding of these doctrines. The special issue of December 1, 1981 gave our readers a bird’s eye view of the history and makeup of the Standard Bearer, and also insight into and pictures of the R.F.P.A. book publishing activities. Rereading these issues would be beneficial and a joy.

The Annual Financial Report speaks for itself. A good working balance is on hand. Beginning in January 1982, the cost per issue of the Standard Bearerincreased 11%. Our Protestant Reformed Churches, societies, and individuals both inside and outside our denomination continue to meet these increases head-on. Generously they contribute what is not met by the subscription price, the latter not being adequate even though the Board increased the cost to $10.50 per year. Thanks to all for your continued spiritual and financial support!

Last year we reported that four young men were busy compiling an index to all the Standard Bearer volumes. Their program is to make a complete textual, title, and subject index. This will probably be published in syllabus form by the end of the year 1982. Delays have been encountered, and progress has been slower than anticipated.

The Board granted a request from a Pastor Philip Rawson (in England) to act as agent for the Standard Bearer literature and books. Mr. H. Vander Wal, our Business Manager, is in contact with the brother. The Board hopes to establish the same type of program with Rev. Tom Reid of the Reformed Presbyterian Church of Ireland.

From the Permanent Publications Committee, the Board reports the following: 1) 340 Book Club Members. We take this opportunity to urge and encourage anyone interested in buying good, sound, edifying books to join this Club and buy at discount prices. 2) Three books have been published since last September: We And Our Children, by Prof. H. Hanko and In The Sanctuary and The Wonder of Grace by Rev. H. Hoeksema. 3) The Church Order book revision is nearly completed. Rev. Joostens is finishing an index. 4) 1000 additional copies of Behold, He Cometh! were bound. 5) The Bible Story Book project is progressing well. All the stories have been completed, and the artist is working on the illustrations. The Publications Committee will be making a concentrated effort not only to gain more Book Club members, but also to promote its fine publications.

Information has it that Wobbema Press is no longer under the ownership of Peter Wobbema. Through the years a pleasant business relationship existed. We thank him for his conscientious concern and service. We trust the new owners will continue in that atmosphere and relationship.

To our Editor-in-Chief, Department Editors, Guest Writers, Business Manager, and all others who contributed their time and talent to make possible theStandard Bearer and all our other publications, we extend a sincere word of appreciation.

In conclusion the Board reminds itself, its writers, and its readers of the following Scripturally based truth from the pen of an aged and faithful warrior, Rev. C. Hanko: “The pulpit and the printed page must never grow weary of sounding the trumpet, arousing the church to battle, and warning her of the foes within and outside the gate.” This appeared on the cover of the December 1, 198 1 issue and is worthy of repeating.

(Editor’s Note. At the annual meeting of the R.F.P.A. recently I had the opportunity to see several pages of the computer printout of the proposed index. This is a tremendous project; and when it is completed, it will surely be a valuable asset for anyone who wants to do some study and research in the past volumes of theStandard Bearer. I, for one, am eagerly awaiting completion of the project.) 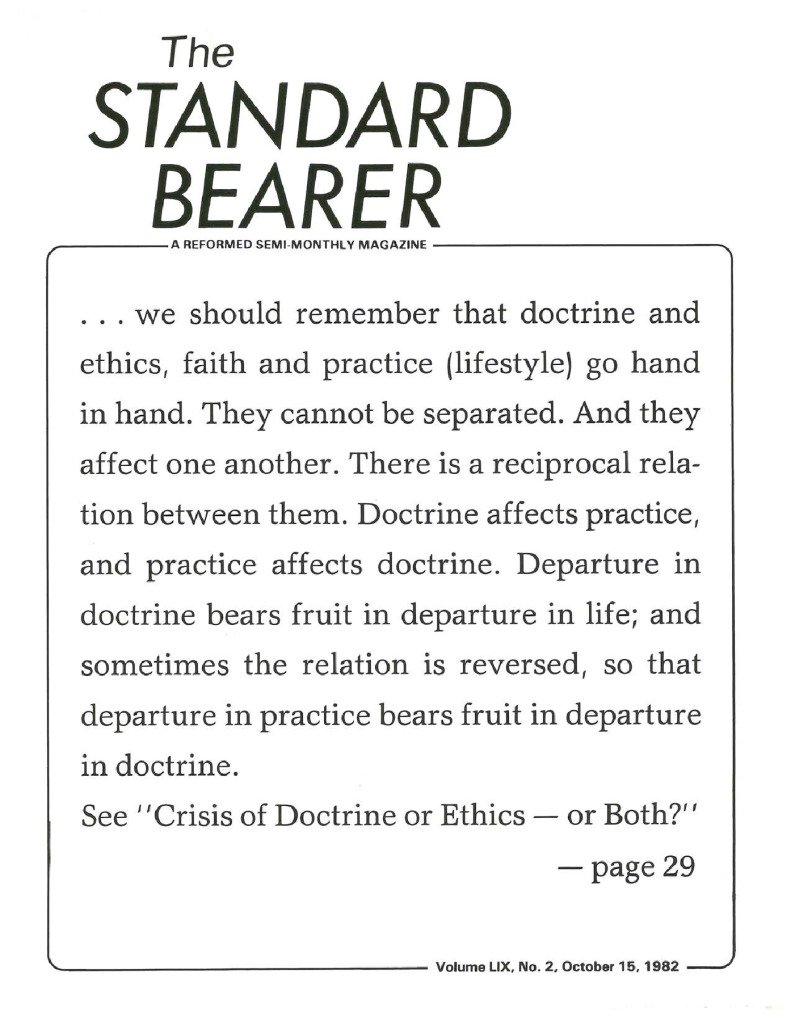