My God, my God, why hast thou forsaken me? why art thou so far from helping me, and from the words of my roaring? O my God, I cry in the day time, but thou hearest not; and in the night season, and am not silent.” Psalm 22:1, 2

There are many difficulties confronting us when we set ourselves to write something about this Psalm, difficulties of a various nature, exegetical, historical, theological. A man could write a rather long treatise about the difficulties alone.

Try to write something about this Psalm, restrict­ing yourself to this theme: What did David suffer when he wrote here as he did? For instance, whatever could have happened to David when he complains: “Thy have pierced my hands and feet”? Or this: “they part my garments among them, and cast lots upon my vesture”?

Yes, we must meet all kinds of difficulties here.

The Psalm is superscribed as “Aijeleth Shahar”. Its author is David. Aijeleth Shahar means “hind of the morning”. David, in a measure, and Christ, fully, are considered fair game for every wild and foul beast to hunt Him on the mountains if haply they may rend Him to pieces.

David certainly must have been in terrible straits at the time of this Psalm. We can tell this by the im­passioned plea of the Psalm itself, by the opening verse that speaks of utter forsakenness, by the repeat­ed, My God, My God!

We are left in the dark as to the exact reason for this state.

Do we say too much when we presume it to have been occasioned by Saul? Saul certainly has been the arch enemy among all those that would seek his life. Saul hated David more than any of his enemies. And when we pursue the story of David’s life we note that this hunting went on from month to month, from year to year. When David found rest for a spell in some mountain, glen or cave, an enemy would come by stealth to Saul and spit out his poisonous information: Doth not David hide himself in our hills? And the army of Saul would gather for the hunt. David, the hind of the morning.

And all the while David was not really dangerous to Saul. He never did him any wrong. More, he would even defend him when Saul’s life was given to him as on two occasions. He held up the slip-of his mantle and cried: My father, see and behold! I do not seek your hurt! And for a moment Saul, that devil, was persuaded: he wept a few salty tears on David’s neck! Beware, David! That embrace is as slimy as the embrace of a serpent. It reminds me of the em­brace of Judas kissing Jesus: Rabbi, Rabbi!

But we see much more in Psalm 22 than Saul, Saul’s cohorts on the hunt, Filistia and the other heathens surrounding God’s anointed.

You can see all that and fail to receive your answer to the question: What means this crying about God’s forsaking of David?

David’s agony because of the bulls, lions, dogs; the wicked, the mockers, the enemies is aggravated by a consciousness of the lack of God’s communion. Judging from the words of this cry he sought for sal­vation, God’s nearness, quietness in the soul because of God’s communion, and answer and peaceful silence.

But God seemed far, O so far away.

In the daytime he cried and roared in the night season. All to no avail. God held Himself away from David.

And the enemy noted this deplorable situation. Listen: They laughed him to scorn, they shoot out the lip, they say: Did not David trust in God? Well, let God help him, that is to say, if it is true that God has delight in David! But it is plain that He has not! David, where is Jehovah now?

And they rejoiced in David’s agony.

And while sobs are racking David’s tortured breast, he meditates on the past. Jacob, his father, also was in agony. And he cried in Peniel. Yes, muses David, Jacob and on occasion Abraham also, they trusted in the same Jehovah. But here is the difference. Since last week when I started by roaring and crying agony to God, I have been without an ans­wer. They trusted, and in the case of Jacob an angel of God came down and blessed him in the morning. He was strengthened to meet Esau.

But I? I am no longer a man. I am a worm. I crawl in the dust and there is no soothing silence for me. God hears me not.

And who am I? Am I not David, the beloved of the Lord? Was not my mother that sweet Moabitish maiden who always charmed my heart when I read of her? A sweetness that was inherited by my grand­mother and mother? Did not my mother go to Je­hovah when she perceived that her arms were filled with me, the future King of Israel? And how did my mother act toward Thee, O Jehovah? She began to pray and she cast me into Thy loving arms.

And Thou hast heard. Because when I was but a small lad I was made to trust in Thee and hope in Thee, even as the Fathers.

I took Thee with me in the fields when still young and tender. And while the wooly sheep grazed I would meditate on Thy greatness and begin to sing. Pre­sently the melody, the correct meter, came to me, waf­ted on the winds of Bethlehem-Judah, and I began to play and sing! O God, dost Thou not remember how I used to sing, surrounded by unbroken silence: ‘t Hijgend hert der jacht ontkomen; schreeuwt niet sterker naar ‘t genot van de frissche waterstroomen; dan mijn ziel verlangt naar God!

And I know that I have never hoped (and that means that I possessed the yearning for Thy communion) in vain. Because even before my thirsting heart came to the last stanzas of my song, I knew al­ready that I would presently close with: Ik zal God, mijn God nog loven! And happy, divinely happy, I would grow silent and go home with the sheep.

But now I am a worm and no man.

Besides having all these warriors to contend with, Thou gavest me no answer.

Even now, I am poured out like water. There is no strength left in me. A person should be able to sleep nights. When I rise from my couch in the morn­ing I present a sorry spectacle for the beholder. I may tell all my bones: they look and stare upon me.

And it is a good thing they cannot see any farther than my outward appearance. Within I am like wax. My heart is melted within me. My bones feel out of joint. There is no strength left in me.

And all I hear around me is sneering, mocking, derision, contempt.

And I could bear all that, my Lord. Only, be Thou not far from me, haste Thou to my help!

Abraham was helped when he trusted and hoped, and Jacob found his God. Israel did not remain in Egypt. Moses was the strong arm of Jehovah. There­fore, my Father, ride upon the clouds to my help!

And David did find his God again.

He prophesies of it from verse 22 on. It is the break in this Psalm.

He visualizes himself delivered from all his sor­rows. There will come a time when he shall tell all his brethren that God finally came. And such time he will find all his praises concentrated on one thing: Hallelujah! the praises of God! Well, it could hardly be anything else. That is the Omega of all life and living.

Yes, in the midst of the congregation of Israel David will stand. He visualizes them even to the end of the world.

Righteousness, glory and utter redemption will come. Even through him as an instrument. All the ends of the world will at first shudder when they hear David’s story of Psalm 22. But the end of the song will be: that God finished the agony. Incidentally, the last phrase of this Psalm is the same as Jesus’ final cry: It is finished!

Yes, it is finished for David. He grew calm; could even smile again. His part in the present, heavenly, glorious concert is not small. I can even imagine that David will sing some solo parts. But His great Son would later quote him. And such quotations.

Throughout the worlds and the planets and the suns there resounded much later that agonizing cry to God: O why, why hast Thou forsaken Me? In utter darkness.

the exact distance from the airplane to the batteries on the ground.

I would implore you not to try and compute the distances around Golgotha. That cry came from a great abyss. It sounded from a sphere that sometimes is called hell. Your reckoning will be a mock­ery anyhow. The instruments will break. The roar­ing is too intensive.

A good man has said some years ago: When that cry resounded on the place of a skull, a hand from hell was extended to the heavens and it laid itself on the steps of God’s temple. And here is the miracle. That hand from hell did not besmirch the steps.

Much later, much later, (theologically we speak of eternal death of which the cry is the echo) the gold­en gates opened and a beckoning hand asked Jesus of Galilee: Come up hither, My Son!

The greater David, no longer a worm, ascended the steps.

Psalm 22 finds Him at last in the midst of the congregation. And David will stop his solos. And heaven experiences a hush. David, God’s beloved Son, will make an announcement in singing such as no earthly choir ever could render: I will proclaim Thy blessed Name unto all the brethren.

Instructions in singing will follow. They have waited until all the members of God’s symphony have arrived.

John at Patmos was given the pre-audition. And he has told you. “And after these things I heard a great voice of much people in heaven, saying: Alle­luia!”

I am slow in leaving this spectacle. The heavenly version of Golgotha, the heavenly rendering of Psalm 22 is so engrossing, so surpassing in beauty.

Slowly on I begin to understand why the Holy Ghost calls David the sweet singer of Israel. 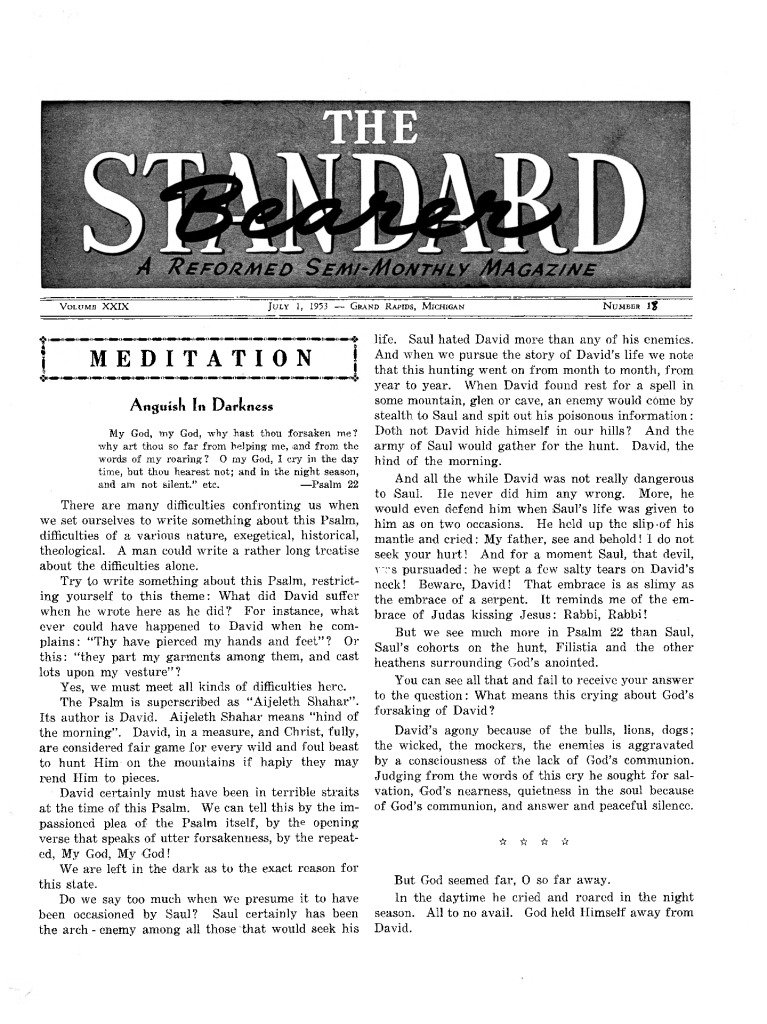