“We believe that the Father, by the Word, that is, by his Son bath . . . also created the angels good, to be his messengers and to serve his elect; some of whom are fallen from that excellency, in which God created them, into everlasting perdition; and the others have, by the grace of God, remained steadfast and continued in their primitive state. The devils and evil spirits are so depraved, that they are enemies of God and every good thing, to the utmost of their power, as murderers, watching to ruin the Church and every member thereof, and by their wicked stratagems to destroy all; and are, therefore, by their own wickedness, adjudged to eternal damnation, daily expecting their horrible torments. Therefore we reject and abhor the error of the Sadducees, who deny the existence of spirits and angels: and also that of the Manichees, who assert that the devils have their origin of themselves, and that they are wicked of their own nature, without having been corrupted.

Approximately two-thirds of this article on Creation is devoted to the creation of the angels, their function, and the fall of some of them. In this respect theConfession reflects something of the times in which it was written. During the Middle Ages and on into Reformation times many were preoccupied with the mysterious realm of the spirits. Much was made of both the good angels and the fallen evil spirits. The trouble was that all of this was mixed with a good deal of superstition and wild speculation which went far beyond the givens of the Scriptures. This accounts for the relatively detailed presentation of the truth of Scripture on this subject given in Article XII.

We do well in our own day to devote a bit of study to this whole matter. Today the pendulum has swung to the opposite extreme from Reformation times. Now very little attention, almost none at all, is given to the truth concerning the angels and the devils. Many know almost nothing about them. Many, too, deny their very existence. Let it be understood the angels are real creatures of God who serve God’s purpose in the salvation of His elect in Christ. The devil is also real! So is the host of evil spirits who with Satan “left their first estate” (Jude 6). The Bible has something to say concerning both and, therefore, we ought to know that teaching. As we turn to the Scriptures we ought to heed the advice of John Calvin who writes: “Let us remember here, as in all religious doctrine, that we ought to hold to one rule of modesty and sobriety: not to speak, or guess, or even to seek to know, concerning obscure matters anything except what has been imparted to us by God’s Word. Furthermore, in the reading of Scripture we ought ceaselessly to endeavor to seek out and meditate upon those things which make for edification. Let us not indulge in curiosity of the investigation of unprofitable things.” (The Institutes Of The Christian Religion, Book I, Chapter XIV, Section 4)*

The Confession correctly affirms that these spiritual beings, including also the fallen angels, the devils, were created by God. “He also created the angels good, to be his messengers and to serve his elect; some of whom are fallen from that excellency . . .” As created beings the angels are as fully dependent upon the will of God as any other creature. They all were created good in the beginning, as is evident from Scripture. In Genesis 1:31 we read: “And God saw everything that he had made, and, behold it was very good.” Just when the angels were created we do not know. Some think the angels were created on the first day of creation week. They base this conclusion on Job 38:6, 7, where Scripture says: “Whereupon are the foundations thereof fastened? or who laid the cornerstone thereof; When the morning stars sang together, and all the sons of God shouted for joy?” H. Hoeksema offers the following comment on this passage: “From this passage the conclusion has been drawn that the angels were created on the first day, although it must certainly be said that the text offers no strict proof for this contention and that if we may conjecture that there is a parallel between the creation of the earth and that of heaven and the heavenly beings, it would seem more natural to suppose that the angels were created on the sixth day. But for the time of the creation of the angels we have no proof in Scripture.” (Reformed Dogmatics, p. 249)

The Bible says several things about the angels. They are spiritual beings who do not have flesh and bone. (Luke 24:39) There is no marriage among them: “For in the resurrection they neither marry, nor are given in marriage, but are as the angels of God in heaven.” (Matthew 22:30) These spiritual beings are personal beings with intelligence and will, for Scripture speaks of their intense interest in the “sufferings of Christ and the glory that should follow which things the angels desire to look into.” (I Peter 1:11, 12) Although they do not know all things, Scripture does indicate that they know more than we. (cf. Matt. 24:36) As is evident from the fall and consequent judgment of Satan and the devils and evil spirits (cf. Jude 6) the angels possess a moral nature, and just as we they are answerable to God. We know, too, that the angels constitute a mighty host. The Apostle John writes: “And I saw, and I heard the voice of many angels round about the throne and the beasts and the elders: and the number of them was ten thousand times ten thousand, and thousands of thousands.” (Rev. 5:11) Apparently, too, there is distinction of class or rank among the angels. Scripture speaks of the “cherubim” who reveal the glory and majesty of God (Gen. 3:24) and of the “seraphim” who stand about the throne of God. (Isaiah 6:2, 6) There are “archangels” who shall accompany the Lord when He comes in final judgment. (I Thess. 4:16) Two of these latter are mentioned by name: Gabriel (Luke 1:19, 26) and Michael. (Jude 1:9; Rev. 12:7) In addition we read of “principalities and powers, of thrones and dominions in the heavens.” (Eph. 3:10 and Col. 1:16)

The Confession emphasizes two of their tasks. They are messengers of God. Their very name “angel” in both the Hebrew and the Greek means “messenger”. They are present at special revelations of God, such as the giving of the Law to Moses. (Gal. 3:19) They appeared at crucial points in the history of redemption. Several times the angels appeared to Abraham and other of the patriarchs, to Israel when delivered out of Egypt, and in the days of the exile and restoration. They are mentioned especially in connection with the birth, ministry, suffering, resurrection, and ascension of Christ. In all of this the angels were created “to serve the elect.” Of this the Bible speaks often. Angels are “ministering spirits sent forth to minister for them who shall be the heirs of salvation.” (Heb. 1:14) Thus we read that the angels: rejoice over the conversion of sinners (Luke 15:10); watch over believers and preserve them from harm (Ps. 34:7; Ps. 91:11); care for God’s little ones (Matt. 18:10); are present in the church (I Cor. 11:10); and seek to learn something of the manifold grace of God (Eph. 3:10). Thus do God’s messengers serve in the saving and gathering of God’s Church. And together with them the people of God look forward to that great day when they shall stand before God’s throne and cry with a loud voice: “Salvation to our God which sitteth upon the throne, and unto the Lamb.” (Rev. 7:9-17)

The Article also speaks of the fall of some of the angels. The details of this fall are not given in Scripture, for it is neither necessary nor profitable for us to know them. Evidently Satan was moved by pride and followed by a host of angels, who became evil spirits or devils. (Cf. I. Tim. 3:6 and Jude 6) The two principal names of the devil are Satan, which depicts him as the enemy, adversary of God and His cause in Christ, and devil, which emphasizes that he is the great liar or deceiver of men. He is also called “the prince of this world” (John 12:31; John 16:11; I Cor. 4:4), “the prince of the power of the air, the spirit that now worketh in the children of disobedience.” (Eph. 2:2; Eph. 6:11, 12)

We ought never underestimate the power of Satan and his evil spirits, for, as our Creed says, “they are so depraved, that they are enemies of God and every good thing, to the utmost of their power, as murderers, watching to ruin the Church and every member thereof, and by their wicked stratagems to destroy all . . .” Indeed we must “be sober, vigilant; because our adversary the devil as a roaring lion; walketh about, seeking whom he may devour.” (I Peter 5:8). At the same time, however, we must not be discouraged in the battle, for Christ is Victor also over the devil (Heb. 2:14). Already now the devil and his evil spirits are “cast down to hell, and delivered into chains of darkness, to be reserved unto judgment.” (II Peter 2:4, Jude 1:6) Powerful as he may be, the devil cannot touch us apart from the will of our heavenly Father. (cf. the Book of Job,Revelation 20) Besides, “they that be with us are more than they that be with them.” (II Kings 6:16) In that confidence the believer “fights the good tight of faith” (Eph. 6), “giving no place to the devil.” (Eph. 4:27) Calvin puts it well when he says: “The fact that the devil is everywhere called God’s adversary and ours also ought to fire us to an unceasing struggle against him.. For if we have God’s glory at heart, as we should have, we ought with all our strength to contend against him who is trying to extinguish it. If we are minded to affirm Christ’s Kingdom as we ought, we must wage irreconcilable war with him who is plotting its ruin.” (Institutes, Book I, Chap. XIV, Sec. 15)

The article concludes by rejecting the errors of the Sadducees and the Manichees. The former denied the whole realm of the spirits and thus, too, the resurrection from the dead. The Manichees taught that evil is in matter, or is matter itself. The only escape from evil is escape from this creation. If a man wishes to escape evil he must separate himself from the earthly, even from his flesh. He does this by the power of his mind. For this reason Manicheeism taught that the devils could not have fallen or been corrupted, but originated by themselves and were wicked by virtue of their nature. Both of these errors are rightly condemned for they clearly stand in conflict with the teaching of the Word of God. 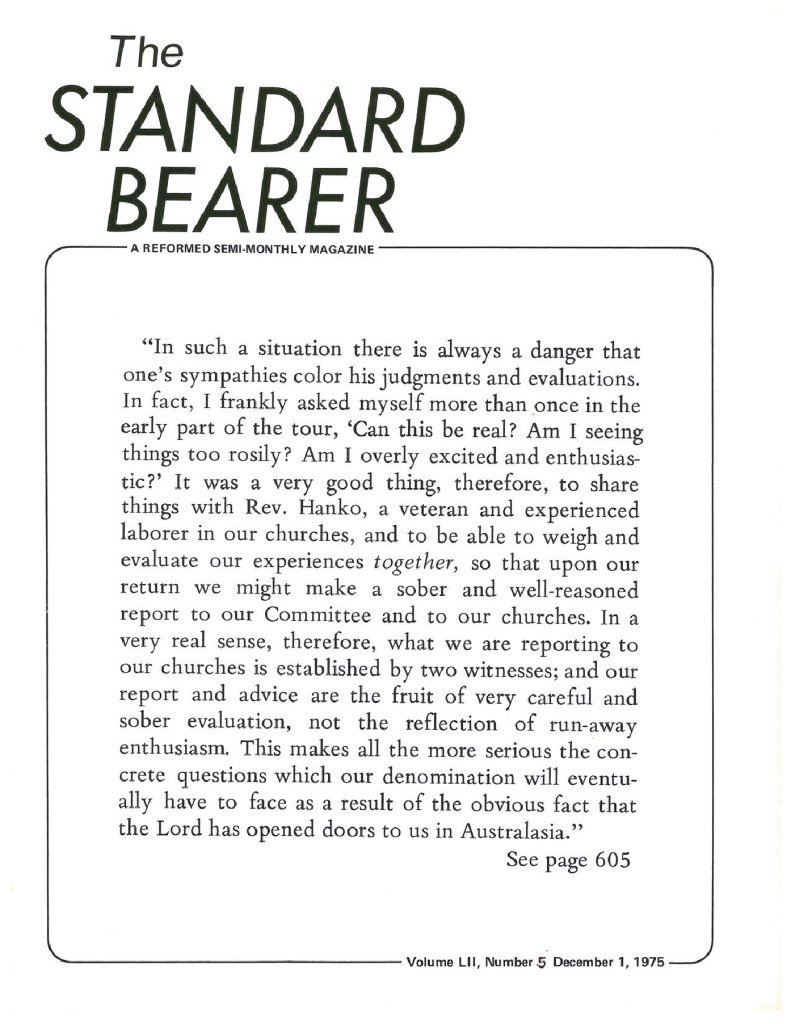