And Now: What About Christmas?

And Now: What About Christmas?

Last time I presented two letters which objected to the current celebration of Christmas. You have been given time to think about these letters. What have you concluded? Have you talked this over with your family and friends?

I also have some comments. I do not care to be placed in a position where I am obliged to defend Christmas as it is celebrated today, yet I would frankly state that I am not ready to throw it out. Some of the points of the letters were very valid, but some of the reasoning is not correct, it seems to me.

1. The debate concerning the date of Christ’s birth (and no one has determined that with any degree of certainty) and the advisability of celebrating a certain day has been debated for more than 1600 years.

2. The first record of Christmas celebration on December 25 dates back to 336. Hippolytus is the man credited with having first set the date. It is also a matter of debate whether the date was set because of the Roman pagan holidays, as the first writer would have it (The New Schaff-Herzog Religious Encyclopedia).

3. That many of the current practices at Christmas time can be traced to pagan celebrations appears to be true.

4. That the Reformers, for the most part, opposed the celebration of Christmas seems also to be true.

5. Therefore I also, on various occasions, have given speeches and written articles presenting much of the information the letter writers did, but came to different conclusions.

Concerning the celebration of Christmas, I could point out that the church order of the Reformed churches have required that celebration (article 67 in our Church Order). Monsma and Van Dellen in their “Church Order Commentary” (Second edition, 1949) write concerning this article:

During the early days of the Reformation some Reformed localities observed only Sunday. All special days sanctioned and revered by Rome were set aside. Zwingli and Calvin both encouraged the rejection of all ecclesiastical festive days. In Geneva all special days were discontinued as soon as the Reformation took a firm hold in that city. Already before the arrival of Calvin in Geneva this had been accomplished under the leadership of Fare1 and Viret. But Calvin agreed heartily. And Knox, the Reformer of Scotland, shared these same convictions, he being a disciple of Calvin in Geneva. Consequently the Scottish Churches also banned the Roman sacred days. . . .

Consulting the present article (67) we find that it prescribes the observation of several special or festival days. How is this to be explained? The government of Holland was loath to set all the Christian festivals aside inasmuch as many of the people delighted in these days for the sake of their pleasures and because the government officials and employees hated to part with a number of holidays which afforded them rest and recreation. Rather than see these days given over to the danger of abuse and frivolity, the Churches accommodated themselves to circumstances and began to celebrate these days after a fashion. Thus the Synod of Dordt, 1578, Article 75, declared in substance that it would be desirable to celebrate Sunday only according to God’s ordinance. But, inasmuch as Christmas Day and the day following upon Christmas, as well as the days following upon Easter and Pentecost and in some places also New Year’s Day, and Ascension Day were legal holidays by authority of the governments, the Ministers should preach appropriately on these days in order to turn a fruitless and harmful idleness into a holy and profitable exercise.

The above suggests that our forefathers decided that a spiritual celebration on the day of Christmas would tend to reduce and perhaps eliminate the purely secular celebrations of some Christians. Perhaps such argument speaks of the “hardness of heart” of our forefathers which requires such measures to counteract the influence of the world. Yet, what would happen today if the church completely ignored Christmas? The legal holiday and the celebrations continue regardless. Is it not better to bring people of God into His house of worship to commemorate in the light of Scripture the birth of His Son into our flesh? Will this also not be a constant reminder to children of God that they are not to celebrate as the world commonly does about us? Is this an argument from weakness? Should this sort of celebration be necessary for the faithful Christian? It might indeed well be debated. I would personally prefer to use the day to remind ourselves of that distinction between the church and the world when it comes to commemoration of Christ’s birth.

Is it wrong, per se, to set aside a date for the celebration of Christ’s birth? Granted, we do not know the exact date of His birth—and most likely it was NOT on December 25—is it wrong to celebrate on a specific day? Scripture nowhere requires celebration of the day. A Christian does not violate Scriptural principles if he does not celebrate at all on this date. But Scripture does not forbid celebration either. The only requirement of Scripture is, that what is practiced must be done to the glory of God.

I believe the principle expressed in Romans 14:5, 6applies: “One man esteemeth one day above another: another esteemeth every day alike. Let every man be fully persuaded in his own mind. He that regardeth the day, regardeth it unto the Lord; and he that regardeth not the day, to the Lord he doth not regard it. He that eateth, eateth to the Lord, for he giveth God thanks; and he that eateth not, to the Lord he eateth not, and giveth God thanks.” Call this “Christian liberty” or call it a matter of the “adiaphora,” the principle applies that what is done, MUST BE DONE to the glory of God. If it can be shown that the Christian CAN NOT observe Christmas Day to the glory of God, only then ought we to condemn every form of celebration.

What about many of the Christmas practices? Again, I do not want to be in a position of approving much of what is done at Christmas time—by Christians too. There is evident gross excesses, wrong practices, sinful lusts. However, the child of God must again keep in mind the Scriptural principle: whatever he does, must be done to the glory of God. If such is not the case, it is sin (Rom. 14:23). I believe that the Christian is not forbidden the use of those things which may have had something to do with paganism in the past. Because pagans made use them of evergreen trees, may I not therefore ever use them for celebration or decoration? Because pagans used “mincemeat, etc.”, may I therefore never use mincemeat at Christmas (or at other times)? Because gifts are used to satisfy lusts, to defraud, to blind the eyes of judges—may I not therefore give gifts? Because the word “Christmas? means: “Christ’s mass,” does that eliminate the celebration of that day for me? (What about “Sun”day? Or, “Thurs”day?) That there are practices which are per se wrong, I would not deny. That there is often, an evil imitation of the world about us, I readily admit—to our shame. That we do not always celebrate Christmas to God’s glory is almost self-evident. But we must take care lest we see things as sinful in themselves. Again, the instruction of God’s Word concerning the use of meats which had been offered to idols is useful. In I Cor. 8:4, 5, 8, “As concerning therefore the eating of those things that are offered in. sacrifice unto idols, we know that an idol is nothing in the world, and that there is none other God but one: For though there be that are called gods, whether in heaven or in earth, (as there be gods many, and lords many,). . . . But meat commendeth us not to God: for neither, if we eat, are we the better; neither, if we eat not are we the worse.” The apostle goes on, however, in warning lest one offend the weaker brother.

The point is, we can make proper use of the things in the world. How others have misused them must not determine my own proper use of these same things. We surely then can not condemn one because he has a “tree” or eats “mincemeat” in Christmas celebration.

The above is not to condone the excesses of Christmas celebration in which we easily involve ourselves. How would I like to see Christmas properly celebrated? I could suggest:

1. If and when we celebrate the day, there ought to be that strong contrast between the church and the world. They have really nothing spiritual in common on this day. We ought to concentrate on that wonder of the Incarnation which must lead to the cross.

2. Our celebrations ought not to be after the fashion of the world. I’ve often wondered why we should not rather give gifts to those in special need rather than giving of gifts to those who will give in return again.

3. In use of decorations and feasting, this must be done (if done at all) to the glory of God and for our spiritual profit.

4. Those who are spiritual will make constant self-examination with respect to their use of this special day. Let us never blindly insist: “We’ve always done it this way—therefore it is right and proper to continue this way of celebration.” What is done must be out of a living faith and to the glory of our God. Is that how you celebrate Christmas? 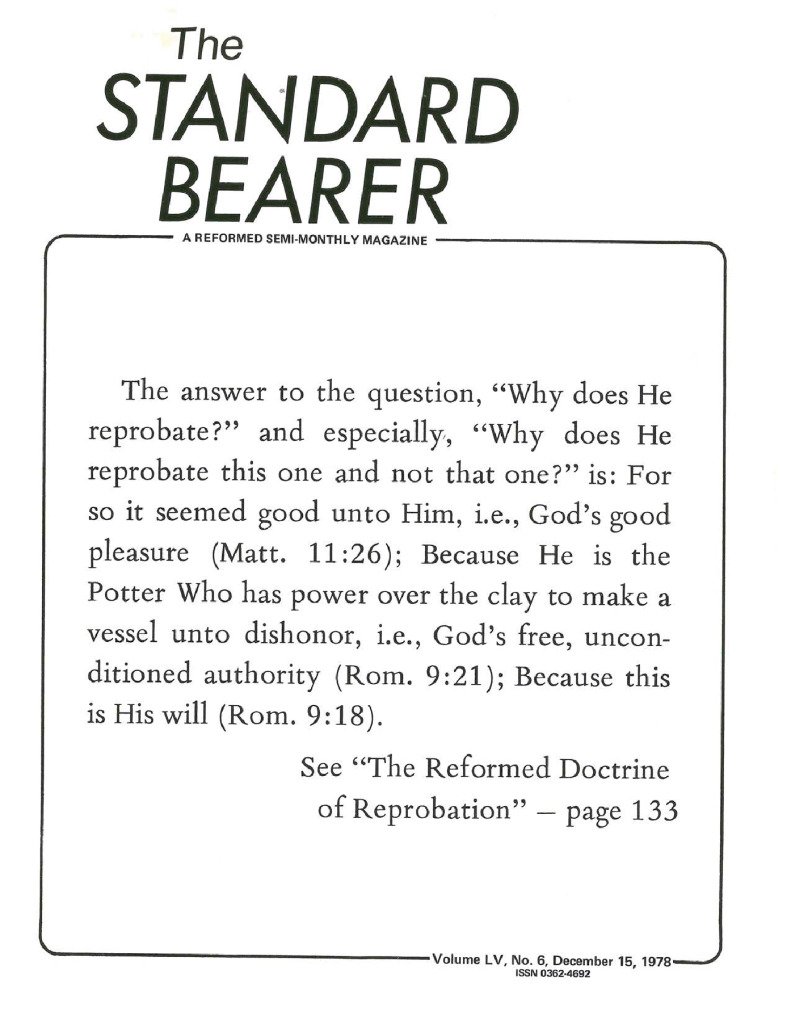