An Open Letter to the Protesting Christian Ref. Church

To the Editor of the Standard Bearer

Please give us space in your paper to place these few lines of protest, for it is for the efforts on our part for the reunion of the congregation of which we are members, with the Protestant Reformed Church Denomination, that we are placed under censure and as members of this independent congregation, and by the action of the consistory of said congregation, we have no other way of voicing our protest and neither do we have any appeal to any Classis or Synod.

Thanking you in advance, we remain,

Open Letter to the Consistory of the Protesting Christian Reformed Church of Kalamazoo, Michigan.

Whereas you have completely closed the way to us, members in full communion, to raise our voice in protest against your arbitrary way of exercising so-called “discipline” and even have denied us the right to ask questions, when you against all good manners slammed shut the door of the consistory room in our face when we presented our protest, and also questions by Mrs. Hoppenbrouwer in regard to these matters, at your consistory meeting of June 24th, so have you forced us to openly admonish you in regards to your dishonorable way of doing and we advise you to retrace your steps and undo the injustice you have done to us. If this will not be forth-coming, we shall be obliged to publish all your doings in regards to this affair, because we have no appeal to a Classis or Synod and our appeal will be to the sense of justice of the congregation.

Furthermore the congregation should be informed of the facts, because this thing in question, is the affair of the congregation, n.l. the reunion with the Protestant Reformed Church Denomination. Because it is for the fact that we have been working and are working to that end, that we are placed under censure, without even receiving a warning. Certainly, no one would maintain that a member in June, all at once, without any admonition can be placed under censure, because in January he declined to have house-visitation, until the consistory treats the matter of the reunion with the above mentioned Denomination in an honorable and decent way. That certainly is not according to Reformed Church Law and good order. For if house- visitation is so very important, how is it that the family of P. Alphenaar for no apparent reason has had no such visitation this year. And stranger still, how is it that the family of Rev. H. Danhof has had no house-visitation at all, since we have been made an independent congregation, more than 15 years ago.

We are convinced that such so-called “discipline” is not binding before our God in heaven, but will become a curse to them, who, under a cloak of piety, apply the same, in order to maintain themselves in a wicked affair. And we finally warn the elders that they have to answer for this to our God, Who knows all, and again, elders, undo the injustice, so that the congregation may not suffer. 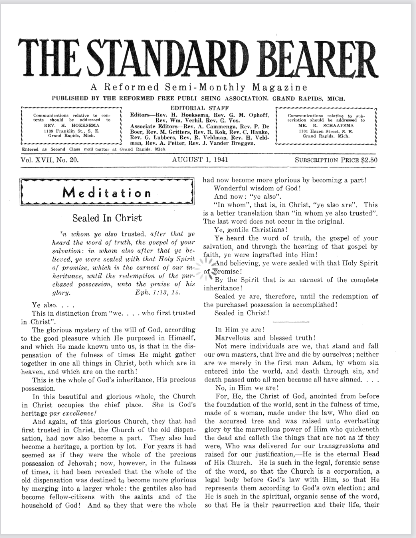