An Introduction to Proverbs (3)

Rev. Hanko is pastor of the Protestant Reformed Church of Lynden, Washington. Previous article in this series: December 15, 2008, p. 127.

The most important parts of the book of Proverbs are Wisdom’s three speeches, found in Prov. 1:20-33,Prov. 8:1-36, and Prov. 9:1-18. In those three speeches Wisdom identifies Himself as the Son of God and demands a hearing of all who come within the range of His voice. In those speeches is found the principal doctrinal content of Proverbs, the doctrine applied in all the wise sayings of the book.

The doctrine of eternal generation is part of the doctrine of the Trinity. It is the truth that Christ is the second person of the Trinity, the eternal and naturalSon of God (Heid. Cat., 33). He is not only born in time in our flesh out of the womb of Mary, but also eternally brought forth within the Trinity as the eternal Son. That doctrine is taught especially inProverbs 8:22-31:

The Lord possessed me in the beginning of his way, before his works of old.

Before the mountains were settled, before the hills was I brought forth:

While as yet he had not made the earth, nor the fields, nor the highest part of the dust of the world.

When he prepared the heavens, I was there: when he set a compass upon the face of the depth:

When he established the clouds above: when he strengthened the fountains of the deep:

When he gave to the sea his decree, that the waters should not pass his commandment: when he appointed the foundations of the earth:

Then I was by him, as one brought up with him: and I was daily his delight, rejoicing always before him;

Rejoicing in the habitable part of his earth; and my delights were with the sons of men.

Christ is the living Wisdom who is from everlasting, was with the Father before the worlds were created, and was brought forth before there was anything created.

That Christ is the eternal Son of God is the reason why He as Wisdom must be heard and obeyed. That He comes forth from the Father eternally means that He is the one through whom the Father reveals Himself. He is the source of all wisdom.

The doctrine of the antithesis, the second doctrine taught in Proverbs, is a part of the doctrine of God’s holiness and refers first to the fact that God is eternally separate from all evil. He is the one of whom Scripture says: “Thou art not a God that hath pleasure in wickedness: neither shall evil dwell with thee” (Ps. 5:4). He is “of purer eyes than to behold evil, and cannot look on iniquity” (Hab. 1:13). This doctrine is taught in the first part of Proverbs (Prov. 2:1-7:27) in the extended comparison that is found there between the wise woman and the foolish woman.

The comparison that is made in chapters 2-7 is all instruction from a father, whom we know to be theFather. He knows the difference between good and evil, between wisdom and folly, for He is the holy one, the one who is eternally separate from evil.

That doctrine of the antithesis is the foundation for the instruction that is given in the proverbs concerning the practice of wisdom and the forsaking of folly. Wisdom consists in heeding the good instruction of a Father who is holy and in keeping oneself from evil. The antithesis means in practice that we are holy as God is holy. Every proverb in Proverbs teaches the antithesis.

Wisdom does not only teach doctrine in Proverbs, but issues a call as well, a call that must be obeyed and that is the call of the gospel. As our creeds teach, the gospel did not begin with the sending of the apostles in the New Testament, but has always been heard. The Heidelberg Catechism reminds us that we know the Mediator

From the holy gospel, which God Himself first revealed in Paradise; and afterwards published by the patriarchs and prophets, and represented by the sacrifices and other ceremonies of the law; and, lastly, has fulfilled it by His only begotten Son (19).

The Canons of Dordt add:

What therefore neither the light of nature nor the law could do, that God performs by the operation of the Holy Spirit through the Word or ministry of reconciliation, which is the glad tidings concerning the Messiah, by means whereof it hath pleased God to save such as believe, as well under the Old as under the New Testament.

This mystery of His will God discovered to but a small number under the Old Testament; under the New (the distinction between various peoples having been removed) He reveals Himself to many, without any distinction of people (III/IV, 6, 7).

That call, even here in Proverbs, is universal. Wisdom tells us that His words are for all the sons of men (Prov. 8:4), but especially for men as sinners, that is, as fools (Prov. 1:22; Prov. 8:5, 36; Prov. 9:4). They are for everyone who comes within the range of Wisdom’s voice; for all who hear the gospel. Thus Wisdom’s message is heard everywhere. Wisdom speaks in “all places in the city” (Prov. 1:20, 21; Prov. 8:2, 3;Prov. 9:3), that is, wherever men dwell (Prov. 8:4). The city, then, is not any particular earthly city, but the whole world as the dwelling place of mankind: it is the city of man. That this universal call is found in the Old Testament is all the more remarkable in that during the Old Testament, Wisdom spoke almost exclusively to the Jews.

Wisdom hath builded her house, she hath hewn out her seven pillars:

She hath killed her beasts; she hath mingled her wine; she hath also furnished her table.

She hath sent forth her maidens: she crieth upon the highest places of the city,

Whoso is simple, let him turn in hither: as for him that wanteth understanding, she saith to him,

Come, eat of my bread, and drink of the wine which I have mingled.

It is difficult to see that Wisdom’s house can be anything else than the church. There Christ dwells among us. There He furnishes His table and calls us to eat of His bread and drink of His wine.

These three speeches of Wisdom are the gospel. They cannot be anything else if it is Christ speaking in them, speaking to the sons of men and calling them from folly to wisdom. When we compare Wisdom’s speeches with what the word of God says about the gospel in II Timothy 3:15, 16, “And that from a child thou hast known the holy scriptures, which are able to make thee wise unto salvation through faith which is in Christ Jesus. All scripture is given by inspiration of God, and is profitable for doctrine, for reproof, for correction, for instruction in righteousness,” then we find that all the things that are part of the gospel are found in these speeches.

There is doctrine, reproof, correction, and instruction in righteousness in Wisdom’s speeches.

All the words of my mouth are in righteousness; there is nothing froward or perverse in them.

They are all plain to him that understandeth, and right to them that find knowledge.

Receive my instruction, and not silver; and knowledge rather than choice gold.

Not only can a comparison be made between such passages, but also Proverbs 1:24 is as much as quoted in Romans 10:21 with reference to the gospel: “Because I have called, and ye refused; I have stretched out my hand, and no man regarded.”

Wisdom’s speeches, therefore, have three parts, each of them representing an aspect of the gospel. In the first speech folly is reproved, men are called from their foolish ways and threatened with dire consequences for their failure to turn. This is especially the gospel call to repentance, or the negative part of the gospel call, though the whole of the gospel is there. Thus we find in the first speech a warning against foolishness (v. 22), a call to conversion (v. 23), a promise of the Spirit (v. 23), a threat of judgment (vv. 24-32), and a promise of peace and safety (v. 33) to those who hear and heed. This speech can very nicely be compared with Matthew 13:14-15, Acts 28:26-27, and II Corinthians 2:15-16.

In the third speech, which includes all of chapter 9, Wisdom promises blessing, and the emphasis is on the promise of the gospel. What Wisdom says can very nicely be compared to Isaiah 55:1, 2, Matthew 22:1-4, andRevelation 19:6-10, where the blessings of the gospel are promised in similar terms under the figure of a great feast.

This chapter also includes a conclusion to the comparison found in chapters 1-7 between the wise woman and the foolish woman, advice from father to son concerning both women, and an introduction to the proverbs found in chapters 10-29, including some of the most common and most important proverbs in the book, proverbs that express the fundamentals of true wisdom (note especially the five proverbs in Prov. 9:7-12). Chapter 9 also serves as transition to the rest of the book, therefore, but the main things are the spiritual blessings promised in the gospel under the figure of a place in Wisdom’s house and at His table to those who hear and obey Wisdom’s call through the work of the Spirit (Prov. 1:23). Learning from the book of Proverbs, therefore, is a matter of hearing and obeying the call of Christ in the gospel and of learning from Him who is the fount of all wisdom, the living and abiding Word of God. As He says in Prov. 8:35, 36: “For whoso findeth me findeth life, and shall obtain favour of the Lord. But he that sinneth against me wrongeth his own soul: all they that hate me love death.” 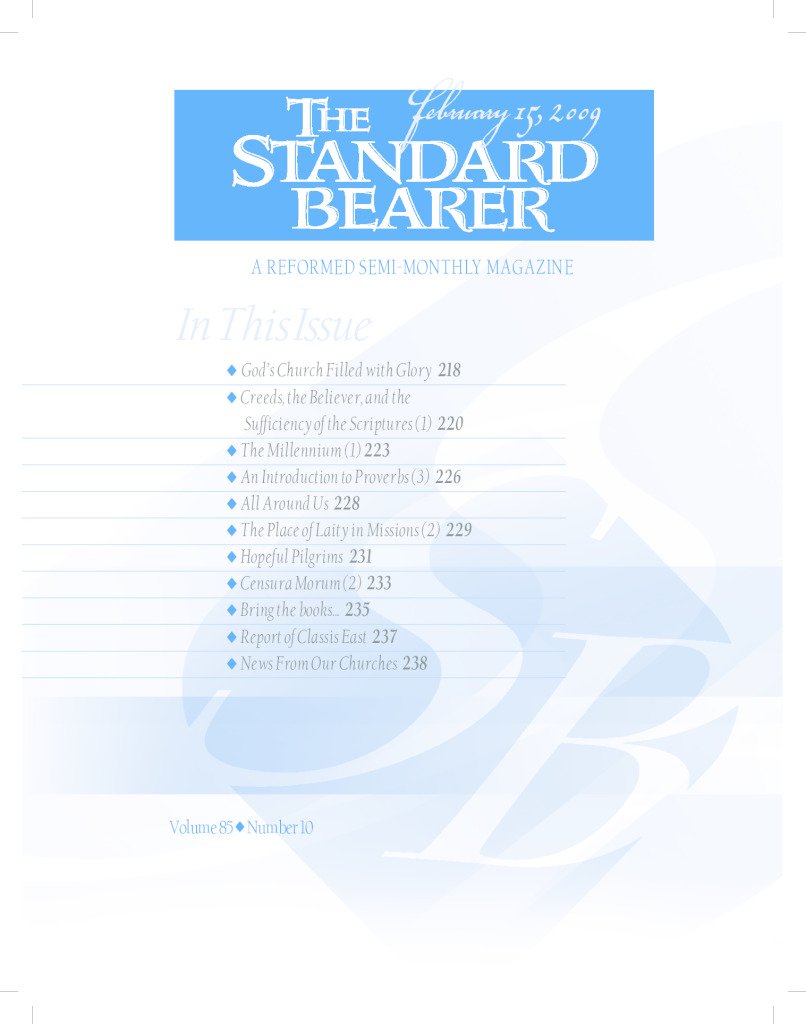