The evening of the Dedication Program for our new seminary building will be one long remembered by this writer — and undoubtedly by all who were present. It will go down in the annals of our history as one of the high points, one of those occasions when we reach the exhilarating atmosphere of the mountaintops of faith.

The faculty’s letter of appreciation, found elsewhere in this issue, was written before that evening of February 15. But even if it had been written afterward, sufficient descriptive adjectives could not be found to describe the God-centered note that was heard throughout the entire program, the outpouring of love and devotion to the cause of our Reformed faith that seemed to hang in the very atmosphere in First Church’s auditorium, the joyous exultation and thanksgiving which made the rafters ring from the songs of that tremendous audience. Not since my student days have I been nervous when I had to ascend a speaker’s platform; but when the duty fell to me to close the program, I was afraid I would not be able to speak. I had a great big lump in my throat — not from sadness, but from overwhelming joy and gratitude! It was one of those occasions when the impact of “What hath God wrought!” simply overwhelms a person!

Indeed, it was an evening to remember!

But why was it such a memorable occasion?

After the first excitement of the evening had worn off, I began to take inventory and to try to account for that spontaneous feeling of exhilaration which seemed to overwhelm so many of us who were present at the program.

Was it the fact that this evening represented in a formal sense the climax of all our denominational efforts to obtain new and suitable facilities for our Theological School? Was it the feeling of achievement, of attainment? Achievement and attainment for the building committee, the Theological School Committee, the faculty, the churches, our people? Undoubtedly there was this element. And in addition to this, there was the feeling of attainment with respect to our seminary itself. At long last, after some forty-nine years, our Theological School had gotten out of the basement of First Church, had emerged from quarters which were always intended to be temporary but which had tended to become almost permanent. Our seminary has its own place, a place to which we can point and say, “There is our Protestant Reformed Theological School!” Undoubtedly there was this element, too.

But there was more than these elements, I think, which served to produce the air of excitement that seemed to pervade the evening.

It seems to me that it was intrinsically an historic occasion. Historic it was, not only in the sense that it represented a climax, a high point, in our history as Protestant Reformed Churches. Historic it was not only in the sense that it was one of those occasions which one witnesses, perhaps, once in a lifetime or once in a generation. But it was an historic occasion in the deepest sense in that the significance of the history of our forty-nine years of existence as Protestant Reformed Churches all seemed to be concentrated, condensed, into that one evening. The hopes, the fears, the struggles, the labors, the trials and tribulations and tears — yes, all these! But more than all these, the fact that the Lord our God has preserved us as churches, has kept us faithful to the truth of His Word and of our Reformed Confessions, has given strength for the battle, encouragement at times of discouragement, has raised up men, servants, whenever needed, has given to us a singular place as churches, as witnesses of the truth of His sovereign grace and His everlasting covenant of friendship, and that, too, in an era when all around us is apostasy and decadence — all of this seemed to charge the very atmosphere on that memorable evening. It was present in the ringing notes of Prof. Decker’s dedicatory address, “That All The Earth May Know That Jehovah Is God.” It was present in the Liturgy of Dedication. It was present in the Psalms of praise and thanksgiving which were raised to Almighty God, the God of our fathers. Yes, it was represented even in the personnel of the evening’s program: did you not recognize the fact, the glorious fact, that it was the second and third generation of our Protestant Reformed Churches who led us in the program, and that they stood faithful to the same Reformed faith to which our fathers were dedicated?

Yes, there was much history concentrated in that evening, the history of the faithfulness and preserving grace of our covenant God! And now? Let us go on! Let us go on with renewed zeal and courage! Let us go on, dedicated anew to the preservation, the development, and the proclamation of the same glorious truths of God’s sovereign predestination and everlasting covenant of friendship!

We hope to pass on to our outlying churches and to our people who could not be present something of the excitement of that evening of dedication. Professor Decker’s address will appear in printed form in the near future in our Standard Bearer. Besides, the program of the evening was recorded. And we would like to prepare a program, tape-recorded, for our churches, and also include with the program a pictorial account of the seminary building project. You will be hearing of this in the near future. 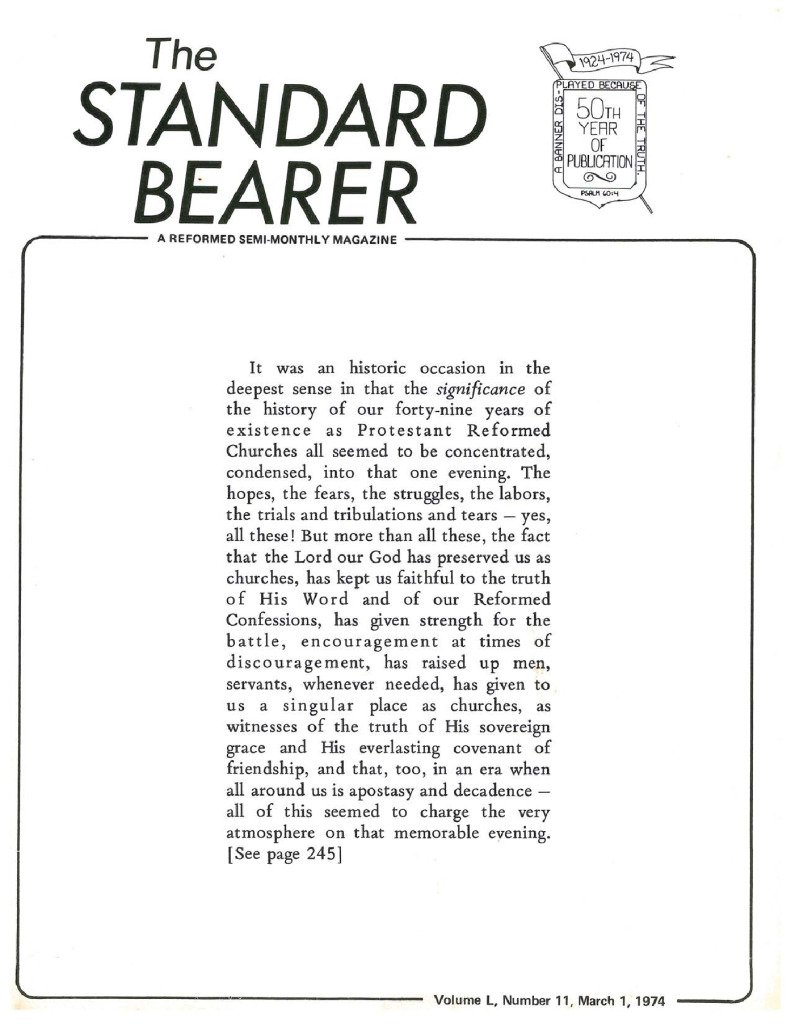