An Exclusive Right to Missions

An Exclusive Right to Missions

We also found in the last article that many organizations that are labeled parachurch ought not to be condemned as wrong. There are many organizations that perform a legitimate and worthwhile service on behalf of God’s people in this world without infringing on the rights of the church. Parachurch groups become wrong only when they involve themselves in work that belongs to the church institute. Christ has given the right exclusively to the church institute to preach the gospel, administer the sacraments, and exercise oversight and discipline over the spiritual lives of her members. When parachurch groups freely take on any of these given tasks, they are usurping what Christ has given to the church alone.

This is why at the conclusion of our last article we condemned those parachurch organizations that involve themselves in mission work. The objections we raised at the end of that article were only in summary form however. We were not able to expand on them. That is our intention in this article. Yet, we do not intend merely to critique parachurch missions. We hope to develop a proper, biblical understanding of the doctrine of the church in this connection. In that way we as believers can bind together our desire to do missions and our love for the instituted church of which we are members.

The body of Christ and the church institute

The church as the elect body of Christ gathered from all ages and all nations is essentially the same as the church as instituted by Christ. Though we must distinguish between the two for a correct understanding of Scripture, there is no essential difference between them. It is not as if God calls His universal Church (with a capital C) out of this world, but then leaves it up to man to decide what type of institutional structure that church will take. What type of institution man feels is more effective than another in preaching and teaching the Word is beside the point. Scripture teaches that “the heart of man is deceitful above all things, and desperately wicked” (Jer. 17:9). Because of this sinfulness of man, God would never allow man, even redeemed man, to decide what is the proper institution for the divine spread of the gospel.

It is to the church institute that Christ, the Head of the church, entrusts the care and protection of His Word (I Tim. 3:15), and the calling to preach the Word (Rom. 10:13-15; Matt. 28:19). God does not give men the freedom to form man-made organizations or institutions to preach the Word. The task of preaching, and therefore the task of missions, belongs to the divinely-ordained institution of the church. The parachurch is not God’s instrument for the task of missions. The church institute in her offices is the means God has chosen to use to preach the gospel to all nations.

Another way that parachurch advocates attempt to justify parachurch missions is by confusing the office of all believers with that of the special offices Christ has ordained in the church institute. The parachurch recognizes the office of those called to preach the gospel. But it also makes the claim that individual believers, in fellowship with other believers, have personal responsibility to obey God’s command to spread the gospel. Members of a church institute, therefore, are not restrained by Scripture from forming other associations for the purpose of preaching the gospel to others.

In connection with this idea is also the error of “lay preaching.” Since ordained preachers are busy within the church institute itself, parachurch organizations are quick to send out a lay person (male or female) to the mission field to do the work of preaching the gospel. Why not? Every believer possesses the office of prophet, priest, and king. Every believer as a prophet is called by God to evangelize. Every believer is called to confess God’s name in this world. We read concerning believers in the early church in Acts 8:4, “They that were scattered abroad went everywhere preaching the word.” On the basis of such reasoning, lay members of the church are utilized in this capacity by the parachurch.

This reasoning of the parachurch advocate is contrary to what the Scriptures teach us of the offices in the church institute in relationship to the office of all believers. I do not wish to re peat in this article what already has been written on this subject (cf. “Missions: the Work of the Church,” SB April 1, 2008, p. 297). But we must have a clear understanding regarding offices in the church institute.

The Bible in various places uses the term “witness” to describe this activity of the believer. This witness of God’s people is (ought to be) in harmony with the preaching. It draws people to the preaching of the church, but it is not on a par with, neither may it replace, the official proclamation of God’s Word by the church. The official preaching of the Word by the mouth of Christ’s ambassadors is the means of grace that God uses to work and confirm faith in the hearts of believers (Heidelberg Catechism, Lord’s Day 25, Question and Answer 65). Certainly, God can use our individual witness to bring one to a knowledge of the truth, but God does not intend such a witness to take the place of the preaching, or to be used by individual believers as a replacement for the work Christ has commissioned His church to do.

In the second place, Christ commands the church institute to go into all the world and preach the gospel to all creatures. This command is not given to the individual believer. The church institute is called to send out its ambassadors into this world in order to bring men to faith and repentance by the preaching of the gospel. The individual believer is called by God to be a witness in the particular calling and place God has given him in his family, community, workplace, and church. God does not call the members of His church to be “quasi-missionaries.” It is not the duty of every believer to “go out into all the world and be a witness to every creature.” (We are going to address this more in subsequent articles.) Nowhere does the Bible demand this of believers. Christ has ordained His instituted church by means of her offices to do this.

The parachurch movement and the proliferation of doctrinal error

Because parachurch organizations arrogantly ignore the role and rule of the instituted church in the preaching of the gospel, they have become a law unto themselves. The result is that they become a seedbed for doctrinal error. How often self-proclaimed evangelists have led many astray from the Scriptures. How often televangelists, family-radio teachers, and evangelists who hold huge rallies in football stadiums, or such like are heard sugar-coating the gospel with the sprinkles of false doctrine. They are able to do this because these men (and women) are answerable to no one. They place themselves outside of the rule of elders and therefore the discipline of the church. They are free to say what they want to say. The parachurch organization to which a televangelist belongs may split from him because of disagreement, but yet he is free to continue teaching his error.

It is for this reason that Christ has given the task of preaching the gospel to His church. The church through her elders is ordained to guard the truth of God’s Word. When a missionary teaches error, then he must be disciplined by the church, not allowed to continue in his error. To the instituted church Christ commands: “A man that is an heretic after the first and second admonition reject; knowing that he that is such is subverted, and sinneth, being condemned of himself” (Tit. 3:10, 11). When an organization other than the church institute takes on the work of missions on its own, it is a simple matter to escape the discipline of the church.

I know there are some complaints raised in our own churches concerning whether the churches go about the work of missions using the right methods. I have heard some of the criticisms. It is always good for us critically to analyze our mission work, so long as that criticism is constructive. But we may never as members decide our own way of doing missions. Never may we set up an organization to do the work of missions apart from the church institute. Even evangelism work in the local church must always be subject to the rule of the elders. This is biblical. This is God-glorifying. These labors God will bless. 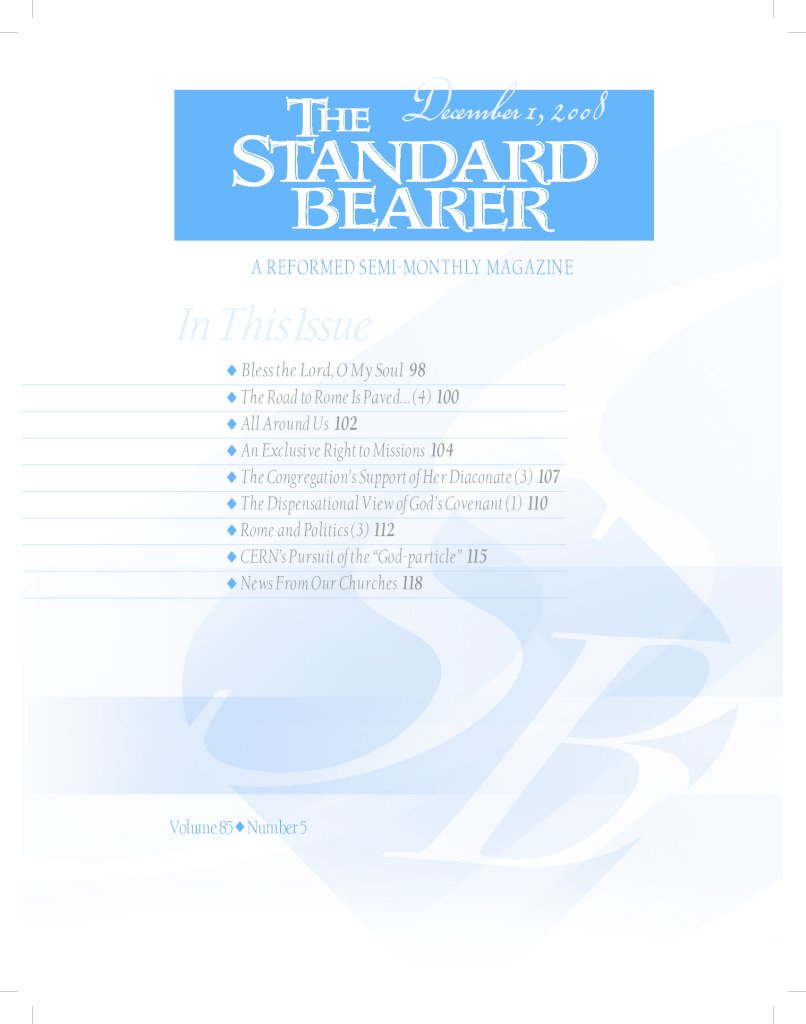