An exciting venture in the Philippines: A PRCP seminary

An exciting venture in the Philippines: A PRCP seminary

Earlier this year my wife and I enjoyed an extended furlough in the USA. In the course of visiting our churches, giving presentations at our schools, and discussing with many of you our labors in the Philippines, I was asked numerous questions (and good ones, I might add) about the plans for and work toward the start of a seminary in the Philippines. These questions indicated, first of all, a lively interest in and support for this significant development in the Protestant Reformed Churches in the Philippines (PRCP). It is indeed a large undertaking for this small denomination. But they and we are excited about it and thankful for the Lord’s blessing which enables such a work to begin. However, the many questions that were asked also indicated that many of you are wondering about the details of the seminary. The hope is that this article will help answer many of those questions.

When will the seminary begin?

Seminary classes began already on Tuesday, August 13. In anticipation of that significant day in the history of the PRCP, the denomination’s Theological School Committee sent a special request to each of the four churches asking that “the Consistories of the PRCP hold one worship service on August 11, 2019 dedicated to the beginning of the seminary school and entrusting our school to the blessing and care of our Sovereign God, and asking our pastors to preach texts related to the ministry of the Word and seminary instruction.” The goal of providing seminary instruction to Filipinos in the Philippines is something that has been in the works for many years. Both the PRCP and we as missionaries are convinced it is best to train the men here in the Philippines itself, so that the students can remain in their home country, their own culture, their home churches, with their families, etc. We are thankful the Lord has now made it a reality.

How many students are there?

We have one student enrolled in the first year of seminary classes (the 2019-2020 school year). We also anticipate more students being ready for seminary in our second year of operation (the 2020-2021 school year). And there are other young men in high school or in college who could be students in the future. We are thankful for God’s provision of all these young men.

Does the PRCP need so many ministers? That is, will there be places for each of these men to labor when, the Lord willing, they graduate?

Yes, for the PRCP is in urgent need of men for the gospel ministry. Currently, the denomination has four congregations (Berean PRC, the PRC in Bulacan, Maranatha PRC, and Provident PRC) plus a mission field (the Protestant Reformed Fellowship in Albuera, Leyte). That’s five pastors that are needed. At this time the denomination has only three pastors, and one of them is already in his mid-70s. Thus, there are currently two vacancies, and there could be a third in the near future. In addition to that, the individual churches of the PRCP have a significant amount of outreach work, and any of these contacts could develop into a place of labor for a PRCP missionary or pastor. What is true in the PRCA is also true in the PRCP: The harvest is plenteous, and the laborers are few.

Do the PRCP students need to fulfill certain pre-seminary requirements?

Already back in 2016 the PRCP Classis adopted a pre­seminary program. That program of study spells out that prospective students need to attain a college degree (a BA or BS), and that they must include certain courses in that degree. One thing that they must include is two years of Advanced English. The latter is necessary not only because the instruction (for now) will be given in English, but also because most Reformed literature is available today only in the English language.

Where will the seminary be located?

The PRCP Classis decided to use, for now, the church building of Provident PRC in Marikina. This building should serve us well, since it has a number of rooms, whiteboards, projector screens, tables and chairs, etc. The building is also easily accessible by public transportation. And if they so desire, the students should be able to find reasonably priced housing not too far from Provident. For ourselves, it takes us about 45 minutes to travel from our homes to Provident’s building. One more thing, and that is that the Classis also decided that in the future the Berean PRC’s building, when it has been prepared for this use, could become the new and more permanent location for the seminary.

Who will give the instruction? Will you missionar­ies be professors?

At the request of the PRCP’s Classis, the three PRC A missionaries will, for now, provide the instruction. This does not mean, however, that we will be professors.

None of us three has been called to be nor installed as a professor. Rather, our role as missionaries is to provide assistance to the PRCP in this significant work of training men for the gospel ministry. The fact that we are merely assisting the PRCP in this fits in with the fact that the seminary is not our seminary, nor a transplant of the PRCA seminary, but the seminary of the Protestant Reformed Churches in the Philippines. Thus, while the PRCP awaits the time when she will be able to call her own men to serve as professors, we have been asked to be the instructors. We count that a privilege. And it is our hope that the PRCP will be able one day to call and install her own men as seminary professors. That may be some years away, but that is our goal, and theirs.

What subjects will be taught in the seminary, and how many years will the seminary program be?

The PRCP Classis decided on a course of study that is very similar to what is provided in the PRCA’s theological school. One significant difference is that whereas Greek is a pre-seminary subject in the PRCA, it will be a seminary subject in the PRCP. The main reason for this is that the students have been unable to find a good Greek course in colleges or other seminaries here in the Philippines. The seminary program will also include a six-month internship. Because of the inclusion of Greek and also an internship in the seminary program, the whole seminary course will most likely be four and a half years.

Which subjects will each of you missionaries be teaching?

The subjects that have been assigned to us for the first two years of seminary instruction are as follows: Rev. R. Smit will teach Greek, Dogmatics, and New Testament Exegesis; Rev. D. Holstege will teach Hermeneutics and New Testament Isagogics; Rev. D. Kleyn will teach Church History, Homiletics, Old Testament Isagogics, and Hebrew. The reason why Rev. Holstege is not teaching as many courses is because currently he is also pastoring a vacant PRCP congregation (Provident PRC). Some of the above might change as we go along, depending on our relative workloads, the number of students in any given school year, our furloughs, and so on. But for now those are our assigned classes for the first two years.

Will others be able to sit in on the seminary class­es?

Many members of the churches have expressed a keen interest in attending the classes, even though they do not plan to pursue the ministry. And so the plan is to open up some of the classes to visitors. The courses that will be open to visitors in the first year are Dogmatics, Hermeneutics, and Church History. We trust this will benefit those members, and thus also the churches.

Has any thought been given to this seminary being used to train students for the ministry from other countries in Southeast Asia?

Yes, this idea has certainly been considered, not only by us here in the Philippines, but also by our Foreign Mission Committee. However, since we are at the beginning stages of the seminary, and because the need in the Philippines itself is so great, our focus for now will be on training Filipinos for the gospel ministry. But once the seminary is up and running, so to speak, then we should be able again to explore the idea of having students come here from other Southeast Asian countries. Some of our denomination’s contacts in other Asian countries have already expressed an interest in that. We trust that it will be possible in the future, the Lord willing.

Hopefully this provides a helpful overview of what the PRCP, with our help, has now undertaken for the training of men for the gospel ministry. The work be­fore the denomination and before us as missionaries is daunting. But we are confident of the Lord’s guidance and blessing. We thank our PRCA denomination for her faithful support of us as missionaries (and our fam­ilies) so that such a significant work can be undertak­en. And we covet your continued prayers. May God be pleased to bless and prosper this work so that the urgent need for Filipino pastors and missionaries can be met in the years to come. 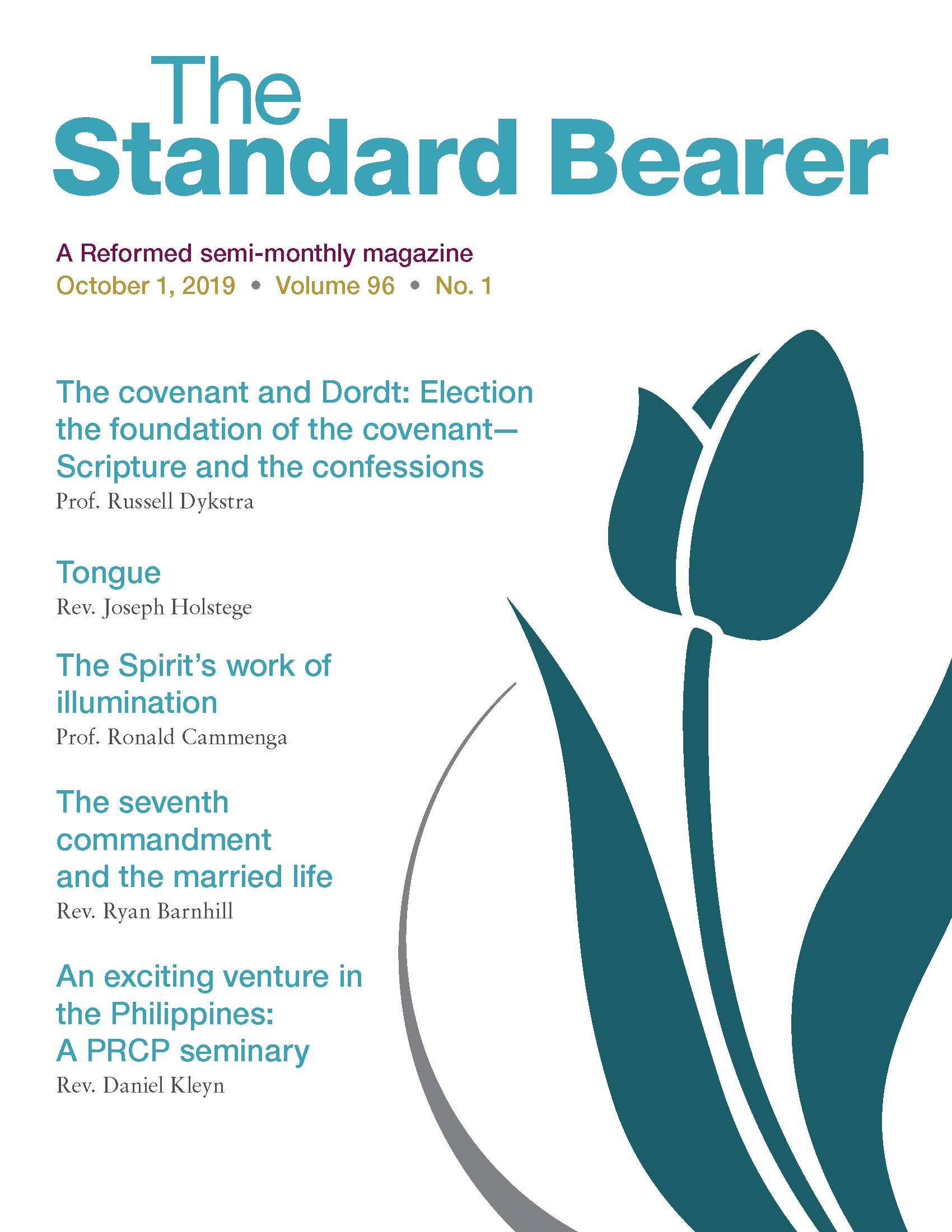