An Admonition to Love Not the World

John’s first epistle emphasizes the truth of the antithesis, the spiritual separation that exists between light and darkness, between Christ and Belial. God has created that spiritual separation by saving His children of light out of the world of darkness. The antithesis is rooted in the eternal counsel of God, in His sovereign decree of election and reprobation. Redeemed in the blood of Christ, regenerated by the power of the Holy Spirit, God’s people are called out of the world of darkness into His marvelous light. And He calls us to live antithetically in the midst of this world. So we are exhorted, “Love not the world!”

Never has this Word of God been needed more urgently! From a natural point of view, these are very exciting times to be alive! What a world in which to live! Technology advances by leaps and bounds. Opportunities abound for obtaining possessions and wealth. The pleasures and entertainments are multiplied. Oh, there are many challenges—but who would deny that it is an exciting time to be alive?

But, we must not be caught up in it all. We must realize that it is also an exceedingly dangerous time to be alive from a spiritual point of view. Not since Babel and its famous tower has the unbelieving world been so united against our God and the cause of Christ. Never before has so much of what calls herself church compromised the truth of God’s Word to such an extent that she is virtually indistinguishable from the world. Never before have so many Christians been so enamored with pleasures and treasures of the world. Let us heed this vital admonition!

The term “world” is used no less than six times in this passage. It is clear in Scripture that this word (literally “cosmos”) has various meanings. Basically, the term “world” looks at the universe from the viewpoint of its organic unity and harmony with man at its head. It can refer to the whole of God’s creation, such that we read of “the foundation of the world” (Eph. 1:4). “World” is used when speaking of the sum total of God’s elect as an organic whole, along with the creation that shall also be redeemed and restored in Christ; and so we read, “For God so loved the world…” (John 3:16). But the word is also used with respect to the fallen creation. In this sense “world” refers to all ungodly men as they dominate in creation and develop in sin through their use of God’s creation. Jesus says in John 17:9, “I pray for them: I pray not for the world.”

Obviously, it is in this last sense that the apostle John speaks in this passage. “World” here is the whole of reprobate, ungodly men together with all the earthly creation as they develop and use all things in the service of sin. It is the world whose harmony has as its principle the perfect agreement to rebel against God and trample His law. The beauty of this world is the carnal, sensual, perverted glamour of Hollywood. It is the world that exalts man and caters to his every whim. This is the world out of which Antichrist arises in the last days, as verse 18 states. \This is the world in the midst of which the church lives.

This wicked world is all around us! Think of the casinos, the night clubs, the dance halls, and the theaters. This world is in the corporate offices, on the factory floor, but also in the places of learning, the schools and universities, which in pride deny the sovereign Creator. It is in the political campaigns, the halls of justice, and the legislative chambers. This world is promoted by the media that thrives on the sensational and whatever titillates our senses. It is even in much of the modern-day church that extols a gospel of self-esteem and tolerance. This world is found in every sphere of life, yea, even in our own sinful natures, so that we cannot possibly avoid coming into contact with it.

But the idea is that the wicked who dominate in this world take all of these good creatures of God and use them in the service of sin. All the culture, government, science, technology, philosophy, economics, industry, education, music, and art are used in awful rebellion against God. The ungodly are dedicated to the overthrow of the living God and to the establishment of a kingdom of darkness in which sin rules supreme.

What then is our calling as God’s people toward this world? “Love not the world, neither the things that are in the world.” True love is a spiritual relationship that unites, that rejoices and finds pleasure in the perfectness of another. In the deepest sense, it is the love that proceeds from God to us and that through us returns to God. That love must not be directed toward the world!

This Word of God gives us an objective reason for this admonition: “For all that is in the world, the lust of the flesh, and the lust of the eyes, and the pride of life, is not of the Father, but is of the world” (v. 16). The word “lust”’ here is not used in the narrow sense of carnal sexual desires, but it refers to evil desire in the broad sense. Lust is evil desire for anything that is contrary to God’s will. Here these lusts are conceived of objectively, as something that is in the world and with which we come into contact, desires that are presented to us as objects to love.

These lusts are classified here. We read first of “the lust of the flesh.” This is the lust of the lower desires of man that burn with passion. The lusts of the flesh are gluttony, drunkenness, drug abuse, all manner of sexual immorality and such things. The world says, “Eat, drink, and be merry, for tomorrow we die.” Think of Eve as she was tempted by Satan in the Garden of Eden. We read in Genesis 3 that the woman saw that the tree was good for food. She lusted after it. Here sin reveals itself as “lust of the flesh”.

Finally, lust is the “pride of life.” This is the vain glory of life that seeks self. The world, by its scientific advancements, inventions, technology, scholarship, and so-called wisdom, thinks it is in control of all things and exalts itself as God. Once more think of Eve being tempted by Satan. We read that the woman saw that it was “a tree to be desired to make one wise.” Eve considered the tree from the viewpoint of the lie of the devil: “Ye shall be as gods, knowing good and evil.” This setting aside of the Word of God in preference for her own judgment is the “pride of life.”

All this is not of the Father, but is of the world. The Father is holy, just, and good. In God is no darkness at all. All this is of the world. All darkness, sin, and evil have their source in the world. There is no trace of goodness, no sign of any fruit of a “common grace” or “civil good.” All that is in the world is godless, not godly. If you seek it, you love the world. And let us not forget that we can so easily indulge in these lusts vicariously through our big-screen TVs, our smart phones, the Internet, and other media.

But there is also a subjective reason for this admonition: “If any man love the world, the love of the Father is not in him.” By grace, we have the love of God in our hearts. God lavished His love on us in Christ. In His love, we love Him and all that is of Him. Yet, that love is not perfect and complete in us. We have only a small beginning of true obedience. Our old man of sin is filled with the principle of the love of the world.

This love of the Father excludes the love of the world! Do you love the world? Is the world precious to you? Do you crave its wealth, its fame, its carnal culture, its pleasures, its immorality? We must fight against the principle of the love of the world with all our heart! It is either-or! “For what fellowship hath righteousness with unrighteousness? And what communion hath light with darkness?” (II Cor. 6:14). We are admonished to love not the world because of the absolute antithesis between sin and grace, between light and darkness, between Christ and Belial! The antithesis calls us to walk as pilgrims and strangers in the earth, seeking and loving all that is good, hating and fleeing all that is evil.

The Incentive What an incentive we are given to heed this admonition! “And the world passeth away, and the lust thereof.” This world is on the way to destruction! It is now in the very act of passing away. And the lusts of the world are also hastening to destruction. The lusts of the world and their glory soon fade away. All its glitz and glitter, all its fame and fortune, all its might and power, all its technology and genius, all its pleasures and treasures are but for a moment. How foolish to love something so temporary!

But there is a word of warning here. Ultimately, he who loves the world goes to destruction with it. Jehovah thunders in Isaiah 13:11, “And I will punish the world for their evil, and the wicked for their iniquity; and I will cause the arrogancy of the proud to cease, and will lay low the haughtiness of the terrible.” The lovers of this world will be left naked, wretched, doomed to the torments of hell. All who love the world will perish with the world!

In contrast, “but he that doeth the will of God abideth forever.” He who does God’s will belongs not to the world. He belongs to the work of God’s grace in the midst of the world. He was delivered from the world and its lusts through the saving work of Christ and His Spirit. He shall abide forever! A crown of glory awaits him—everlasting life in the kingdom of heaven.

Are you doing the will of God? Are you spiritually sensitive, recognizing the world and the things that are in the world? The love of the world is not far from us. We still contend with the lusts of the flesh and of the eyes and the pride of life. How easily we are overwhelmed with fleshly emotions! And it is all virtually at our fingertips—materialism, sports fanaticism, violence, pornography. Search your heart! “How shall we that are dead to sin live any longer therein?” (Rom. 6:2).

Be not deceived! The world is passing away and the lusts thereof. Love not the world! Desire to abide forever with your heavenly Father. “Wherefore, beloved, seeing that ye look for such things, be diligent that ye may be found of him in peace, without spot, and blameless” (II Pet. 3:14). 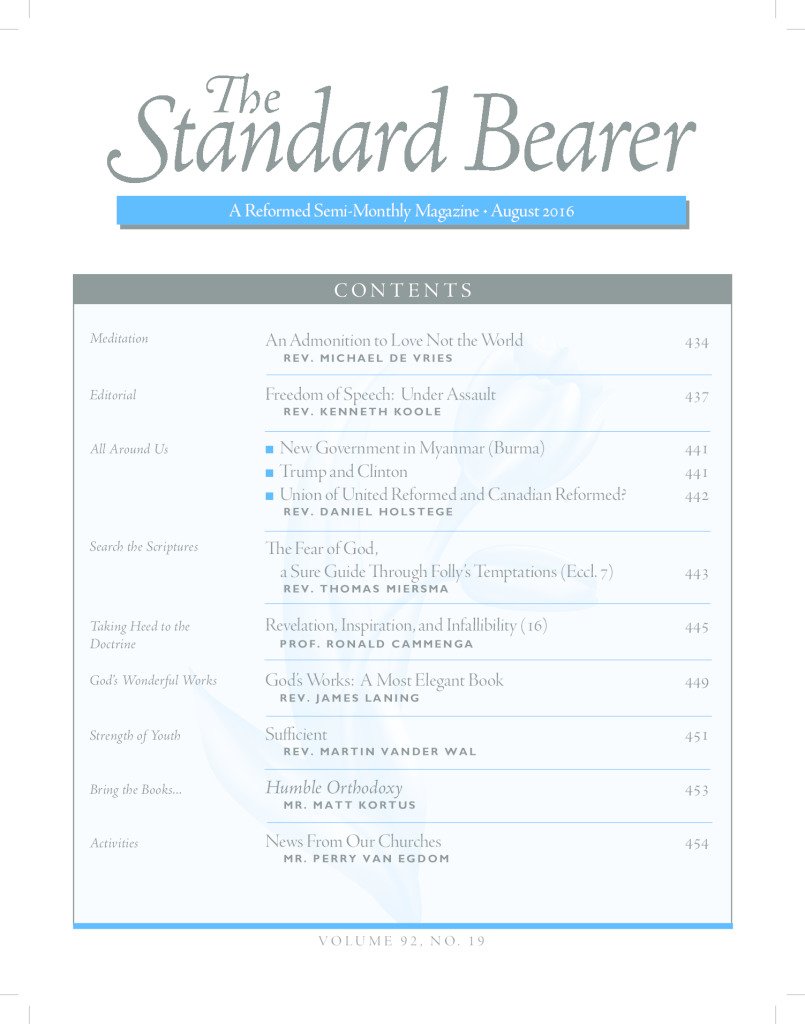