It happens here in our own city and in thousands of cities across the face of our land, but it struck us as potentially amusing and confusing while paging through an advertising paper when we were “out of town” recently.

Scattered through the paper, which did have on a separate page a church directory listing the church, her pastor’s name, location of the church and time of services, were also advertisements of the church itself, much as you would advertise a manufactured product, a college or university, a repair service or banking service. Paging through the paper from front cover to back page one got the impression that all these churches in the area were competing with each other for membership, the one seeking to draw away from the other, the one claiming to have something that the other lacked, and in some instances as though only it could possibly have this element to offer.

Many of the churches had mottos, slogans, proclamations, or whatever you wish to call them, which seemed to express some superiority over the others. In some instances churches—and please note the double plural—in the same denomination seemed to be seeking to impress the readers with the fact that they had not and do not go along with the corruptions to be found in their denomination. It would seem, however, as though all the churches in a given denomination ought to be able to use the same slogan and to identify themselves as being the denomination that holds to this truth or position.

In some instances the slogan or proclamation stressed the doctrinal purity of the congregation. This often was combined with a statement of loyalty to the confessions of the denomination. We have an instance here in our own area where the stress is the laid upon the fact that “Ours is the Friendly Church,” and congeniality among the members is presented as a point of appeal to draw into its circle from other churches, rather than purity of doctrine, faithfulness to the Word of God and insistence upon a walk of faith. Come to think of it, we cannot recall seeing any church advertisement anywhere that sought to draw and attract by stressing its faithful adherence to Christian discipline. Why? Would this earmark of the true church only frighten away? Conceivably a church that would advertise itself as standing for the principle that all its members are free to “do their thing” would grow and “prosper.” Which reminds us of another slogan used by a church in the area that “Ours is the fastest Growing Church in the Community.”

Surely the unchurched, the world, is amused by all this, and Satan chuckles as he sees the churches vying with each other, jockeying for the best position, rather than for the purest manifestation of the truth. And many serious-minded children of God are confused by it all. It seems to us, from the very wording of these slogans that they are directed not to the unchurched, (except in some rare instances) for they use words which the world cannot even understand, and phrases which only those who have a rather detailed knowledge of doctrine and of church history can appreciate. One gets the impression that it is exactly a case of striving to draw away from one group, or from one church, to add to its own membership. And the serious—minded Christian who, through no fault of his own, finds himself in a strange city over the Sabbath, is confused by all the claims and counterclaims. Likewise is the family that moves into the area and is looking for a church home.

Let it be stated in parentheses here that it is to be deplored that men will deliberately arrange to be in a city where they have no assurance that on this particular Sabbath they will find a place where they can receive the Bread of Life in the pure preaching of the Word. Tragic it is too that men will move with their families—those poor children!!—into new areas for a better job, advancement into the world, more social life and the like, without first determining that there is a church there where they can receive the Word of God, and where there will be men who are seriously interested in keeping them in the way of righteousness and in a walk of faith.

And what about the riot of names of the churches through the land! This, too, must be amusing to the world and confusing to the serious-minded believer. The one calls itself The Church of God, as though all the rest are not His church. Another comes along and feels the need, because of disagreement with this group, to add to it, and wants to be called The Church of God in Christ, or The Church of God of Prophecy, implying that the others reject Christ and the prophecies of Holy Writ, and are therefore not to be trusted. Then there are those words of true, orthodox, reorganized and even reformed, which all serve again to point out that these are superior to those who cannot use these words, or do not use them.

Now all these lines are not written as a condemnation of the practice of a church or group of churches making itself known in the midst of this wicked world. We are not branding as not being In His Fear all use of the means at our disposal for witnessing where the church of God may be found on the Sabbath, and where the pure preaching of the Word may be found in a church that is dedicated to strict Christian discipline. In fact, if ever it was necessary to let the confused and disturbed saints know where they can still hear God’s Word instead of man’s philosophies, where there still is the preaching from the infallible Word of God that insists that it is infallible, it is necessary today. And we surely do live in a day and age when many are confused. The foundations are shaken. The clamor is to restate the creeds, because they contain that which militates against the flesh and denies freedom—freedom, that is, to walk in sin.

The fifth column that comes neither from the right, nor from the left, makes no attack from the front or from the rear, but from within the very bosom of the church, by her own sons and daughters, her own pastors and professors of theology, has introduced so much of man’s philosophies that it needs to be stressed, by those who are faithful to the truth, unto those who miss the Word of God and hear the comfortless word of man, that here one may come and eat and drink of the Bread of Life and of the Water of Life.

And all this is so strange in a day when—exactly because of that fifth column—there is so much talk about the fact that it really makes no difference to what church you belong, as long as you belong to a church; when it is claimed that no church has all the truth and all have a part of it; and when there is such a concentrated effort today to unite all the churches under one powerful—but not doctrinally pure—super church.

Now, of course, where the advertisement is false, it certainly is not In His Fear. And in not a few instances this is the case. Loyalty to the Word of God and to the confessions of the denomination are claimed but not practiced. Sometimes this is done exactly to try to keep within the fold those who are rightfully disturbed by what is done in that fold. Then it is not in the spirit of competition to draw in others, but it serves to keep in that which threatens to leave for its very spiritual nourishment and life. And history will show that the heretic always strives to convince that he is loyal to the Word of God and the creeds of his denomination. Satan himself in the beginning posed as being interested in what God said. He asked Eve, “Yea, hath God said. . . .?” Cain did not say, “I will not sacrifice. None of this religion business for me!” He said, “I will do my thing!” And the Cains in the church sphere today are legion. They will decide for themselves how God ought to be worshipped, and that wherein God ought to be pleased. And since the day of the Reformation men have confused God’s speech and scattered into every conceivable direction. At the tower of Babel God confused man’s speech and scattered him to the four corners of the earth. But in an evil interpretation of the unchaining of the Scriptures by the great Reformation, men have corrupted God’s speech and scattered the church into factions and splinters too numerous to count. Men have felt free to interpret as they please. Men have dared to free themselves from the Scriptures, and to free a text here and there from its context and from the rest of Scripture and gone to some fantastic extremes.

The Roman Catholic Church is also amused by all this and claims to be the true Church exactly because it has not been divided and has through the ages continued as one united group of churches. It advertises itself also as such. Its membership must also be confused by all the claims and counterclaims of the Protestant churches. To the amusement of Satan, it only adds to the confused picture when the Romish church advertises its claim to being the only church. And again Satan chuckles when he hears all the answers given today to his question, “Yea, hath God said. . . .? Are you sure that you understand what He said?”

But against this Romish church where man’s word is substituted for God’s, and men are worshipped in place of God, where it is taught that salvation depends upon man’s works rather than Christ’s finished work on the cross, the churches that want God’s Word and find it to be the gospel’s good news, to hear that we are saved by grace and not. by works, should witness of this truth, not for the sake of numerical growth, not with the carnal satisfaction of having won a victory over another church (or group of men, actually), but for the glory and spiritual wellbeing of His children.

If this is behind church advertisements it is In His Fear. And then that church or group of churches must be willing also to suffer the ridicule and mockery, the scorn and contempt of the enemies of the truth.

Yea, that church, or group of churches, must realize that such witnessing will mark it as that which will receive the first blows, and is in the front line off the battle of faith to receive the most vicious attacks of the antichristian forces. They must expect to be the first ones to have their doors closed and their meetings broken up, their clergy cast into the dungeon and their officebearers fined and/or abused.

If we do not want to advertise that we stand for the truth today, we surely will advertise falsely in that day. But in this day of apostasy, when it is hard to find the pure preaching of the Word, and when Christian discipline is almost a museum piece, let those churches whotruly hold fast to the truth let their light shine before men, that the serious-mined believer may find the Word of God and with it taste and see that God is good. Let them feed the hungry, give water to the thirsty and continue to say before the wicked world, “This God is our God. Come with your mark of the beast. Come with your persecutions and vehement hate against us because we represent God and His Christ. We will not silence our voice. For we are not seeking numbers or earthly power but the glory of God.” 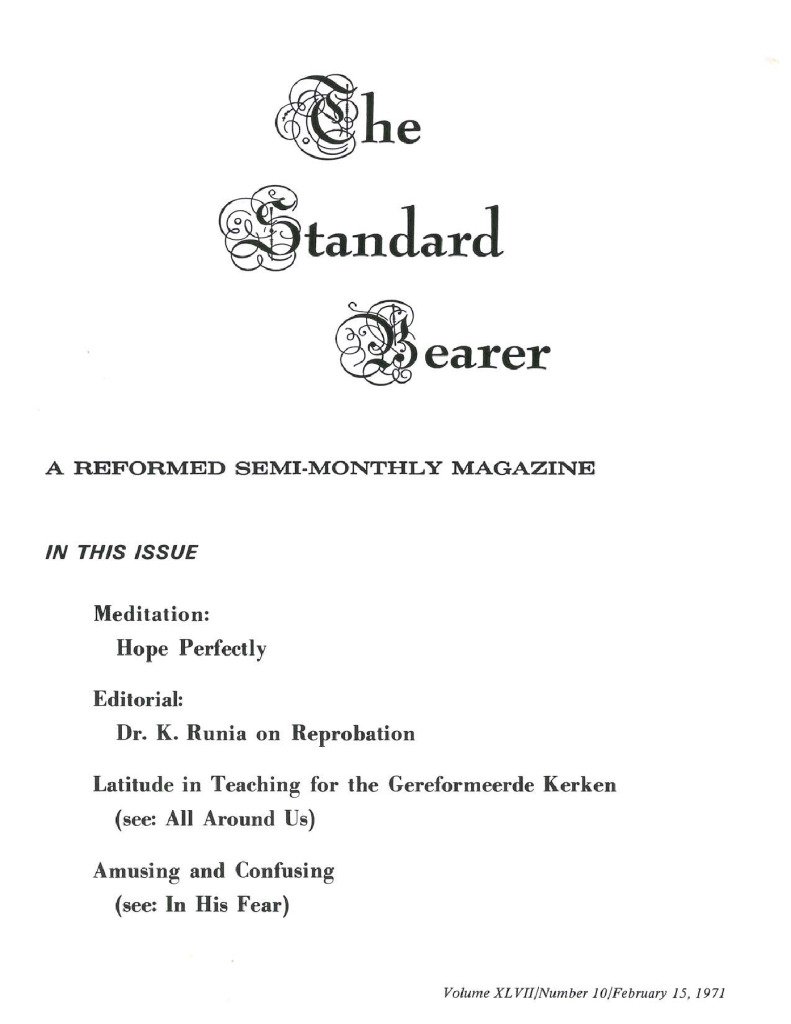