Perhaps the main thrust of Daane’s article is in the last column. There, so to speak, the cat comes out of the bag. After all, he is disturbed—as so often before—by Hoeksema’s theology. And he wants somehow to blame that hated theology of Hoeksema for the ills of Christian Reformed preaching.

One can only shake his head in amazement at such strange meanderings of Daane’s thinking.

I will quote Daane in full at this point, so that the reader may judge for himself that I do Daane no injustice. His faulty reasoning is so transparent that anyone can see through it. He writes:

Hoeksema took issue with W. Heyns, a professor at Calvin Seminary, because “for him [Heyns] the salvation of the Covenant-members is the one and only thing in God’s Covenant. The Covenant is really a promise of salvation.” Heyns, said Hoeksema, “views God’s Covenant purely soteriologically,” that is, Heyns failed to define the Covenant in terms of damnation as well as salvation.

Here lies the clue to the kind of theologizing that muted the sound of Covenant, Grace and Election in our pulpits. When the doctrine of the Covenant is put through the grid of a theology that rejects the Covenant as “purely soteriological” and defines it in terms of damnation as well as salvation, what the theologians bequeath to the man of the pulpit is something he does not know how to preach. Inheriting a bramble of confusion which he cannot preach and usually dares not challenge, the man of the pulpit simply retreats into silence.

Now I will pass by the fact that Daane furnishes a very poor description of preaching here.

I will also pass by the fact that at best Daane gives only a partial description of Hoeksema’s criticism of Heyns. I will only remind him that Hoeksema’s main criticism of Heyns was that he introduced Arminianism into the covenant, though it is certainly true that Hoeksema criticized many theologians for a soteriological view of the covenant and was himself thoroughly theological and theocentric in his covenant theology.

But let us follow Daane’s reasonings, based upon his own premise.

Proposition 3: Hoeksema’s covenant view and his criticism of Heyns never found any appreciable acceptance among the Christian Reformed clergy.

Proposition 4: Yet the truth of the covenant is largely muted in Christian Reformed pulpits today.

Proposition 5: It is Hoeksema’s kind of theologizing that must be blamed for the fact that the sound of Covenant, Grace, and Election is muted in Christian Reformed pulpits.

Daane himself, being a rational being, cannot believe this!

And now let us do the same thing from the point of view of Heyns’s theologizing, as follows:

Proposition 2: Prof. Heyns taught such a purely soteriological view of the Covenant. He refused to define the covenant in terms of damnation as well as salvation.

Proposition 3: Prof. Heyns bequeathed his view to the man of the pulpit in his writings and in his class-room instruction at Calvin College and Seminary for many years. He was in a position to influence many future Christian Reformed preachers. He was even a teacher who is reported to have brooked no opposition in his classes.

Proposition 4: For the most part Prof. Heyns’s views were accepted uncritically. Herman Hoeksema was one of the few who disagreed with Heyns; but Herman Hoeksema did not fully develop his own covenant theology until he was outside of the Christian Reformed Church.

Proposition 5: The sound of the Covenant is largely muted in Christian Reformed pulpits today.

Proposition 6: Daane’s conclusion: This is the fault not of Heyns, but of Hoeksema’s theologizing.

My conclusion: This can only be largely the fault of the man who largely influenced Christian Reformed preaching, namely, Heyns. 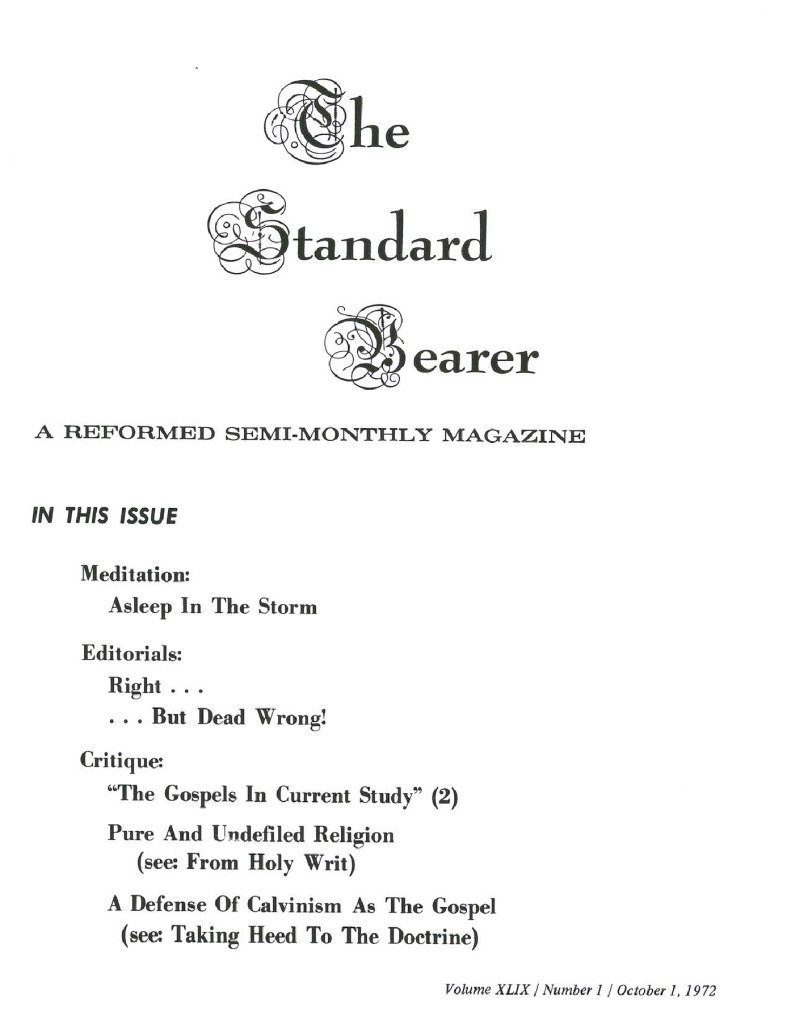