All Things Decently and in Order

All Things Decently and in Order

For God is not the author of confusion, but of peace… Let all things be done decently and in order.

The church of Corinth had been especially blessed with the special gifts of the Spirit. These gifts included speaking in tongues, interpretation of tongues, prophecies, and revelations.

However, there was a problem in Corinth with all these gifts. Those endowed with these gifts tended to compete with each other at the public worship so that there was confusion and chaos.

In this fourteenth chapter of his letter to Corinth the apostle Paul gives instruction concerning the orderly use of these gifts, especially the gifts of tongues and prophecy.

Concerning tongues, let no more than two, or possibly three, speak in a service. Let them speak only when one is present with the gift of interpretation, so that the whole church may be edified. If there is none to interpret, let the one with the gift of tongues speak to himself and to God but not in the public worship.

Concerning prophecy, let two or three prophesy. Let the rest of the congregation judge and discern its truth. Should anything be revealed to one who sits (i.e., an elder or minister), let the one who began to prophesy first hold his peace and yield. Let those who prophesy do so one by one.

In all this let the women keep silence. It is not permitted for women to speak in the public worship of the church. If women will learn anything, let them ask their husbands at home.

It was necessary that the chaos that prevailed in the worship of Corinth cease and that order be restored. For God is not the author of confusion, but of peace.

Let all things, therefore, be done decently and in order.

There was confusion in other areas of the life of the Corinthian church as well. The congregation was badly divided by a party spirit. An incestuous relation continued unchecked in the church. There were lawsuits among the members of the church. The Lords Supper had degenerated into a feast from which some were wrongfully excluded and at which others became drunk. There was also strife and confusion occasioned by questions of marriage and eating meats offered to idols.

These also are the concern of Paul.

Let all things, therefore, be done decently and in order.

This is a general truth that has broader application than just the public worship or life of the church.

God is the author of peace because He is the God of peace within Himself. God is triune: three persons subsisting in the one divine Being. Among these three (Father, Son, and Holy Spirit) there is no confusion, discord, or disorder. There is only perfect love manifesting itself in complete harmony, unity, and peace.

Hence, neither is God the author of confusion or discord among men. He is rather the source of peace.

This is clearly seen in the original creation of man. God created man in His own image. Reflected in man’s very being were the virtues and perfections of God. By reason of this creation there existed a most beautiful love between God and man. God was drawn to man, who bore His likeness. Man adored his God and’ served Him in love according to the laws that God set over him to order his life. There was not confusion, discord, or chaos but peace.

This same peace existed in the beginning among mankind. God originally made two, Adam and Eve, from whom developed the whole human race. Since both Adam and Eve knew the love and peace of God as God’s image bearers, they too were drawn together with cords of perfect love. In their life together there was no strife or conflict but perfect peace, as they demonstrated their love to each other according to the law which God had ordained-for their life together.

This peace extended even to the whole earthly creation over which God placed man as king. In that original creation all the creatures of God, great and small, organic and inorganic, were designed to exist in perfect harmony according to certain “laws of nature” which God established. Under the kingship of man, peace prevailed on the earth.

But then sin entered the world. By the instigation of the devil, Adam and Eve rebelled against God. And the consequences of this original sin have been devastating.

Not only did our first parents, Adam and Eve, lose their original righteousness, so did the whole human race that develops from them. Losing the image of God, the human race has become evil, corrupt, desperately wicked, inclined to hate God and each other.

This, in turn, has led to strife, conflict, and disorder.

There is strife between God and man, as one generation after another demonstrates its contempt of the living God by trampling under foot His commandments. This conflict can only result in the destruction of man in hell.

There is also strife within the human race itself. The evil hatred of heart that has taken hold of fallen man shows itself in jealousy, anger, strife, and conflict on every level of human life: in marriage, in the home, in the state, in business, among the races, among the nations.

The confusion of sin has even fallen upon the creation as a whole. For in consequence of man’s original sin, the curse of God came upon the whole universe, disrupting the original peace that prevailed.

From this confusion of sin God has saved His church in Jesus Christ.

In the blood of Jesus Christ God freely forgives His people all their sins. But He also changes them. He delivers them from the power of sin that has taken hold of them. He restores them to His own image in which they were originally created but which they lost in the fall. He makes them righteous and holy as He is. This glorious transformation of heart and soul is only begun in this life. It will be perfected in glory.

The result of this great salvation is that the redeemed of God love the Lord their God. They also love one another for God’s sake. They even love the neighbor who continues on in sin without Christ. This love manifests itself in a life of obedience to God and His commandments, an obedience which brings peace – peace with God, peace among the saints. The redeemed of God even seek to bring this glorious peace to the warmongers of this world, who know not the Lord nor His salvation.

In this section of his letter to the Corinthian church the apostle Paul applies this truth specifically to the life and worship of the church.

Let all things in the church, therefore, be done decently and in order.

For the peace of the church God has ordained certain principles which are to govern the life and worship of the church. These principles are found in the New Testament Scriptures, revealed either by the example of the apostolic church or by direct command of God.

Thus, for example, God has ordained that there shall be three offices in the church (minister, elder, and deacon) through which Christ speaks, rules, and provides for the poor in every congregation. There shall be public worship on the Lords Day, in which the preaching is primary but which also includes the sacraments, prayers, singing, and the giving of alms. There shall be discipline exercised in the church, involving all the members but under the supervision of the office of elder.

When these and other principles laid down by God for the life and worship of the church are neglected, there is confusion, discord, chaos. This is what had happened in the Corinthian church.

When by the grace of God these principles are followed there is decency, good order, and peace.

This is the concern of the apostle Paul.

Let all things be done decently and in order.

For God is not the author of confusion, but of peace.

The principles God has ordained for the good order and peace of the church are reflected in the great church order of Dordrecht, to which this issue of the Standard Bearer is devoted.

This church order has been a tremendous blessing to the Reformed churches down through the ages. For it has been the tool of God to provide decency, good order, and peace for the church.

And this is above all precious. 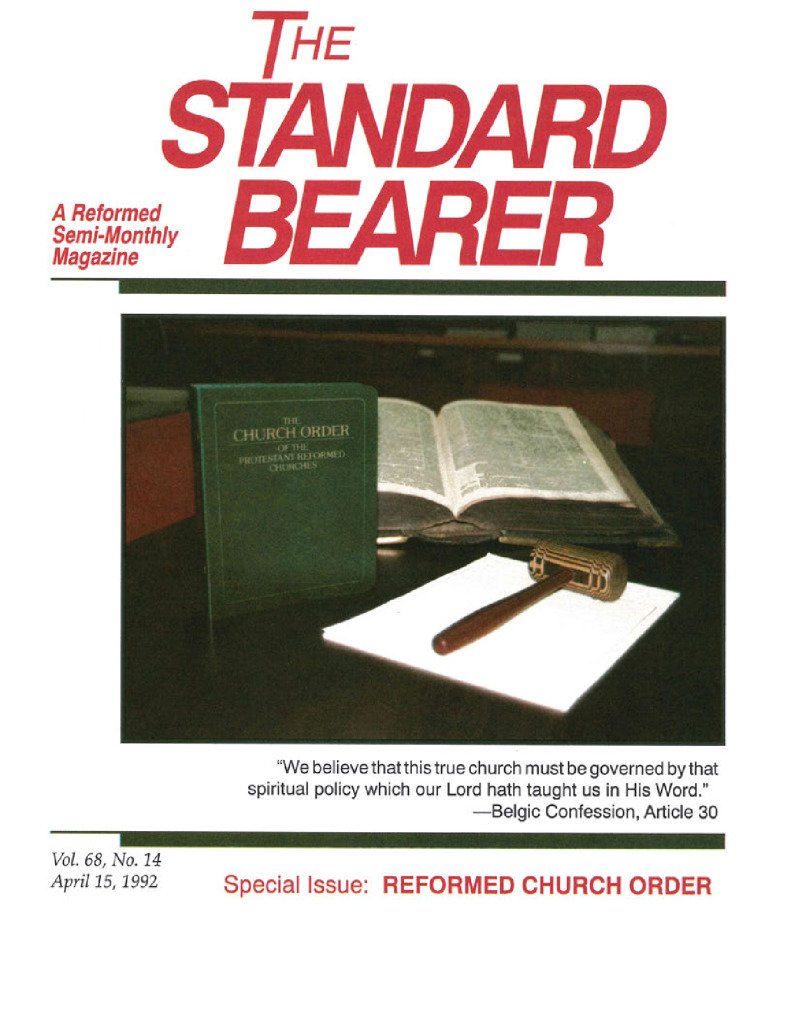