A few issues ago, I commented in this column on a news, item concerning the fact that Mrs. M. Rienstra, a student at Calvin Seminary, was available for preaching during the summer months. The news item said that additional information was available from Rev. Geleynse, who was in charge of student preaching at the Seminary. I concluded that this indicated that the preaching of Mrs. Rienstra had Seminary approval. Apparently this was not true.

Rev. W. Haverkamp has commented on this matter in De Wachter, and I spoke with Rev. Haverkamp personally during intermission at Calvin’s annual rendition of “The Messiah” in the Civic Auditorium.

He told me in our personal conversation and wrote in De Wachter that there was misunderstanding on this point. He conveyed the following information. Women seminary students must take part in summer field work as well as other students, but this is with the exception of “speaking an edifying word.” Mrs. Rienstra made herself available for preaching on her own without the knowledge and consent of the Seminary. In fact, the Seminary does not make it a policy to give consent to preach. Further, Rev. Geleynse had, on his own and without the knowledge of the Seminary, offered information concerning Mrs. Rienstra to those who were interested in her preaching, and this action was disapproved of by the Curatorium.

Hence, Rev. Haverkamp assures his readers that this is not a first step in the ordination of women ministers in the Christian Reformed Church.

We are glad to correct this and, set the record straight on the matter. However, whether this is the end of the matter remains to be seen. In the Report of the Board of Trustees of Calvin Seminary, Synod was asked “to charge its study committee on Women in Ecclesiastical Office to give specific consideration to the distinction between licensure and ordination, and exhorting and preaching, as this distinction may bear on the place of women in the seminary’s field education.” (Acts of Synod, pp. 28, 29.) This recommendation was adopted by Synod. What this committee will finally recommend and what the Synod will finally do remains to be seen.

The reason for this is not necessarily a growing interest in religious education; it is more an evidence of disillusionment with existing public schools. There are many reasons why people are no longer satisfied with public schools. Some of these reasons are the following. Most public schools are very careful in administering any type of corporal punishment, and many schools do not use such punishment at all. The courts of the land have sharply curtailed actions which once were taken for granted in the public school systems. Traditional public prayers and Bible reading have been banned. Students are not required to participate in the pledge of allegiance to the flag. Schools are limited in their right to suspend or expel students who have flagrantly disobeyed the rules of the school or made themselves obnoxious by their conduct. The control of the administration is sharply curtailed in matters of student dress. Racially integrated schools have created serious problems of discipline in many cases, and schools sometimes border on anarchy in the halls.

In several respects, this is an interesting development. This is especially true from the viewpoint of the development of a nation of absolute conformity. The public school system has become a mighty instrument in the hands of the government to promote the views of those who are in power. It has become an instrument, for the establishment of an atheistic religion based on evolutionism. It has become a vehicle to bring about in this country a kind of mass conformity in which the citizenry act more like puppets or robots than individuals who do their own thinking and who weigh government policy intelligently. And all this is a necessary step in the direction of the establishment of a government which is absolutely supreme in the lives of its citizens.

The difficulty is that it takes a lot of money to operate private schools, and the government is increasingly placing the total burden for their support on the parents who send their children there. It is difficult, to say the least, for parents in our affluent age to pay money for education when free education is readily available to them. Whether people are sufficiently disillusioned with public schools to continue to pay such large sums of money as costs continue to soar remains a question. We are inclined to think that, in the final analysis, it will take deep principles to keep these schools operating in the face of rising costs. And finally, only those who are committed to covenantal education in the truth of the Scriptures will continue to support such schools.

A recent issue of Christianity Today carried a rather lengthy article on persecution within Russia. It spoke of a number of actual cases of persecution which have come to the attention of people and organizations in the West. But it also made mention of rather wholesale persecution of all churches and believers who will not permit themselves or their churches to be mere stooges of the government. The article spoke of the many forms this persecution takes. Sometimes leaders of the churches are jailed, sentenced to hard labor, tortured and killed. It told of forced injections of drugs, of searches, of heavy fines and confiscation. It told of authorities who confiscate all the possessions of those who are unable immediately to pay fines levied against them, and of how these possessions are sold to passersby. It told of the confiscation of children who are then shipped off to state institutions for atheistic indoctrination. It told of believers who are incarcerated in psychiatric wards and treated as insane. It told of efforts put forth to confiscate printing plants which are used to print Bibles, Psalters, Hymnbooks, religious pamphlets and the like. The article speaks at length of one religious leader who has been twice imprisoned and whose health is completely destroyed. His four children have signed a statement which asserts that their mother was fired from her job because of her religious beliefs, that one daughter was fired from a hospital job because religion and medicine are incompatible, and closes with a statement; “If our father is not released and if measures are taken in prison which threaten his life, then know you that our entire family is filled with resolve to die alongside him. This we make known to you and believers around the world.”

Many of those who are persecuted have brought their plight to the attention of leaders in the Kremlin; but they have gone further and informed leaders and organizations in the West of their suffering. Some appeals have been addressed to the World Council of Churches, but this organization has refused to act out of fear of offending the Russians who are members of it. Some appeals have gone to the United Nations, but this organization has yet to do anything about it.

It is well for us who still enjoy a great measure of freedom of religion to remember these saints in other lands who suffer persecution for the name of Christ. Their suffering is acute, and they know: far better than we what it means to be faithful unto death. We must remember them in our prayers daily.

In other articles in this same issue, Christianity Today informs us that this same persecution is being carried on in some African Countries. One article which speaks of this persecution reads:

Another African nation has imposed a reign of terror on its citizens and, as in the case of Chad currently and Burundi earlier, suffering is especially intense among Christian believers. One-fourth of the 308,000 citizens of the tiny West African Republic of Equatorial Africa are in exile, tens of thousands have been murdered, most of the parliament members elected in 1968 have disappeared, and the prisons are overflowing according to an investigative report in One World. . . .

The country is 98 per cent nominally Christian, mainly Roman Catholic, with strong Methodist and Presbyterian churches (the latter has about 10,000 communicants). Since 1968 most of the foreign missionaries have been expelled, and “the local clergy have been put under increasing pressure, including imprisonment and torture,” says the report.

Additional information came from the Swiss League for Human Rights, which says Christians are being harassed in an atmosphere of “militant atheism.” Church buildings have been confiscated, church leaders prevented from traveling, and special permits required for church meetings, asserts the league.

One World says a recent presidential decree requires priests and ministers to read a message extolling President Macias at every worship service, and every church building in the land to display his portrait.

In Spain, on the other hand, Protestants who have long suffered persecution from Roman Catholics, who constitute 99% of the population, are enjoying greater freedom than ever before. Spain itself is undergoing changes economically and politically, and these changes seem to be reflected in the religious scene. The 1953 Concordat between Spain and the Vatican is still in force, however. The first article of this Concordat reads: “The Catholic Apostolic Roman religion will continue to be the sole religion of the Spanish nation and will enjoy the right and prerogatives which are due it in conformity with the Divine Law and the Canon Law.” Nevertheless, there is a growing tendency to leave the Concordat unenforced and to give Protestants the freedom of religion they have long sought. 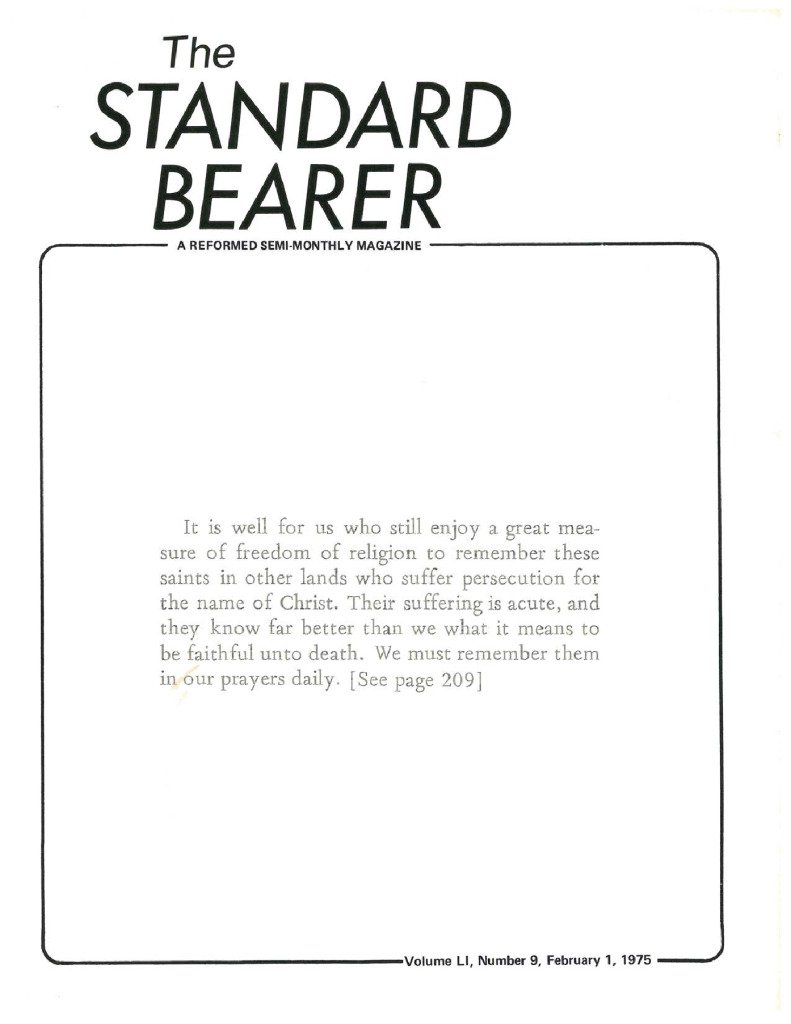