From the Reformed Ecumenical Synod News Exchange, of July 6 and September 7, 1976, we received a brief review of the meeting of the R.E.S. Some one hundred and ten delegates from 38 denominations of Reformed persuasion from around the world met in Cape Town, South Africa, from August 2 to 20. Fifteen of these denominations come from Africa itself.

The R.E.S. met at a time when rioting was going on in Soweto. It was apparently the intent of the R.E.S. to meet in South Africa as expression of interest in and concern with the racial policies of that nation. In addition to this racial issue, several other important items were scheduled for discussion and decision. One day was set aside for a consideration of the biblical teaching of the Holy Spirit. There was scheduled also a discussion of the doctrinal deviations of the Reformed Churches in the Netherlands as well as a consideration of the question whether those churches could simultaneously belong to the World Council of Churches and to the R.E.S. Reports were to treat too the question of Sunday observance—reports which contained divergent views on whether the Sunday remains a creation/redemption ordinance. Two other studies were to be considered: the social calling of the church, and, the nature and scope of salvation.

The R.E.S. reaffirmed an earlier stand suggesting that there was nothing wrong with interracial worship and interracial marriage. The latter was qualified by pointing out that problems could easily arise in such marriages—and all parties ought to be reminded of this.

The Reformed Churches of the Netherlands were asked to give account of their actions in regard to their membership in the World Council of Churches and in regard to their failure to discipline Prof. H. Kuitert and Dr. H. Wiersinga. An advisory committee recommended a decision declaring “membership in the W.C.C. to be inconsistent with membership in the R.E.C.” That proposal was adopted only after an amendment was made as follows: “‘Inconsisitent’ meaning in this instance, a deiviation from the decisions of previous R.E.S. Synods, but does not imply an immediate irreconcilability between the R.E.S. and the churches that are members of the W.C.C.” The denominations involved were asked to give serious reconsideration to this dual membership.

In regard to Prof. Kuitert and Dr. Wiersinga, there was a recommendation that would have ruled the Reformed Churches in the Netherlands to be not in harmony with the membership requirements of the R.E.S. This, however, was altered to express regret because of certain theological developments within this church. Yet, since the Reformed Churches of the Netherlands, through their delegates, stated that they “are faithfully exercising church discipline in the case of Prof. Kuitert and in the case of Dr. Wiersinga,” the R.E.S. urged them to continue this procedure with all due haste, and assured the G.K.N. of their concern, support, and prayer.

In Calvinist-Contact of August 27, 1976, Dr. L. Praamsma reports that on Sept. 17 and 18 of this year the synods of the Dutch Reformed Church (Ned. Herv. Kerk) and the Reformed Churches (Ger. Kerken) met in combined meeting. Local congregations of these two denominations have been holding combined services for several years already. In fact, reports Praamsma, at least one Reformed Church held combined services with a local Roman Catholic Church. Praamsma views this combined synod as a clear indication of the desire for a united church. When the Reformed Churches separated from the N.H.K. in 1834, it was with the understanding that they would gladly reunite as soon as this state church would return to the confession of the fathers. But such a return has not taken place. Yet, since both denominations contain many leaders who have adopted a new and critical view of Scripture and the confessions, these find a basis for unity now. The paper, Waarheid en Eenheid, calls this synodical gathering a “presentation of a totally irresponsible showaf-unity.” In this connection, Praamsma expresses a measure of doubt concerning the wisdom of seeking closer contact between the Christian Reformed Church and the Reformed Church of America. He sees the Reformed Church as having no “confessional unity”—a matter which ought first to be discussed before taking additional steps toward closer fellowship.

Perhaps to most of our readers, the name “Rudolf Bultmann” means nothing. Nor is that surprising. What this man had to say was not for the edification and spiritual comfort of true Christians. The man, however, is regarded as a great theologian in many circles. This “theologian” was from Germany. The views of this man have been popularized in English through the book of Bishop Robinson, Honest to God.Bultmann was the man who would “demythologize” Scripture. He regarded as “myth” virtually all the significant truths of Scripture. This man believed that Jesus was not conceived by the Holy Spirit, was not born of the virgin Mary, that though He did suffer and die by crucifixion, He did not descend into hell, did not rise again, did not ascend into heaven, does not sit at God’s right hand, will not come again to judge. He believed in neither heaven nor hell. Yet many who called themselves “Christian” were influenced by this “theology”—even some within the Reformed circles. This Bultmann died last July 30 at the age of 91. What an awful way to find out that hell is real after all!

CARTER AND HIS RELIGION

Reports have been given concerning the religious convictions of the two candidates for the presidency. The sincerity of each, at times, has been questioned.The Christian News of Aug. 30, 1976, records the report of a Lutheran pastor as given in the Milwaukee Journal of Aug. 20, 1976. Part of this report reads:

The Journal reports that Jimmy Carter’s brand of religion worries some people, especially Roman Catholics, because of his permissive, even approving, approach to abortion on demand (The Journal, July 16).

As an evangelical Lutheran Christian I suppose I should be delighted that a “born again true believer” may be headed for the White House, especially after a series of presidents who seemed to be lukewarm at best in their religious convictions, or at worst appeared to exploit. religion for crass political purposes by inviting big name religious leaders to a weekly game of musical chairs in services at the White House during the Nixon years.

However, I, too, am troubled by the Carter brand of religion, over and above his stand on abortion. On the campaign trail, candidate Carter sought to reassure a predominantly Jewish audience in New Jersey by saying: “I worship the same God you do.” Surely the sincerity of a man who contends that he never lies should not be questioned, but it should be pointed out that Carter’s statement in New Jersey is completely at odds with a basic truth of the Christian faith. It is apparent that the Plains, Ga., Sunday school teacher still has a big gap to close in his knowledge of the Bible.

In the Scriptures Jesus insists: “I am the Way, the Truth, and the Life: No man cometh unto the Father but by Me”

…Because of his fuzzy stand on the God issue and his failure to grasp a golden opportunity to confess Christ before a group of non-Christians, the competence of Carter as a reliable spokesman for evangelical Christians must be called into question.

Compromise plays a key role in political maneuvering, but it is completely uncalled for when it comes to confessing Christ. Jesus said: “He that is not with Me is against me.” In New Jersey, at least, Carter was caught straddling the fence and was unconvincing as a confessor of Jesus Christ.

In past years there has been great dissent within the Missouri Synod Lutheran Church. The division is between the “conservatives” and the so-called “moderates.” The “moderates” call into question the event-character of many of the Scriptural accounts. These do not want to maintain the traditional and Scriptural view of inspiration of the Bible. After the “conservatives” gained control of the principal offices of the denomination, the “moderate” president of their Concordia Seminary was removed from his position. The result was that most of the professors and students also left to establish Seminex (Seminary in exile). Recently, some of the “moderates” have established a separate denomination: the Association of Evangelical Lutheran Churches (AELC). As of Aug. 16, there were 32 congregations affiliated—and doubtlessly more by now. The aim of this group is to maintain their “moderate” views and to seek affiliation with other Lutheran bodies in the country. 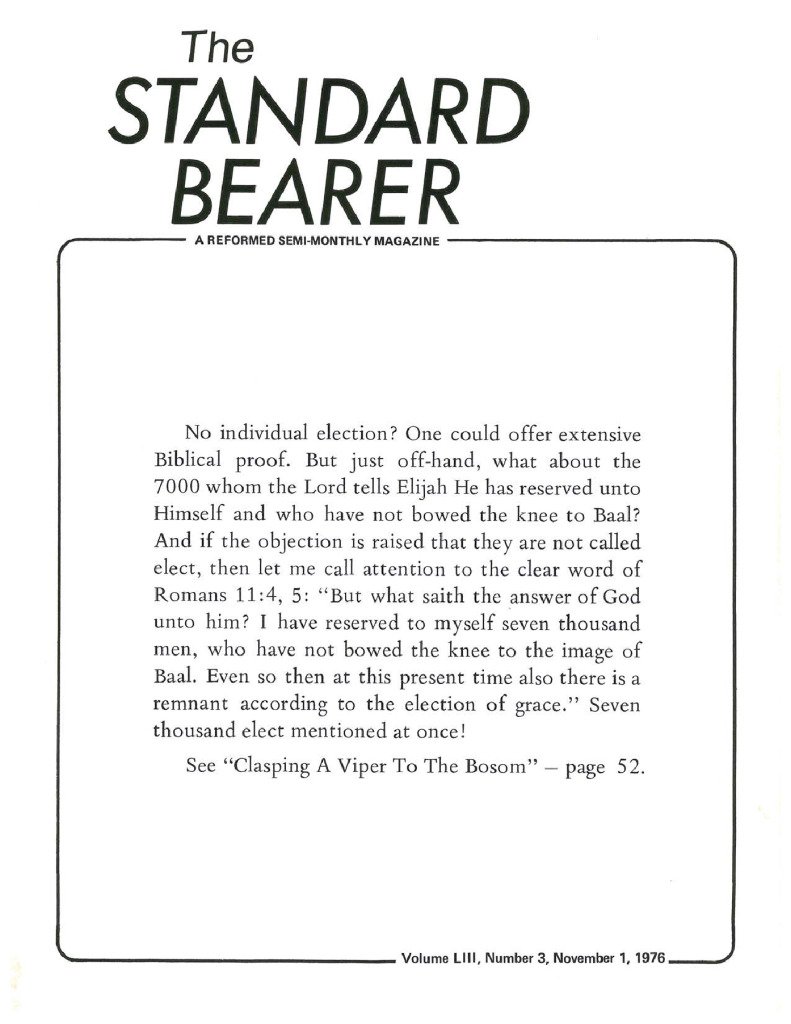