Several months ago there was a very sad “accident” in Grand Rapids. Three young men, present or past students of Calvin College, were killed in an auto accident. The lives of three young men were suddenly snuffed out. Of course, such an “accident” strongly affects families, friends, and even a whole community.

Since two of these young men had Canadian roots and were well-known there, the Calvinist Contactcontained an account of the accident (without all of the details presented in the Grand Rapids’ Press) in its February 4, 1983 issue. I am not concerned with that report, but rather with a response to it—and an answer by the editor of that paper. A reader wrote:

When I pulled my C.C. out of our mailbox this week, the top headline immediately jumped out at me: “Cruel accident takes lives of three young men.” It disturbed me because I would expect to find that kind of a line in the Star or the Sun, but certainly not in C.C.

In the obituary column I found the same event described this way: Our heavenly Father, all wise and all merciful, called to His eternal home. . . .

Though death is alien to us, though the passing of promising young men grips us deeply, our grief should not be for those young men, but for their loved ones who grieve. How is it possible to refer to the deeds of our wise and merciful God as a cruel accident?. . .

The editor gives answer in a brief note under the heading: “God is not the author of accidents”:

Most of the time we do not reply to letters. But there are times that an editor should reply to a letter. This is such a time, in my opinion,, because not to answer would leave some misunderstanding and allow a view of death and suffering to continue in our circles that is not helpful.

The title “Cruel accident takes lives of three young men” was not a carelessly tossed off headline nor are we trying to be sensationalistic. The news struck us hard, as it did others, I am sure. The accident seemed so cruel. Quite often in a similar accident several will survive, but not this time. All three young men were killed.

We took care not to call the accident a tragedy. There is no room for tragedy in the life of Christians. It was a short news item that we felt should be run because it is our task to inform the Reformed community. We could have run it a week earlier. But because we did not want to treat it like a “hot” item, we kept it over for a week. On reflection, we should perhaps have given it a less prominent place.

But my main concern is with the idea in the letter of . . . that the accident can somehow be tied in with the deeds of our God. Not for a moment should we think that God caused that accident. He did not want those three young men to die. In His infinite mercy He can turn evil to our profit, call the young men to Him in His eternal home and comfort the parents and the community. But the accident is and remains a cruel accident which God does not wish to happen to anyone. It is our collective and individual sinfulness that has brought suffering into this world. Our loving God did not cause it.

That God allows such an accident to happen is a mystery before which we, like Job, should bow in reverence.

My concern is the statement of the editor, “In my opinion, . . . not to answer would leave some misunderstanding and allow a view of death and suffering to continue in our circles that is not helpful.” And again he shows what he has in mind by stating, “Not for a moment should we think that God caused that accident. He did not want those three young men to die. . . . The accident is and remains a cruel accident which God does not wish to happen to anyone. . . . Our loving God did not cause it.”

Some troubling questions arise when a “Calvinist” editor makes the above claims. Who is in control of events—”accidents” or otherwise? What does the Sovereignty of God mean to the Reformed Christian? Can Sovereignty mean that God “permits” certain things to happen that He does not really “cause” or even “wish to happen”? What does such a view do to the truth of God’s providence? Does He, or does He not, govern all things that take place?

What does this view do for the “comfort” of a Christian; If “fate” or “chance” or even man’s sinfulness controls events, what a discouragement life itself would become! What must I think of my God—Who presumably does not want these things to happen, yet permits them to be? One can resort to a claim of “mystery,” but the fact is that this presents not mystery but contradiction.

Trouble is, the editor who would remove “a view of death and suffering . . . in our circles that is not helpful,” is seeking to remove a view that is Reformed, confessional, and Scriptural. Reformed writers make clear that theirs is not the view which the editor of C.C. proposes. Calvin writes extensively on providence in his Institutes. A study of this in his book is instructive. I quote just a small portion:

If any one falls into the hands of robbers, or meets with wild beasts; if by a sudden storm he is shipwrecked on the ocean; if he is killed by the fall of a house or a tree; if another, wandering through deserts, finds relief for his penury, or, after having been tossed about by the waves, reaches the port, and escapes, as it were, but a hair’s-breadth from death,—carnal reason will ascribe all these occurrences, both prosperous and adverse, to fortune. But whoever has been taught from the mouth of Christ, that the hairs of his head are all numbered, will seek further for a cause, and conclude that all events are governed by the secret counsel of God. And respecting things inanimate, it must be admitted, that, though they are all naturally endued with their peculiar properties, yet they exert not their power, any further than as they are directed by the present hand of God. They are, therefore, no other than instruments into which God infuses as much efficacy as He pleases, bending and turning them to any actions, according to His will.

Later Calvin writes, in connection with a quote from Augustine:

He (Augustine) certainly does not suppose God to remain an idle spectator, determining to permit anything; there is an intervention of actual volition, if I may be allowed the expression, which otherwise could never be considered as a cause.

L. Berkhof, in his Systematic Theology, insists on the same thing in describing the idea of “government” within the concept of providence (cf. p. 176).

But the editor of the C.C. will have to correct our Reformed confessions too. We read, for instance, in the first Lord’s Day of the Heidelberg Catechism, that Jesus “so preserves me that without the will of my heavenly Father, not a hair can fall from my head; yea, that all things must be subservient to my salvation. . . .” Later, in Lord’s Day 10, we read concerning providence that it is “the almighty and everywhere present power of God; whereby, as it were by His hand, He upholds and governs heaven, earth, and all creatures; so that herbs and grass, rain and drought, fruitful and barren years, meat and drink, health and sickness, riches and poverty, yea, and all things come,not by chance, but by His fatherly hand.”

We believe that the same God, after He had created all things, did not forsake them, or give them up to fortune or chance, but that He rules and governs them according to His holy will, so that nothing happens in this world without His appointment. . . . This doctrine affords us unspeakable consolation, since we are taught thereby that nothing can befall us by chance, but by the direction of our most gracious and heavenly Father; Who watches over us with a paternal care, keeping all creatures so under His power, that not a hair of our head (for they are all numbered) nor a sparrow, can fall to the ground, without the will of our Father. . . .

But what does Scripture itself teach? Did God simply “permit” it to rain on the earth in the days of Noah, and did God not want the destruction of the wicked then? (see Gen. 7:4). Did God simply “permit” but not desire, the destruction of Sodom (see Gen. 18:17)? Did God permit Joseph to be sold into Egypt, or did He sovereignly direct that (Gen. 50:20)? Did not God say to David, after his sin with Bathsheba, “Behold, I will raise up evil against thee out of thine own house. . . .” (II Sam. 12:11)? And did not Shimei curse fleeing David because God said to him, “Curse David” (II Sam. 16:10)? Or there is the oft-quoted words of Christ, found inMatthew 10:29-30, “Are not two sparrows sold for a farthing? And one of them shall not fall on the ground without your Father (by “permission” or by “sovereign will”?). But the very hairs of your head are all numbered.”

Obviously, the editor of C.C. has a lot of correcting to do of views he considers “not helpful.” For me, I prefer and cling to the old Scriptural, Reformed, confessional truth that God is Sovereign—and in His sovereignty He controls and governs all things, even cars that are involved in “accidents.” Though through tears the child of God can confess, not that “My God didn’t really want it to happen,” but that “My God so governs all things that even my light affliction worketh for me a far more exceeding and eternal weight of glory” (II Cor. 4:17). Though I can not always understand, I acknowledge His wisdom in directing all things which befall me too. Any other statement destroys the Christian’s comfort.

The Gospel according to?

Many enjoy reading cartoons and comics. Some are atrocious, some are very blasphemous and surely harmful spiritually. Yet some strike close to home and emphasize in simple form a very important point. The Grand Rapids’ Press, March 29, 1983, had one such editorial cartoon. It pictured the congregation being welcomed by the pastor at the church door. On the bulletin board outside of the church were listed the topics for the day: 10 a.m.—”Nuclear Arms Workshop”; 11 a.m.—”Examining the National Defense”; Noon—”Stop the Godless Commies for Jesus”; 1 p.m.—”El Salvador Seminar”; 2 p.m.—”Understanding Nuclear Holocaust”; 3 p.m.—”Getting Tough, With Moscow.” In the corner, a little character declares: “Now we’ll all sing, ‘Onward Christian Military Advisers.’ ” The point was well-made. Paul’s confession, “I determined not to know any thing among you, save Jesus Christ, and Him crucified” (I Cor. 2:2) seems to be hardly the position of most churches today. 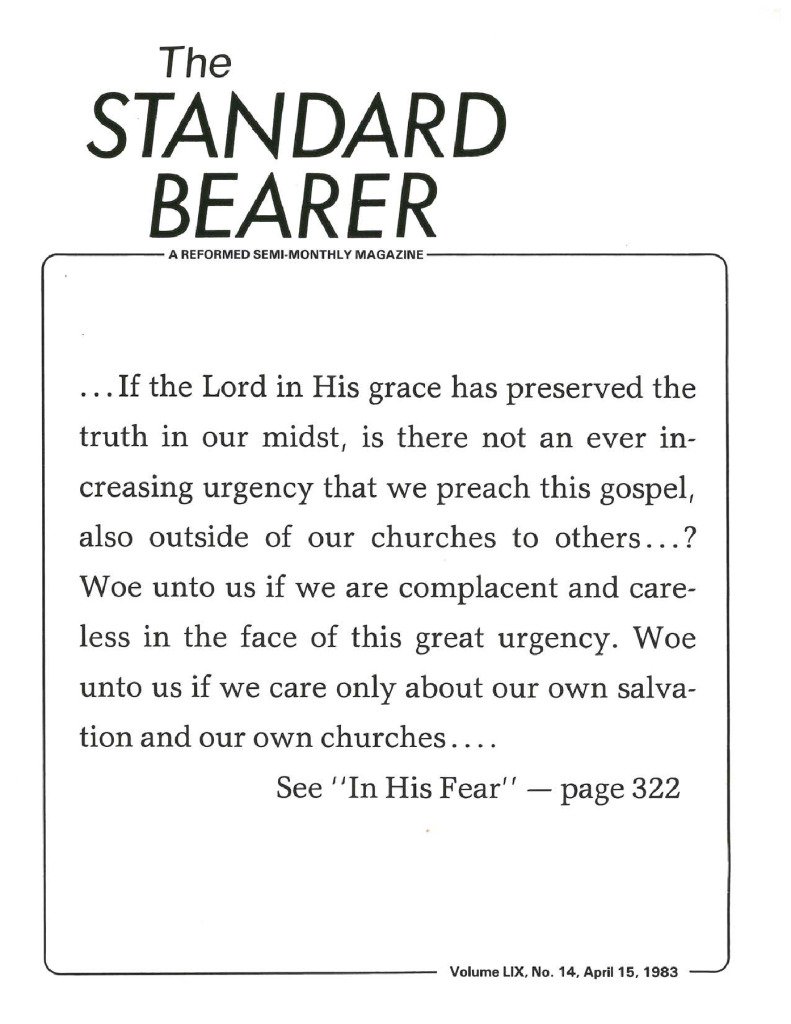