In an editorial in the Banner of Oct. 31, 1975 the editor wrote on the subject: REFORMATION CHURCH OR MODERN METHOD? We quote the concluding remarks of this editorial, page 7:

Well, especially now that it’s Reformation Day once again, why not pursue this subject further for yourself? Explore the tension between the conception of the Church as Mother of Believers and a good deal of what is now called “evangelism.” Compare, say, the sermons reported in the Acts with the techniques recommended by popular “methods.” Ask why Paul lingered so long, “reasoned” so much, in various places if salvation can be “given” and “accepted” in but a few moments. Compare the requirements laid upon would-be believers by Moses, the Prophets, the Gospels, and the Epistles with the easy one-step, two-step, or four-step techniques for “church growth” now being substituted for those requirements.

And then, in the spirit of the Reformers, ask yourself; which way is my way? Do I stand, and intend to stand, in the footsteps of those who lived and died to proclaim the Church as Mother of Believers? Or will I choose, or have I already chosen, another way?

Are there, indeed, for true children of the Reformation, two ways? Both leading to eternal life?

The undersigned would surely like to ask the editor of the Banner the question: are there, indeed, for true children of the Reformation, two ways? We surely agree with the above sentiments. But, editor of theBanner, are you not measuring with two measure? Do you really reject all that which is now called “evangelism”? Do you really reject the methods that are pursued by Billy Graham? Does your church really reject these methods? Do you not believe in the well-meaning and general offer of the gospel? Have your churches not taken a stand in favor of universal atonement, in the permanent appointment of a seminary professor who believes in universal atonement and who publicly has spoken and written that he is in disagreement with the Canons of Dordt? Indeed, in the light of the Reformation, I urge you to consider these matters very seriously.

Dr. Leonard Greenway is in charge of OUR QUESTION BOX in THE OUTLOOK. In the November, 1975, issue of this magazine, page 18, we read the following:

QUESTION: What, in your opinion, is the crucial issue facing the Christian Reformed Church today?

ANSWER: Since some readers of THE OUTLOOK are not members of the Christian Reformed denomination, this question may not immediately interest them. Yet, I feel I should answer it here because of the nature of the issues involved.

As I now view the matter, the crucial issue is the nature and extent of Biblical authority in the light of Report 44 that was adopted by the Synod of 1972. Notice, I have italicized the word “now” and that carries a confession on my part. The confession is this: When Report 44 initially was under discussion in our Church, I was not alarmed by it as I am now. Perhaps I was not as alert and discerning as some brother ministers and others who flashed the red light soon after the Report appeared. Or perhaps, I was too deferential to the distinguished members of the committee who prepared the Report with obvious painstaking efforts to be thorough.

I have a different stance now. Belatedly I am coming to see Report 44 as a dangerous framework within which liberties can be taken with the Bible which formerly were not tolerated by us. I fear that the Report fosters an attitude which allows one to say that the authors of the books of the Bible conceivably on occasion could have been under influences that were in successful competition with the supervision of the Holy Spirit.

I want to do more thinking about, the matter before I become more specific; but, as of now, my fear is that if we don’t watch out, we are going to have a split in the Christian Reformed Church, and the split will be occasioned by current trends in the discussion of Biblical authority. The crack is already visible!

Let me add this postscript: Is it not significant that within the decade or two during which we had the discussions that eventually produced Report 44, the Christian Reformed Church appears to have passed its peak and to have gone into spiritual and ecclesiastical decline?

I am sure that this article merits our consideration. Dr. Greenway expresses fear. We too, have our serious misgivings. When does it happen that a church, having passed its peak and having gone into spiritual and ecclesiastical decline, recovers from such a decline? That church continues in its departure from the Word of God.

Dr. Greenway confesses that when Report 44 was initially under discussion he was not alarmed by it as he is now. How strange! He acknowledges that there were brother ministers and others who flashed the red light. How true! And, yet, he was not alarmed at the time as he is now. I suppose it is true that, loving a child, a parent is hesitant to notice anything that may be wrong with the child. On the other hand, it is also true that, loving that child, a parent will be very sensitive and responsive to any symptom which may indicate that all is not well. This is also true spiritually. How strange that Dr. Greenway should not have been sufficiently alarmed about Report 44, especially because Report 44 concerns the infallibility and authority of the divine Scriptures!

Finally, Dr. Greenway refers to one or two decades during which discussions were held which eventually produced Report 44. It might be interesting if that brother would pinpoint those things that led to this report. What does he have in mind? As far as the undersigned is concerned, we would call Dr. Greenway’s attention to the Three Points of 1924 and emphasize the fact that it was no later than 1924 that the Christian Reformed Church passed its peak and went into spiritual and ecclesiastical decline. We only wish that the Christian Reformed Church would take this into serious consideration.

The Banner and Report 44

By this time (if so be that the bearer has not had the ill fortune of falling afoul of highwaymen) you, our Mother, are in receipt of one or two missives from our hand. In both of these we make inquiry concerning the persistent reports that reach us to the effect that you are not as clear in your thinking as we would fain have it . . . .

We have before us a pamphlet which you had so kindly sent us earlier. It bears the title: The Nature and the Extent of Biblical Authority. It is a booklet that must have cost much midnight oil to prepare as well as considerable expense to produce and distribute.

Then, after expressing that which made them glad when reading the pamphlet, namely, that it wishes to continue in the Reformed tradition, the letter continues:

But Mother (permit us to be free and open with you; as free and open as we were when we still ate at your board), if all that you say in the pamphlet is clear to you, then we are far apart—for much is everything but clear to us. We must conclude that one of us suffers from confusion, the malady that has given your city the unhappy name of “Babylon,” the mixed-up city. We find that, in the pamphlet, ideas have been “mixed or blended in such a way that things cannot be distinguished,” the very thing which our barber-surgeon tells us is the definitive feature of the malady we fear, its distinguishing symptom . . . .

Travelers from abroad tell us that the language you use in the pamphlet reminds them strongly of the way your older sister (the one who stayed behind when you as a girl went to the New World) has begun to talk. The thought troubles us that perhaps your thinking is being affected by hers (this “older sister” refers to the Reformed Churches of the Netherlands—H.V.).

Before you frown at us for even suggesting this, may we ask you to recall how it was that you got started on this whole thing about “the nature and extent of biblical authority”? You will recall that it was this Old World, lowland sister of yours that put you up to it. This older lady, according to reports that reach us, is not in the best of health these days (reports persist that her church buildings are only half full). Was it not because she didn’t know anymore what she thought of the Bible that she coaxed you to do her homework for her, prodding you to pull the chestnuts out of the fire? (Our librarian tells us that up to the date of this writing she has herself done nothing to solve her problem—which, if true, does not speak well of her, neither of her seriousness nor of her diligence). Did not she say, and that quite openly, that what had been said previously by those of our tribe, that “Scripture speaks with divine authority and trustworthiness on all things on which it chooses to speak. . . .” was no longer adequate and that a “new and elucidative confession of the inspiration and authority of Scripture” was needed?

Didn’t it occur to you at the time, Mother, whom we love, that if indeed your older sister felt she needed a “new” (and therefore different) confession touching the authority of Scripture she should work out her problem, with you offering, at the very most, to give your opinion on that “new” formulation, if and when it was forthcoming? 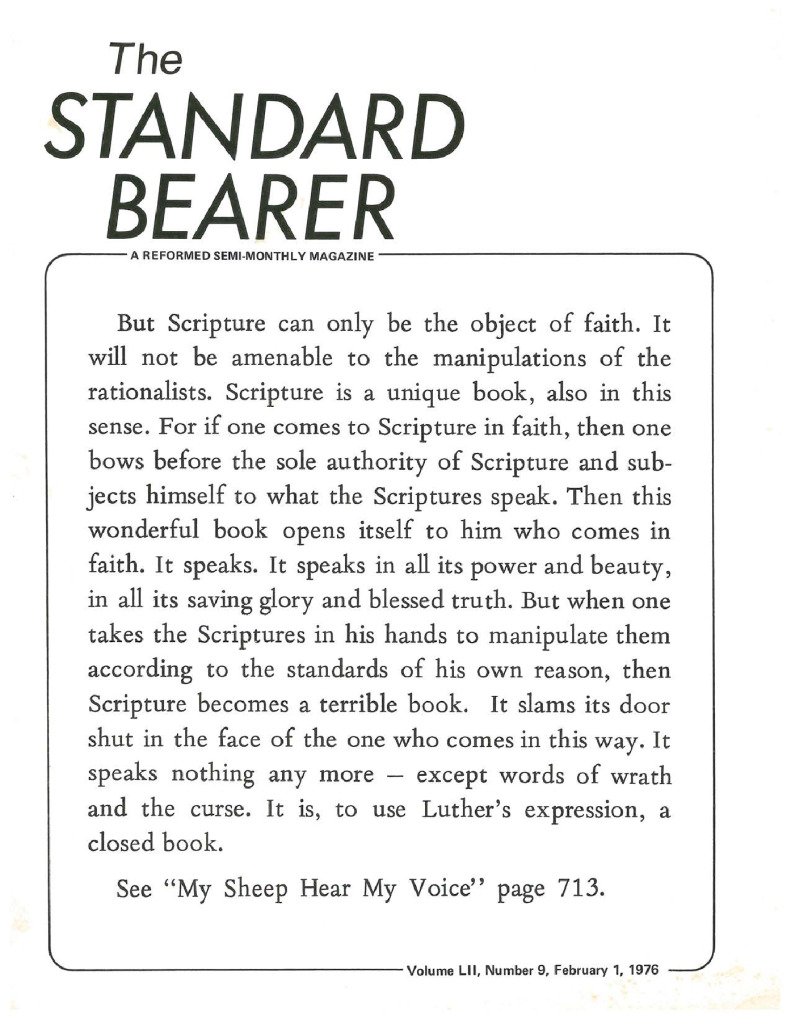