The Reader’s Digest, a magazine which comes to many of our homes, has always been a strong proponent of birth control. In the latest issue, a brief news item was carried under the title, “Singapore’s Birth-control Success Story.” It reads:

The birth rate per 1000 declined by about six percent between 1966 and 1973 in Singapore, a densely populated city-state which has a comprehensive birth-control program. The Singapore program, one of the most successful in Asia, provides, as a special facet, penalties for failure to cooperate.

The results: 60 percent of married women under age 44 are using some form of contraception; one married woman in ten of childbearing age has been sterilized. (Footnote: Depending on a patient’s economic classification, if sterilization is carried out after a delivery, the delivery charges in government hospitals may be waived.)

The penalties for those who fail to curb births: If a family has more than three children, the working mother forfeits paid maternity leave; the delivery fee is higher; at school age, the children No. 4 and up generally get lower priority for choice of primary-school admission; the families no longer get priority in the allocation of subsidized public housing.

These things are realities in Singapore. It is only a matter of time before this country adopts some similar policies. Whether the wicked will admit this or not, the ultimate goal is to prevent the Church from bringing forth the promised seed of the covenant.

In an article in The Reformed Journal, Dr. Nicholas Wolterstorff discussed a three-fold cleavage in the Christian Reformed Church of which he is a member. This cleavage was between Pietists, Doctrinalists and Kuyperianists, or, in short, Pies, Docs and Kuyps. Pietists were characterized chiefly by considering a cultivation of personal piety as a proper response to the Gospel, by an avoidance of culture and by a “more or less distinct separation from society.” Doctrinalists consider a proper response to the Gospel as being an acceptance of true doctrine and a strong emphasis on theology. Kuyperianists consider the proper response to the gospel to be a joining “with those people whom God has called out from the world to do His will in all areas of life” and a seeking for the “reformation of society in accord with His laws.”

In the latest issue of The Presbyterian Journal, Robert M. Metcalf Jr. analyzes this article in terms of the Presbyterian Church; He finds that Wolterstorff’s analysis is helpful in understanding what is going on in Presbyterianism as well as in the Christian Reformed Church. And he emphasizes that an overemphasis on any one of the three to the exclusion of the others spells disaster for the Church. He writes:

Where any one of the three patterns is overemphasized—or when two of them are—then there occurs actual disobedience to God and His Word, with weaknesses and warping becoming obvious in the results which show up.

Shortcomings and failings sprout when any one or two of the Christian ways of life are too much emphasized at the expense of the others.

We are not particularly interested here whether this is or is not a correct analysis of current trends either in the Christian Reformed Church or in Presbyterian circles. This is not for us to say. Nor are we interested in entering into the question of whether what is called “Kuyperianism” is even a legitimate emphasis which is supposed to characterize the people of God in their “response to the Gospel.”

What concerns us is the solution to the problem which is given. The solution to the problem is said to be a proper balance between all three possible “responses to the Gospel.” If the life of the Church is to be healthy, all three tendencies or emphases must be held in some kind of tension. All three must be balanced over against each other. All three must be maintained and kept in the life of the Christian. When all three are not preserved carefully, an overemphasis on one (or two) will result in imbalance. When all three are kept in balance, only the strengths of the three will be evident, and the Church will be sound in her confession and walk.

This line of reasoning strikes me as important enough to discuss. The same type of reasoning is often applied to other areas of the life of the Church. I have heard it said, for example, that there is doctrinal preaching and practical preaching. Either one taken by itself is a distortion of true preaching. When the two are kept in proper balance and held together in proper tension, sound preaching results. But is this true? I recall, to cite another example, that at the time of my graduation from college, the speaker addressed the gathering on the subject of “The Balance Which is Calvinism.” While a great deal of the speech has been forgotten with the passing of the years, I recall distinctly that the gist of the speech was that the genius of Calvinism was its ability to maintain a. proper balance between opposing doctrines and viewpoints which, in themselves, seemed to be contradictory. He cited as one example the ability of Calvinism to hold in proper tension the doctrines of God’s sovereignty and man’s responsibility. But is this true?

It seems to me that there is a fallacious assumption in this line of reasoning. It goes something like this. Pietism is a legitimate “response to the Gospel,” but Pietism is also partly wrong. It is right in some respects; it is wrong in others. The same is true of emphasis on doctrine. Emphasis on doctrine can be good, but it can also be bad. The only way therefore, to keep the good of Pietism and escape the bad, and the only way to maintain the good in doctrinalism and avoid the bad is to put both together. In that way pietism will curb the excesses of doctrinalism and doctrinalism will negate the evils of pietism. It is like encouraging the marriage of a man who is a good provider but who possesses a violent temper with a woman who is a profligate spender, but has a mild personality in the hopes that the two will curb each other’s excesses.

Is this the way it is in the life of the Church? I think not. If pietism is a proper response to the Gospel, how can it have inherent evils? Does God command us to respond (I am not particularly fond of the expression, “response to the Gospel,” but use it because it is used in the articles, H.H.) to the Gospel in a way which is partly good and partly bad? How can this be? After all, pietism and doctrinalism both have inherent weaknesses which will certainly appear unless they are checked by each other.

We do well to search for the solution in another direction. The danger in the above analysis seems to me to be a certain setting at antipodes ideas which are not mutually exclusive. If one’s response to the Gospel is pietistic, there is nothing good about that. It is wrong and ought to be condemned. If one’s response to the Gospel is doctrinalistic, this is wrong. It ought to be condemned. There is nothing good about that. The solution to the problem is not legitimatizing two opposite reactions and keeping them in proper balance. The solution to the problem is to understand that a true doctrinal response is, at the same time, a true response of Christian piety. The two are one. And doctrine stands on the foreground. The Scriptures are the revelation of God in the face of Jesus Christ. God has told us about Himself—Who He is and what He does—in order that we may know Him. And, as a matter of fact, the knowledge of God is itself eternal life: “And this is life eternal, that they might know thee the only true God, and Jesus Christ, whom thou hast sent.” (John 17:3) When this true knowledge of God is appropriated by faith and confessed as the very truth of the Scriptures, a life of piety and godliness will inevitably result. Always true piety flows forth from a confession of the truth. For one’s, confession of the truth must be a confession which is reflected in the whole of his life. A doctrinalism which does not result in a pious walk is an evil doctrinalism; a piety which is rooted in anything else but sound doctrine is an evil piety. The two belong together and are really one.

If a man is a good provider but of a violent temper, he ought to control his temper by grace. If a wife is a mild person but a profligate spender, she ought to learn to be a good steward in God’s house. But they ought not to be married in the hopes that they will be able to curb each other’s excesses.

A reader sent me the following clipping. It contains a question addressed to Billy Graham and answered by him.

The Bible says: “Believe on the Lord Jesus Christ and thou shalt be saved.” What did you mean when you said we are saved by God’s grace?

We are saved both by God’s grace and by our faith in Christ. They are not two ways of being saved but two aspects of the same thing. Grace means “unmerited favor.” It means that we receive something we do not deserve. God saves us, not because of something we have done or can do, but rather because of something He has done for us. That is his grace.

But God does not force this salvation on us. He offers it to us and we either reject it or we receive it, by faith. Grace is God’s giving, faith is man’s receiving. The Bible says: “For by grace are ye saved through faith; and that not of yourselves; it is the gift of God, not of works, lest any man should boast.”

The Pelagianism in the above quotation is so obvious that it needs no comment. 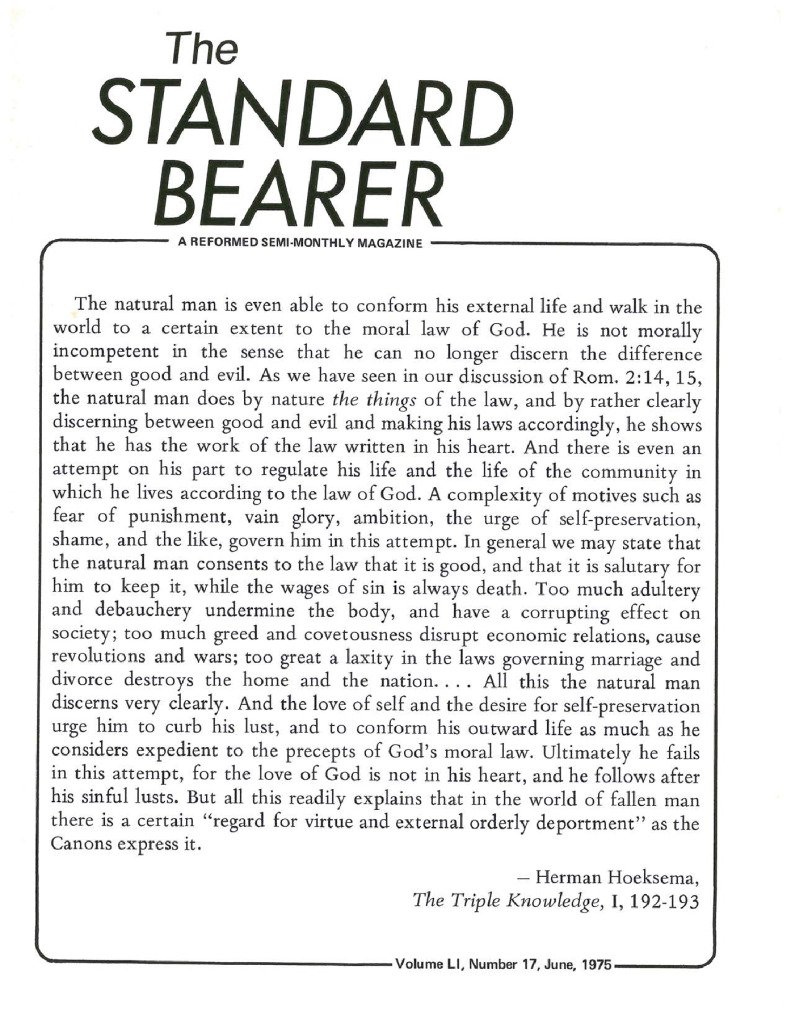