A few issues back we reported that a bill, C-250, was pending before the Canadian legislature. This bill petitioned the Canadian parliament to declare “sexual orientation” (read: “those living as homosexuals”—kk) as an “identifiable group,” placing them in the same category as various ethnic groups, and therefore protected by law against any perceived discrimination, just like ethnic groups. It intended to categorize all speech deemed “anti-gay” as criminal offense. That legislation is now, as of April 28, law in Canada. It sailed through their Senate by a vote of 59-11. Anything but close.

To say that this law is going to have severe consequences on the life and freedom of Christians living in Canada and on the rights and privileges of churches is an understatement, to say the least. Those who promoted the bill assured the Christian public that churches would have nothing to fear in the free exercises of their speech and practices. We have as much confidence in that reassurance as in Satan’s reassuring Eve “Ye shall not surely die.”

In an article entitled “Remaining Silent” (World Magazine, May 8), Lynn Vincent informs us that in Canada, already “[b]efore C-250 it was … illegal to publish, distribute, mail, import, or speak any communication that could be perceived as promoting or inciting ‘hate’ against ‘identifiable groups,’ such as members of a certain race or gender. The new law recognizes gays and lesbians as an identifiable group—and makes any person who criticizes homosexuals publicly subject to two years in prison.” Vincent sees nothing but evil coming from this bill, and gives instances of how the previous, less stringent hate-speech laws have already been used to deny various Canadians their basic religious freedoms and rights.

The bill’s salient text reads like an Inner Party edict out of [G. Orwell’s book] 1984: “Every one who, by communicating statements, other than in private conversation, willfully promotes hatred against any identifiable group is guilty of … an indictable offence and is liable to imprisonment for a term not exceeding two years.”

That punishment might not be enough to suit Svend Robinson, the left-wing parliamentarian who authored C-250. In an article in the Toronto Globe last year, Mr. Robinson made it clear that he hopes his measure will criminalize not violence, but speech per se, making “the current use of homophobic pejoratives in public schools and in public places” socially and criminally reprehensible.

On record as labeling Christian leaders “ecclesiastical dictators,” Mr. Robinson was the first openly gay member of the Canadian legislature. He is also the most recent member to step down. Video surveillance cameras recorded the lawmaker as he swiped a $50,000 ring from an auction house (World, May 1)….

That kind of instability, and his history of anti-Christian invective, has Canadian conservatives skeptical of Mr. Robinson’s claims that C-250—which lives in spite of its author’s demise—provides a religious exemption. The bill does state that a person won’t be prosecuted for anti-gay speech “if, in good faith, he expressed … an opinion based on a belief in a religious text.” But at least one Saskatchewan court has already held that certain Bible passages expose homosexuals to hatred.

Even without C-250, London, Ontario, officials recently slapped a Christian mayor with a $10,000 fine for refusing to proclaim “Gay Pride Day.” A Christian businessman in Toronto was fined $5,000 for refusing to print materials for a gay-rights group.

In light of C-250’s passage, church-law analysts already are advising religious leaders on how to shield themselves. Attorney Bruce W. Long in a March issue of Church Law Bulletin, wrote: “Churches and religious organizations may want to consider avoiding public criticisms of identifiable groups … limiting opinions to private conversation, and if targeted or investigated, relying on the constitutional right to remain silent.”

Note, the legal advisors suggest “limiting opinions to private conversation….” Such advice, for all its good intention, strikes me as being strangely flawed. First, since when is the condemnation of homosexual behavior a matter of the believer’s “opinion”? It stands as biblical truth. And if one states as much, will the state consider it mere “opinion”?

Second, what about sermons, which are open to the public? How long will they be regarded as “private conversation?” Not long, we fear.

And thirdly, there goes the church’s right to testify in public ways against the sins of this present age, and the call to repent or perish. Remain silent? How is that an option for the apostolic church? We are to obey God rather than men.

Troubles loom north of the border for those who will be faithful to their Lord. It is a portent of things to come for the “southern” neighbor.

Part and parcel of this whole

“gay-rights” movement is the movement in the States to legalize gay marriages. In a number of states, gay marriage advocates are moving vigorously to introduce legislation that would redefine marriage and legalize same-sex relationships as marriage. And in case after case “either judges are redefining state laws or defiant mayors are disregarding state laws to force legal confrontations.”

As I write I have a packet of information in front of me sent to the Grandville PRC via Mr. Don Doezema (yes, our very own) as Stated Clerk of our Synod, a packet sent to other of our Michigan churches as well. It is a packet of information sent over the signature of a certain Kimberley Fraser of the Family Research Council in Holland. She is acting for Family Research as manager of a Marriage Amendment Petition Drive here in Michigan. The packet includes a request that we distribute information to our members about the marriage issue here in Michigan. Its purpose is twofold: first, to inform us of a drive to place a proposal on the ballot box in the upcoming November general election that will protect the present law in Michigan that defines marriage as that of a state-approved union between a man and a woman; and second to urge us to encourage our members to sign the petition to get the proposal on the ballot box this fall.

The occasion for this proposal is simple and in my judgment compelling. The issue is alive here in Michigan. At the moment this state has a law that defines marriage in terms of a union between a man and a woman. In 1996 this state passed a Defense of Marriage Act (Public Act 324). This declares in part, “Marriage is inherently a unique relationship between a man and a woman. As a matter of public policy, this state has a special interest in encouraging, supporting, and protecting that unique relationship in order to promote, among other goals, the stability and welfare of society and its children. A marriage contracted between individuals of the same sex is invalid in this state.” That is pretty clear.

However, as the material I have points out, “[L]ike California and Massachusetts, a local public official or court could declare that Public Act 324 is contrary to Michigan’s Constitution and, therefore, is void. In order to avoid the chaos that other states are now experiencing, Michigan must pass a constitutional amendment that clearly preserves marriage as a union of one man and one woman.”

The trouble is, a concerned representative from the state proposed just such an amendment to the constitution (bill HJR U), one that would preserve marriage as a union between one man and one woman. It failed to get the 2/3 majority needed.

Now what? As the packet reads:

This is where you come in: if Michigan residents can garner 400,000 signatures, the amendment will be placed on the ballot so that the people—not the politicians or the judges—determine whether marriage is protected or redefined out of existence. The time is short, as the petitions have to be submitted by July 1, 2004 to the Citizens for the Protection of Marriage.

What is being proposed reads as follows:

A proposal to amend the Michigan Constitution by adding a new section 25 to article I (or if section 25 of article I already exists, then this proposal shall add a new section to article I in the next available numeric order) to read as follows: “To secure and preserve the benefits of marriage for our society and for future generations of children, the union of one man and one woman in marriage shall be the only agreement recognized as a marriage or similar union for any purpose.” This proposal is to be voted on at the November 2, 2004 General Election.

This is a necessary and important piece of legislation that directly affects us as Christians and as churches. We do well seriously to do what we can as churches and citizens of the state to get such legislation on the books and into the constitutions not only in Michigan, but in all the states in which we live. Fraser reminds us what is at stake in this issue, if left to the judges and the radical left.

For those pushing the homosexual agenda, tolerance is a one-way street—their way. Where is their tolerance targeted? The church. Just north of us in Canada, the Parliament passed Bill C-250 last week, making it a crime for anyone to publicly criticize homosexuality. Known as the “chill bill,” the law makes it illegal to advocate traditional Christian opposition to homosexual sex. The quoting of Scripture will soon be legally defined as “hate speech.”

Already in Sweden, an anti-hate speech law passed to protect homosexuals explicitly covers sermons. A Pentecostal minister there is facing charges for using Scripture references that state homosexuality is a sin. And in England, the House of Lords passed the Gender Recognition bill last month, which makes it illegal for a clergyman to refuse to marry a homosexual couple claiming to be a man and a woman. And if a clergyman is under the impression he is marrying a man and woman, but finds out after the ceremony that the couple is really of the same sex, it is against the law for him to tell anyone. If he does, he faces a hefty fine.

You may think this will never happen in America, but if we continue down the destructive path towards redefining marriage, it won’t be long before our churches will be handcuffed and silenced….

So what can we, as individuals, do to counter this dangerous trend? There is currently a statewide petition to collect 400,000 signatures from registered Michigan voters to safeguard the traditional definition of marriage in our state. If we can reach this goal … the people—not politicians, judges or mayors—will decide how we as a society define marriage, and whether marriage, as we know it, will be redefined out of existence within the lifetime of our children and grandchildren.

Such is the request and the proposal. I reiterate, the amendment suggested is something that needs to get into various state constitutions these days. If we do not make it our business with others to get it there, the pro-gay crowd will get their abominations approved. And behind their move is the Evil One taking dead aim at the freedom of our pulpits, witness, and the right to teach our children what God’s Word teaches about sin. We must do what we can to keep that from happening as long as we can. Even if we fail, a witness must be made. Here is an opportunity. My judgment is that we as churches and Christian citizens must throw our weight behind this drive. It is not enough to let others fight this battle in the political arena for us. 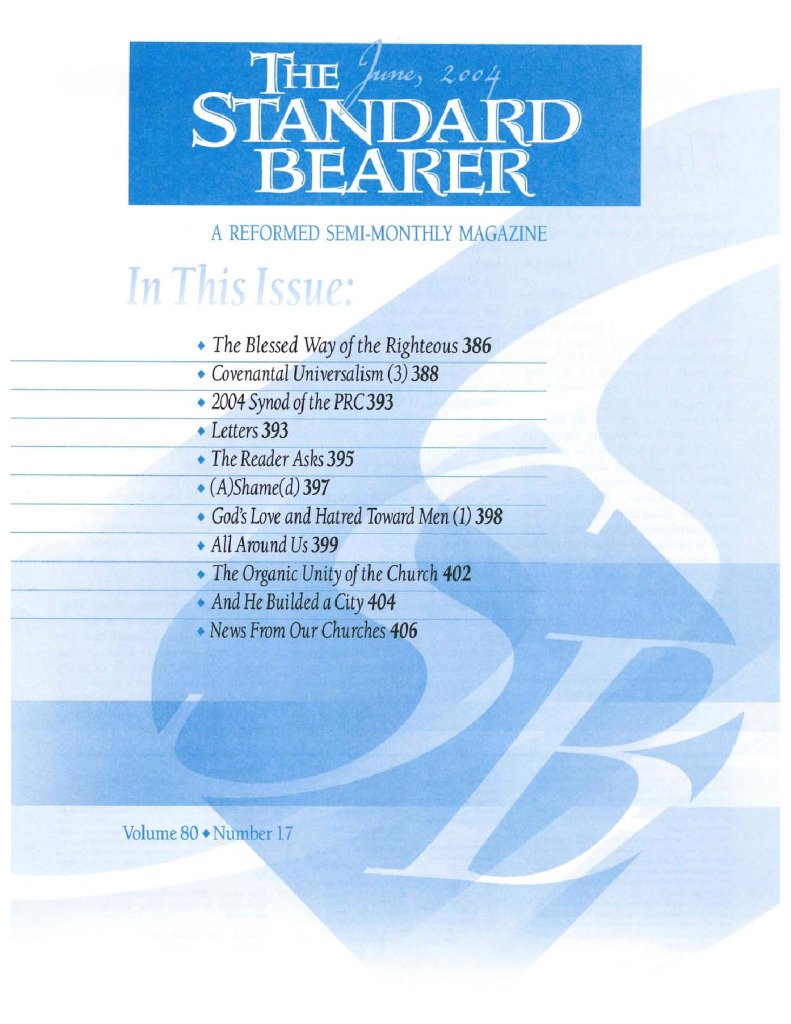