America’s newest Presbyterian denomination was born in a two-day convention here (St. Louis, MO.), as some 43 ministers and elders, both men and women, representing 15 churches, signed a covenant binding themselves to walk together as a church.

An equal, perhaps larger, number of representatives and churches stood by as observers, unable or unwilling for a variety of reasons to commit them selves in the organizational meeting of what will be called the Evangelical Presbyterian Church (EPC).

Leaders of the new church indicated that perhaps as many as 30 or 40 additional congregations have shown an interest in what was being done here.

Without exception, congregations of the EPC are former United Presbyterian (UPCUSA) churches that have lately withdrawn. While some have women on their governing sessions and others do not; and while some are frankly charismatic and others are not, all are committed to a central plank in the new church’s government: “constitutional freedom” in all these areas.

The steering committee chose not to recommend adoption of the Larger and Shorter Catechisms as part of the doctrinal package.

…Two major issues represent the unspoken concerns which led the group to believe a separate denomination would best meet their needs: the ordination of women and liberty in respect to gifts of the Holy Spirit.

While no more than two or three of the congregations have women elders and/or consider themselves charismatic, the freedom to make local determinations in these areas was a major concern.

The mood of the organizers would have to be described as more self-consciously evangelical than Re- formed, although all believe they stand in the mainstream of the historic Reformed tradition.

Evidence of the stronger evangelical orientation appeared in a number of forms. In the small-group discussions, Chapter 3 of the Westminster Confession, “Concerning God’s Eternal Decrees,” frankly raised a number of eyebrows.

Referring to the discussion in a brief devotional moment before the whole group, the Rev. Dean H. Wolf of the Faith Presbyterian Church, Aurora, Colo., said, “The Lord Jesus said little or nothing about the importance of predestination or of infant baptism, but He had much to say about the importance of a living relationship to Himself.”

Judging from the above report, one would conclude that there is not much hope of a denomination unified in the historical Reformed confession and faith. Surely “constitutional freedom” in the areas mentioned, can only lead to disaster. How can transfer of membership take place if one church maintains the right of women to serve in office, and another does not? What of the charismatic who transfers to a church which does not allow that in its fellowship? A new denomination which starts on this basis, can not long maintain even the semblance of a Reformed character.

Reports have been given in the secular and religious press about the possible founding of another seminary, probably to prepare men for the ministry in the Christian Reformed Church. The Calvinist Contact, April 24, 1981, writes:

A group of Christian Reformed Church members near Orange City, Iowa have purchased the former Harmony Youth Homes near that city with the intention of turning it into a Reformed seminary.

The home was owned by Bethany Christian Services, headquartered in Grand Rapids, MI and was sold to the Christian Reformed group on April 6….

There seems to be no connection between the proposed new seminary and nearby Dordt College in Sioux Center. At present the Christian Reformed Church has only one seminary, in Grand Rapids.

The same paper contains a “Viewpoint” about this which was written by Keith Knight:

Word is out that a new Reformed seminary is being established in Iowa, designed to provide an alternative to those who want to enter the ministry within the Christian Reformed Church.

It seems as though a group of ministers in Iowa mutually agreed that Calvin Seminary was not doing its job. That in itself is not improper. What seems hard for me to fathom is that these men have seen the need to create a brand new seminary with a faculty and facilities to attract students into the ministry.

The “orthodox” element within the Christian Reformed denomination need not create yet another seminary to train our young men. There are enough options as mentioned above.

The Iowa seminary plans to open up this September if my sources are correct. That means that it has four months to find faculty, establish a curriculum and, not unimportant, find students. It already has a faculty. Presumably those men who instigated this absurd proposal will volunteer their services for such a venture: people like John Piersma, Henry Vander Kam, Thomas Vanden Heuvel and others will be instrumental in getting the seminary off the ground. Its grassroots support seems shallow but it might attract one or two students.

Existing theological seminaries have established library facilities and a strong faculty. Their curricula are strong. It is simply beyond me that a group of well-intentioned individuals would try to create a new seminary with yet another emphasis.

One would have been more sympathetic to their cause if they had encouraged prospective students for the ministry to study at Westminster Seminary, for example. Their move is unnecessarily divisive and may be seen as another little step towards the breaking away of a small segment of the denomination. Such would be unfortunate. It would be more noble to attempt to (re)build from within the denomination than to forsake her and strike out on your own.

The above writer clearly indicates his opinion of this new venture. One can sympathize with the men who believe there is a crying need for a soundly (Christian) Reformed seminary. One will have to await further developments to see what will happen. All of this does seem to me to be too little too late. We’ll keep you posted.

The Mark of the Beast

The Seventh-Day Adventist paper, Liberty, Jan. 1981, presents some interesting comments on the development of the computer age and what this might have to do with the fulfillment of the prophecy of Scripture concerning the end of this age. Among other things, they write:

Evangelical Christians have seen prophetic implications in the development of computer technology. Their scenarios have ranged from the ridiculous-a “beast” computer and laser-beamed numbers inscribed in foreheads or hands—to the plausible.

At the root of their concern is a prophetic passage from the book of Revelation, which describes last-day church-state events:

“And he causeth all, both small and great, rich and poor, free and bond, to receive a mark in their right hand, or in their foreheads: and that no man might buy or sell, save he that had the mark, or the name of the beast, or the number of his name”

Author Arthur Miller, speculating on the use of the computer in commercial transactions, sketches a scenario in which

would seem to fit very well:

“Checks, and perhaps cash, will disappear someday, and all purchases will be made on universal credit cards. Each transaction will be electronically recorded in a computer network that will maintain a running account of everyone’s financial activities. The tax dodger will become a historical curiosity.”

The technology is available, if mankind chooses to use it. An eighty-nine page study prepared by James Rule was presented in September, 1975, to the Committee on the Right of Privacy, headed by then-vice-President Nelson Rockefeller. It told of both the beneficial and detrimental social impact of Electronic Funds Transfer (EFT), the system described by Miller, in which a person would have one computer account for all transactions. The study pointed out several situations made possible by such a system: a traffic offender delinquent in paying his ticket would not be able to make any more EFTs. And persons sought by the police could be coerced into surrender by not allowing them to make any business transactions.

Whatever one’s view of

it must be admitted that the evangelical scenario is even now technically feasible. Given zealous church and political leaders determined to utilize economic coercion against nonconformists (not so farfetched, when one considers the stated objectives of the lobbies seeking to make America a Christian republic), what today seems like science fiction may quickly become prophetic fulfillment.

It makes one think. What will take place the next few years? Indeed, Rev. 13 may be very near its fulfillment. 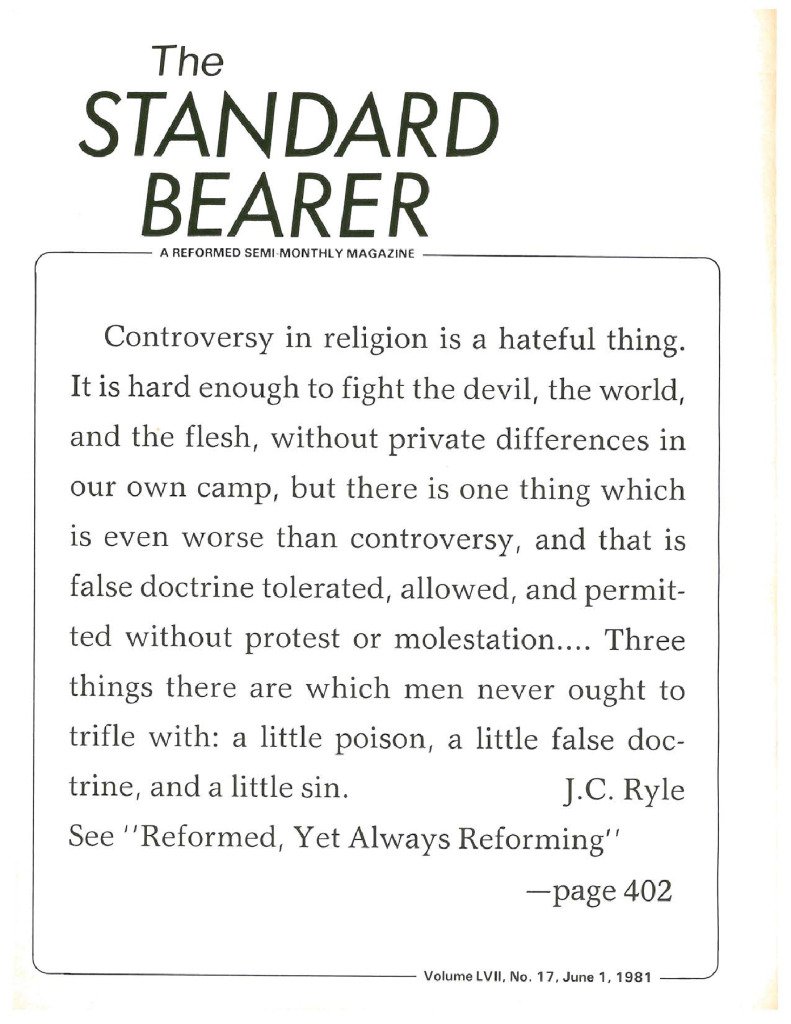