One of our younger readers called my attention to the cover story of Newsweek, August 25, 1997, which presented “The Meaning of Mary—A Struggle Over Her Role Grows Within the Church.” The article discusses at length the “growing movement in the Roman Catholic church (which) wants the pope to proclaim a new, controversial dogma: that Mary is a Co-Redeemer….” He thought it deserved some comment—and I agree.

The article reports on petitions within the Roman Catholic Church to have the pope declare Mary to be “Co-Redeemer.” In the last four years, the article states, the pope has received “4,340,429 signatures from 157 countries…. Among the notable supporters are Mother Teresa of Calcutta, nearly 500 bishops and 42 cardinals, including John O’Connor of New York, Joseph Glemp of Poland and half a dozen cardinals at the Vatican itself….” The article goes on to state:

If the drive succeeds, Catholics would be obliged as a matter of faith to accept three extraordinary doctrines: that Mary participates in the redemption achieved by her son, that all graces that flow from the suffering and death of Jesus Christ are granted only through Mary’s intercession with her son, and that all prayers and petitions from the faithful on earth must likewise flow through Mary, who then brings them to the attention of Jesus. This is what theologians call high Mariology, and it seems to contradict the basic New Testament belief that “there is one God and one mediator between God and man, Christ Jesus” (I Timothy 2:5). In place of the Holy Trinity, it would appear, there would be a kind of Holy Quartet, with Mary playing the multiple roles of daughter of the Father, mother of the Son and spouse of the Holy Spirit.

“Personally, I’m confident that there will be this recognition of Marian truth before the year 2000,” says Prof. Mark Miravalle, 39, the leader of the petition drive and a lay theologian at Franciscan University in Steubenville, Ohio. Miravalle has met with the pope several times and published three books since launching his bold initiative at a Marian conference in 1993. An infallible papal definition, he says, would put these doctrines “at the highest level of revealed truth.”

…In many ways, the 20th century has belonged to Mary. From almost every continent, visionaries have reported more than 400 “apparitions” of the Virgin—more than in the previous three centuries combined, Miravalle estimates. Taken together, these visions point to what the Marian movement believes is a millennial “Age of Mary,” which will produce a final dogma that confirms her ongoing maternal mediation between God and humankind….

…Not all of it, however, is driven by Marian apparitions. Feminists who 20 years ago dismissed Mary as the oppressive Virgin-Mother created by a clerical patriarchy now celebrate her as a “free woman” who chose to say yes to God at the Annunciation where Eve said “no” in the Garden of Eden—and thus made salvation history possible. Even liberation theologians have found in the humble Mary an apt symbol of God’s “preferential option for the poor.”

The secret of Mary’s mysterious power may be just this: having no history of her own, she entices every new generation to draw her portrait. The Bible offers only scraps to build on….

…From this meager line of development, Mary gradually grew in stature. Astonishingly, this obscure Jewish mother absorbed and transformed the most powerful pagan goddesses. She was the Madonna who gives life, but also the Pietà who receives the dead. Once asceticism became the privileged road to Christian holiness, she became the perpetual virgin,

the model of chastity and self-denial. In 431, the Council of Ephesus issued the first dogmatic statement on Mary: she was to be honored as Theotokos, the God-bearer or Mother of God. Thereafter, theologians were unceasing in their efforts to probe the mystery of her meaning within the fabric of the whole Bible….

…Since June there have been a number of conflicting commentaries on the proposed dogma published for the Vatican’s consumption. In one, French theologian René Laurentin, an internationally known specialist on Mary, strongly opposes the proposed dogma as un-Scriptural and an affront to the uniqueness of Christ’s redemptive death. All this suggests that there is a battle going on behind the scenes for the mind of the pope. But John Paul has a mind of his own. His devotion to Mary seems to have no limits. His papal motto, “Totus tuus,” means “All yours”—a reference to Mary. He firmly believes that it was the Virgin of Fatima who rescued him from a gunman’s bullet—and almost certain death—in 1981, on the feast of Our Lady of Fatima, as it turned out. He rarely delivers a homily or issues an encyclical without praising the Virgin Mary. He routinely uses words like Mediatrix, Advocate and occasionally even Co-Redemptrix. This year he concluded a series of 50 Wednesday-noon addresses on various aspects of Mariology, including one in May in which he went well beyond the silence of Scripture to claim that Mary was the first to experience the Risen Christ at Easter. It was, he said, only “fitting.”

I had contact with a Roman Catholic (“converted” from Protestantism) and I asked him about this article in Newsweek (and a similar one in Time magazine). His response is of interest:

In past correspondence I have tried my best to clear up any misunderstandings you may have regarding the Church’s Marian Doctrines. In my human weakness I may not have been very adequate but I will briefly touch upon this once more. From the tone of your last reply it seems as though you are more obsessed with the Church’s Marian Doctrines than I, and I’m the Catholic here. Please be aware that most who try to understand what the Church teaches do not begin with the Marian Doctrines. They begin with the Church itself, its history, why the Church claims to have the authority she has, etc. Once these are understood, everything else falls into place. As a convert, I can attest to the fact that the Marian Doctrines are probably the last, and most difficult to understand. In my last correspondence I brought to your attention former Protestant minister Marcus Grodi and his ministry “The Coming Home Network.” All these former Protestant ministers say the same thing about their journey to the Catholic Church. They will say it begins as a detective story, as they investigate the history of the Church, reading the early Church Fathers, etc. It very quickly becomes a horror story as they discover the claims made by the Church begin to make sense. But it ends as a love story as they complete their journey.

As for the writings of Ligouri, etc. why does the Church refer to Mary as Queen of heaven and earth, Ligouri in his writings as Queen of Hell and Sovereign Mistress of the devils? Why does the Catholic Church seem to elevate Mary to the level that it does? This may be best explained by looking at the historical and Old Testament background for it.

First of all I’m sure you would agree that Jesus is a king in the line of David. This can be proven from the genealogy at the beginning of Matthew’s Gospel. If you study the Davidic Dynasty of the Old Testament you will discover that all the kings in the line of David had a queen. But who was the queen? Was it his wife? No. It was always the queen mother. In all ancient monarchies it was the king’s mother who was elevated to the queenship. An example of this can be found in I Kings, chapters 1 and 2. In chapter 1, verse 10 we see the death of King David. The kingship is passed on to his son Solomon and in chapter 2, verse 19, we see Solomon elevate his mother Bathsheba to the queenship. We also see in these verses Bathsheba interceding with King Solomon on behalf of others. Now the question is, Did Jesus intend to abolish all the structure of the Old Testament or did he come to complete and fulfill it? The answer can be found in Matthew 5:17. Now if Jesus were truly a king in the line of David, it would be natural for him to elevate his mother to the queenship. This is the whole role of Mary in the Catholic Church. She is the Queen Mother and she intercedes for us.

Also briefly, in my last reply to you, I recommended that you get a copy of Dr. Mark Miravalle’s book, “Mary, Co-Redemptrix, Mediatrix, Advocate” to fully comprehend the dogma of Mary as Co-Redemptrix. Have you done so? Instead you read Time and Newsweek magazine’s explanation of this. …If you want to understand what the Catholic Church teaches, you won’t get it from Time and Newsweek. The secular press is continually distorting the teachings of the Church. If your car were in need of servicing or repair would you take it to your doctor? Or if you were ill would you seek assistance from your auto mechanic?

The correspondent’s appeal to the line of David and the “queen mother” in seeking to show the place of Mary in the work of her son, Jesus Christ, is absurd. First, where does this person read of the “queen mother” of David? Where does he read of all these other “queen mothers” besides Bathsheba? Did not the request of Bathsheba to Solomon on behalf of another represent a foolish intercession which led even to the destruction of the one for whom she interceded? What a poor example to support Mariology! The same correspondent insisted that “Co-Redeemer” and “Co-Mediatrix” simply means that Mary (and we too) stand with or alongside of Christ in support of His work of mediating with the Father. But the terms surely mean far more than that. Mary is presented as performing a part, however small, of the work of redeeming God’s people. It is surely a denial of the clear teachings of I Timothy 2:5, “There is one God and one mediator between God and man, Christ Jesus.”

Yet the stir about this proposed new and supposedly infallible doctrine concerning Mary is somewhat strange. Has not the Roman Catholic Church already denied the sole redemption through the blood of Jesus? It insists on works which man must perform to finish his salvation. Some, called “saints,” presumably do enough works to avoid purgatory. These can enter immediately into glory. Others must spend some time in purgatory so that they may be purged of remaining sins. Roman Catholics can intercede with “saints” so that these can assist them. To declare Mary to be “Co-Redeemer” would only compound the heresy already existent within the Roman Catholic Church. This would only further detract from the blessed gospel of salvation through the cross of Christ. This represents only one further evidence of the departure from the true gospel by the Romish Church. 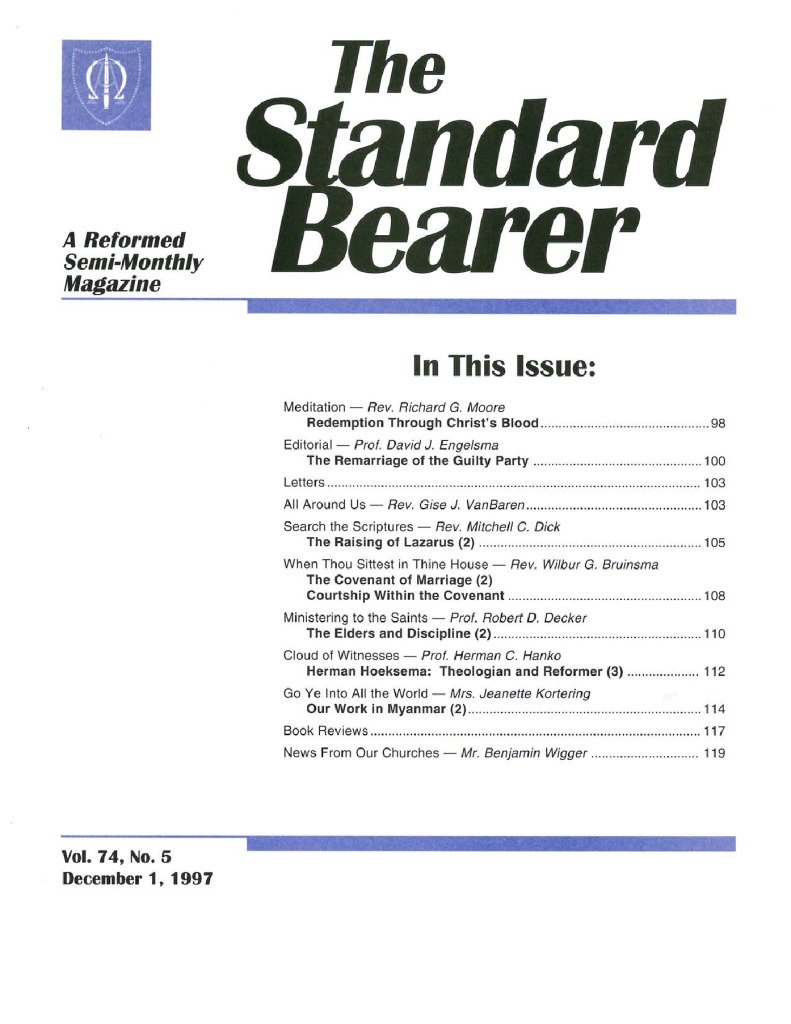