There was a time when the World Home Bible League was instrumental in placing Bibles in many places and distributing translations of the Bible throughout the world. Through their efforts the Bible was placed in the hands of countless people. This work was supported by many of our people and collections were taken for this work in many Reformed Churches. But this organization is no longer worthy of our support. I quote from a recent article in Calvinist Contact.

Churches in the United States and Canada are joining hands with the World Home Bible League in an effort to place a copy of Reach Out, the New Testament portion of The Living Bible, in every motel room on this continent, according to the Rev. John De Vries, international director of WHBL.

The project is about two years old at this point and has been set up in 32 states and three provinces. Of the 1,200,000 motel rooms in the United States, 200,000 have had Reach Out placed in them.

Paradoxically, the aim of the project is to have transients take the New Testament with them, and to encourage Bible reading in this way. One month this summer 100,000 copies of the modern English New Testaments were taken by tourists. Printed on most hotel Bibles are the words “Please Leave in Hotel Room.”

By the end of 1974, DeVries says the league plans to have contacted all the U.S. motels. An annual turnover of more than three million New Testaments is anticipated.

Inserts in each copy of Reach Out invite tourists to take the New Testament with them and to enroll in an interdenominational Bible correspondence course sent out from the local church which distributes the Bibles. Over 10,000 people enrolled in the Bible course in that month.

The World Home Bible League is an interdenominational Bible distribution agency with headquarters in South Holland, Ill. It was founded in 1928. Today its annual budget is more than three million dollars, and the league is working in 50 countries around the world.

The World Home Bible League, in cooperation with the New York Bible Society, is responsible for the publication of 95 per cent of the translations produced by Wycliffe Translators.

During the next five years the World Home Bible League is undertaking a campaign to bring a gospel portion to every literate person in India. The organization is a service agency which works through existing churches and mission points.

The trouble is that Reach Out is not the Scriptures. It is a bad paraphrase of the Word of God which distorts and corrupts the Scriptures and alters the meaning of the Scriptures at many key doctrinal points. It is nothing less than a work of Satan. And it is a very clever work at that. It leaves people with the impression that they have in Reach Out the very Word of God when, as a matter of fact, they have the words of men and a corruption of God’s Word. It gives a sense of piety to those who use it when as a matter of fact they cannot learn from it what God has revealed. It destroys by a clever device of Satan.

The World Home Bible League ought not to distribute this book. But as long as they do, God’s people cannot support their labors.

Trouble In The Armstrong Empire

The Armstrong Empire is in serious trouble. Herbert W. Armstrong and his son Garner Ted are the leaders of what has become known as the World Wide Church of God. They have built a large and wealthy empire which includes an international radio and television network over which their views are propagated, two colleges in California and England with a branch in Texas, the publication of slick magazines and pamphlets which have a world-wide subscription list, and countless enterprises of one sort or another.

They are a sect which denies many of the fundamental doctrines of the Scriptures and maintains a salvation by works, a Saturday Sabbath, a British-Israeli view of history, and a post-millennial view of the kingdom.

The trouble started when Garner Ted was temporarily suspended from the work last year for alleged adultery. Since then a large number of ministers and people have broken away from the sect. They charge the sect with many faults. They charge that Herbert Armstrong, the leader of the sect, is an autocrat in doctrine and will allow not even the slightest deviation from his personal position. They charge that huge amounts of money are squandered by the leaders who live sumptuous lives, fly all over the world in privately owned jets, use the money donated by tithing for their own personal fortunes.

It is not surprising that such troubles should beset the empire. The movement is, after all, a sect. And there is no other explanation for a sect than that some charismatic leader leads thousands down the trail of his own imaginary doctrines and bilks thousands of their money for purposes of personal gain. It is in the nature of a sect to be this way, for there can be no devotion to God and to His truth.

We have reported in these columns from time to time the troubles which have engulfed the Lutheran Church — Missouri Synod. These troubles center about a battle between liberals who deny the infallibility of Scripture and introduce higher critical methods of Scriptural interpretation into the Church and the conservatives who desire to remain faithful to the creeds of the Lutheran Church.

The controversy reached a climax of sorts last summer in New Orleans where the annual convention produced a major victory for the conservatives. Dr. Preus, the president of the Synod, has now made it his business first of all to settle the problems in Concordia Seminary in St. Louis which is, in a sense, the center of liberal theology. The president of the Seminary, Dr. John Tietjen, has been dismissed as a first step in “cleaning house”. It is this dismissal which has sparked the latest conflagration and has brought the church to the brink of a split. Nearly all the faculty, some 48 professors, and nearly all the student body, some 500 students, support Tietjen and have boycotted the Seminary. The school has since been reopened with a sharply reduced faculty and student body, but the protesting professors and students have opened a Seminary in exile on the campuses of two near-by institutions: The Jesuits’ University of St. Louis and the United Church of Christ’s Eden Theological Seminary. Both schools will grant theological degrees to the Lutheran students. The professors and students call their seminary “Seminex” (Seminary-in-exile), while the conservatives call it “Seminop” (Seminary-in-opposition).

The burning question is now whether these students who graduate from the Seminary in exile will be eligible for pastorates in the Missouri Synod churches.

In the November 6 issue of the “R.E.S. Newsletter” an article appeared in which the views of Dr. H. Berkhof concerning the person and natures of Christ were discussed. We quote the article.

(Grand Rapids) Dr. H. Berkof set the theme for the European Area Council of World Alliance of Reformed Churches by raising once again Christ’s challenge: “Who do you say that I am?” He emphasized the need to express the uniqueness of Jesus and His resurrection in contemporary terms. We create unnecessary offence by continuing to formulate our confession in terms drawn from Greek/Hellenistic thought. Dr. Berkhof especially focused his criticism on the Chalcedon Creed (451 A.D.). The terms used there were drawn from a philosophical climate that was above all interested in the being of things. Nowadays we think in terms of ‘function’. We do not ask what something IS, but what it DOES. What does Jesus as liberator do in our world?

To this end, Dr. Berkhof emphasized the modalities of service, powerless, and suffering as the way in which God is involved in this sinful world. Berkhof’s personal answer to the question posed by Jesus was: “you are the true man, as God intended man to be from the beginning; the true obedient Son the Man of Love, the one who was willing, taking the full consequences, not to maintain his life, but to lose it for others, and who by that exceptional life of love and obedience started in our world the counter movement of resurrection.

Dr. Berkhof’s address aroused extensive comment, especially (in the) Gereformeerd Weekblab, a church periodical in the Netherlands. Both Klaas Runia and J. Helderman took issue with the way Dr. Berkhof played off function over against being or essence. Nor did they think it fair to reduce the statements of Chalcedon regarding Christ’s nature (true God and true man; tow natures in one Person) to the terms in which they were framed. Conceding that the terms of Chalcedon are by no means sacred, Runia persists in asking whether Berkhof’s “function” answer preserves adequately the confession of Christ’s deity. Runia detects an emphasis on the Jesus of the Gospel’s at the cost of the apostolic witness concerning Him. This results in losing sight of what theologians have called the pre-existence of Jesus. How does the new of Jesus as the eternal Son of God who became man for our sake fit in to the new Christology.

Klass Runia discusses this whole problem in an article which appeared in Christianity Today. We shall have to wait till our next issue to discuss this matter further. 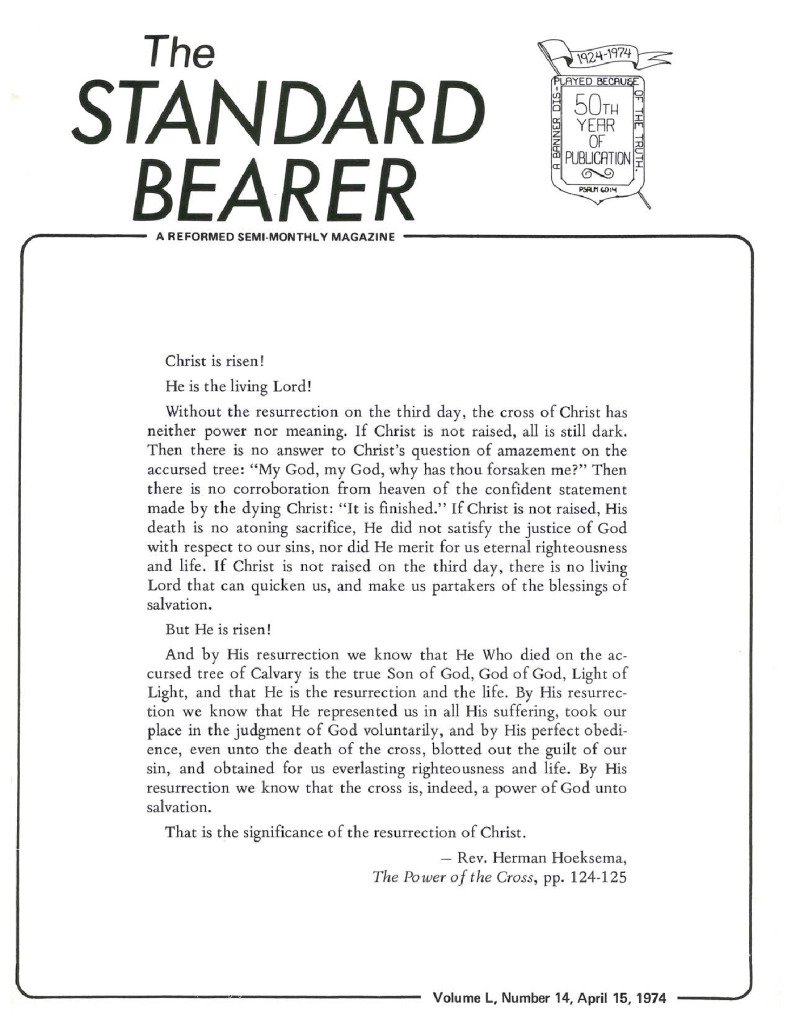