The ACL and the Athanasian Creed

Christian News, a conservative Lutheran periodical, presents reports concerning the state of affairs within the Lutheran community. In its issue of Feb. 7, 1977, it presents evidence that the American Lutheran Church no longer defends the Athanasian Creed. It presents the shocking fact that within major denominations the basics of Christianity are being denied. The report states:

While the Lutheran Church-Missouri Synod has in recent years repeatedly said that Jesus Christ is the only way to heaven and that those who die without a saving knowledge of Christ are lost, the American Lutheran Church no longer accepts this scriptural position. It allows its clergymen to reject the Athanasian Creed.

“Judaism” is the theme of the Winter; 1977 DIALOG, a Lutheran journal of theology.

DIALOG has published articles and editorials questioning such basic Christian doctrines as the physical resurrection of Christ and Christ’s virgin birth.

None of the articles on Judaism in the Winter, 1977 DIALOG maintain that Christianity is the only saving faith and Jesus Christ the only way to heaven. DIALOG advances the anti-scriptural notion that Jews can be saved without confessing Christ as their Savior from sin.

Professor Harold H. Ditmanson of St. Olaf College is the author of one of the articles in DIALOG titled “Judaism and Christianity: A Theology of Co-Existence.” Ditmanson, after describing the orthodox Christian approach to Judaism which maintains that “Jews should become Christians,” writes: “It is a matter of debate whether or not this traditional description of the relationship between Judaism and Christianity can be found in the New Testament. But there can be no doubt that it took shape in the very early centuries of the church. By the end of the third century, the Jew was seen by Christians in general as an unbeliever.”

Professor Ditmanson, an American Lutheran Church clergyman, says that “Christian attitudes toward Jews are surely negative if Jews are seen as unbelievers, targets of conversion.”

Ditmanson maintains the. Jews believe in the same God Christians accept. He writes in DIALOG: “Christians who take seriously the disavowal of the curse have already begun to entertain the conviction, at least by implication, that Judaism lives not because of stubbornness or demonic influences, but by God’s design. The vitality of Judaism is a sign of faithfulness, not blindness. The millions of Jews who have suffered and died for their faith have paid the price of obedience, not disobedience. N this is true, it follows that Judaism has a witness that God wants it to bear. Thus God does not want a world without Jews. If Jews have such a witness to bear, then Christians need Judaism and can learn from it something about their own faith. Hostility, then, is impossible, as is any imperialism or condescension in approach. . . .”

IRS and tax exemption for churches

There has been repeated, and often justified, complaint against tax-exemption of church properties. The arguments, pro and con, I will not now present. There are reports, however, that the government is attempting to crack down on this area of tax loopholes. Perhaps one might be inclined to say that it is about time. There are churches that hold extensive real estate properties which involve no function for the church except to earn it tax-free monies. However, as soon as the IRS or the government begins to define, what is a church and what is proper church activities, the possibility is that the faithful church will be affected. Can government properly define what is legitimate church? Can it limit what it considers proper church activities? Will not such decisions on tax exemption, though apparently so necessary because of widespread abuses, be used to regulate and perhaps limit the proper work of the church? Some of these concerns are expressed in the Presbyterian Journal, Jan. 26, 1977:

The U.S. Internal Revenue Service (IRS) has issued a new order, which has the effect of law, defining which “auxiliaries” of a denomination are to be considered tax-exempt.

Religious leaders reacted immediately because the new order could affect the tax-exempt status of some Church agencies. James E. Wood Jr., executive director of the Joint Baptist Committee on Public Affairs, said: “If the Churches accept this new IRS rule, it would be tantamount to their acceptance of the authority of the government to define the role and mission of the Churches.”

Mr. Wood continued, “Under the Constitution, each Church is the sole source of the definition of its mission and the Church alone is capable of determining those auxiliaries which are integral to and integrated into that mission.”

In the Jan. 4 Federal Register, the IRS published a final official ruling amending the Income Tax Regulations of the Internal Revenue Code, Section 6033, by defining an “integrated auxiliary of a Church.” Items published in the Federal Register, such as this new IRS rule and presidential executive orders, carry the authority of law, although not subject to approval by any legislative body.

Some observers feel that the new rule could affect tax exemptions of Christian Schools, day care centers, charitable agencies and other related church organizations. If it should not affect exemption, it could bring on excessive amounts of paper work.

Increasingly, cries are raised against that horror in our land, abortion. It is murder on a grand scale—over a million a year. To spend money to find cures for cancer, to pass laws to reduce, hopefully, the more than 50,000 deaths on our highways—appears to be utter foolishness in light of the wanton destruction of over a million lives annually through abortion. The Christian News, Jan. 31, 1977, reports on some of the action taken against this terrible sin:

While President Carter was holding a reception in the White House for the diplomatic corps, a “pro-life” rally—the first major all-day demonstration of his administration—was held on the Ellipse, across the street from the executive Mansion.

It was the fourth annual March for Life, held Jan. 22 on the anniversary of the U.S. Supreme Court decision in 1973 which greatly liberalized state abortion laws proscribing abortions. The marchers came from many states to register their protest.

The official metropolitan police estimate of the number of persons who marched down Pennsylvania Avenue from the Capitol to the Ellipse was 40,000.

There are many, of course, who are “pro-life” for reasons other than what God has given in His Word. For that reason, too, one finds it difficult and usually impossible to cooperate with “pro-life” movements. But the horror of this terrible crime ought to be impressed on us. We condemn Germany for killing millions of Jews and others who opposed their regime during and before the last World War. We condemn those in Germany who silently acquiesced to these brutal murders. Yet, is there basically any difference between what was done then—and what is being done now? Then, the “worthy” purpose was to eradicate the hated Jews—now the “worthy” purpose is to eradicate unwanted babies and prevent overpopulation on this earth. The scenery is a bit different (hospitals and clinics instead of gas chambers); the goals are a bit different (eradicate babies instead of Jews); but the method is the same: kill these human beings. God’s law is being willfully violated by those who know well what that law is.

The child of God believes the Word of God by faith. Yet one finds it to be of interest when worldly scholars discover evidence that what the Bible says is true. A report in the Los Angeles Herald-Examiner, Nov. 6, 1976, as reported in Christian News, states the following:

The recent discovery of the ancient civilization at Tell Mardikh in Syria has rocked the scientific community—penetrating deeply into biblical scholarship.

Many scholars now agree that the data found at this site explodes the waning view, popular in the 19th and early 20th centuries, that Israel’s religion was evolutionary in nature. Too, it shows that the early books of the Bible were not mythological “spiritual lessons”—fabrications written at a later date and lacking historical accuracy.

On the some 20,000 clay tablets discovered, dated at 2,500 B.C., approximately 230 places and personal names have been identified. Up until now a good many of the names hadn’t turned up anywhere except in the Bible, leading many scholars to believe them fictional. The consideration cannot now be ignored that these are “real” places and “real” names, put into the time framework of traditional Scripture structure.

In regard to the tablet discovery, Dr. David Noel Freedman of the Religious Studies Department, University of Michigan, and editor of the Bulletin of the American Schools of Oriental Research, said:

“This is the best information we have so far about ancient civilization and there is an added point for those interested in the Bible. We’re all in for a real shakeup in liberal scholarship.”

The article continues by pointing out how that this recent discovery identifies many of the historical names and places in the Bible. The Christian needs not this sort of evidence to convince him concerning our Bible, but such discoveries are of interest because they show how wrong great scholars of the past were. The discoveries show not so much the truthfulness of Scripture, but the fallibility of man and his theories.

When is a “dance” not a “dance”? When it is held at Calvin College. Then it is a “party-with-music.” One wonders: Are they ashamed of their “Calvinism”? Or are they embarrassed about their “worldliness”? Or is it an attempt to hide something from someone?

A favorable review of Prof. H. Hanko’s book The Mysteries of the Kingdom is given in the Banner, Feb. 11, 1977. It concludes: “We trust that the book will be given a wide circulation. May it be a useful instrument as God’s kingdom is extended in our world through the power of His Word and Spirit.” And it’s an occasion to ask ourselves: “Have we added this book to our libraries yet?” 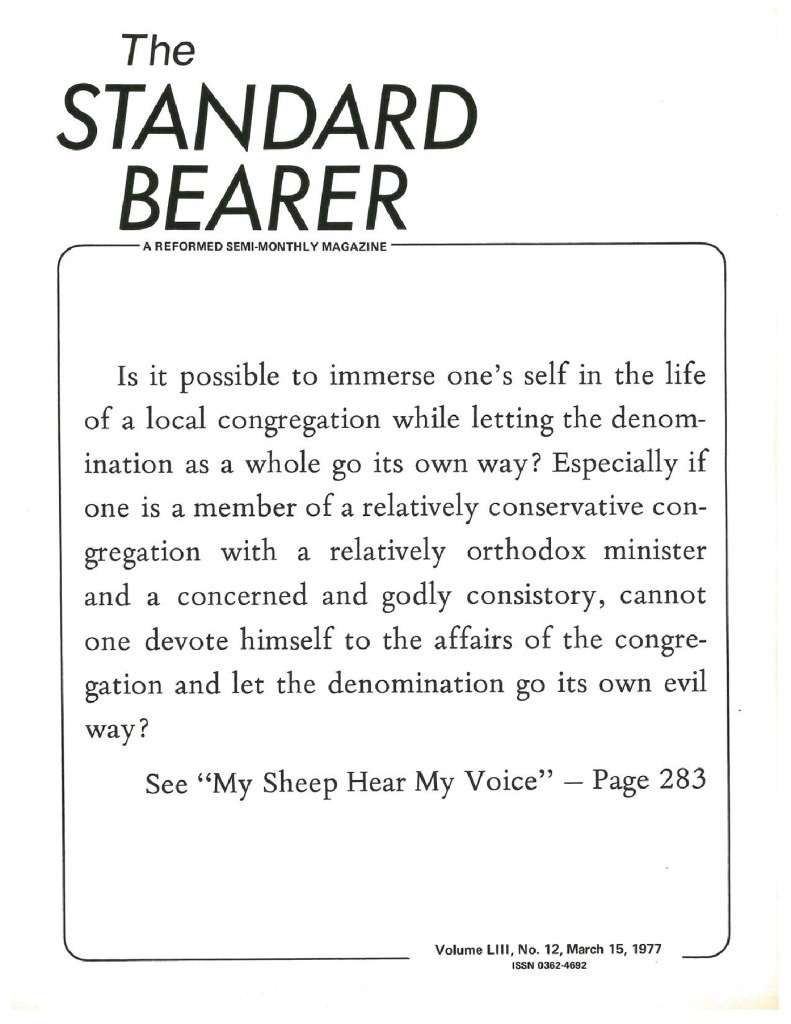