The Christian News, April 15, 1985, reports on a debate in England within the Church of England in which one of its Bishops, Right Rev. David Jenkins, allegedly casts doubt on the resurrection of Christ from the dead. The article states:

Bishop Wood, . . . an evangelical, says he believes his brother bishop to be a hind and academic man, “but, nevertheless, I believe he should not be a bishop in the Church of England.”

He says Bishop Jenkins should return to his academic life unless he could preach unreservedly this Eastertide that Christ was raised from the dead.

. . . Bishop Jenkins says in the newsletter that the question of whether the Easter tomb was empty or not does not prove or disprove the resurrection. He writes: “The evidence of the texts, the nature of tradition, and the general facts about the way people all over the world rapidly believe appropriate stories to support their religious beliefs leave me wholly uncertain about the empty tomb as literal historic fact.”

In the place of this uncertainty, Bishop Jenkins insists on the importance of “the encounters of faith, the assurance of faith, and the practice of faith. This faith claims that the resurrection of Jesus Christ from the dead is so real that it changes our approach to all reality. This faith I wholly share.”

Interesting that a man could question the literal, historical fact of the empty tomb, yet claim that the “resurrection of Jesus Christ from the dead is so real that it changes our approach to all reality.” This all sounds like the cry of the heretic who would deny fundamental truths of Scripture, yet use terminology which tends to confuse the undiscerning. Nor is it so strange that one teaches as does the above-named Bishop when so many want to deny the literal accounts found in Scripture. Usually there is first a denial of the literal account of Genesis 1-3; then a denial of the miracles and certain historical accounts, then a denial of Christ’s resurrection and ascension. One can not tamper with parts of Scripture without such tampering eventually affecting the whole of his understanding of Scripture.

Some of our readers may remember that 22 years ago there began a movement among several Protestant denominations toward organic union. What began with great fanfare soon seemed to flounder. But the movement (COCU) did not cease to exist. Recent reports indicate that the movement is alive and well. The Christian News, December 10, 1984, reports:

A major step toward ending the historic divisions within American Protestantism was taken here Nov. 30 by representatives of nine denominations that have a combined membership of 23 million.

Delegates from the nine groups voted unanimously to ask their denomination’s highest decision-making bodies to accept a 70-page theological “consensus” document as the basis for the next actions the churches will take toward “organic church union.”

. . . The consultation, whose headquarters is in Princeton, N.J., has a very small staff, said Dr. Moede. “As of now, the super church has only a six-person curia,” he quipped.

He and other ecumenists, however, stressed that the envisioned union would not create a church of uniformity, but would preserve many diversities of tradition, worship style, and practice that denominations currently cherish.

What are the specifics? This weeks meeting will approve the document, “In Quest of a Church Uniting,” the first drafts of which have already been approved by the Episcopal Church. This document provides that everyone’ in the new “church” will agree to the truth of the others’ creeds and confessions. This sanction of relativism means that even if two of COCU’s members have beliefs which are contrary one to the other, everyone will agree that both beliefs are true.

. . . Then, prior to any statement of formal merger, the members of COCU will recognize each other’s members, ministers and sacraments, providing for sharing of clergy, free exchange of members and sharing in eucharistic fellowship. With the new membership canon going into effect in 1986 in the Episcopal Church and the current practice of eucharistic fellowship with the Lutherans, the Episcopal Church has already entered upon the COCU way . . . .

All the above mentioned actions are provided for in the “Quest” document which is to get its final approval in Baltimore this week. Provided for in other documents also slated for approval are “councils of oversight” empowered to ordain clergy for all the churches, and joint baptisms and confirmations. Members of the councils will be bishops and “bishop-type” leaders from the denominations as well as “presbyters” which term now comes to mean any minister and not just priests . . . .

So the effort towards organic union between the various denominations continues. Opposition to such union is heard, but the pressure to unite is great. It might well be that this effort will succeed—especially since several of the denominations involved are themselves the fruit of earlier mergers. But is this not a reminder of the nearness of the church of the antichrist? What else could be said of an organization which can hold as equally true the conflicting views of the uniting churches?

Should the Dance Be Part of Church Liturgy?

The Outlook, June 1985, presents a report of matters coming before the Synod of the Christian Reformed Church this summer including a proposal to introduce “liturgical dancing.” By the time this article is printed, a decision on this question will already have been taken. I dare not guess the outcome of this proposal. The writer in the Outlook, Rev. Peter DeJong, rightly expresses his strong revulsion for the entire proposal. He writes:

The perhaps last report of the Liturgical Committee . . . is devoted to defending and promoting the liturgical dance in view of the fact that the committee believes that some churches are now “ready” for it. It traces the past discussions and decisions about dancing, and by a survey of history, studied manipulation of the rather scanty Biblical references (to children’s games and David s “dancing, ” for example), citing of unspecified cultural changes and appeal to a few academic specialists, seeks to rationalize now making liturgical dancing a feature of congregational worship! It tries to make its radical proposals more acceptable with a number of pious qualifications: The dancing must be “an act of worship,” not “some form of entertainment” and must only “be done in an edifying manner.” “The committee would regret it if the synod’s decision should result in serious division among us. Yet the development of liturgy cannot be frozen at a certain moment.”

It is curious that at the time when more of our churches than ever before are showing that their confidence in the denominational leadership has been rudely shaken, this proposal should arise to further demolish that confidence. If any people had illusions about the propriety and spiritual sensitivity of some of our more recent liturgical innovations, this final proposal of the committee should help to disillusion them. The committee’s rationalizations somewhat resemble those of Aaron when he attempted to justify his concessions to the Egyptian calf-style of worship at Sinai with the announcement, “Tomorrow is a feast to the Lord” (Ex. 325). He forgot, as our committee and church forget, that God was not merely concerned about Whom we worship, but also how we worship Him. The first commandment is followed by a second which warns of His “jealousy” about that point. As our increasingly forgotten catechism points out, this commandment clearly teaches that we are not to worship God “in any other way than He has commanded in His Word” and that “He wants His people in instructed by the living preaching of His Word,” rather than by visual imagery. Perhaps few if any things in the agenda, document more clearly than this committee proposal our current departures from this guide.

Meanwhile, in other papers the liturgical dance is being encouraged and guidelines already set forth. In Calvinist Contact, May 31, 1985, we read:

In much the same vein, whatever type of liturgical dancing is done, it must never be a performance or entertainment. This is very important! The dancing is done for Gods glory, not the dancer’s glory or the congregation’s glory . . . . Always, the dance, music, poem, play, banner or song must support the theme of the worship service and stress it rather than stand proudly on its own. The whole point of calling it liturgical dance is to emphasize that the dance must fit into the unity of the worship liturgy . . . .

Some suggestions on how liturgical dance could be implemented in a church . . . . Talking back and forth and giving people a chance to learn about liturgical dancing before it is brought into their services can take away much of the threat that people feel by having dance in the church.

How soon is forgotten that important and moving cry of the Apostle Paul, “For I determined not to know anything among you, save Jesus Christ, and him crucified” (I Cor. 2:2). His admonition to another group of churches surely applies too: “I marvel that ye are so soon removed from him that called you into the grace of Christ unto another gospel: which is not another; but there be some that trouble you, and would pervert the gospel of Christ” (Gal. 1:6-9). 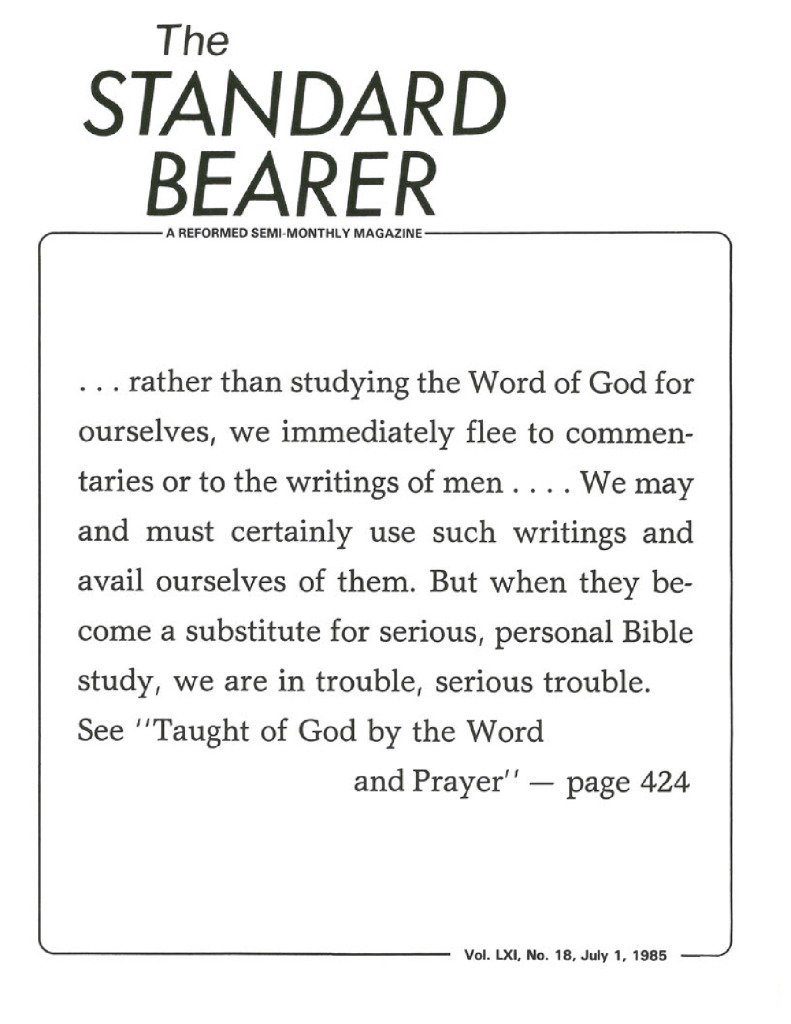