God’s Wisdom and the Impaired (or: Living in Gratitude While Raising Children with Genetic Anomalies)

Every now and then one comes across a book that demands attention. One such book is Genetic Ethics: Do the Ends Justify the Genes? This is a book which, because of its relevance to the issue of the day, genetic cloning, deserves a wider reading. The book consists of twenty-three articles, each written by a different author trying to bring his or her Christianity to bear on some facet of the controversy swirling around genetic research and its aims. This is an area about which we must be informed. The practical and ethical questions that loom here reach into every facet of modern life. This book provides a beginning in educating oneself in the issues involved. It is published by Eerd-mans at a very reasonable price. (I assured my wife that they were almost giving it away.)

There is one article in particular that caught my attention, Chapter 3, entitled “God’s Sovereignty and Genetic Anomalies.” This chapter in itself is worth the priceof the book. What the writer says about God’s sovereignty as it affects our lives is solid. How he brings it to bear on the matter of “genetic anomalies” (i.e., genetic disorders that result in impairments, often of the severest sort) is moving and full of insight. The author himself is the father of a severely impaired child.

My eldest daughter, now 14, was born with a genetic anomaly termed 8p +. She is profoundly disabled and will require lifelong care. Her condition is so rare that we do not even know what her life expectancy is. Though life with our daughter has been extremely difficult (and expensive) at times, we have learned important lessons about life and the value of life from her (p. 53).

What is the value of such a God-given child? It is exactly such a child that those enamored with genetic manipulation seek to prevent. Their perspective is, having the basic knowledge of the human genome, we must now vigorously pursue the technology necessary to protect individuals from having to suffer such things, no matter what the cost. The author, a believer who can speak from firsthand experience, full of compassion for the daughter God gave to him and his wife, begs to differ. Having stated that “the comfort is that when we embrace the truth that God will glorify himself through everything that happens, we know that in the providence of God nothing is lost or in vain,” the writer goes on to say:

Nothing we experience is meaningless; everything is significant, the bitter and sweet. We may not be able to say at the time of the death of loved ones that their death glorifies God. However, we can rest absolutely certain that such things are not mistakes nor do they happen by chance. We can also be certain that even such awful things will glorify God, because he has said so, and he keeps his promise.

Second, God creates some people with genetic anomalies not only for the sake of his glory, but also to show us our own brokenness and our need of his grace. The disabled among us, whether genetically disabled or otherwise, remind us of our own inherent disabilities. When we see them with their limitations, we can begin to see ourselves in a new, more honest manner as broken men and women before God in need of redemption, body and soul….

We recently received a letter from a friend that captures well this idea of seeing our own brokenness in those with genetic disabilities. In the course of her letter, Nancy Jensen writes the following:

“As a daughter of the King, I am of worth beyond my capacity to perform. I am measured in worth by God’s love for me, not by my love toward Him. There is nothing I could perform that would fill a service to Him, nothing. Yet He loves me….

“Then I thought of Jessica. She is loved by our family and given a worth beyond her capacity to perform. Her place in your home is ensured by your love for her, not by her ability to be loving, or helpful, or to achieve anything. I realized with humility that I am just like her in God’s family, only far more handicapped. In the spiritual realm, I can’t move right—much less walk or anything wonderful, can’t feed myself or dress myself…. And I don’t even see how handicapped I am, thinking I’m fine and strong and competent. Still, God loves me, His crippled child, His own chosen special treasure. Just like you two have built your house to accommodate Jessica’s needs so God has ordered all of creation and redemption to accommodate us.

“So the Lord used your precious Jessica to show me who I really am to Him. It’s humbling, true, but still a great comfort, because it’s right” (pp. 53-54).

Continuing on, the author points out:

Healthy “normal” people (one author has insightfully referred to this broad class of people as “the temporarily able-bodies”) tend to avoid people with disabilities and to feel uncomfortable around them when avoidance is not possible. This reaction is due primarily to the hubris of our day that sees ourselves as beautiful, whole, perfect people. When we encounter someone who is broken in body, it reminds us that we are much more like this disabled person than we would like to admit. Our differences are not differences of kind, only differences of degree. Such a realization humbles us, and humility is not a virtue cultivated in the contemporary western world. As one writer recently put it, “Humility has a dank and shameful smell to the worldly, the scent of failure, lowliness, and obscurity.”

Third, God creates some people with genetic anomalies not only for his own glory and to show us our own brokenness, but also because such disabled people present the church with the gift of allowing followers of Christ to serve them unconditionally, without expectation of receiving back. In this way they help us to mirror God and to experience forgiving grace to another as God does to us (p. 54).

Yes, a rather long quote. Strictly speaking, the question could be raised, I suppose, whether this all fits under the rubric “All Around Us.” Just keep in mind that families with children impaired by genetic disorders are all around us, fellow saints bound to children with severe disabilities making great demands on their energy and time. These are the children whom genetic testing could diagnose in the womb, and whose parents would be advised to terminate their life. These are the children that those promoting genetic experimentation and engineering want to prevent or deliver us from. Such children are a great burden. What can be the good of such?

To this Mr. Michael S. Beates gives an eloquent answer.

When we are faced with excruciatingly painful life situations brought on by genetic anomalies, we ask (and rightfully so), “If this is from God, how can this be good?”

But if such hardship causes the believer to long more deeply for God’s presence and to look forward to his making all things new, then it has meaning and purpose. If such trials beckon followers of Christ to love the Lord our God rather than this world, then he is glorified in such circumstances (p. 55).

Now, for the sake of argument, let us suppose that man by genetic engineering, after who knows how many failures and experiments gone awry (because it will take that, be assured), at last breaks through the barriers and is able to deliver society from all sorts of impaired and diseased children. In light of the above, what are we going to gain? There is nothing to lose? Really? Perhaps we ought to read the above quotes once again.

And, should science ever cross the threshold and be able to alter genetically the fetus in the womb to prevent impairment after impairment, do you seriously think they will allow a couple the choice of bringing such children into the world? The Insurance Companies? You know, the “good hands” people? You think they are going to bear such costs? Well, then I have a bridge in Brooklyn I would like to sell you. You can contact me at…. But read the book for yourself.

You know the approach. If one phrase sets off alarms and causes bells to ring, say it in another way. Use euphemisms. You may be able to sell it to the public that way. “Cloning,” even when described as “therapeutic,” is a word that sets off such alarms. So what to do? Cal Thomas, in World Magazine (Feb. 2, p. 29), alerts us that they are up to their old games again (“they” referring to the National Academy of Sciences or NAS). As Thomas points out, the NAS wants the government to outlaw reproductive cloning — for now. Thomas goes on to say:

How appropriate in the 29th anniversary month of Roe vs. Wade, which effectively declassified human beings as unique compared to other living things, that an influential scientific body should take one more step away from a model of humanity based on intrinsic value and toward a utilitarian model which says that humans, like everything else, have only the value assigned them by society.

The language used by the NAS in a report released on Jan. 18 reveals the group’s moral emptiness. Cloning for research is referred to not as “therapeutic cloning” but “nuclear transplantation to produce stem cells” (sic!—KK). Perhaps “cloning” was not testing well in focus groups, so advocates had to come up with more acceptable words. This is nothing new. The Third Reich employed euphemisms to anesthetize any latent German moral consciousness. “Transportation Company for the Sick” was a sign placed on trucks that rolled through German streets carrying human cargo to their final earthly destinations. America long ago moved from “abortion” to “pregnancy termination.” It sounds nicer.

Be on the lookout. “Nuclear transplantation to produce stem cells”? Just another way for talking about cloning human cells for research. As Thomas astutely points out, in our day and age, “One’s comfort level is now the standard by which people determine moral truth. ‘If it feels good, do it’ was unsophisticated and sounded self-centered. ‘Nuclear transplantation’ sounds scientific, trendy, even ennobling.”

So another phrase is born to deceive twenty-first century society, which, sad to say, much like German society of Hitler’s day, really does not care to know exactly what is going on anyway. This way we can sleep better. 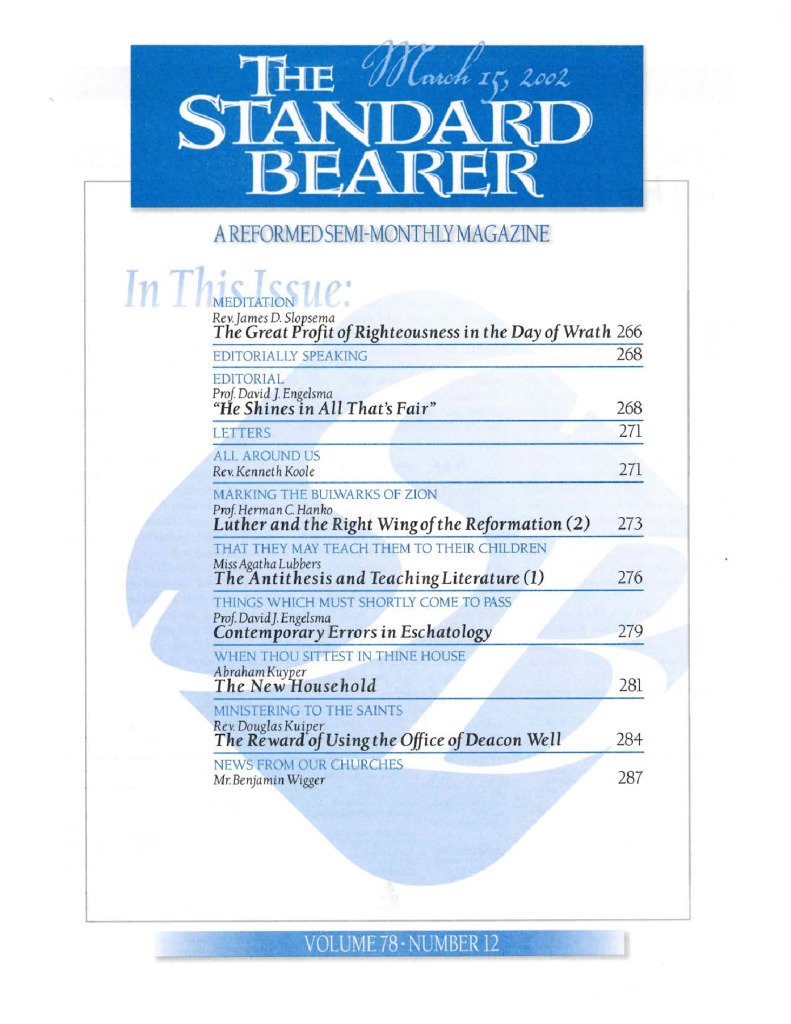