DECISIONS OF THE GEREFORMEERDE KERKEN

At its latest session of the General Synod the Reformed Churches in the Netherlands (Gereformeerde Kerken) took some important decisions affecting the future of that denomination and perhaps of other Reformed Church bodies.

The first of these was a decision to join the World Council of Churches (W.C.C.). We quote from theR.E.S. News Exchange.

(Utrecht) In an almost unanimous decision, the General Synod of the Reformed Churches in the Netherlands decided to join the World Council of Churches. Dr. Eugene Canon (should be Carson, H.H.) Blake, in replying to the telegram in which the decision was communicated to the World Council, expressed his satisfaction with the decision and observed that the Reformed churches in the Netherlands had for many years cooperated already in WCC activities and that their work was greatly appreciated. Many members of the Synod expressed the opinion that membership in the WCC may not mean that the tie with the Reformed sister churches in the world, which are not members of the WCC, will be weakened. Relations with these churches, they said, should be maintained.

Dr. P.G. Kunst, president of the The Synod will establish guide lines for those who will represent the church in the WCC. The request was made that an extensive explanation be sent to the Reformed sister churches which are critical of the World Council of Churches.

The Synod will establish guide lines for those who will represent the church in the WCC. The request was made that an extensive explanation be sent to the Reformed sister churches which are critical of the World Council of Churches.

In a way this decision was inevitable. The Gereformeerde Kerken had already decided that there was no obstacle to membership in the W.C.C. They had only waited with implementing the decision by actually joining to seek the opinion of their sister Reformed Churches and, as the report quoted above says: “because their was no general agreement regarding membership.” Nevertheless, the decision to join the W.C.C. is clearly an indication of how far the Gereformeerde Kerken have forsaken their Reformed heritage.

One wonders what effect all this will have on the Reformed Ecumenical Synod. The Synod of the Gereformeerde Kerken was at great pains to stress that they want to retain their ties with their sister Reformed churches in the world which are not members. But the face is that the R.E.S. specifically advised the Gereformeerde Kerken not to join the WCC. What, if anything, will the R.E.S. do about this?

Apparently in order to retain their own “clear Reformed identity” within the W.C.C., the Synod will “establish guidelines for those who will represent the church in the WCC.” It will be interesting to see what these guidelines have to say.

In another decision, the General Synod discussed the whole matter of the binding character of the church’s confessions. We quote the R.E.S. News Exchange.

(Utrecht) The General Synod of the Reformed Churches in the Netherlands reminded all local churches in a letter that the church confessions have binding authority upon all as an accepted basis of fellowship. The Synod also appointed a commission to investigate whether, and if so, in what way a new contemporary confession of faith should be made.

The Synod recognized that the manner of expression and the method of argument in the creedal standards should offer no obstacle to officers of the church to express their complete agreement. Therefore all church officers should abide by the form of subscription.

The Synod reached this decision after a lengthy debate on the binding nature of the confession and its function. On the one hand there was concern to maintain the old truth, in honest fellowship with the forefathers. On the other hand the Synod recognized the need for a new confession that is directed to the issues of today. “We confess all kinds of things which are no longer at stake, and about those matters which are at stake today we make no. confession” one delegate stated.

In its instructions to the commission to consider a new confession the Synod asked that it study the present confessions to determine which elements, besides the manner of expression and the method of argument, stand in the way of a complete agreement with the confessional standards. It also asked that the commission give attention to the way in which the church could arrive at an eventual new confession.

It is difficult to believe that the Synod was sincere in its decisions concerning the binding character of the creeds. For one thing, it was but a short time ago that the Synod completely exonerated Geelkerken who was condemned at Assen for teaching doctrines contrary to the creeds. That the Synod should exonerate him means that the creeds are no longer taken seriously. For another thing, there are many in the Church who not only teach doctrines explicitly contrary to the creeds, but who openly announce their disagreement with the creeds. Yet Synod does nothing about these men and permits them to continue to function in their offices even though now they state that “all church officers should abide by the form of subscription.” And finally, incorporated in this decision is another decision to instruct a commission to investigate the possibility of a new confession. One instruction to the commission is that the commission “determine which elements, besides the manner of expression and the method of argument, stand in the way of a complete agreement with the confessional standards.” This certainly suggests that one important reason for studying the possibility of a new confession is the lack of agreement with the old forms of unity.

Another interesting development at this Synod is described in the R.ES. Newsletter.

(Utrecht) The General Synod of the Reformed Churches in the Netherlands held a discussion that lasted through an afternoon and an evening session with a group of concerned people called the association for “Scripture and Confession.” Representatives of the periodical “Truth and Unity” also participated. The great public interest in the meeting was shown in the large number of people who attended the sessions.

According to observers, the discussion resulted in a clearer image of the central question of the authority of the Bible and the confessions and a great mutual understanding of the varying positions.

The Rev. E.J. Oomkes, chairman of the association “Scripture and Confession” outlined the concern and alarm about the newest ideas on the Bible and the confession. At stake in the “neo-reformed radical theology” he said, is not a view of the Bible but the Scripture itself. When one explains stories of the Bible as non-historical events, one attacks the divine authority of the Scripture. Oomkes charged that many in the church subscribe to the confessions, but do not keep their promise to be faithful. He said that the church now faces the question whether or not it can be called Reformed. The spokesmen for the concerned stated that such a great “credibility crisis” had arisen that they feared a “situation of conflict” would ensue. Some have left the church and others are contemplating leaving, they claimed.

In their responses to the spokesmen for the ‘concerned’, many members of the Synod showed that they could understand what motivated the concerned group in their desire to maintain the true confession. At the same time some voiced criticism at the group’s manner of organized approach that tended to form dangerous fronts in church life.

Professor H.M. Kuitert, whose writings have been much in dispute, said that he could not understand why he was accused of unfaithfulness to the Holy Scriptures. “That is of course the foundation of your life,” he declared. But the theologian has the task of unfettering the language of the Bible, that is, liberating it from the formulations of yesterday in order to give to men today an insight in the liberation of the gospel. The theologian must deal with the formulations in an integral way without compromise. The time is past for trying to solve problems by splitting the church, he said.

AN IMPORTANT UNION-LABOR DECISION IN CANADA

While we are quoting the R.E.S. Newsletter anyway, we may as well refer to another item which deals with the question of religious conscientious objectors in a closed shop or a union shop. The article reads:

(Toronto) By enactment of law, the Government of Ontario has allowed new employees who object to payroll deductions for union dues “on the basis of religious or moral convictions” to have these deductions remitted to the registered charity of their choice.

This action was hailed by Gerald Vande Zande, Executive Secretary of the Committee for Justice and Liberty, as a “precedent-setting move—a move that should have far-reaching positive effect on the freedom of association still being denied to thousands of other Ontario residents not employed in the Civil Service.” Prior to the enactment of the regulation all civil service employees were required to pay dues to the Civil Service Association of Ontario as a condition of employment.

While the new legislation is a step toward complete freedom of association, Vande Zande observed, it is only a beginning. He expressed the hope that the same legal privilege “will also be granted to the thousands of non-government workers who currently are ‘captive supporters’ of secular unions to whose social and political views they are entirely opposed.”

Vande Zande also pointed out that the right of laborers to designate the charity to receive the equivalent of their union dues is a far cry from the right of sending payroll deductions to the union of their choice. As an alternative to the present closed shop and union shop arrangements in which the majority makes decisions for all, regardless of their religious convictions, Vande Zande advocated “multi-union bargaining—a set-up which would allow differently motivated trade unions, which enjoy a certain minimum percentage of support, jointly to represent all employees involved.” 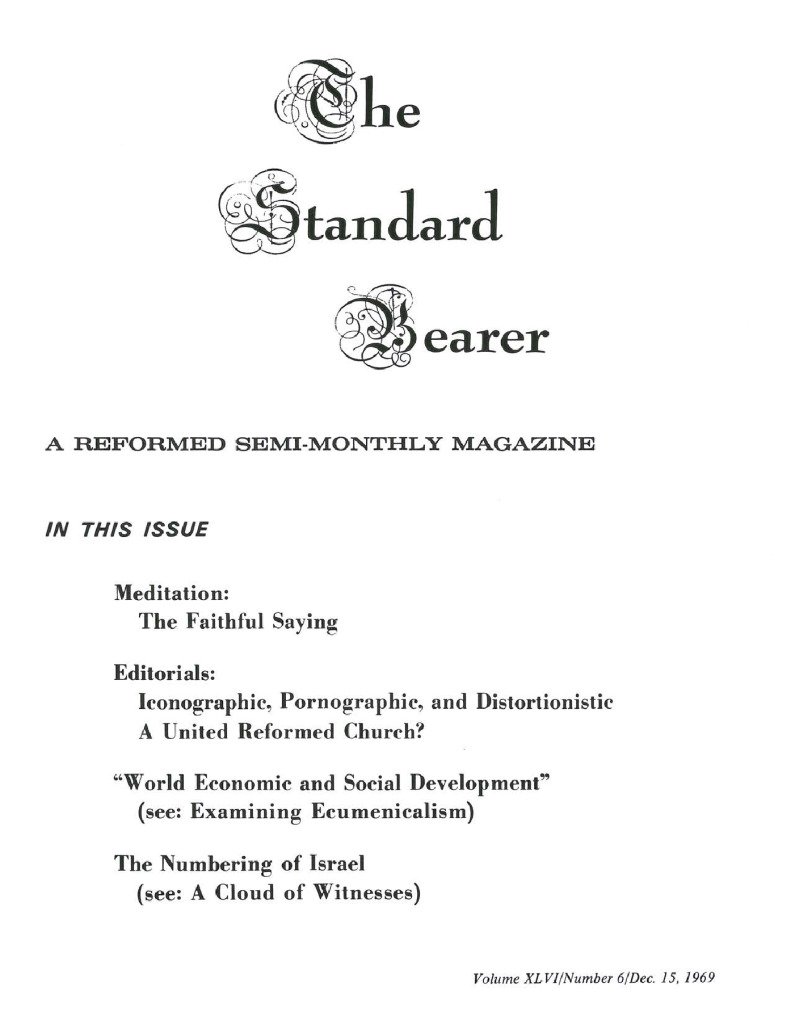