In a fairly new paper, Herald of the Covenant, published by Covenant Presbytery in Mississippi, of the new Presbyterian Church in America, appears a short series on the history of the Protestant Reformed Churches. The articles are written by our own Prof. H. Hanko. These relate the background and history as well as the doctrinal position of our churches. We would express our appreciation and thanks to the paper and its editors for this “southern exposure.”

And Now: an Attack on Election?

In two recent issues of the Banner, April 7 and 14, Dr. James Daane, professor of theology at Fuller Theological Seminary, writes on the “Logic of Election.” The articles comprise, in effect, an attack on the confessional stand on the Reformed doctrine of election. When, in the past few years, Dr. Harry Boer brought a gravamen against the confessional position of “reprobation” as presented in the Canons of Dordt, the CRC Synod of last summer acknowledged this gravamen and declared “open season” on the Reformed view of “reprobation.” This was, of course, a very foolish decision of the Synod. It opens the way for anyone within the church, despite their signature on the formula of subscription, to attack and refute the confessional stand of the church on reprobation. That has never been the intent of a gravamen. The Synod must face the issue squarely and make a decision. Certainly it can not properly allow all kinds of attacks and refutations on a confessional position simply because a gravamen is brought.

But Daane goes one logical step further. He expresses his own personal agreement with Boer’s position against reprobation. He agrees with Boer that the texts quoted in the Canons do not support the doctrine of reprobation. But then he takes off from that position and denies the Reformed doctrine of election as presented in the Canons. To my way of thinking, there is simply no way he can properly do that, and this too in the official church magazine of the Christian Reformed Church, without openly and publicly violating his vow when he signed the formula of subscription. The CRC Synod, in declaring an “open season” against reprobation, improper though this was, in no way declared a similar “open season” against the confessional position of “election.” Daane has violated his vows in which he had declared, “And if hereafter any difficulties or different sentiments respecting the aforesaid doctrines should arise in our minds, we promise that we will neither publicly nor privately propose, teach, or defend the same, either by preaching or writing, until we have first revealed such sentiments to the consistory, Classis and Synod, that the same may there be examined, being ready always cheerfully to submit to the judgment of the consistory, Classis and Synod, under the penalty in case of refusal to be, by that very fact, suspended from our office.”

Daane wants an “election” without “numbers”—that is, without a specific number of people eternally chosen in Christ. He attacks the revered dogmatician of the CRC, Berkhof. In attacking Berkhof, he also openly attacks the position of the late Herman Hoeksema. He says:

Berkhof’s argument is clear. If of all men some are elected, then the remainder are reprobated. Let it be admitted that this logic is good, not bad logic. It is a simple matter of arithmetic, the logic of number. But is this, as Berkhof claims, “the logic of election”?

Daane continues by explaining his own position on “election” and how that differs from the traditionally Reformed, confessional position.

It is this corporate feature of Biblical election that we wholly ignore in our doctrine of individual election. This makes it possible for Berkhof to claim that “the doctrine of reprobation follows from the logic of election”. . . . But we should also notice that when Berkhof presents his The Biblical Doctrine of Election he gives attention only to individual election. Berkhof gives only a one sentence mention of the election of Israel. He does not even mention the election of Christ or the election of the church, nor does he mention that our election occurs “in Christ.” (If he did, he would have to face the question whether reprobation as the logical implication of election does not also occur in Christ.) In a different context, Berkhof says that “Christ Himself is, in a sense, the object of election” Cp. 114). In what sense? Berkhof does not even attempt to indicate. He apparently either could not handle the subject, or thought it not sufficiently significant. But it is obviously a failure on the part of one who says he gives us “the Biblical idea of election.”

Berkhof here reflects the Canons’ restricted view of election. They too are concerned only with individual election, but their restricted concern is understandable because they are concerned, over against Arminianism, with the question of the relationship of the individual’s faith and his election. What I would want the reader of these lines to recognize is this: creedally, and even theologically, we have only a very partial, fragmentary doctrine of individual election, one that is neither set in nor shaped by the whole Biblical doctrine of election. And it is on the basis of this Biblically deprived and impoverished view of election that we, via the logic of numbers, so largely based the doctrine of reprobation. . . .

The understanding of election in terms of number is also strangely entwined in the argument of the Canons that the gracious character of election is especially apparent in the fact that some men are reprobates. The Canons declare, “What peculiarly tends to illustrate and recommend to us the eternal and unmerited grace of election is the express testimony of sacred Scripture that not all but some only are elected, while others are passed by (that is, reprobated) in the eternal decree” (Head 1, 16). Does this reflect Biblical teaching? Is the gracious character of my, or your, election recommended to us and peculiarly illustrated by the fact that God has reprobated some men to eternal damnation? Is God’s grace to me distinctively enhanced and illustrated by the fact that God excludes some from His grace so that they are damned forever?

I can understand the force of this argument in terms of the logic of numbers. If some are reprobated then some must in grace be elected. But is reprobation the mirror that reflects the truth and beauty of God’s gracious election? Think in terms of numbers and the argument makes some sense. But think in terms of the real nature of God’s grace and God’s election, that is, without the ingredients of numbers (limitation), and it does not make sense. Not Biblical sense.

So there you have an attack on the Canons and their presentation of election. Contrary to his ordination vows, contrary to any position of his own Synod, Daane challenges the Canons on the subject of election. His attack must surely put the CRC “on the spot.” If they do what the ordination vows prescribe, they would loose Daane and perhaps some of his followers. If they do not maintain those requirements of the vow, they proceed one more step toward eventual destruction of their confessional position as a Reformed church.

Daane also puts the CRC “on the spot” in reminding them that either they have to adopt his own view of election, or they ultimately must adopt the view of the late Herman Hoeksema. He writes:

. . . I am arguing that the logic of election is not the logic of number, that the ground of reprobation does not lie in election, that it is not true that none can be saved unless some are damned, that there can be no people in heaven unless there are also people in hell. Herman Hoeksema endorsed all that I am here rejecting, but he has the perception to accept the consequence—which he freely admitted—that God could not save some without damning others. This view is the final consequence of a theology which thinks that the logic of numbers is the logic of election. Think of election in terms of numbers, and Hoeksema’s position is where you finally land.

It might be of value to examine the presentation by Daane of Hoeksema’s view on election. Daane does not entirely and accurately present his position. It might be of interest too to examine Daane’s own reasoning concerning the Scriptural position of election. Perhaps there are some, yet, in the CRC who are willing and ready to defend their historical (and confessional) stand on election. I would hope and pray so. At the same time I can imagine that Daane’s articles caused a bit of squirming in the CRC when he demands that either they agree with his position—or they ultimately end up in Hoeksema’s camp. What a dilemma! 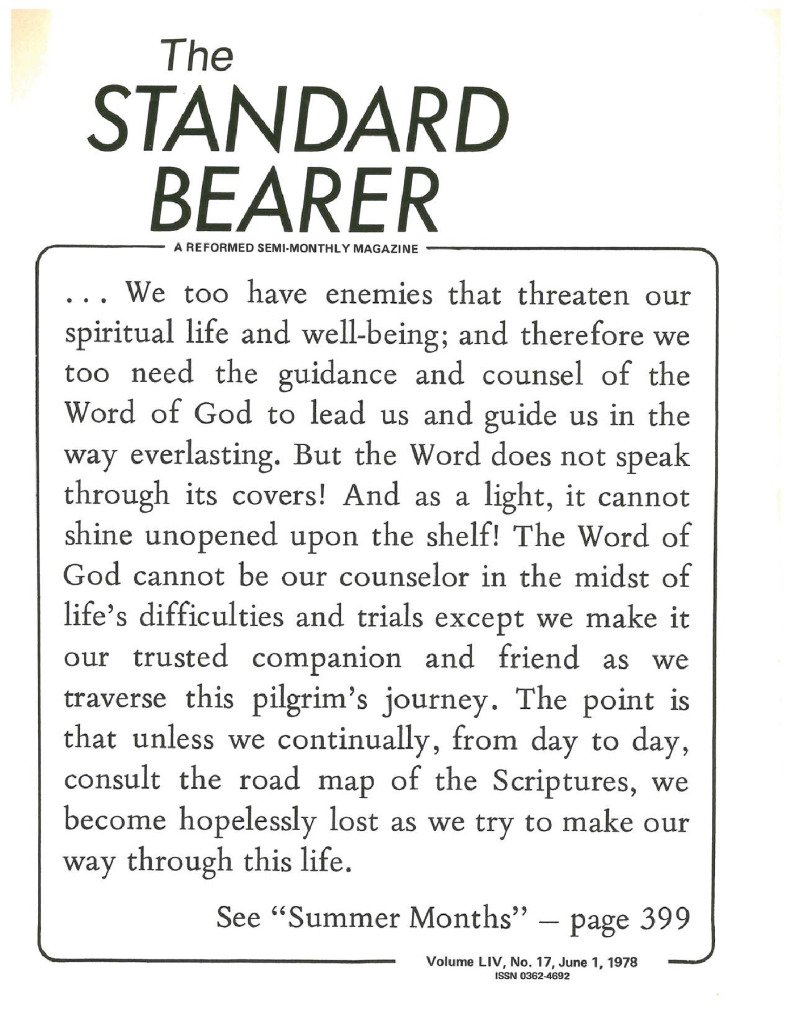