The Church and Persecution

One might be inclined to say that persecution of the church is rather out of the question within freedom-loving countries such as Canada and the United States. However, these countries have maintained a certain “separation of church and state”—going to absurd and evil lengths to see to it that there is no reference to God, His Word and law, in any public institution. Now, attempts are being made for the state to impose upon the church its own standards of morality. A report of one such attempt is made in theClarion, Canadian Reformed Magazine, of June 4, 1982. In it, Rev. W.W.J. Van Oene quotes from Hon. Mr. Walter Baker, a member of the House of Commons in Canada, and quotes from other sources, about a bill which would create havoc in the faithful church:

In his letter, Mr. Baker states that his concerns with Bill C-10 relate to clauses 116, 214, and 215. The relative clauses are too long to insert here, and therefore I pass Mr. Baker’s summary on.

Let us assume that a minister is suspended and deposed on the ground of homosexual practices or on the ground of adultery; or that a member is excommunicated because of hardening himself in the sin of adultery, such a member would have the right—according to the bill—to appeal to a court of law to have this court rule on that disciplinary procedure.

Even if the entire church membership should support the action taken, clause 215 gives the court the right to ignore such support. As the offences as such are not against the Canadian law, are not criminal offences, every one has the right to do these things and he may not be penalized in any way for doing them. . .

. . .Clause 214 gives the court the right to order the corporation “to regulate a corporation’s affairs by amending the articles or by-laws or creating or amending a unanimous member agreement.” Further the court has the right to issue “an order appointing directors in place of or in addition to all or any of the directors then in office.” Another right which the bill gives to the court is to issue “an order liquidating and dissolving the corporation”. . . .

. . .If a member is excommunicated for reason of hardening himself in a sin against any of God’s commandments, the court may require that a Church pay all the costs not only for the defense of its own actions but also those of the complainant, of the person who appeals to a court. If the case is dismissed, the complainant will have to pay it all back, but in the meantime the Church would have to pay it with the possibility that the complainant has nothing to pay back, all of it or even part of it.

The courts could also replace all the legitimately chosen and ordained office-bearers and appoint others in their stead, people who, of course, value human ordinances higher than the Law of our God.

Let no one think that this law does not apply to the Church. It is An Act Respecting Non-Profit Corporations. As Churches are Non-Profit Organizations, they come under this Act.

. . .Bill C-10, however, shows clearly that persecution may not be all that far from our doorstep, and we had better realize this. . . .

It seems to me that I have read more recently that the above attempt to regulate even churches failed. Yet it points out the dangers which the church faces today. In the name of “liberty” and “justice” for all, government will try to force churches to conform to the standards of morality adopted by the world. Sounds like the days of Daniel when he was told what was “good for him” to eat—yet he had to refuse because it was contrary to the requirements of God’s law. We may have to do this too—perhaps sooner than we think.

In “Acts & Facts” of the Institute for Creation Research, there is a report of an interesting survey by Gallup Poll concerning creation (vs. evolution). October, 1982:

The first time it ever asked a question, the Gallup Poll discovered that 44% of the American public agree with this statement: “God created man pretty much in his present form at one time within the last 10,000 years.”

Only 9% believed that “Man has developed over millions of years from less advanced forms of life. God had no part in this process.” When the second sentence was changed to “. . .but God guided this process, including man’s creation,” 38% agreed. Only 9% said they did not know. Thus, 82% of a sample representing all Americans expressed belief that God was responsible for the creation of man, either directly, supernaturally, (and recently, 44%) or through somehow “guiding” a long slow process (38%). The figures are impressive. Equally impressive, but in the wrong sense, were the responses of “leading” clergymen (as reported in the San Diego Union, Aug. 30, 1982). These expressions of deep religious conviction, which have had to survive decades of evolutionary indoctrination and public ridicule, brought forth expressions of

dismay (not rejoicing, but dismay!) from “prominent” religious leaders! Kenneth Hicks, a bishop in the United Methodist Church who opposed the balanced treatment for creation-science and evolution-science law in Arkansas, thought it was almost incredible that 44% should still accept a recent supernatural creation of man. In an astonishing admission of incredible ignorance, one Episcopal bishop said that he did not know a single reputable Biblical scholar who believed in the recent, direct creation-of mankind! In fact, a chief cause for “dismay” in the evolutionary establishment, religious or academic, was that a full quarter of the 44% accepting the recent creation of mankind were college educated!. . . .

If this poll indicates the actual number in this country believing in the creation account, it would seem that the evolutionists (evidently only a minority of people), have “pulled the wool” over the eyes of many. It seems that the majority, though they do not believe there was evolution, yet allow that view to be foisted upon the whole of the people. Schools teach it as scientific “fact.” Those who object to the teaching of evolution are regarded as unscientific, even backward. Any public display, whether in museum or in some national, state, or local park, presents an evolutionary display concerning the origins of all things. Passively, the “majority” sit by, for none would dare oppose “science.”

Recently, here in Hudsonville, the minister in the local Baptist Church, objected to the evolutionary presentation in an area park supported with local dollars. He claimed that if we, the people of the area, mostly church-going people at that, are to pay for such display with tax dollars, we ought to insist that it present not evolution but creation. A cry arose that we must not allow anyone to foist their religious views (creation) upon the people. There must be “separation between church and state.” In the meanwhile, a small minority “foist” their views (hardly scientific either) of evolution on the majority. If a “majority” rules, then why should this happen? If it is “wrong” to foist one view on others, why is it right to “foist” the opposite view of the opponents?

It seems to me that often we dare say little about the whole idea of evolution, since that view is adopted by the “scientific” community. The Christian ought not to be intimidated by “science” or “men of science.”

The Grand Rapids Press, October 16, 1982, presented a survey of membership growth over the past decade. The “mainline” denominations, for the most part, declined in membership. Even the Christian Reformed Church, in Kent and Ottawa Counties, had a slight decline in total membership. That membership should decline in the larger denominations is not so very strange. The Press stated:

According to the survey, the major religions haven’t kept pace with the population growth, while some of the smaller, more evangelical religions have experienced a boom.

“We are really riding a conservative wave culturally,” said John Primus, professor of religion and theology at Calvin College.

Referring to the study results, he added that “this is the first time any big American churches have actually lost membership.”

Primus said the change is “dramatic.” Until the decade of the ’70s, most major denominations experienced steady growth. He attributes the decline in membership to the conservative swing in the country and people’s search for religions that offer them, at least as they consider it, “deeper meaning.”

It is true that for all of their innovations, the large denominations appear rather to “turn people off.” God’s people are not being fed—so they seek such a church where they can again hear the pure preaching of the Word. And those who retain membership in the large denominations, often fail to find reason to attend church faithfully—entertainment, after all, is not a good reason to go to church.

One can not help but notice that also the Christian Reformed Church, though it is not considered one of the large main-line denominations, had an overall loss of membership in the two counties where it originated. It was, I believe, a little more than ten years ago that Prof. Dekker of Calvin Seminary had proposed that the Christian Reformed Church would be more successful in its missionary efforts if it proclaimed “God loves you” to all those encountered. Many novelties have been added to some of the C.R.C. services in the area. Great effort is directed towards those of minority races to bring these into the church. Yet for all of that, there is a decline. Even internal growth, without any outside additions, should have produced a sizable percentage of growth. The decline would appear to indicate a loss of many of those born with in that church. The decline, it seems to me, can be attributed to a loss of doctrinal distinctiveness and failure to maintain the Reformed heritage. So, as Primus stated, there is the “people’s search for religions that offer them, at least as they consider it, ‘deeper meaning.'”

The P.R.C. were not included in the survey, of course. They are just too small to count. Yet, according to my personal estimate, these churches in Kent and Ottawa counties gained a total of 27% membership. I am convinced that there are two reasons that might be noted: first, the faithful instruction of covenant seed; secondly, the addition of such who have joined the P.R.C. because they seek that “deeper meaning” in their religion. This growth, of course, can be attributed ultimately to the graciousness of our God Who has been pleased to provide for the churches in the past years. 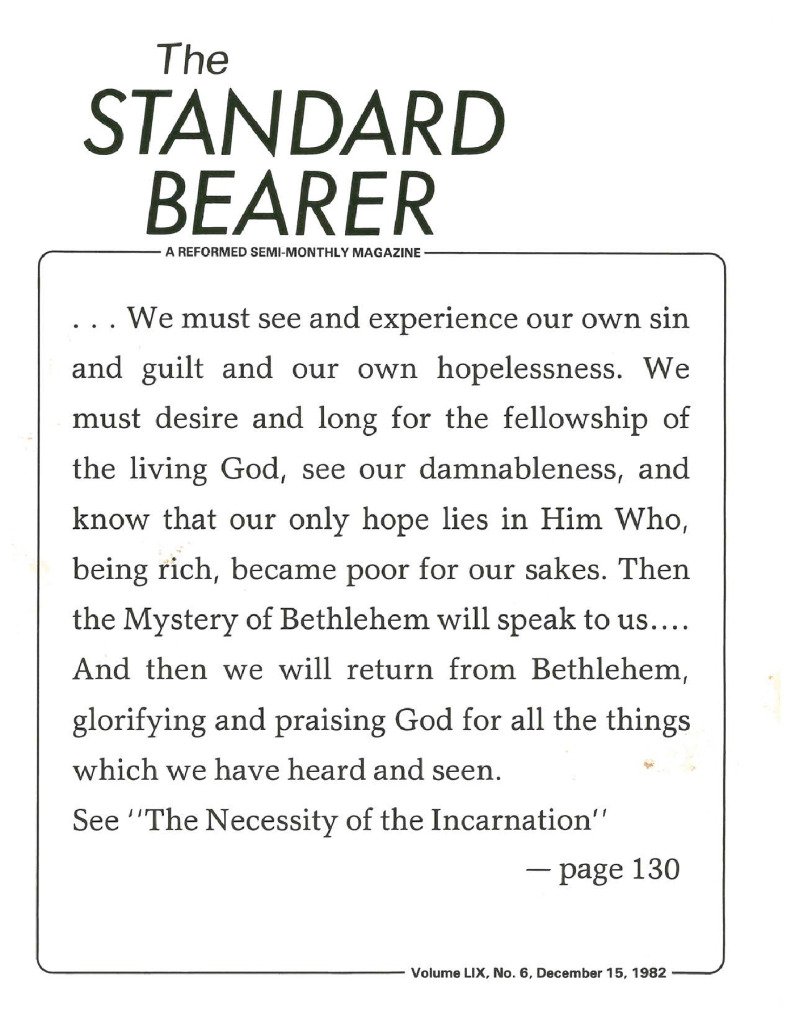