One often hears, in excuse for the horrible sins portrayed in the movie and television, that one must present “real life.” Adultery, fornication, murder—all these are “real life.” Yet the desire to portray “real life” stops at the point of religion. This fact was pointed out in a news release in the Grand Rapids Press of Sept. 6, 1980:

A church film producer and critic says “movies these days reflect almost every aspect of life and death but seldom do they deal with an experience common to millions in every age—religious faith,” except to spoof it.

The Rev. Robert Lee, film producer for the Lutheran Council in the U.S.A. and film reviewer for a radio series sponsored by the council and the Episcopal Church, says most Americans believe in God and pray, especially in situations of fear or extremity but he adds:

“Movies censor out this reflection of real life more often than no.”

Also, although 40 percent of the US. population worships each week, movies rarely depict worship except occasionally as a “comic interlude,” he says. He says clergymen, when depicted, usually are shown as negative stereotypes—”inept, blundering, prissy or vain and fuddy-duddy.”

Script writers “seem to have been seduced by secularism to the point of embarrassment at including bona fide religious moments,” he says.

That presents an interesting point. If the movie and drama in general are so terribly concerned about presenting “real life,” why is the vast majority of presentations about the most horrible sins? The hypocrisy of the claim of presenting “real life” is rather obvious. The only “real life” the movie industry is interested in is the kind which titillates, the kind that attracts an audience which enjoys portrayals of the grossest forms of adultery and murder. This industry is not interested in “real life,” but rather in the godless life. Yet some “Christians” condone this sort of thing.

On the other hand, were the movie industry to portray religious scenes, even apart from the “negative stereotypes,” we should strenuously object. How can an industry, dedicated merely to profit and entertainment, comprised, as far as one can observe, of the greatest of unbelievers, portray any kind of religious scene? Would not such portrayal be stench in the nostrils of the Almighty? What Christian could find pleasure, entertainment, and much less godly instruction, in such presentations? I trust that none would.

Which brings one to the point: on what basis can the Christian enjoy the film industry presentations (I would refuse to call this “film arts“)? If the religious can not, will not, (and from God’s viewpoint, may not) be presented; and if what is presented almost inevitably involves the glorification of violations of God’s laws; how can the Christian find a seat within the theatre or in front of the TV to see this?

Some reports and decisions of major church bodies are being presented in the various religious periodicals. One shocking example of the direction in which churches are going can be seen from a report presented to the General Synod of the Anglican Church of Canada. (Christian News, June 23, 1980):

An Anglican Church report says it’s time to drop “conventional prissiness” and the habit of “passing by on the other side” because of the growing number of couples who live together without being married.

The report upholds the traditional view of marriage but takes a much more positive view of “living together” than any previous study by the Canadian wing of the 65-million member worldwide denomination.

It says that some forms of informal cohabitation can be sacramental and a “means of grace” for the couple involved. It distinguishes between various kinds of living together and says that where “free consent and sexual consummation” are found in the context of a life commitment, a marriage already exists “in substance” if not conventionally or legally.

. . .Bishop Geoffrey Parke-Taylor. . .said in an interview that the church in the past had fallen into the trap of being overly condemnatory.

“There are a lot of anachronisms in our attitudes; more and more people are living together without formal marriage and the sooner we face this reality the better. But we walk a knife edge on the issue. If we condone such relationships, we’re seen as too permissive; if we’re rigid and judgmental, we turn people away just at a critical time when they need our ministry.”

. . .Although the church has traditionally limited the word “sacramental” to church weddings, the report says:

“In an age when devout Christian men and women are found living together without the official sanction of marriage, we know from their experience that they minister God’s grace to one another.”

God, the report says, is not confined to his sacraments, nor is the sacrament limited to the church’s actions and thoughts.

“We must be prepared to marvel in silence when we see that he can make common law marriage’ on occasion a means of grace.”

The authors go on to say they would like to see all such relationships officially sanctioned, “but God’s action does not require our sanctions.”

. . . .Appended to the report is a series of “pastoral cases” suggested for use in group study of marriage and related problems. One of these postulates a case of a minister who is cohabiting with a Christian woman and has applied for a church position for which he is eminently qualified. The questions are:

Does it matter if the position is that of a parish minister, a chaplain to an institution or a church administrator?

In your consideration, how important is his domestic situation?. . . .

The action of the General Synod of the Anglican Church of Canada was reported in the Presbyterian Journal, Aug. 13, 1980:

The General Synod…did not know what to do with a formal study report on the general subject of marriage, divorce and living together. The problem was that the report condoned the common practice of living together without benefit of marriage. . . . Among the clergy who favored the report’s findings was the Rev. Gary Patterson of the Caledonia Diocese who said he found the report “exciting and realistic.” Others were critical. Professor Donald Master, of Guelph University, a layman, said, “I find it absolutely incredible in a day of slipping morals that the church should approve of something which many heathen would not accept.” The Synod, uncertain as to what to do, referred the report to the House of Bishops “for further study.”

That such reports could be presented is itself shocking. That those who write such a report are not themselves subject to the discipline of the church, is almost inconceivable. That a church body does not forthrightly reject and repudiate such a report seems impossible. There is, evidently, no study of Scripture in this regard. There is no concern with the clear and unmistakable testimony of Scripture against adultery and fornication. Rather, sin is termed a “means of grace” under certain circumstances. The concern seems to be that the church appear neither too “permissive” nor too “judgmental and rigid.” This is the sad consequence of denying the infallibility of Scripture.

The Christian News, June 23, 1980, reports also the action of Presbyterians where the ministers are told to accept women in the ministry—or resign.

Presbyterian Church ministers opposed to women clergy have been given 10 years to change their minds or get out, the 106th General Assembly has decided.

The assembly meeting in Windsor also decided to ban from now on the ordination of anyone opposed to women clergy. The ruling requires Presbyterian ministers to cooperate fully with female elders and clergy, but will not—until 1990—force them to take part in ordaining women themselves.

The church, which has 166,190 adult members, decided to ordain women in 1966 but about 15 percent of its 993 ministers are adamantly opposed to the move.

The long-simmering controversy came to a head here when delegates to the assembly debated the “test case” of ‘Daniel MacDougall of Bridlewood Church, Toronto.

Mr. MacDougall, after receiving his theological training, asked to be ordained, but, in so doing made it clear he was opposed to women clergy and could not in good conscience participate in such ordinations.

The East Toronto Presbytery refused to ordain him and so did a church board of appeal.

. . .The motion outlining the 10-year deadline for dissidents contained a clause permitting Mr. MacDougall to be ordained but imposing the ban on ordination of anyone opposed to women clergy. . . .

So, ordination of women has come to the full cycle. First, there is permitted ordination of women into the offices of deacon and elder. Later, women are allowed to be ordained into the ministry. All this is presented as a “voluntary” sort of action. But soon, when the “liberal” has seized firm control, there is no longer “voluntary” action, but it becomes compulsory. The Presbyterian Church appears to moderate its decision by allowing the ministers 10 years during which to “see the light.” Yet one sees the mark of the anti-christian church—the “church” which demands of its ministers and members to subscribe to that which is plainly contrary to the Word of God. We’ll be seeing more of this, doubtlessly, in the future. 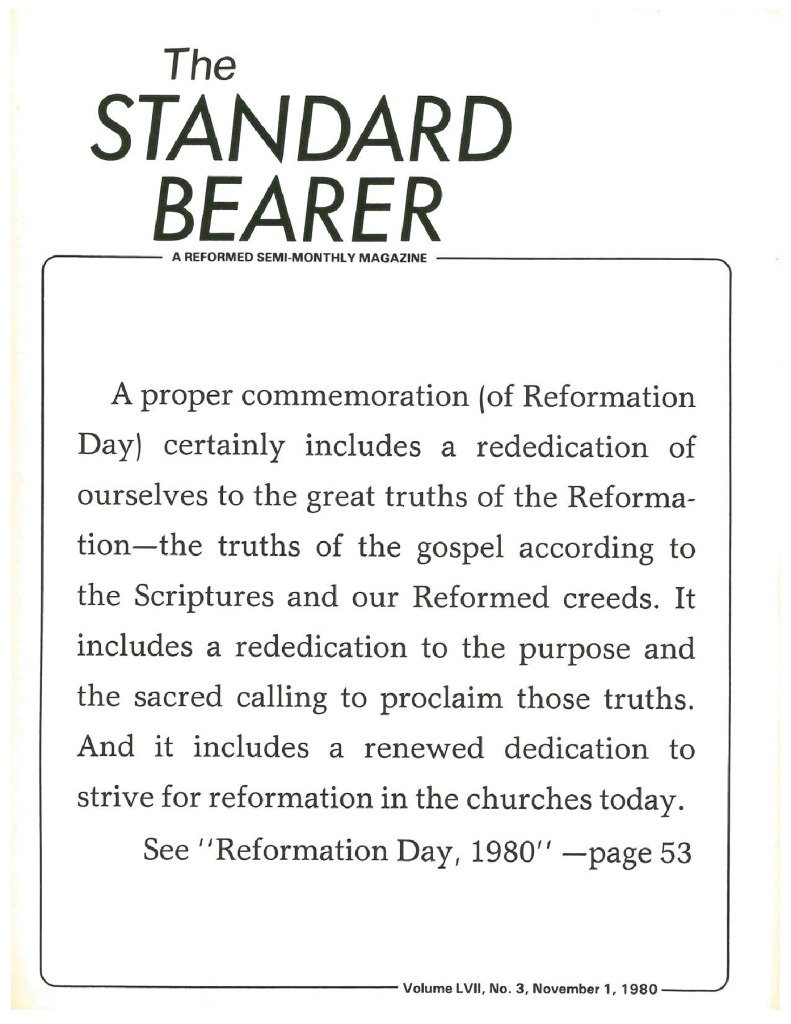