Ann Landers is known by most who read the newspapers. She gives advice to the lovelorn. Some of her advice is a matter of simple common sense. Much of it is based not on the morality of Scripture, but the “morality” of natural man. The writer of that column recently took a position as “pro-choice” in the abortion issue. The term, “pro-choice” is deceiving. One might rather term the position of these “pro-choicers” as being “pro-murder” (within stipulated limitations). Ann Landers’ public stand generated much response. One lengthy response appeared in The Christian News, September 21, 1981, written by Rev. Earl A. Bielefeld. He responds:

I read with interest your two columns on abortion and want to take strong exception to your assertion that “The questions were good but Dr. Ryan’s answers were better….”

…The doctor asserts that the HLB (Human Life Bill, ed.) “would present great difficulty for obstetricians to provide health care to women who are pregnant.” I would ask what, besides medically unnecessary abortions, would this bill prohibit? He mentions tubal pregnancies and cancer, presumably of the uterus. These, of course tare life-threatening medical conditions which are expressly allowed….

The good doctor feels that the fetus is “biological life” but not a human being. Later he says that the humanity of the life is not a scientific question but philosophical, moral, and theological. If this biological life is not human,; what is it? Canine? Feline? Bovine? Equine? Its genetic code with 46 chromosomes is found only in humans. The fetus proceeds from human intercourse and takes its temporary residence in the sustaining environment of a human womb. I think the good doctor is confusing “humanity” with “personhood” under the constitution. The latter is indeed a matter of legal opinion. …The Roe vs. Wade decision (of the Supreme Court) has an ominous precedent from 1857, namely, the Dred Scott decision. You’ll recall that our august Supreme Court then decided that although blacks were humans, they were not “persons” under the law and were therefore not covered by the constitutional guarantees of life, liberty, and the pursuit of happiness.’…”

…The doctor says that “genetic screening programs represent a great advance in diseases such as Down’s syndrome.” He fears that should the HLB become law this would become irrelevant as he could no longer “offer the woman a choice.” The term “choice” sounds very appealing to a freedom-loving American, but the thought must properly be completed. Freedom to choose what? In this case what is being sought is the freedom of a woman to kill her unborn child. Are you aware that some of this “genetic screening” is being used to identify children of an unwanted sex so that they can be terminated? Are you aware that mentally and defective newborns are being actively and passively killed by doctors who brag of this in prestigious medical journals? Wake up and smell the coffee, Ann. The holocaust didn’t end with the death of Hitler in 1945; its been reincarnated in a segment of the American medical profession today…. If America ultimately swallows this measure of fascist eugenics, I don’t doubt that somewhere down the road we’ll get around to putting all mentally and physically defective persons “out of their misery.” I can just see some bureaucrat heading some such “better late than never program.”

In your second column we perhaps get to find out what rea1l.y makes Dr. Ryan tick. It’s economics. “Instead of a single cost of $125 for an abortion, we will pay $1,000 to $1,500 for a delivery and at least $100,000 to support these welfare children until they reach maturity. This is a commitment of about 40 billion dollars every year.” Could you please inquire as to how many of those $125 fees Dr. Ryan collects per year? Doubtless he pays some rather hefty income taxes which may explain his distaste for helping support poor people on welfare. Clearly, Dr. Ryan is a materialist who places a dollar value on human life, especially the lives of the poor whom he could terminate for income and avoid helping with his taxes.

…So pro-lifers are o.k., if they merely disapprove of abortion and preferably keep it to themselves. But some seek to actually defend the lives of the innocent unborn and they become dangerous to democracy by asking their elected officials to pass laws to that effect. But most people oppose theft, murder, rape, slavery, and cruelty to animals on religious grounds. Should we appeal those laws that are so fatally flawed by religious motivation?

et al. also regards the unborn as individual humans should strengthen, not negate, this view….

The letter continues by warning against that same attitude as was evident in Germany before and during World War II and the “wanton slaughter of millions of innocent but unwanted members of society.” And the warning had better be taken to heart. It is certainly true that “Pro-choice” can quickly be applied to families who must deal with very aged and infirm members. Ought they too not have the “right” of “choice” whether or not they terminate the lives of the infirm and handicapped—which otherwise they must support at great financial sacrifice? Does not “pro-choice” also imply that one ought to have the right to do with his body as he would—including the commission of suicide? Let it be clearly understood—this is not a matter of “pro-choice” but “pro-murder.” It is the viewpoint that one has a right, under limited circumstances, to take the life of another, though his own life is not endangered. That is violation of the sixth command.

The Author of Genesis

In Christian News, September 28, 1981, there is a report of a computer study of the book of Genesis to determine whether its author is one—or whether there are several. The leading theologians of the past century have boldly asserted that there are more authors than one to the first five books of the Bible. The view is held even within such “conservative” schools as Hope College of the Reformed Church in America. The view is in direct conflict with the clear teachings of Scripture and must rest upon the theory that the Bible is not infallible.

Liberal theologians, who reject what the Bible and Jesus Christ teach about the authorship of the first five books of the Bible, have long argued that these books were compiled from various sources designated by them as J-E-D and P.

Now the September 28 Newsweek reports in an article titled “Did One Person Write Genesis?”: “The cold-blooded precision of technology may seem to be at odds with the mysteries of religion. But in a computer study of the Bible called the Genesis Project, the twain have met—and surprisingly, the Good Book has won a vote of confidence from the soulless machine.

“At issue is the authorship of the Pentateuch, the first five books of the Old Testament. Traditionally, Jews and Christians alike considered the Pentateuch to be the work of Moses. But for the past hundred years, liberal theologians have generally agreed that the books of Moses are the work of a variety of writers.”

Newsweek says that “Two narrative strains that scholars have long considered distinct because they employ different words for God turned out to be linguistically indistinguishable when methodically compared by the computer.” Newsweek quotes project coordinator Yehuda Radday: “It is most probable that the book of Genesis was written by one person.”

…Orthodox Christian scholars believe that one person is the basic author of Genesis because this is what the Bible and Christ teach. Their position is not based on the results of any computer study….

It is indeed interesting, if all the above is correct, that the learned “theologians” of our day, who have so long sought to undermine the faith of many in the trustworthiness of the Bible, are exposed by the scientific ingenuity of natural man. The child of God needs no computer to convince him of the infallibility and inerrancy of Scripture. Yet when natural man points out the absurdities of these “theologians,” the Christian can only rejoice that the foolishness of man becomes exposed even already on this earth. But, of course, one can hardly expect that the learned “theologians” will agree with this study—for it is rather traditional in this camp to accept only such scientific findings as seem to support their own positions.

The Presbyterian Journal, September 30, 1981, presents an article which points out the inconsistency of those who fault the “new right” for attacking “pluralism” in American life. It states:

Critics of the New Right, including the Moral Majority, are charging conservatives with doing exactly what they have been doing for years, according to Rep. William L. Dickinson (R-Ala.).

Mr. Dickinson was referring to charges made by such liberal organizations as Americans United for Separation of Church and State, that the New Right attacks “pluralism” in American life by insisting there is but one “Christian” position on various issues.

“My own church, the United Methodist, has done the same thing,” Mr. Dickinson said. He said the denomination had tried to intimidate him, as a member of Congress, for not holding to the denomination’s stand on abortion.

Quoting a “chastising letter” from his church, the Congressman said, “An intimidating section in the letter stated, ‘On behalf of all United Methodists, many of whom are voters in your district, I urge you, a United Methodist member of Congress, to evaluate your denomination’s thoughtful position on this sensitive issue.'”

The writer continues by pointing to a Mr. Gaddy, senior minister at the Broadway Baptist Church in Fort Worth, who accused the New Right of perverting politics. He said, “Religious freedom is being eroded by a disregard for pluralism.” But the writer of the article points out the double standard which is being used:

About such attacks, Mr. Dickinson said, “The hypocrisy is that the critics are among those who have most actively ‘used religion for their own political purposes.’ The attacks on evangelicals have come from radical elements of the mainline Protestant establishment at the national level which for years have been deeply involved in various political actions and causes.

“They operate together on a coordinated basis from elaborately financed church offices in New York, Washington and other locations. In many instances, their local churches at the ‘grass roots’ don’t even know how their money is being spent,” the Congressman said. 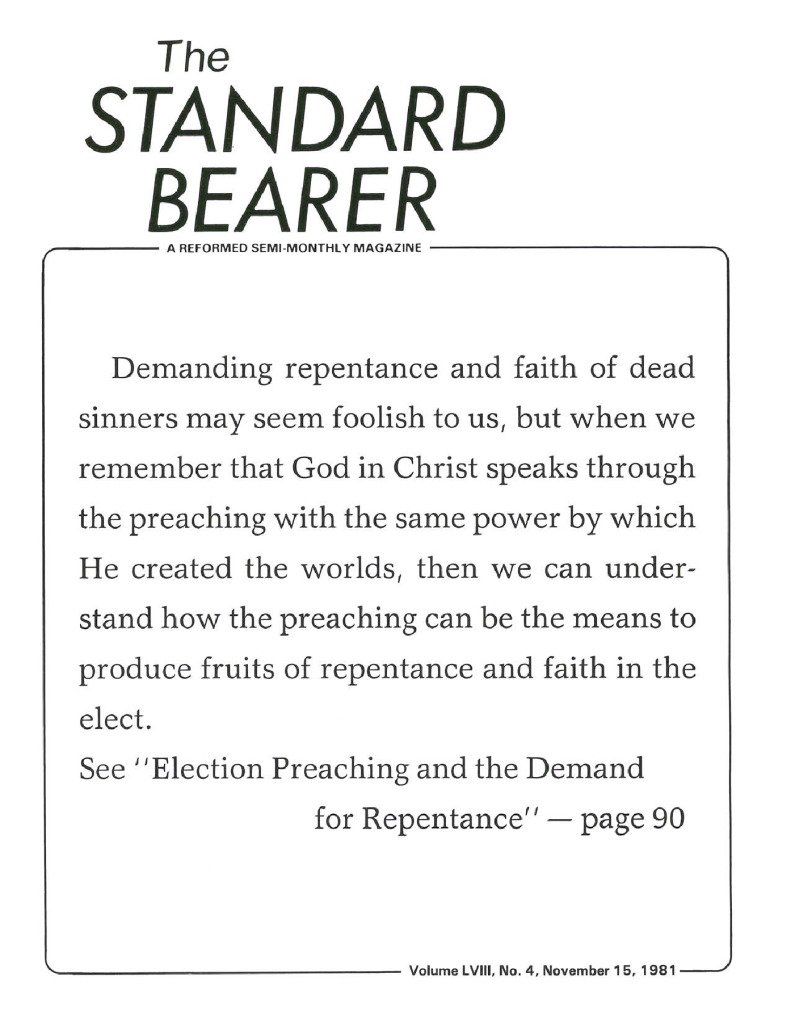