Time, Sept. 29, 1980, presented an interesting account in its religious section of a certain religious leader who said that God does not hear Jewish prayers not made in Christ’s Name. He was promptly labeled “anti-Semitic” and many of his fellow church members berated him for the same “sin.”

Last June in St. Louis, well-organized conservatives at the annual meeting of the Southern Baptist Convention elected a stem-winding preacher named Bailey Smith, 41, as president of the nation’s biggest Protestant group 113.4 million members). Smith. . . managed to keep a low profile until a big August political rally in Dallas, organized by the rising Protestant right. Reporters flocked to a press conference where Ronald Reagan was holding forth in favor of biblical creationism, and so most of them missed Smith’s address to 5,000 in the main arena. Said Smith: “It’s interesting to me at great political battles how you have a Protestant to pray and a Catholic to pray, and then you have a Jew to pray. With all due respect to those dear people, my friend, God Almighty does not hear the prayer of a Jew. For how in the world can God hear the prayer of a man who says that Jesus Christ is not the true Messiah? It is blasphemous.”

Sensing more anti-Semitism than due respect, “those dear people” decided Smith’s words should not go unnoticed. Last week the American Jewish Committee sent transcripts around the country. Smith persists in his opinion, but many S.B.C. members are embarrassed over their leader’s theology. Said Jimmy Allen, head of the radio-TV commission and a former S.B.C. president, Smith’s statement “doesn’t represent the position of most Southern Baptists. God listens to the needs of every person who calls on him.”

This reaction is of more than passing interest—it is also deeply disturbing and perhaps indicative of that which we can expect in the future.

But what did Jesus say? Did He not claim, “. . .neither knoweth any man the Father, save the Son, and he to whomsoever the Son shall reveal him” (Matt. 11:27)? Again, Jesus said in John 8:42, “If God were your Father, ye would love me: for I proceeded forth and came from God; neither came I of myself, but he sent me.” And did Jesus not say, “I am the way, the truth, and the life: no man cometh unto the father, but by me” (John 14:6)? Now, would any dare to accuse Christ, a Jew according to His flesh, of being anti-Semitic? To maintain that one comes to God through Jesus Christ alone is the teaching of Scripture. It is the truth that every child of God must confess. If this “doesn’t represent the position of most Southern Baptists,” then they can not claim to be Scriptural, nor do they maintain Scripture. It is nonsense that when one quotes what Jesus said, he is therefore anti-Semitic (or anti-Hindu, or anti-Moslem). He rather maintains the truth that Christians have ever maintained: access to God’s throne is only through Jesus Christ our Lord, God’s Son.

This same issue of Time contained another disturbing article about “licensing” teachers. The following is part of what was written:

Doctors are licensed. So are lawyers, hairdressers and real estate agents. Should schoolteachers be licensed too? At present, most public school teachers are required only to hold state certificates. Unlike licenses, these are usually awarded automatically when teacher candidates graduate from an accredited education program. Once granted, such certificates usually extend through a life-time of teaching—unless the holder is convicted of a crime or proved flagrantly incompetent. . . .

. . .Adler’s plan: Require teachers to pass state board examinations before being allowed into the classroom. Tests of teacher competency are already required in 14 states. But as Adler sees it, such tests should be designed more broadly, to measure knowledge not just of teaching theory and basic pedagogic skills but of history, great literature and art. Furthermore, says Adler, the tests should be prepared “by the leading critics of our school system and of our teachers.” Adler’s plan could enhance opportunities for educated aspirants to become teachers by performing successfully on the licensing exams, while making the mere accumulation of required education course credits less important….

The proposition that teachers ought to be competent should be a truism. The proposition to have teachers tested and licensed, is a matter of deep concern. Who draws up the tests? Who measures the results—and by what standards? A teacher who is so foolish as to believe still the creation account, will he perhaps fail the test? What of a teacher who still believes in God and Jesus Christ His only-begotten Son? Will such a teacher be regarded as “anti-Semitic”—and therefore fail to receive a license? Competent teachers—yes; licensed teachers by the state which may likely exclude those who serve God—no. The suggestion leads to increased state control and regulation.

This past summer the R.E.S. met in Nimes, France (Southern France) from July 6 through 25. According to the R.E.S. News Exchange, there were a hundred delegates from 38 member churches. There was some question whether the R.E.S. would even survive in light of various disagreements which had arisen among the member bodies. There is disagreement about the dual membership in the R.E.S. and the World Council of Churches. Some Reformed churches are members also of the W.C.C. There was also the continuing disturbance about the doctrinal laxity of the Reformed Church in the Netherlands.

At the beginning of the sessions, Dr. Paul G. Schrotenboer “had expressed concern. . .that excessive attention to internal problems would prevent the churches from undertaking their service together in the world today. He also urged the Synod to spend more time in praise and prayer. Both pleas were heeded.”

The final conclusion of the meeting was that “in the end all major decisions except one or two were taken almost without dissent.”

Among the various actions taken was that the Synod decided to undertake a “biblical, historical, contextual” study on human rights. . . .” The report of the Synod also informs that the “RES takes decisive action on homosexuality.” The report states:

In its decision the Synod recognized the intention of the GKN (Reformed Church in the Netherlands) in their pastoral concern in drawing attention to the suffering, despair and experience of rejection to which homosexual persons in many cases are being subjected. The Synod also stated “in accordance with the traditional Reformed understanding of Scripture” that all homosexual practice is sin. It further stated that “any advice or counsel that weakens the resistance to sin does not help but actually harms both the struggling person himself and others who might be affected through him.”

The Synod concerned itself again with the “social injustices” in South Africa and urged its member churches there to seek to remove such structures. The Synod initiated another “final” study on the W.C.C. in order to resolve this troubling issue. Presumably the Synod of 1984 will make a final decision concerning dual membership in R.E.S. and the W.C.C. Also, the Synod presented a 21-point statement concerning the social calling of the church. As part of its statement, the R.E.S. declared: “the church should realize, however, that our whole world is burdened with structures that create poverty, injustice and oppression. All systems of our modern age are, to a lesser or larger degree, at fault at this point. In its prophetic ministry the church should not only reject all totalitarian systems, whether they are of a left-wing or a right-wing nature, because in such systems injustice is built into the very fabric of the system, but it should also critically evaluate and challenge the so-called capitalistic social order by asking questions whether a society which considers as its primary value the pursuit of material abundance and uses all its resources for the fulfillment of this pursuit, can be a just society.”

Finally, about the GKN, the Synod decided:

Following many hours of discussion in Advisory Committee, the RES agreed without debate in plenary session that the Reformed Churches in the Netherlands (GKN) had exercised discipline in the case of Dr. Herman Wiersenga, whose views on the atonement were found to be without biblical warrant. At the same time the Synod expressed its regrets that the GKN had not restricted Dr. Wiersenga from expounding his “impermissible” views in his official work. The Interim Committee had reported that in their opinion the GKN had “faithfully” exercised discipline in the case, but the Synod substituted for this the word “officially.”

In the case of Prof. Harry Kuitert, whose views on Scripture are currently being studied by the GKN Commission on Church and Theology, the Synod took note that the case is still in process and that a report on the matter would be published in the coming months.

The quotations above came from the R.E.S. News Exchange of Aug. 12, 1980. Though the report in thatNews Exchange is very brief, one does receive the impression that the R.E.S. is concerning itself increasingly with social issues—while papering over the doctrinal disagreements which persist. 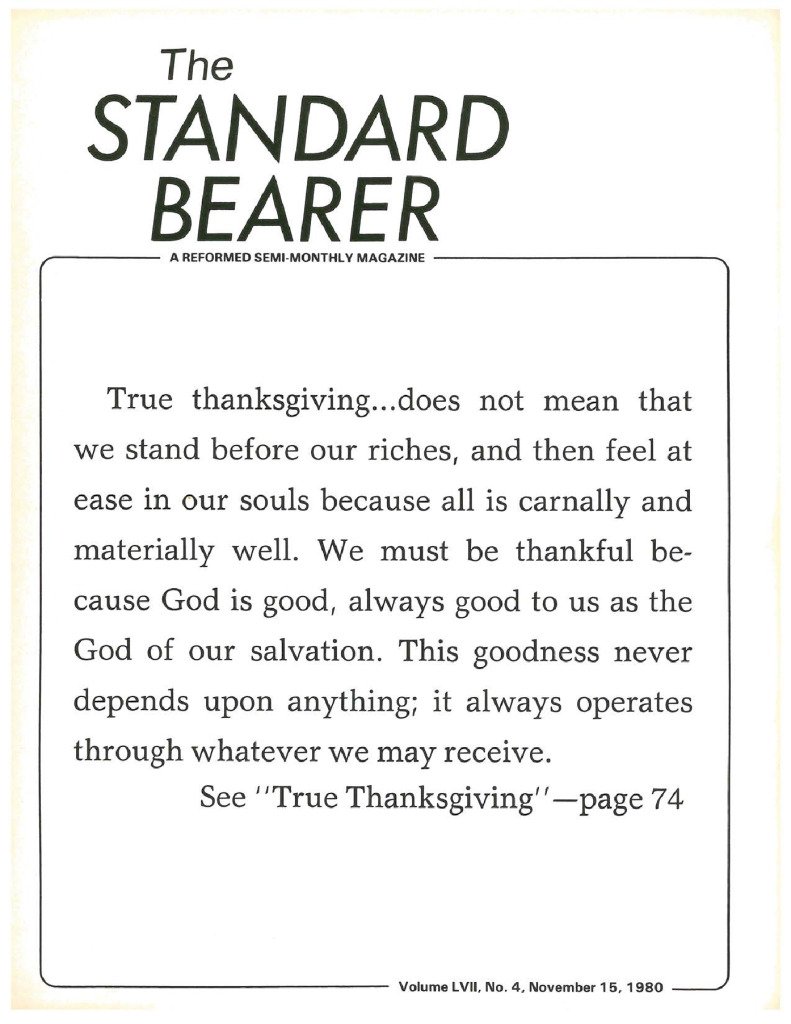