A number of weeks ago I presented in this column an article concerning the translation of the word “porneia” as given in the New International Version of the Bible. The King James Version translates the word invariably as “fornication.” But the NIV states in Matthew 5:32 (andMatt. 19:9): “But I tell you that anyone who divorces his wife, except for marital unfaithfulness, causes her to commit adultery, and anyone who marries a woman so divorced commits adultery.”

I have not received any response to date from the committee which translated the NIV concerning this problem. I have received correspondence from some who believe that the NIV has many other major flaws in translation. Perhaps at some future date I could point these out. However, my concern now is that Rev. E. Palmer, executive secretary of the NIV, did respond to the Banner in their “Voices” concerning this problem I presented:

In Pressure Points Mr. Neal De Mey has on two occasions appealed to the NIV translation of

It seems to me that this is important enough an issue to set the record straight. By “marital unfaithfulness” we NIV translators did not think for a moment of anything other than sexual immorality. It was not our intent at all to suggest that a person could legitimately get a divorce because the marriage partner was not faithful in such things as keeping house or supporting his family.

We could have said equally as well: “anyone who divorces his wife except for sexual immorality and marries another woman commits adultery.” And if our translation caused Mr. De Mey to misunderstand

, maybe we should change. But, on the other hand, we thought that the term “marital unfaithfulness” was universally understood as “sexual immorality” and that it was a more delicate way of saying what we meant. . . .

First, let me say that I am pleased that Palmer, executive secretary of the NIV, noted the problem of the translation of the NIV as presented in De Mey’s article. It is a welcome suggestion too that Palmer makes when he states: “If our translation caused Mr. De Mey to misunderstand Matthew 19:9, maybe we should change. . . .” I sincerely hope they can change this — and do in the future.

However, I find it highly strange that the committee believed that ” ‘marital unfaithfulness’ . . . was a more delicate way of saying what we meant. . . .” We live in an age of outspoken sexual frankness. Even our young children encounter references to sexuality and sexual deviations of every sort whenever they read the newspaper, hear the radio, observe TV, read books, etc. Has the committee “buried its head in the sand”? It is absurd, to my way of thinking, to attempt to find a “more delicate way of saying” fornication.

But I am surprised at another of Palmer’s statements. He claims: ” . . . we NIV translators did not think for a moment of anything other than sexual immorality.” And again: “But, on the other hand, we thought that the term ‘marital unfaithfulness’ was universally understood as ‘sexual immorality.’ ” Now I can hardly imagine that Palmer and the 100 translators which worked on this project, would deceptively make this claim. But at least it does reflect great naïveté. Palmer, a Christian Reformed minister, should know well that many exactly want to pervert the word “fornication” into “marital unfaithfulness” in order to justify divorce on other grounds than adultery. The Christian Reformed Synod of 1973 had a study report on “Marriage” which proposed exactly this sort of thing. When the Synod rejected this proposal and appointed a new study committee, that committee commented as follows in their report to Synod of 1975 (pp. 497-8):

A. The Specific Meaning of Porneia in

a.The study committee in its report to the Synod of 1973 has argued that “adultery” covers “all the ways in which infidelity in marriage can take place” (Acts of Synod 1973, p. 598). Again: “At this juncture the committee re-emphasizes that adultery must be viewed in its broad meaning as marital infidelity — the breaking of fidelity which can happen in many ways” (p. 600). Out of this background they approach

and 19:9 They distinguish porneia (fornication) from moicheia (adultery) and assert that in Matthew it is the Greek translation for the “some indecency” of

This itself causes problems when the passage is read to make adultery a ground for divorce: it talks of fornication (p. 601).

A bit later the committee states: “at present many exegetes tend to consider porneia distinct from adultery in that it refers to infidelity within marriage. If that is true, the interpretation given above would be strengthened” (p. 601). Again, in the same paragraph: “In any case, it is not possible to limit fornication to physical infidelity” (p. 601).

We confess that we do not understand everything that is stated and claimed in the last full paragraph on page 601. For example, we do not know what they mean when they say, “He is not referring to such cases of fornication in this instance.” And we do not know who the “many exegetes” are who are alleged to be tending to consider porneia as referring to infidelity within marriage. But the main drift of their argument is clear.

b.On the other hand, the Synod of 1973 did adopt one part of the report of her advisory committee in which the committee offers the following as one example of the fact that Part II of the study committee’s report is not in its entirety in accord with the biblical teaching on marriage (Acts of Synod 1973, p. 59): “whereas the study committee maintains that the Greek word porneia as used in

and 19:9 has a broader meaning than illegitimate sexual intercourse we question whether that interpretation can be substantiated from Scripture.” The advisory committee (and, therefore synod) did not say specifically what they thought porneia specifically means in

and 19:9 but the implication seems to be that they regard porneia to mean “illegitimate sexual intercourse.” This is the position of many exegetes, though there is some variety on whether and to what extent porneia here should be limited to adultery or also to include pre-marital unchastity.

In The Outlook, February 22, 1980, there is presented an interesting “letter to the editor” which introduces a new church with the above name:

On November 19, 1979, a small group of people, formerly members of the Bethel Christian Reformed Church of Listowel, organized themselves as a Church of Jesus Christ. This action was taken as an act of faith, believing that their Lord, the Lord of the Church, had called them to this action. The new congregation consists of six families, fifteen confessing members and nine members by baptism.

. . . In organizing, this congregation reaffirmed its commitment to the three Reformed Confessions: the Belgic Confession, the Heidelberg Catechism, and the Canons of Dordt. As its Rule of Order, it has adopted the Church Order of Dordt as it was held by the Christian Reformed denomination prior to the revision of the 1960’s . . . .

The congregation does not intend to be a competitive body in the midst of the churches. It intends rather to be a living body of Jesus Christ, positively endeavoring by His grace to serve Him and worship their covenant God, Jehovah.

Why did this happen? It happened simply because these members of the Church of Jesus Christ were led by the Spirit to a conviction that the fight against the world is an active one and every congregation and each member is engaged in that battle; and because of conviction that events have transpired, actions have been taken in the Christian Reformed denomination which, in their conviction, will eventuate in a loss of the leading of the Word of God. It is their prayer that there may be that kind of turning which will make this prophecy untrue. . . .

The name was chosen by the membership of the congregation to indicate its desire and endeavor to remain true to the faith once for all delivered to the saints. Yet it indicates a meaningful expression of continuing as Christian Reformed, realizing that the real basis of unity is the three forms of Unity: the Heidelberg Catechism, the Belgic Confession, and the Canons of Dordt. The choice arises out of a conviction that the Christian Reformed denomination presently is no longer true to its history and name. . . .

The new congregation was organized under the direction of Rev. Harry Van Dyken who recently left the ministry of the Christian Reformed Churches. We know nothing further of this little congregation. However, I would hope they will consider one suggestion I wish to make. The Protestant Reformed Churches too were once Christian Reformed. They were forced out of the parent body because of the “common grace” issue with its “free offer of the gospel” and its “grace” for the reprobate. Whether this group were to agree with the stand of the Protestant Reformed Churches on the issue or not, at the occasion of this new beginning, it would do well to review also these early decisions to see if indeed (as we have claimed all along) this was the point at which the C.R.C. began its departure from the old and true doctrines of the Reformed churches as taught in Scripture. Let them consider, for example, how many recent C.R.C. decisions approving movie attendance and dancing, etc., were in part based upon the argument that the doctrine of “common grace” allows for this. If they desire more material to study on this whole issue, we would be happy to provide that.

Homosexuals in the Reformed Churches of the Netherlands

In Centraal Weekblad, of 15 December 1979, Klaas Runia comments on the “far-reaching” decision of the Synod of the Reformed Churches in the Netherlands (GKN) that homosexuals are to be accepted unconditionally as full members of the church.

The Synod’s study committee reported that it had failed to resolve the deadlock of two apparently irreconcilable positions in the committee. There strategy, and pastoral considerations. Some maintained that Scripture gives normative guidelines on homosexuality and that extensive dialogue with a wide variety of people within the church is necessary. They had reservations about homosexual conduct. Others held that Scripture gives no revealed command in the matter but only a general mandate to love. Therefore Synod’s only choice was to side with a minority that is the victim of discrimination. After discussion, the Synod opted for the second position.

So — these evils come ever closer to home 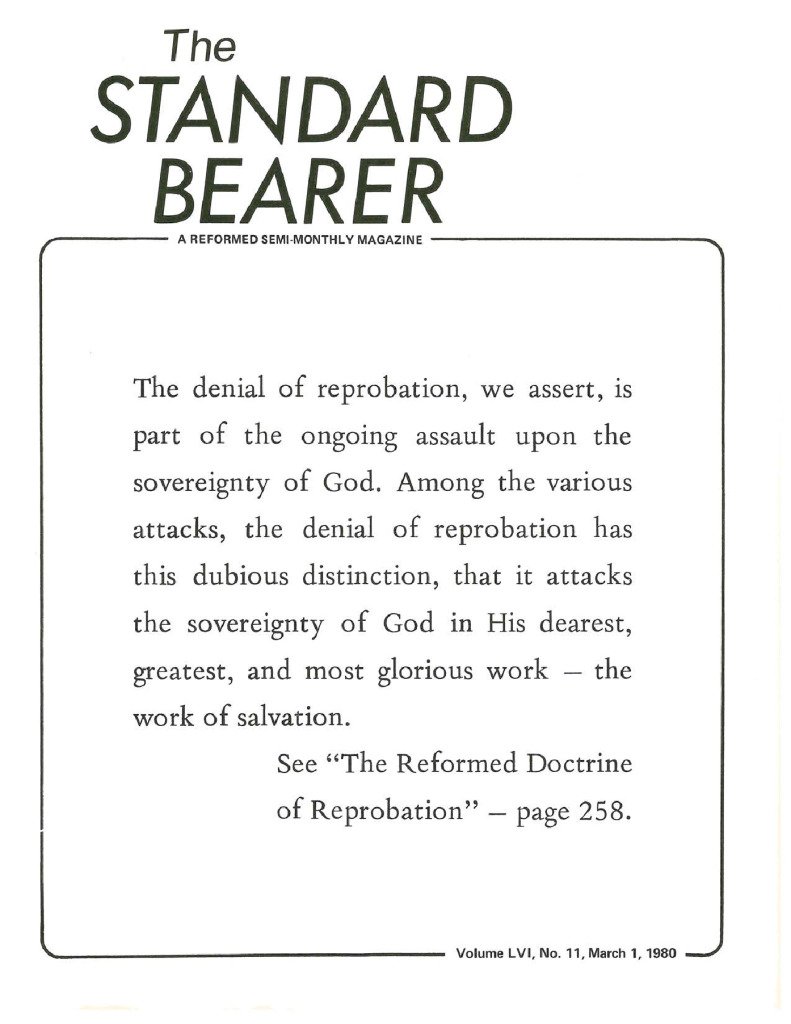