EVIDENCES OF DOCTRINAL DRIFT IN THE NETHERLANDS

In a couple of past issues of Calvinist Contact, the editors included a series of quotes from various Dutch papers which had been brought together and which show how far the Gereformeerde Kerkenhave fallen into apostasy. These quotes show as clearly as anything can that there is, among the leaders of the Gereformeerde Kerken, almost no evidence of the reformed faith left.

The Bible is an ancient Oriental description of history which one should not expect to be absolutely exact.

The snake in Paradise, Balaam’s donkey, and Jonah’s whale are the three animals to which “saving grace” is attributed, but whose stories we are not to take literally.

“but I fear, lest by any means, as the serpent beguiled Eve through his subtilty, so your minds should be corrupted from the simplicity that is in Christ”) In

the apostle Paul is limited by his own horizon. The unsuspected witnesses have merely adjusted themselves to the opinion of their contemporaries, or they have said so in their ignorance.

Paul has read the creation story regarding the duality and the individuality of man and woman through colored glasses.

Professor Kuitert, April 20, 1963, at the Conference of Christian Scientists:

is a story borrowed from the Babylonian myths. God’s creation has never began (sic) “good” from the beginning.

is probably not a record of the facts. (as reported in the Netherlands Dagblad”)

Professor Kuitert, Oct. 5, 1966, in a meeting of the Christian Pedagogical Studies Centre:

There has never been an Adam and no Eve either; there never existed a Paradise that was created without sin and death.

There never was a falling into sin.

Professor Kuitert, May 13, 1966, as reported in “Trouw” on the annual Theological School Day in Kampen:

You cannot say that something really happened because it says so in the Bible. For instance, in the time of Joshua, Jericho did not exist.

Homosexuality is no sin.

When the homosexual author VanhetReve compares God with a donkey with whom he commits fornication, that is not intended as blatant blasphemy. In many respects, Vanhet Reve is a Christian author.

I wish to deviate from the doctrine of original sin.

The Bible has no authority regarding the expression of a certain concept-view of the world, nor as far as style or historical statements are concerned.

We are increasing our understanding of the fact that the real authority of the Bible lies in its contents, not in its formal authority.

Western society has to be changed radically. Its pretended values are void. Democracy is a joke. We want socialism, solidarity, creativity, autonomy, and the complete development of self. The Free University must put its services at the disposal of the oppressed and those who are without justice.

If a mother expects a child that she has not ordered, she has the absolute right to request abortion. It makes me very angry to think that society can be against that. It has nothing to do with murder. (As a doctor) I would be very generous with my approval. Professor Lever, in an interview for the NCRV, as quoted in “On the Road to Damascus” of July 1, 1969:

. . . by way of a process taking millions of years, man has evolved from dead oceans which slowly filled with algae.

There are some accounts in the gospels that have the legendary touch, as for instance, the story of the cursing and withering of the fig tree, or more so even, that of the resurrection of some dead when Jesus died. Is it not possible that certain apocalyptic words of Jesus have been dramatized in the rumor, the story passed on orally by the people?

Professor Kuitert, in “Do you understand what you read?”, page 76:

Just as little as faith requires us to call white black, against all human observation, in the same way it does not demand from us to cling to the first parents of humanity as historical figures, against all scientific evidence.

The Church, led by the Holy Spirit, has to determine what must be believed.

The Reformed community has not paid sufficient attention to the developments in Liberal (church) circles. This isolation has been terminated.

In the world in which we live now, the Gospel of Jesus can only be combined with resistance against the established authorities.

We are in a period of deconfessionalisation, and, if that process continues and expands in the Reformed (Gereformeerde) Churches, WE ARE NOWHERE.

I am not planning to prevent a separation in our churches at any price. It is important to indicate clearly where we are going. I stick with reformed Churches that continue to know what they confess. That will result in a loss of members, of people who do not see any beauty in the Reformed Confession any longer.

In addition to this collection of statements, Mr. J. VanWestenbrugge of Zwolle, Holland, who drew my attention to this material, added one remark to the Kunst-quotations:

Such is the situation among many of the leaders in the Reformed Churches in the Netherlands. May God give strength and courage to a faithful remnant to preserve the heritage of the Reformed faith.

One does not hear a great deal these days about recent and newly concocted merger plans. In a way, there seems to be a hiatus, a kind of catching of one’s breath, a period of calm and perhaps reflection before the new moves are made. This is, in part, because of the fact that the whole COCU movement (a plan to unite nine or ten major denominations into one large church) has recently been in the doldrums. Even the leaders of the plan speak pessimistically of it and of any hope to implement it in the foreseeable future.

The Southern Presbyterian Church has come to a crisis of sorts in its denominational life. For many years conservatives in that denomination have vexed their souls over the growing liberalism of many leaders who were intent on destroying the authority of Scripture and leading the Church into the devious by-ways of a social gospel. Things came to a head at the last General Assembly of that denomination. The liberals clearly carried the day on several key issues. For example, a motion to rescind last year’s liberal decision on abortion failed; a motion to withdraw from the N.C.C. failed, as did a motion to withdraw from the W.C.C. But the most important issue was a plan to alter the present boundaries of the particular synods. This issue is closely tied up with the issue of union talks with the Presbyterian Church of the north, the United Presbyterian Church. Merger talks in the past have been fruitless because liberals were always unable to gain the necessary three-fourths majority vote of the presbyteries to make a merger a reality. Apparently the move to restructure the synods is intended to do a bit of gerrymandering by empowering synods to redefine presbytery boundaries so that the necessary three fourths vote for union with the more liberal church of the north can become a reality.

Although the margin of victory was only ten votes, nevertheless, the move to restructure synods passed. And conservatives are now convinced that it is only a matter of time before a merger with the United Presbyterian Church will take place.

The result is that four conservative organizations in the Southern Presbyterian Church has joined forces to make plans to separate from their denomination to continue the Presbyterian and reformed witness which they are committed to. These four organizations are Presbyterian Churchmen United, Presbyterian Evangelistic Fellowship, Concerned Presbyterians and the Presbyterian Journal board of Directors. A committee was organized to make plans for a split and to prepare for a new alignment of denominations. The hope is that conservatives in the Northern Presbyterian Church will join them in the future and that there will be a re-alignment of denominations along theological lines—with conservatives in one denomination and liberals in the other. L. Nelson Bell, a founder and editor ofThe Presbyterian Journal and the father-in-law of Billy Graham, long associated with the conservatives in the southern church, has recently announced his resignation from the Journalbecause of his opposition to these plans for a schism. It will be interesting and of considerable importance to see what future developments are. We have, at this point, only two observations to make. One is that it is our earnest hope and prayer that the conservatives will see that at the bottom of the drift towards modernism and liberalism lies the church’s long commitment to Arminianism and that in their efforts to reform the Church they will rid the Church also of all vestiges of Arminianism and return to a genuine Calvinism which is according to the Scriptures. Otherwise their movement will come to naught. The second is that we sometimes get the impression that many leaders in the conservative movement are moving slowly and cautiously because they are more concerned about numbers and finances than the preservation of the truth of God’s Word. Church reformation is not carried on this way. The denomination of which they are a part has clearly, as they themselves see, gone the way of heresy. Let them now either bring the issues to the higher ecclesiastical assemblies for adjudication or, without delay, separate themselves fearlessly and courageously and leave the outcome to the Lord. Then genuine reformation will result. The Lutheran Church—Missouri Synod is caught in the same tensions. The last synod meeting was, in many respects, a victory for the liberals also in that denomination. Efforts to pursue the matter of ridding Concordia Seminary of false teachers have been frustrated. Movements to return the Church to her confessional basis have been stymied. Conservatives lost badly. And so conservatives also in this denomination have formed a new organization called Federation for Authentic Lutheranism to make plans for separation. The hope is that an alliance can be formed with two small evangelical Lutheran bodies and perhaps with the Wisconsin Synod Lutherans so that Lutheran programs in parochial schools, seminaries and missions can be carried out. Already several congregations have left the Missouri Synod Church and it is hoped that historical Lutheranism can be preserved through the way of separation. The estimate made by some leaders is that fifty major congregations will pull out. These are harrowing times for those who are resisting liberalism. It is not easy to leave a Church which has been one’s home. The future will tell whether these movements will preserve the Church. There are several more items we intended to discuss. This will have to wait until our next issue. 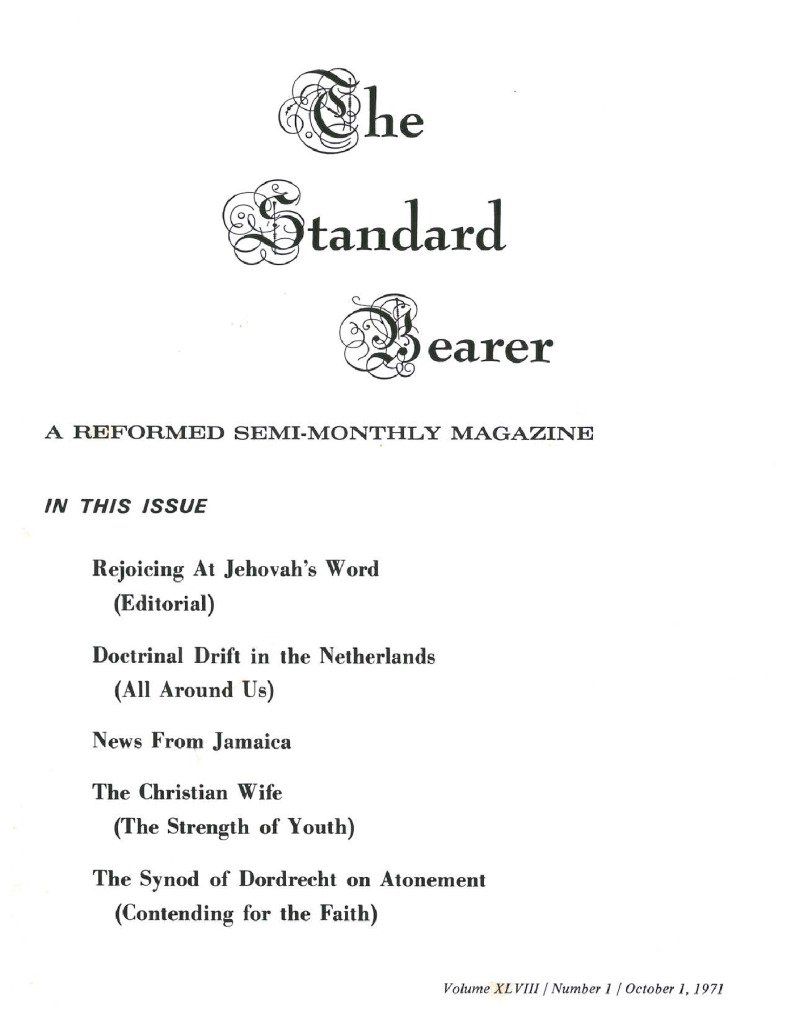