Many among them also showed that this was their mandate from their Churches and also from the States of their Provinces. This division of judgment and advice constituted a new obstacle to the National Synod. For those who up to this time had been against the convening of the Synod, eagerly grasping this opportunity, worked in every way to the end that the convening of the Synod, although promised, might be prevented. In this gathering the other Professors and Ministers pleaded with Arminius most earnestly that he would reveal to them, his fellow ministers, freely and fraternally what he had against the doctrine expressed in the Confession and the Catechism. They promised that they would be diligent to give him full satisfaction. They promised that he might be reconciled with his colleagues under honorable conditions, and pleaded that they might from now on live peaceably. And they promised that they would say nothing of that which he would reveal outside of this meeting, if reconciliation were achieved. He, on the other hand, said that this was not advisable for him; and he claimed that he was not bound to do this, seeing that this gathering was not called for that purpose.

During the following summer, when they held the annual Synod of the South Holland Churches at Delft, Uitenbogaard was admonished to give account to Synod of the reasons why, in the giving of advice concerning the manner in which they would hold the National Synod, he had sided with Arminius and had differed with the other Ministers. The intention was that Synod would consider these reasons and pass judgment on this matter. Uitenbogaard answered that he was accountable only to the States, and not to the Synod. Having been requested to state what he had against the doctrine contained in the Confession and the Catechism of these Churches, he answered that it did not appear advisable to him to do this in that gathering, and that he was not prepared to do this. At this Synod inquiry was also made whether, according to the decision of the preceding Synod, any objections or comments concerning the Confession and the Catechism were handed in to the Classis. Then the Delegates of each Classis answered that almost all the Ministers in the Classes had testified that they had no objections against the adopted doctrine, but that those who testified that they had some objections had not been willing to make them known, either because they said that they were not yet ready, or that they did not deem it advisable. On this account, the Synod again decided to order them anew that they, without any excuses, refusal, and postponement, should immediately reveal all the objections which they had against the adopted doctrine, each one in his own Classis.

It also became clear at the Synod that in every way the disagreements in the churches were increasing greatly. It became plain that young men, coming from the Academy of Leiden and the instruction of Arminius, having been called to the ministry of the Churches, when they were examined, hid their views by speaking ambiguously; but, having been admitted to the ministry, they immediately stirred up new disputes, stood for new ideas, and boasted that they had various objections against the adopted doctrine. It became manifest that in the Classes and Consistories bitter disagreements and disputes concerning many points of doctrine arose among the Ministers. It also became clear that among the people themselves, to the great damage and disturbance of the Churches, various wranglings and arguments concerning the doctrine were heard. Yea, the beginnings of schisms were noticed. Further, it came out that the Ministers who were siding with Arminius often secretly held various meetings where they laid plans concerning the advancements of their doctrinal views. And it became plain that the people everywhere were becoming more and more divided. On this account, the Synod, judging that the remedy for this evil might no longer be postponed, and seeing that the hope of gaining a National Synod was very uncertain on account of the divergence of advice and judgments, decided, upon the advice of the Delegates, to request of the States of Holland and West-Friesland that from the two South and North-Holland Synods a Provincial Synod might be authorized at the first opportunity for the quieting and removal of these difficulties (as had been done before in similar difficulties). The Deputies of both Synods showed these daily increasing difficulties thoroughly to the States, and requested the immediate convening of this Provincial Synod for the removal of these difficulties. But although the Delegates, September 14, had given great hope, nevertheless they were not able to obtain a Provincial Synod, due to the fact that there were negotiations under way with the enemy concerning a truce, and the States, being busy on this account with very important matters of the Republic, had not been able to consider these ecclesiastical matters. Meanwhile Arminius, seeing that the Churches persisted in trying to resolve matters through lawful ecclesiastical judgment, wanted to escape this trap; and through requests to the States, April 30, 1608, he managed to get his case treated by the Counselors in the High Council by politicians (in distinction from ecclesiastics, HCH); and on May 14, Gomarus was ordered to appear before them in conference with Arminius in the presence of the Ministers who recently had been in a preparatory gathering from South and North-Holland. The Deputies of the Churches, having understood this, again requested the States of Holland and West-Friesland that the Provincial Synod might be authorized instead of this conference before the High Council, in order that at this Synod they might take cognizance of and pass judgment concerning this ecclesiastical matter. Their reason was that ecclesiastical persons, experienced in these things and lawfully delegated by the churches and empowered to pass judgment, should deal with this matter. The States merely answered that to take cognizance of such matters was enjoined upon the High Council, and that judgment concerning these matters would thereafter be left to the Provincial or National Synod. 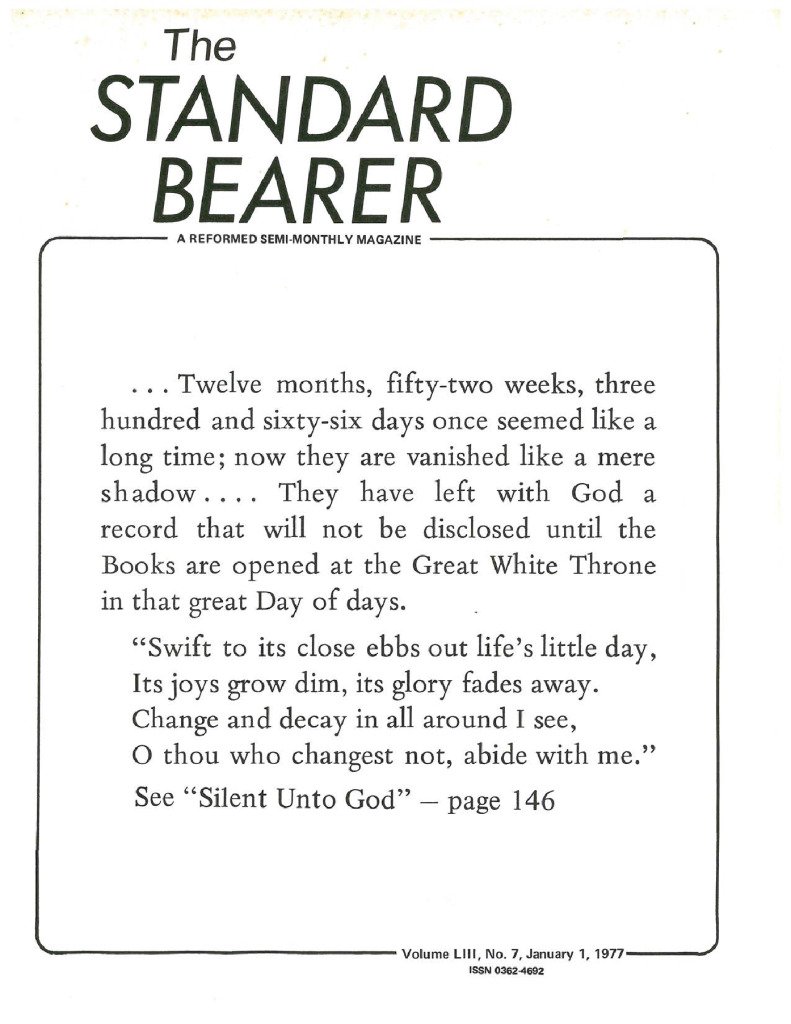