From an aged sister in Grand Rapids comes the following question:

“Here I come with a question, rather old-fashioned in nature; but to me it is always of importance.

“Voting time is again around the comer, and the question came up whether women should vote. About 45 to 50 years ago we did not trouble ourselves about it very much. It was simply ‘no’ on the basis of Scripture. But today it is different. It is surmising how many of our ladies vote. Our discussion led to many pro’s and con? The pro’s stood firm in their conviction that a Christian woman should take part in elections and express herself in such important decisions, show deep interest in her country, be a good citizen and be patriotic. Besides, this was our Christian duty. Well, the con’s protested that on the basis of Scripture a woman has no right to own this power because her task as woman is so different. The power lies along a different path, to strengthen the family ties, home environment, teaching and rearing children, etc. Of course, we realize that times have changed. We do not have a King Nebuchadnezzar, who can demand people to bow before a golden image; nevertheless the prince of this world grasps every opportunity to blind God’s people to worship him. The principle is the same. And what has resulted of all this trampling under foot of God’s wonderful purpose with the creation of woman? All this women’s liberation—equal rights—women in office in church and state. By running to the voting booth are we really showing ourselves to be of a different, new principle? Or do we agree with them in their ungodly way?

“Well here is my question. And will you give your candid opinion as to what Scripture teaches us. Should a Christian woman partake in voting, either in church or in political affairs?”

First of all, let me share a secret with our readers. This question comes from the Holland Home in Grand Rapids. And it is evident, I think, from this letter that at the Holland Home they can still have some rather lively discussions about things, and discussions also about worthwhile subjects. Mind you, the sister who wrote me is in her 80s!

In the second place, I do not think that the questions raised here are so very old-fashioned. Certainly, the question concerning woman suffrage in the church is not an old fashioned question. In our own churches it is not a question at all: both the offices and voting are limited to male, confessing members. But in other Reformed denominations the introduction of woman suffrage is of comparative recent date. Moreover, the question of women in office in the church, which is very closely related, is a very current subject. In the Netherlands, in the’ Gereformeerde Kerken women have already been admitted to office in the church. At present there is a very lively discussion going on concerning the question of women in office in the Christian Reformed Church in this country. A synodical committee has already advised that there is no principal objection. And if this position is adopted, it can only mean that in due course the practice of admitting women to office must necessarily follow. I take it that most of our readers are acquainted with the various passages of Scripture involved in this discussion. And it is not my purpose to discuss them at this time. I only wish to point out that one’s fundamental view of Holy Scripture is closely connected with this entire question. If the Scriptures have a time-bound character—and I refer now particularly to the Scripture passages in question in connection with this subject—then it can also be successfully argued that the exclusion of women from the offices in Christ’s church, while it may have been valid in another day, is no longer valid today. We do not hold to this position, however.

That brings me to my third remark, namely: that historically the entire movement for woman suffrage and women in office, both in the churches and in the political realm, has gotten its impetus from the worldly and thoroughly ungodly and rebellious “women’s liberation movement.” And then we must remember that while, of course, the so-called women’s lib movement has had more publicity and has set new goals for itself in recent times, nevertheless that movement itself is not of recent origin. It was the movement for the liberation of women (and personally I believe that the word liberation is far too good a word for this) that was behind the struggle for woman suffrage already many years ago. And to me, this would be sufficient reason to condemn woman suffrage. It is a movement that is of the world, and therefore a movement with which the people of God should have nothing to do. I think it is evident from various remarks of my questioner that she senses something of this also; and I believe that my questioner is quite right in this respect. Moreover, I do not believe that you can separate successfully the various items involved in the so called women’s lib movement. Inevitably, the trend will be that if you accept their claim to woman suffrage, you will be swept along in the tide and will be compelled to accept all the many other claims of this movement as well.

Involved in all this is the entire teaching of Scripture concerning the God given position of the woman, as my questioner also suggests. A passage such as Eph. 5:22-24 is pertinent: “Wives, submit yourselves unto your own husbands, as unto the Lord. For the husband is the head of the wife, even as Christ is the head of the church: and he is the Saviour of the body. Therefore as the church is subject unto Christ, so let the wives be to their own husbands in every thing.” I Tim. 2:12-15 is also pertinent: “But I suffer not a woman to teach, nor to usurp authority over the man, but to be in silence. For Adam was first formed, then Eve. And Adam was not deceived, but the woman being deceived was in the transgression. Notwithstanding she shall be saved in childbearing, if they continue in faith and charity and holiness with sobriety.” 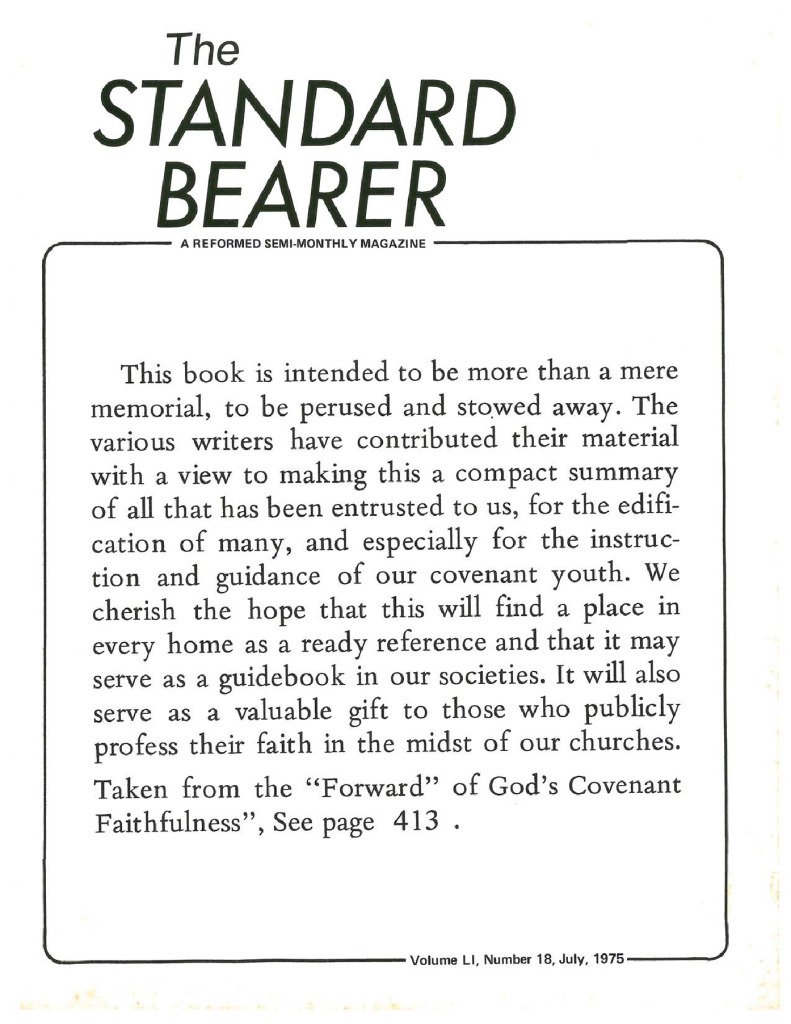