About Retirement of Ministers (continued)

About Retirement of Ministers (continued)

The final question is: how can we determine when a minister should retire? The Church Order speaks of being “rendered incapable of performing the duties of their office.” Hence, the answer is: a minister should retire when he becomes incapable of performing the duties of his office. This is a rather simple matter to determine, of course, in those instances in which a minister is obviously physically incapacitated. In other instances, however, that “incapable” is a bit more difficult to interpret. When is a man incapable of performing the duties of his office by reason of age? Does he have to be so feeble that he cannot mount the platform? Must he be so full of infirmities of body and mind that preaching becomes an obvious impossibility? I do not believe this. I believe that especially in our day, with all its pressing problems and conflicts and its busy life, our congregations need alert, vigorous ministers who have understanding of the times, who are capable of intense, vigorous, fresh preaching, who are capable of the same kind of instruction in catechism and societies, who are capable of positive leadership and guidance, and who are capable of alert and vigorous pastoral care. The minister himself must, in the first instance, confront the question whether he is still capable of such a ministry; and if he is not, then he should honestly face the necessity of retirement. There is no shame in that—especially not when a minister has worked hard and long all his life and has been through the mill of conflict. And our churches can and will honorably provide for such men, and also continue to esteem them and appreciate them as long as they are among us. And if a minister should fail to see his own incapability, then his consistory and congregation will do him and themselves a favor by helping him to see it.

Can any guidelines be suggested according to which this question should be answered? I believe there are such objective guidelines, and I will suggest a few obvious ones. They are guidelines for the minister himself, first of all.

2. Is the preaching intense, vigorous, sharp? Or is it rather hum-drum and matter-of-fact? Is the congregation swept up and carried along in the preaching, so that it becomes intensely involved and interested? If a minister has lost the physical and mental stamina and vigor to preach in this intense manner, and it preaching becomes a chore that has to be gotten out of the way twice a week, it is time to quit.

3. Does the preaching break new ground as far as its subject material is concerned, or does it cover ground familiar to all and which has probably been covered umpteen times before? Is the subject material such that the sermon is just about predictable to anyone reasonably familiar with Protestant Reformed preaching? If the answer is Yes, this is an indication of lack of exegetical initiative and development.

4. Does the preaching address itself to current needs, current dangers, current theological and doctrinal developments and trends, and does it do so pertinently? If it does not, this is an indication that the minister is not keeping up in his reading and studying.

5. Does the minister continue to prepare well and thoroughly for the catechism classes and for Bible discussion in the societies? Or does he give this preparation a lick and a promise, expecting to bank on his experience and his backlog of knowledge?

6. Does the minister have good contact with the young people of the congregation? Does he know them, know their peculiar problems and needs? Does he work with them and give them counsel and leadership? Or is he out of touch with them?

7. Does the minister continue to be active in pastoral labors faithfully? Or does he have no time for the sheep? Does he labor pastorally only by reaction, that is, only when confronted by some specific need or problem? Or does he know the flock intimately and labor positively and preventively?

8. Does the minister furnish good, positive leadership in the consistory? Or does he seek to avoid or to postpone dealing with problems, trying, perhaps, to get meetings finished as soon as possible?

9. Does the minister continue to do all the tasks in the congregation which he formerly did, or does he complain that he has too much work and try to escape work which would ordinarily and routinely be expected of him?

10. Is the minister willing to do his part in denominational activities, such as classical and synodical committees, etc.? Or does he decline these duties in behalf of the churches in common?

These are just a few suggestions. Undoubtedly more such questions can be raised. They are questions which are not necessarily limited in their value to ministers faced by the question of possible retirement because of age. Some careful, objective introspection and self-evaluation is good for any minister. But in this connection, I only wanted to point out that a minister should approach the entire question of whether he is or is not ripe for retirement as objectively as possible, and that there are indeed some test-questions which can be confronted. 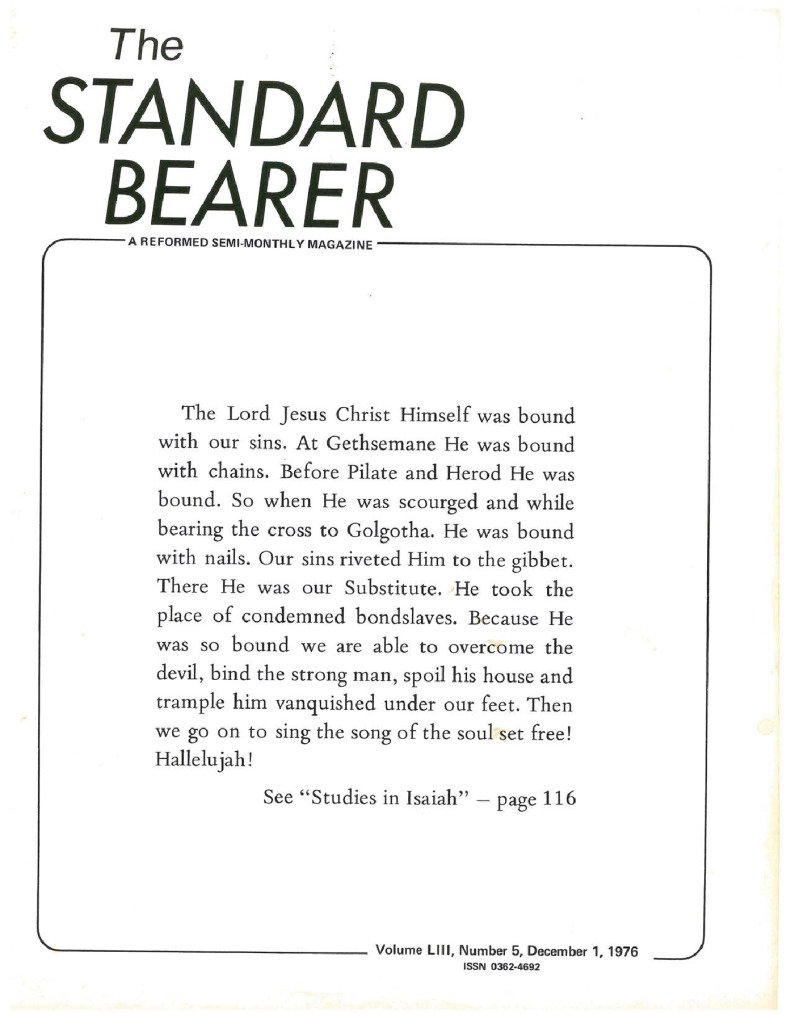